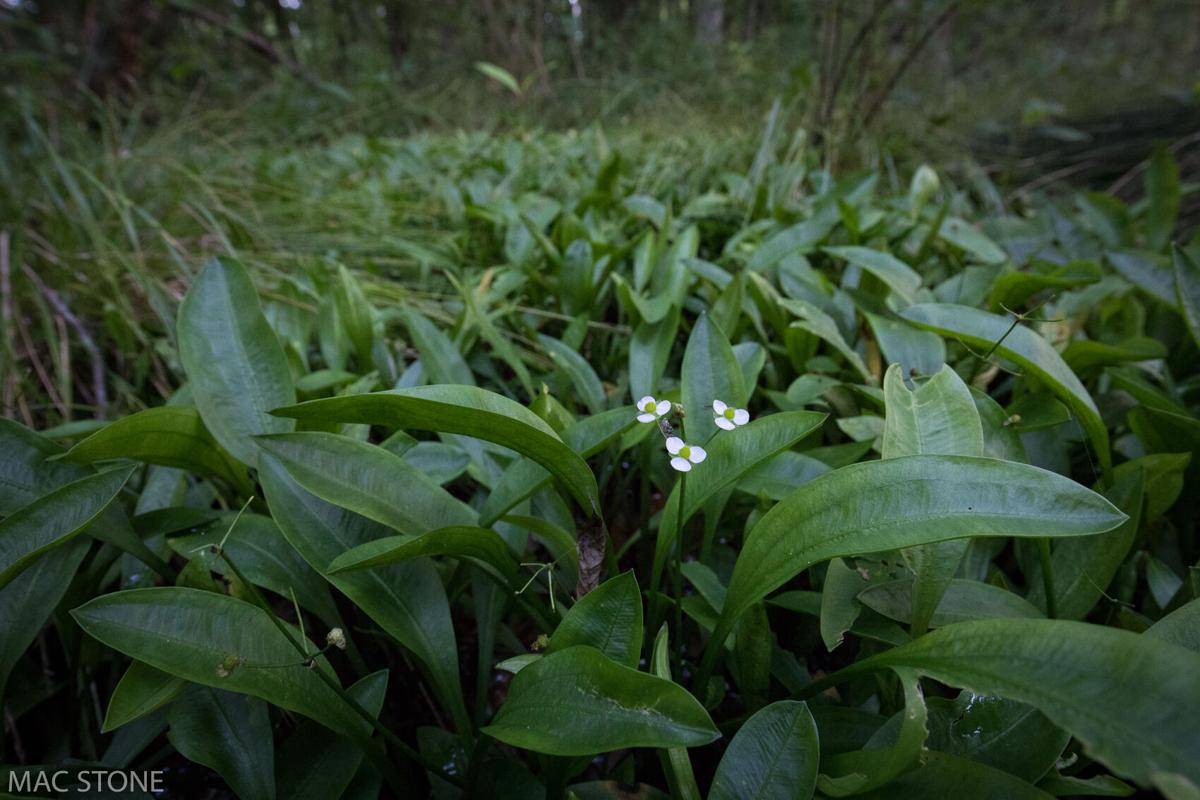 An example of federally-endangered Bunched Arrowhead plants in Greenville County like the ones found at the site of a proposed subdivision north of Travelers Rest. 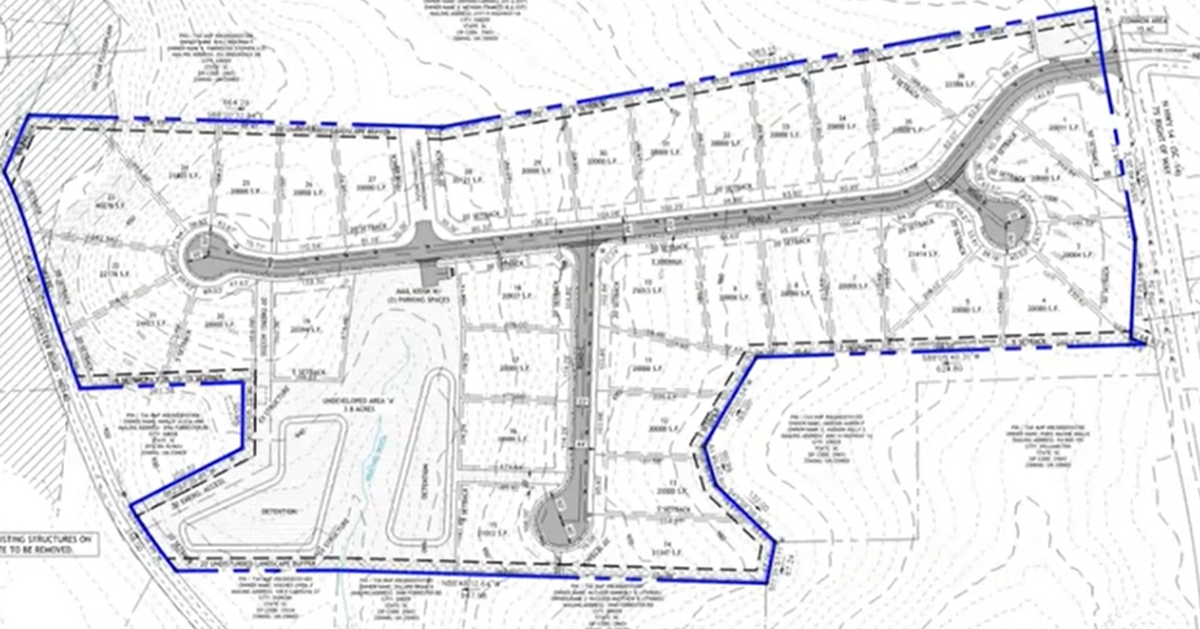 The preliminary subdivision plan for Oakvale in the Blue Ridge community shows 36 homes on 24.5 acres. 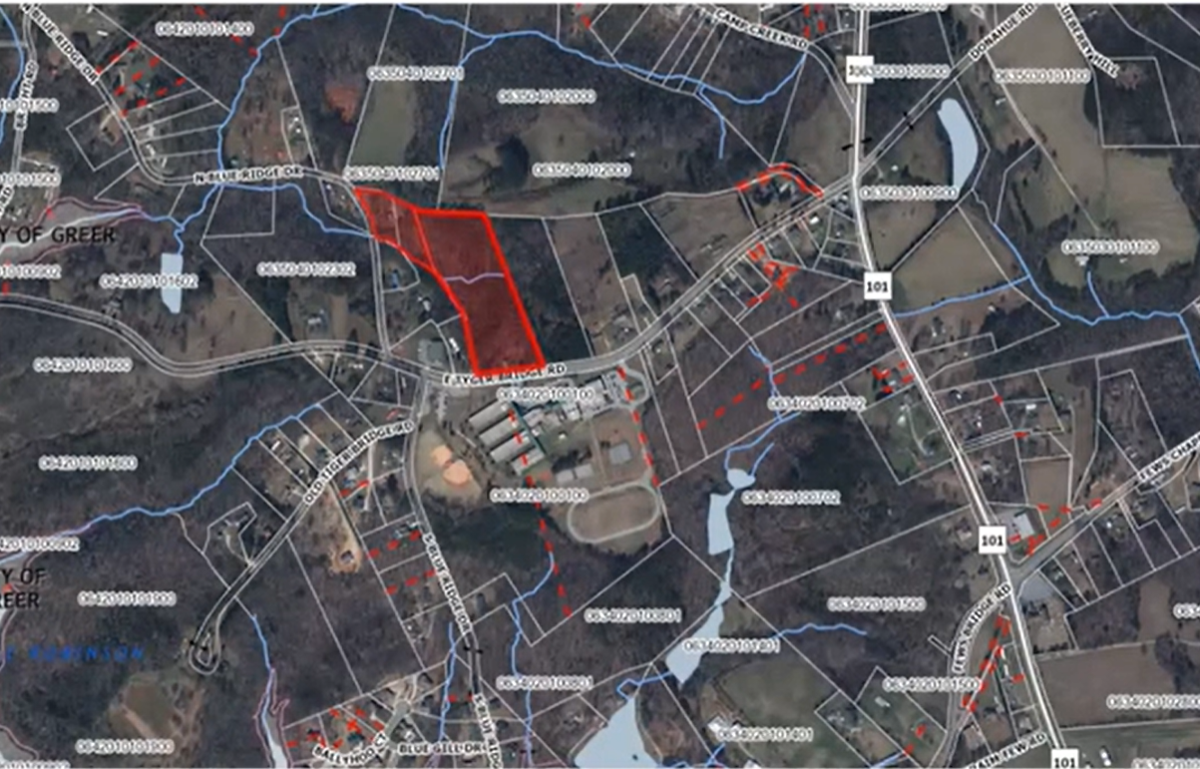 This is the location of the proposed Pebble Slope subdivision in the Blue Ridge community that the Greenville County Planning Commission recommended for denial on Wednesday, Oct. 28, 2020.

Prominent Greenville developer Jeff Randolph plans to build a 147-home community in an unzoned area along U.S. 25 north of Travelers Rest on land that is a known habitat for the rare and federally-endangered Bunched Arrowhead.

This is the fourth time in recent years a developer has proposed building on a site in the northern part of Greenville County near the Enoree River watershed in the only location in the world known as a habitat for the endangered plant.

Each of the three previous times, the project was abandoned after significant community outrage.

This time may be different.

Randolph’s company, TRG Communities, reached out to local conservation groups early in the process of creating the development plan and adjusted his subdivision plan to steer clear of a wetland near U.S. 25 where Bunched Arrowhead grows. 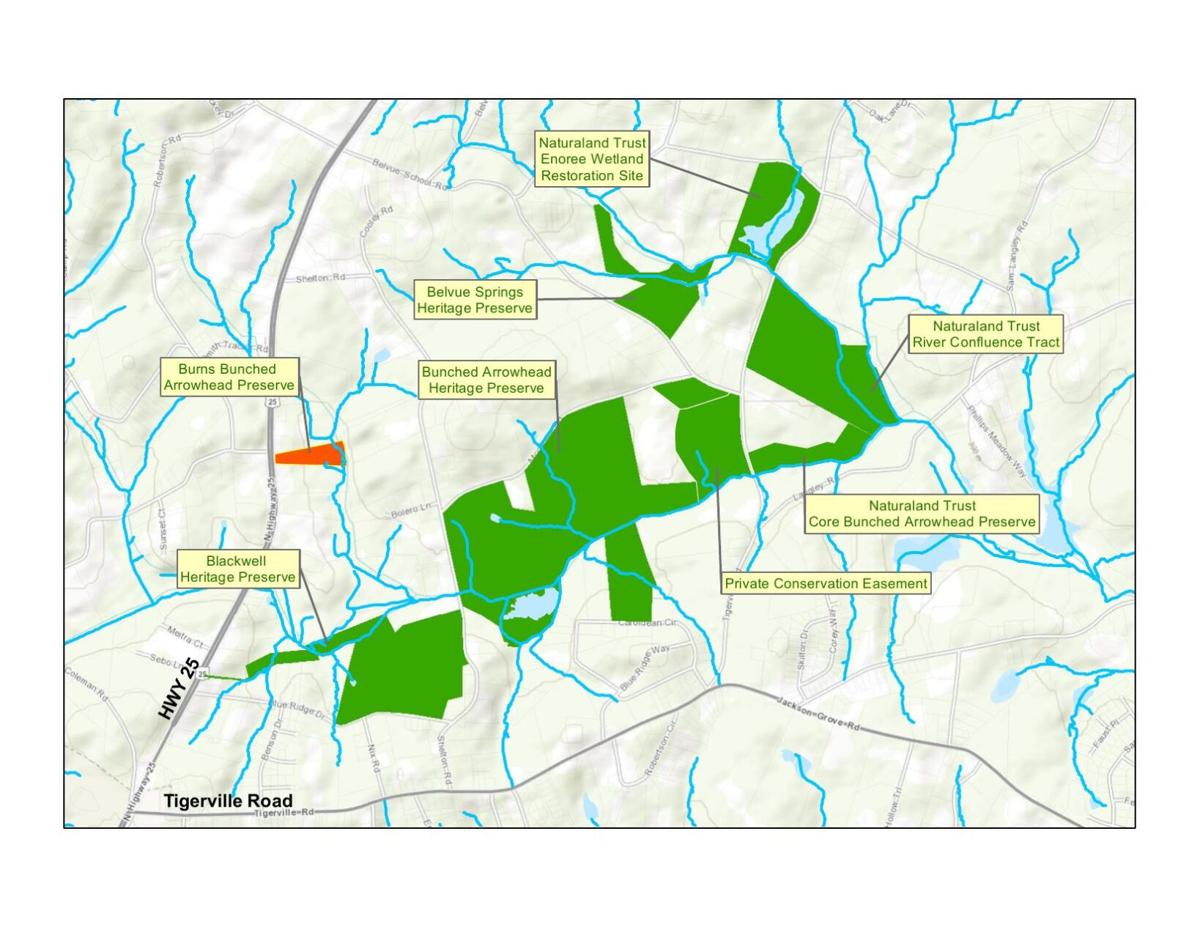 TRG Communities, which has built developments like Pendleton West and Mulberry at Pinckney in Greenville, Verdmont subdivision in Simpsonville and Carillion in Travelers Rest, presented its subdivision plan for Penrose to the Greenville County Planning Commission on Wednesday.

In a letter to the commission, Frank Holleman, an attorney with the Southern Environmental Law Center, said the developer had taken “positive and responsible steps” from other developers’ plans to build in the sensitive natural areas north of Travelers Rest.

Holleman said SELC officially remains neutral toward the development plan because he wanted to see the county place additional contingencies on the plan’s approval. The planning commission voted to approve the plan with those contingencies. Randolph said he planned to hold to the contingencies to protect the sensitive wetlands that make up the Bunched Arrowhead habitat.

The Bunched Arrowhead, Sagittaria fasciculate, is a small plant that grows 14-16 inches tall in saturated soil. It has broad leaves that grow a foot long and produces small white flowers from mid-May through late July.

It grows only in what’s known as a Piedmont Seepage Forest, one of the rarest wetland forms on earth, that emerges only at the base of hillsides in the high Carolina Piedmont at the base of the Blue Ridge Escarpment and grows only where there’s relatively clean, cool, slow-moving, shallow water, Holleman said.

Bunched Arrowhead is known to grow only in northern Greenville County in watersheds near the Enoree, Reedy and Tyger rivers and in a section of Henderson County, N.C.

Conservation groups have made inroads at protecting land in northern Greenville County, particularly with the Bunches Arrowhead Heritage Preserve and a number of other preserves and privately-owned easements nearby.

The SELC asked the developer to keep at least a 100-foot buffer from the Bunched Arrowhead wetlands, prevent stormwater flow into the wetlands, protect the area during construction and consider placing the wetlands into permanent conservation.

Randolph agreed to make further improvements to the plan to align with SELC’s recommendations and said his plan would leave at least a 140-foot buffer from the endangered plants.

The community would be designed with larger lots than required at 1.7 homes per acre and would include numerous pocket parks and a grand lawn. 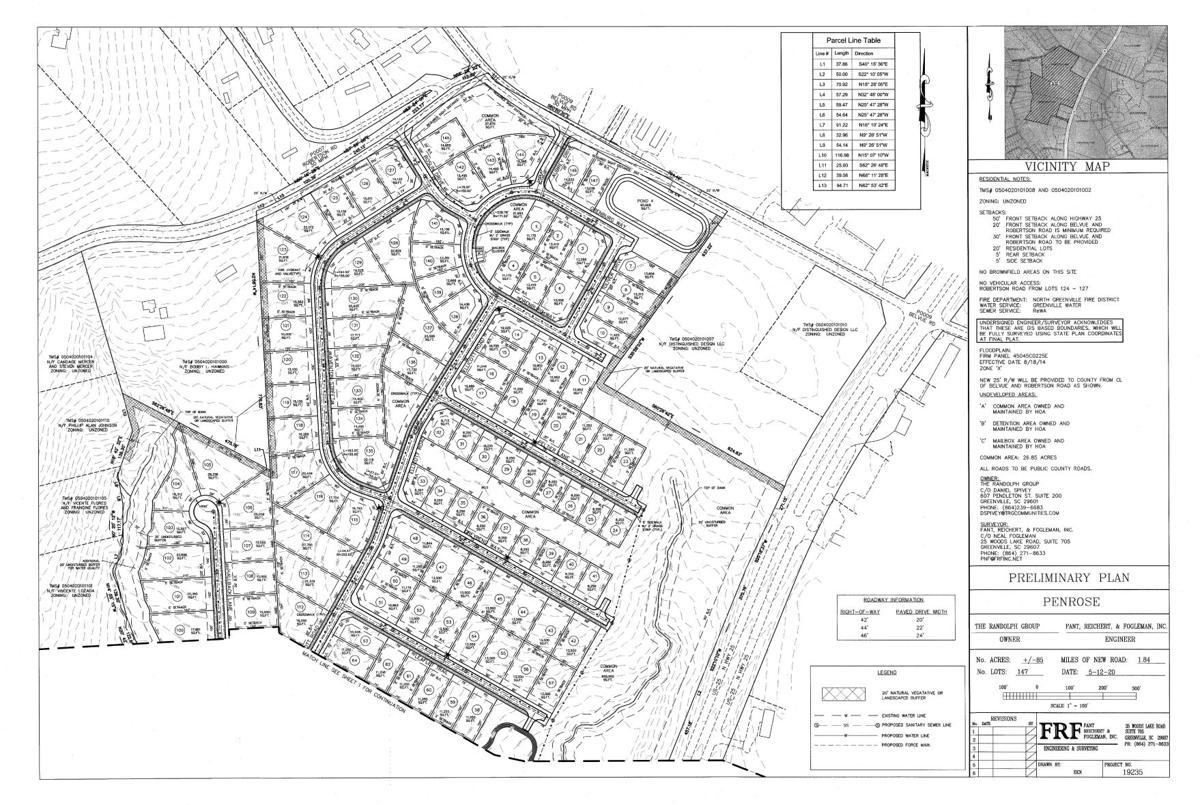 “We chose not to increase the density to keep in compatibility with the area,” Randolph said.

Randolph said the development would leave more than a quarter of its acreage as open space, not counting detention ponds.

The planning commission voted unanimously in favor of the project. Commission member Cindy Clark abstained over perceived connections to the property.

Randolph’s proposal fared better than one other proposal before the planning commission.

A developer wants to build a subdivision with 15 manufactured homes directly across from the entrance to Blue Ridge Middle School, a plan that brought strong opposition from community members concerned about traffic on an already crowded road.

“There’s a lot of people up here upset about this,” said County Councilman Joe Dill, who spoke on behalf of community members.

He called it a “bad situation” where roads frequently back up in all directions for a half mile in the mornings and afternoons.

Traffic near the school was the primary objection, brought up by both commission members and residents.

“It’s a dangerous situation for the parents, for the students,” Pittman said.

Dill said development in the area should be put off until the school district can address the traffic issues at the school.

“Hopefully the request that has come before y’all is going to throw some light on the school district and they’re going to have to do something to straighten out this problem,” he said.

The planning commission voted 7-2 to recommend denial of the project, known as Pebble Slope.

A subdivision plan that’s come before the county before and is currently embroiled in a lawsuit over the county’s development rules in unzoned areas received approval from a split planning commission.

The developer of the Oakvale subdivision wants to put 36 homes on 24.5 acres in an unzoned rural area along Highway 14 northeast of Greer.

The plan reduced the number of homes from 39 that were previously proposed after one landowner decided not to sell to the developer. The proposal would also include sidewalks because the subdivision is near Blue Ridge High School, said Waverly Wilkes, an engineer with Gray Engineering.

The court case pending against the Oakvale development rests on the county’s contested Article 3.1 of its land development regulations, which lists a number of subjective characteristics developments must meet and that environmentalists and nearby residents have used as an argument the planners should use to deny subdivision requests in unzoned areas of the county that are denser than existing development nearby.

Wilkes said Oakvale would be no more dense than six other developments within three miles of the site.

“The county can’t have Article 3.1 on the books and not apply it,” said Michael Corley, an attorney with the South Carolina Environmental Law Project.

A lawsuit to uphold Article 3.1 is pending against Oakvale, he said.

The county hasn’t scheduled a hearing for a proposed amendment to its land development rules that would update Article 3.1. After builders and real estate associations in the county voiced opposition to the amendment over concerns it would effectively add zoning to nearly half of the county that’s currently unzoned, County Council said it would need to workshop the ordinance.

It’s disappeared since then and a petition by residents to push the council to adopt the amended ordinance has garnered 1,000 signatures, Corley said.

All of this comes as the county’s planning staff said there could be 14 rezoning requests and as many as nine subdivision plans on the docket in the next month as a backlog of plans put off during the coronavirus pandemic makes its way through the planning process.