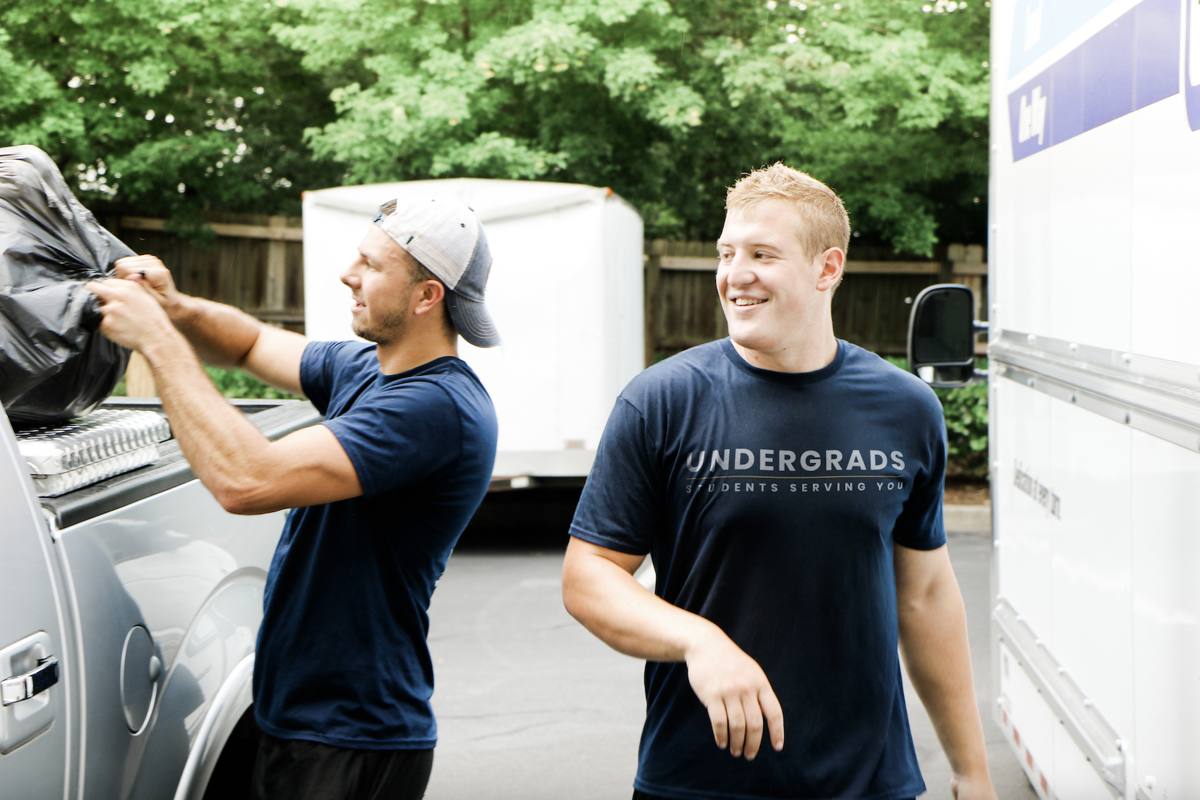 Jesse Jordan (left) and Davis Velilla work on a moving job for Undergrads, a company founded four years ago by two Clemson grads. Co-owner Thomas Mumford said the best recruiting technique for the company has been students telling their friends how much money they made for a few hours of work. 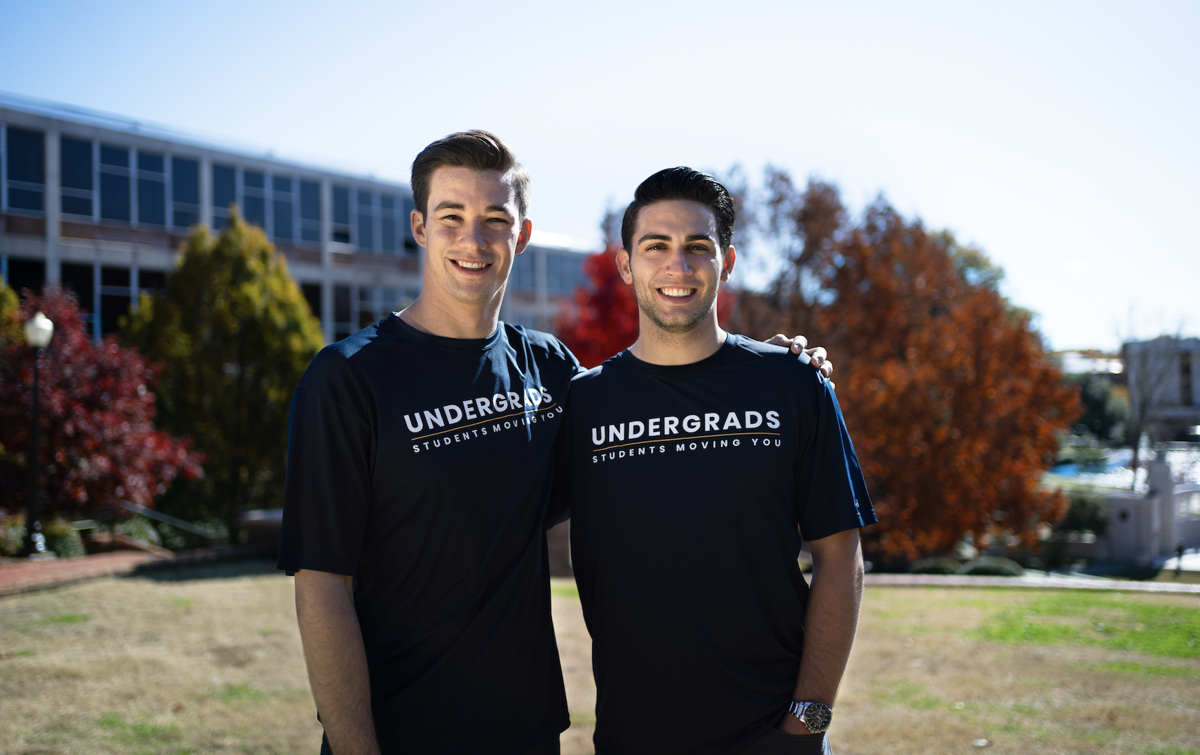 Chris Dyer (left) and Thomas Mumford started Undergrads at Clemson University as a way to make more money than typical student jobs, such as at a bar or grocery store. 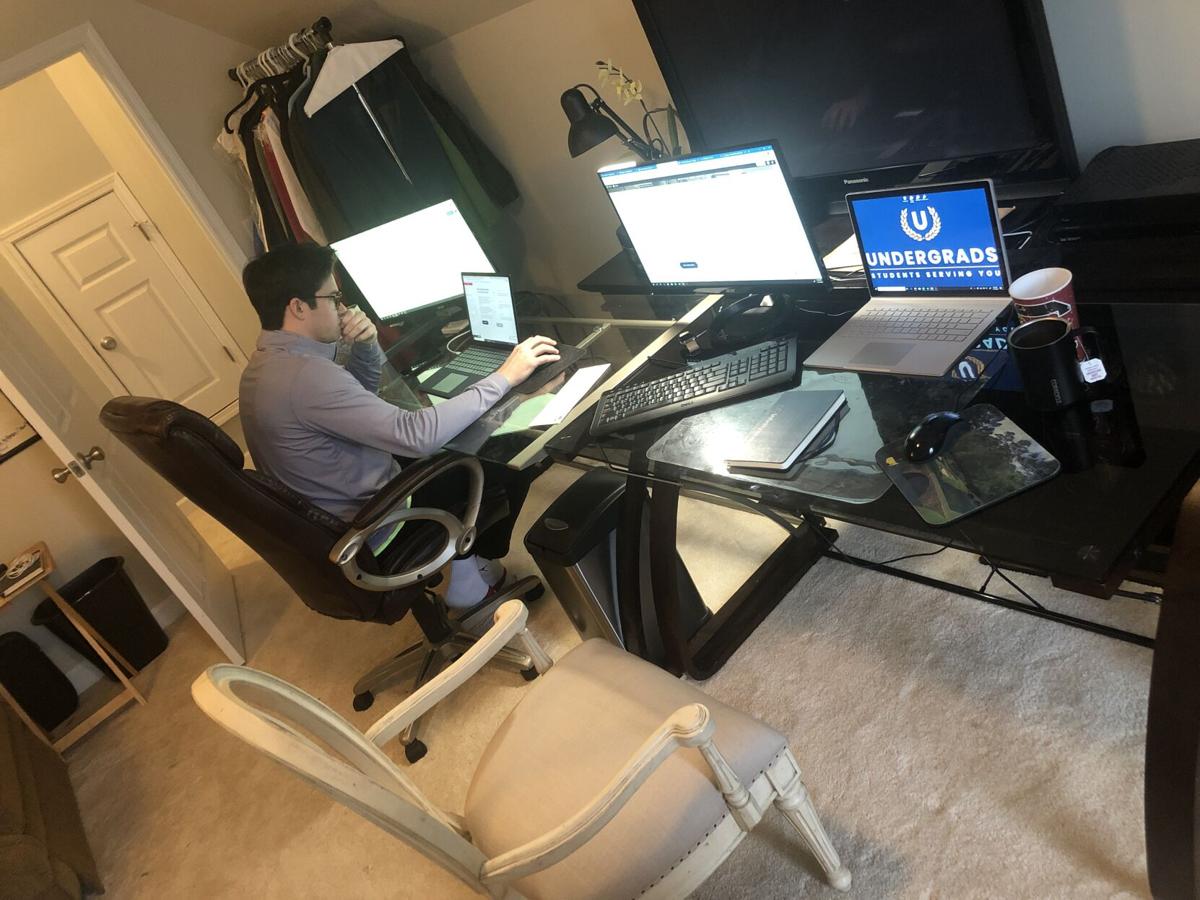 Undergrads started out of Chris Dyer's mom's attic in Columbia. The company is now in Charlotte and has 12 employees.

Chris Dyer and Thomas Mumford were self-described "broke" college students in industrial engineering at Clemson when they asked themselves a question.

"How do we make money around our class schedule and make more than minimum wage?"

The answer turned out to be a labor-only moving service, meaning the client rents the moving truck and other supplies, like dollies, and Dyer and Mumford show up for the heavy lifting. The job was perfect for college students.

Some Upstate apartments are being built in a warehouse and stacked like Legos. Here's how.

"Our combined bank accounts came out to $300 so buying a moving truck was out of the question," Dyer said with a laugh.

Undergrads has completed nearly 7,000 moves and has expanded from Clemson into eight other cities across North Carolina, South Carolina, Kentucky and Texas. With little to no costs to run the business, Undergrads claims its clients save up to 30 percent, and it can afford to start pay for its 500 student movers at $15 per hour. Average pay is $19 per hour.

The idea for Undergrads came in 2017 after Dyer's mom told them how much she paid for a recent move. They put an ad on Craigslist advertising moving services for $30 per hour and had a surprising number of requests. The boys didn't tell their moms about finding clients off Craigslist.

"We'd call our friends before some jobs and say, 'If we don't call in two hours, come find us,'" Dyer joked.

The affordable moving option took off quickly and Dyer and Mumford soon recruited friends to keep up with the jobs.

When they graduated in December 2017, they weren't ready to go all-in on Undergrads but also didn't want to leave it behind. Instead, they managed it remotely while Dyer took a job as a supply chain consultant at UPS in Orlando before moving to business operations manager at startup Corkcicle, which started with an in-bottle wine chiller. Mumford took a job at Ernst and Young in New York in its corporate venturing unit within their tax department.

While working their corporate jobs, they watched as Undergrads grew by 300 percent between 2018 and 2019. They wouldn't reveal revenue but said it has grown by 250 percent annually in the two years since then. By the end of 2019, they were ready to go all-in.

In an original office worthy of a startup fairytale, the men set up shop in Dyer's mom's attic in Columbia. For six months, they also lived with Dyer's mom and went without a salary. Now they have an office in Charlotte that hosts them and 12 employees.

Undergrads now has 500 student movers but is always looking for more as it aims to expand to three to five new cities this year. COVID-19 delayed its expansion strategy slightly but otherwise hasn't had much of an impact on the business.

"Moving isn't an option like a cleaning service," Dyer said. "If you're moving, you have to move so people waited March and April but in May, it was like a water hose that was finally unclogged."

For a few months at the height of COVID-19, Undergrads struggled to recruit students because its best strategy has been students showing up at the dorms with a wad of cash for a few hours of work, Mumford said. Movers can easily make $200 to $500 a week, while those who take the most jobs can make $1,000 per week.

Cody Lowe was a senior when his roommate invited him to tag along for some Undergrads moving jobs. He soon became a regular, taking a moving job once a day with his roommate.

"I fell in love with the fast money," he said. "It's $15 an hour to start then along with that, the potential for tips is just amazing."

"I'm making about the same amount now in a full-time job except I'm not exhausted at the end of the day," Lowe joked.

He now works as a production supervisor at Ryan Homes in Greenville. Every now and then, he still takes a moving job with Undergrads on the weekend if they need help. But more than the money, Lowe said he's thankful for the lifelong friendship with his roommate that came out of Undergrads.

"It made us a lot closer because you're going through battle with someone," he said. "Sometimes moves are really like a battle. You have to figure out problems together."

Dylan Collins, a student at UNC Charlotte, is one of 15 movers in the Charlotte area. He worked as a dog walker, barista and FedEx employee before finding Undergrads last summer. The day after he applied, he got his first gig starting at $15 an hour.

Nine months later, Collins averages two moves a day for four days of the week and has been upped to $18 an hour. But with tips averaging $20 per move, it comes out to $30 an hour, he said. Some jobs are just loading. Others are just unloading. Some are both. And some are 15-minute jobs to move a heavy object to a different room or outside.

Besides the affordability at $45 per hour per mover, Undergrads has also attracted clientele due to its reputation for quality movers. Facebook comments on the group note that the students are "kind, courteous, friendly, young, energetic and hard working." Lowe said when he and his roommate would finish jobs, clients would often say, "this was the best moving experience we've had."

Undergrads does everything from one-bedroom apartments to six-bedroom homes. One of the largest jobs to date came when they had three weeks to furnish 1600 apartments at Clemson. It remains one of the largest student housing projects in the U.S. Undergrads supplied 30 student movers each day and got it done.

Undergrads is growing rapidly, but Dyer and Mumford haven't forgotten why they started it: earning money for college. That's why they have a scholarship fund each year for student movers. In June 2020, it distributed $10,000 to students. Lowe was a recipient two years ago and said he used the money to help his mom, who refinanced her house to foot his education bill.

"Moving supported us through college and we want to give others the same opportunity," Mumford said.

Now in the company's fourth year, the two Clemson grads say everything they have learned has been through trial and error. The first few years were "brutal" having to learn everything the hard way, from how to not scratch floors to how to the best way to protect furniture, Mumford said.

"That's how we have a working company now where things go right and have 1,500 five-star reviews," he said.