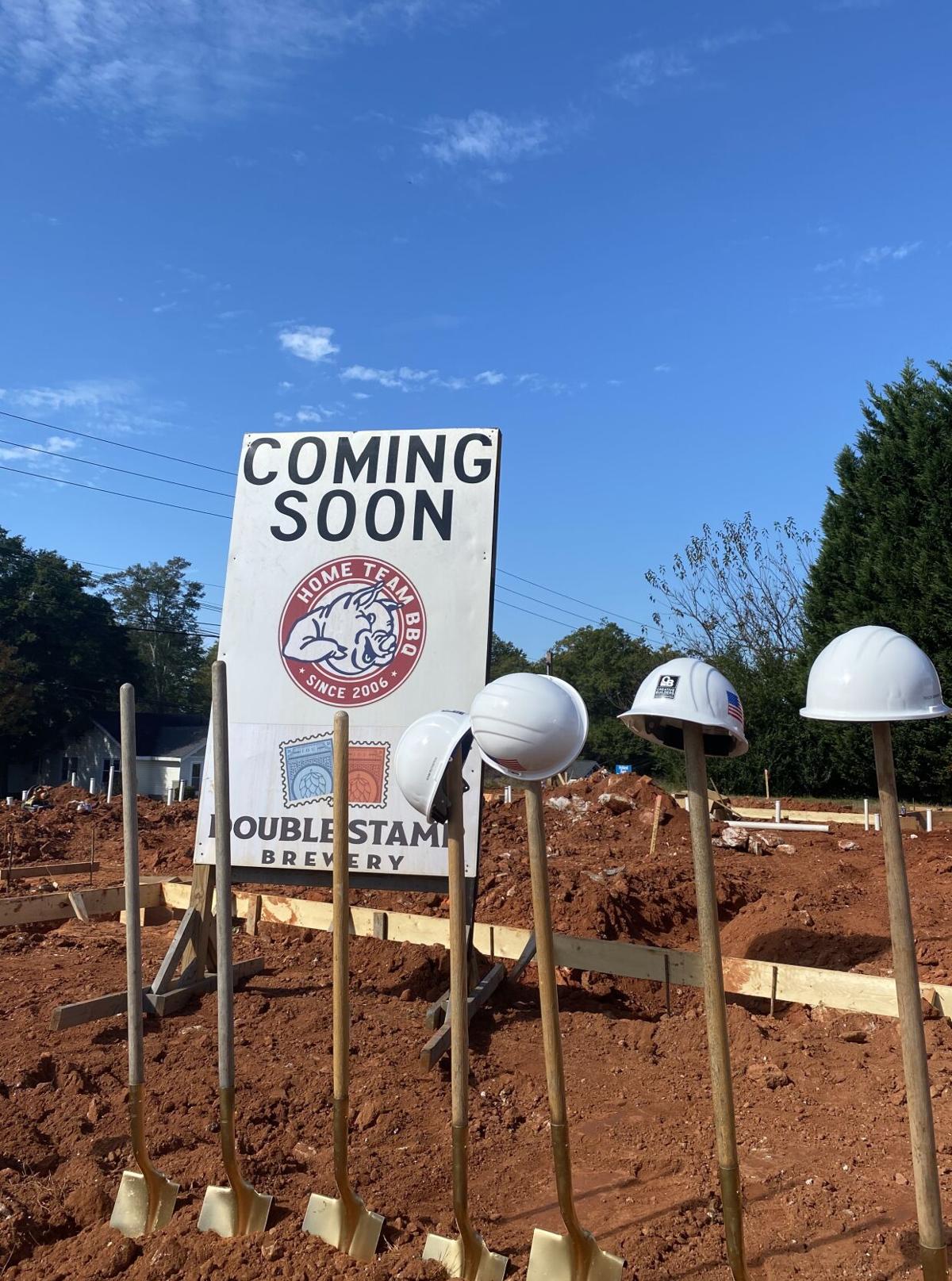 A scene from the groundbreaking for a new Home Team BBQ location in Greenville. 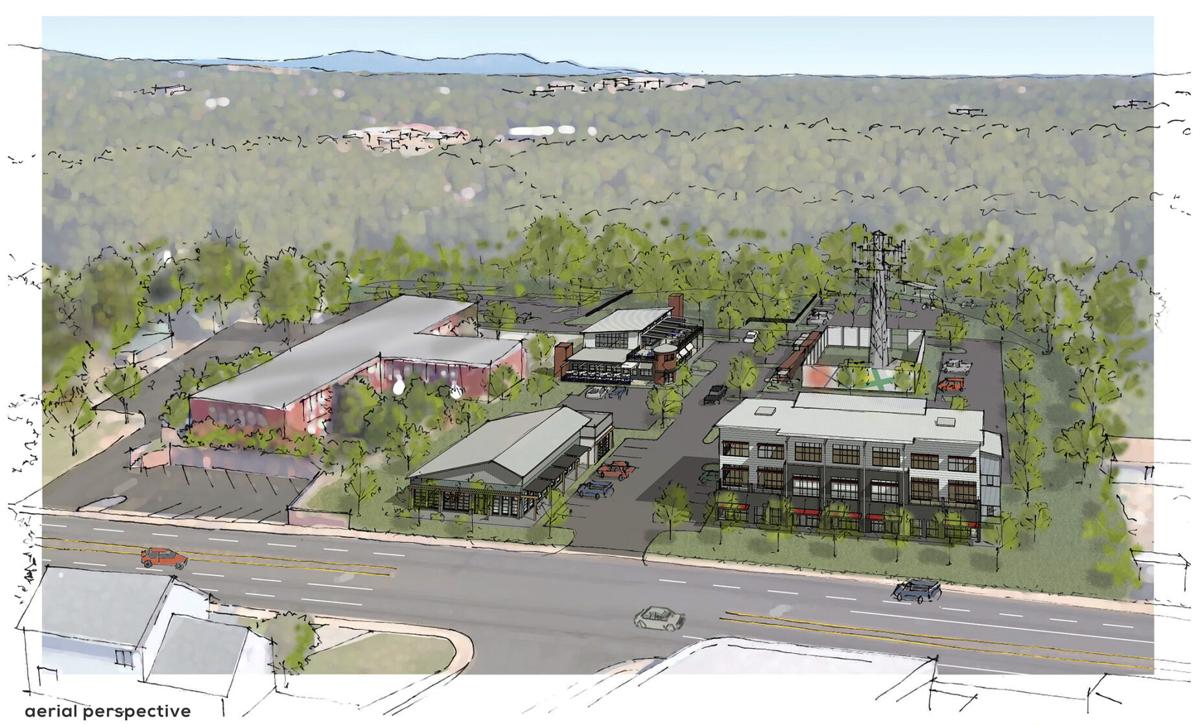 A rendering of a 12-acre development along Laurens Road and adjacent to the Swamp Rabbit Trail in Greenville. 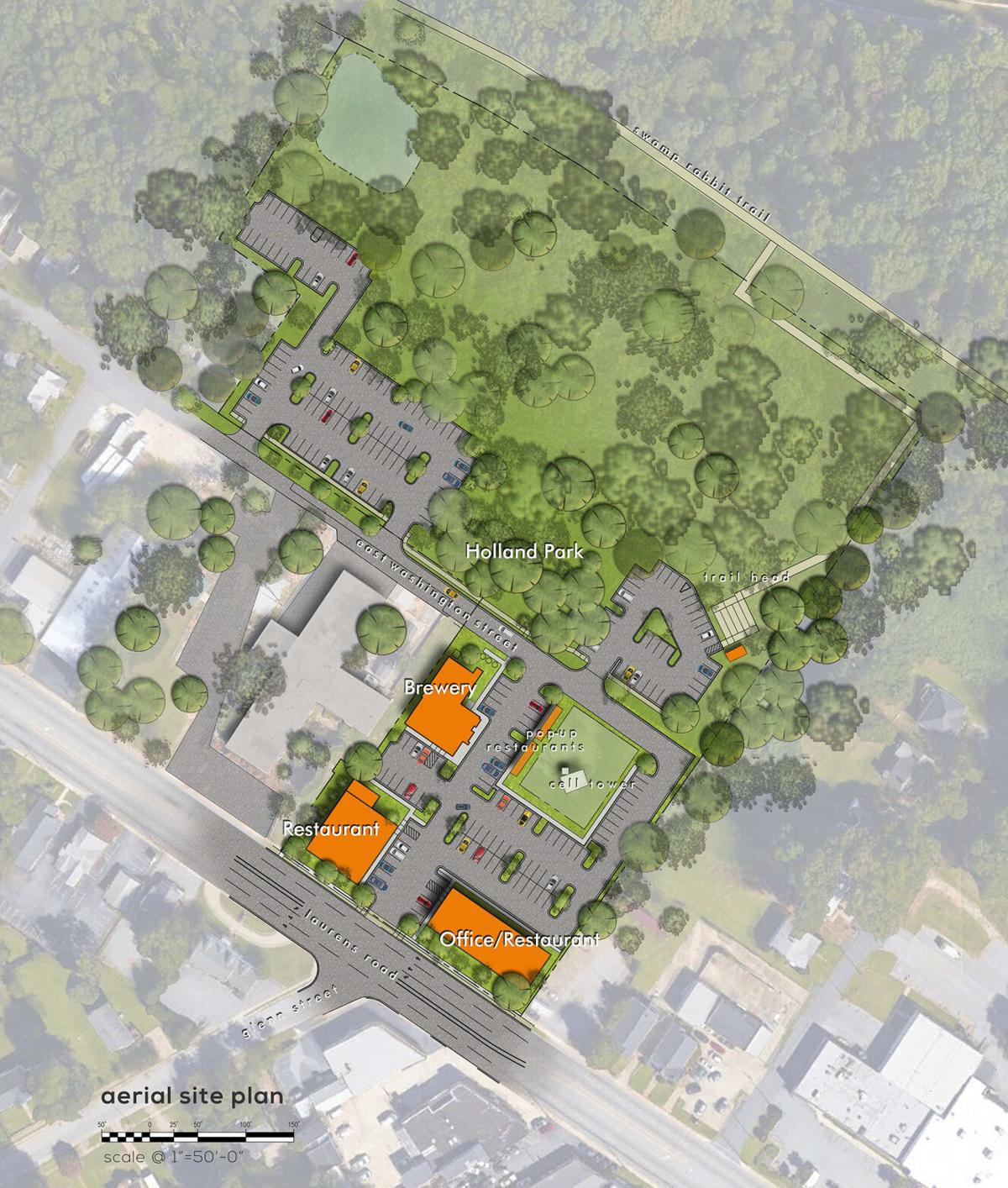 A site plan for a 12-acre development along Laurens Road in Greenville.

If you were to consider the economic malaise caused by the coronavirus, Darryl Holland might not be the first person you'd expect to complete one of the most significant new developments along the reemerging Laurens Road corridor.

He’s a real estate attorney, not a developer.

But he also fancies himself a news junkie. Back in 2017 he kept close tabs on the slow-moving plans for a Laurens Road extension of the Swamp Rabbit Trail, which along its 22-mile stretch from north of Travelers Rest to downtown Greenville has energized businesses and reshaped neighborhoods.

Now, the Upstate native's vision for 12 acres along the trail is all coming together.

A new, rooftop brewery concept — Double Stamp Brewery — led by a longtime craft beer entrepreneur whose selection of a name is inspired by the classic comedy “Dumb and Dumber.”

And soon, close-to-finalized plans for a Flying Rabbit zip line adventure park to take form three stories up among the century-old trees Holland insisted on preserving along the trail.

“You can read in the paper that the Swamp Rabbit is important, but until you’ve actually lived it, and see the people, then you understand,” Holland told The Post and Courier following a ground breaking for the project Wednesday. “That’s going to be the Swamp Rabbit Highway.”

As the stakeholders tossed a little with golden-colored shovels for a photo op, crews were behind them beginning the actual work of laying the foundations for the restaurant and brewery.

Both are expected to open by early next summer.

“This is not the first new development along Laurens Road, but it’s perhaps the biggest in size and the most significant," Greenville Mayor Knox White said. "It’s going to tell the story.”

The Laurens Road extension of the Swamp Rabbit, which would stretch 4 miles from Cleveland Park to the CU-ICAR campus near I-85, has been in the works since 2015. Greenville County is managing the project, and it has faced delays as tens of millions of dollars of private investment crop up along its path in anticipation of the economic potential. The county has ripped up rail lines to clear the way and the last estimate earlier this year was for completion in Spring 2022.

In December 2018, after calculating that establishments along the Swamp Rabbit saw business increase by an average of 35 percent, Holland announced his plans and said he was entering contracts with the restaurant and brewery, including provisions that they begin construction on an agreed upon timeline.

Originally, the plan was for the two to open this past summer but the coronavirus outbreak stalled progress. Instead of hold them to the terms, Holland said all involved decided to take a breath.

“We mutually agreed just to pause," Holland said. "We said, 'Let’s see what happens. Let’s make sure we even have a restaurant that can legally be allowed to open and people feel comfortable coming.'”

In 2017, Holland bought up a collection of properties along Laurens Road just up the hill from the popular Willy Taco restaurant, which owners strategically placed in a renovated Feed & Seed store as they, too, saw a bright future for the long-neglected corridor and the coming of the trail.

He brought on a team of conceptual experts and kept marketing in-house to personally work with tenants.

The current phase of the project encompasses half of the footprint planned for the property. The overall plans for the development include a three-story building facing Laurens Road and a complex of shipping container restaurants akin to the Gather GVL concept in the West End downtown.

On the back end of the property, Holland saved about a dozen century-old oak trees with plans to create a park as what is expected to be tens of thousands of trail users each year make a pit stop. In the canopied area, Holland said he has recruited the Flying Squirrel zip line adventure park, which has locations across the country. The deal is close, he said.

The second half of the project involves tearing down an old building for future development. The project could include residential but hasn't been planned.

In Charleston, Home Team stands out among the area's BBQ establishments. Since it opened in 2006 and developed novel side items and inventive cocktails, it's been honored nationally by the likes of Food & Wine, Southern Living, Esquire and Travel+Leisure.

For the past several years, the restaurant's founder and pitmaster, Aaron Siegel, has brought the brand to the upscale food festival known as "euphoria."

From the beginning, Siegel said he saw an emerging food scene in Greenville similar to the beginning stages of Charleston's growth into a nationally recognized player.

“We saw that it was like Charleston in the early 2000s from a food and beverage point of view, kind of just gaining steam,” he told The Post and Courier after the ceremony.

The restaurant has locations in downtown Charleston, Sullivan's Island and West Ashley, along with a spot opened last year in downtown Columbia. There is another in Aspen, Colo., where Siegel lived before coming to South Carolina.

This will be the sixth, and Siegel said he will see it through before considering any ventures into other markets. He said he is confident that the limitations of the coronavirus won't terribly impact his restaurant, particularly because there will plenty of outdoor space.

“We’re going to hang tight in Greenville for the moment and make sure we see this project through, and we’ll see what happens after that,” he said.

Tomforde has extensive experience in the craft beer industry, first in Asheville where he founded Pour Taproom, a concept that offers several dozen rare and standard craft beers on tap that patrons can self-serve through digital arm bracelets.

In 2016, Tomforde opened a Pour location in downtown Greenville with his brother-in-law in the former World of Trains museum near Falls Park. Still living in Greenville, Tomforde said he decided to pursue his dream of owning a brewery but needed a location, a quality food partner, parking and, most of all, an atmosphere.

"We don't necessarily sell beer," he said. "We sell and environment and a community atmosphere. As a result, people will drink a beer."

The brewery, which will have a rooftop area, will "take a real fun and light approach to beer," he said, and will feature lighter brews — pilsners, lagers, session IPAs — that are lower in alcohol content.

The name itself speaks to a theme of joviality.

Double Stamp is a reference to the 1994 Farrely brothers comedy "Dumb and Dumber" starring Jim Carrey and Jeff Daniels.

In the movie, dimwitted roommates Lloyd Christmas and Harry Dunne unwittingly get involved in a dangerous kidnapping for ransom scheme. In one scene as they travel from Rhode Island to Aspen, the two argue inanely, with Harry repeatedly yelling, "you can't triple stamp a double stamp!"

The "IOU" Embedded in the brewery's logo is another reference to the movie. Lloyd and Harry spend the entirety of the $100,000 ransom money, buying expensive clothes, a sports car and even wiping their noses with cash, and replace the bills with paper "IOUs."

The brewery will continue the 90s theme, Tomforde said, with other pop culture references throughout.