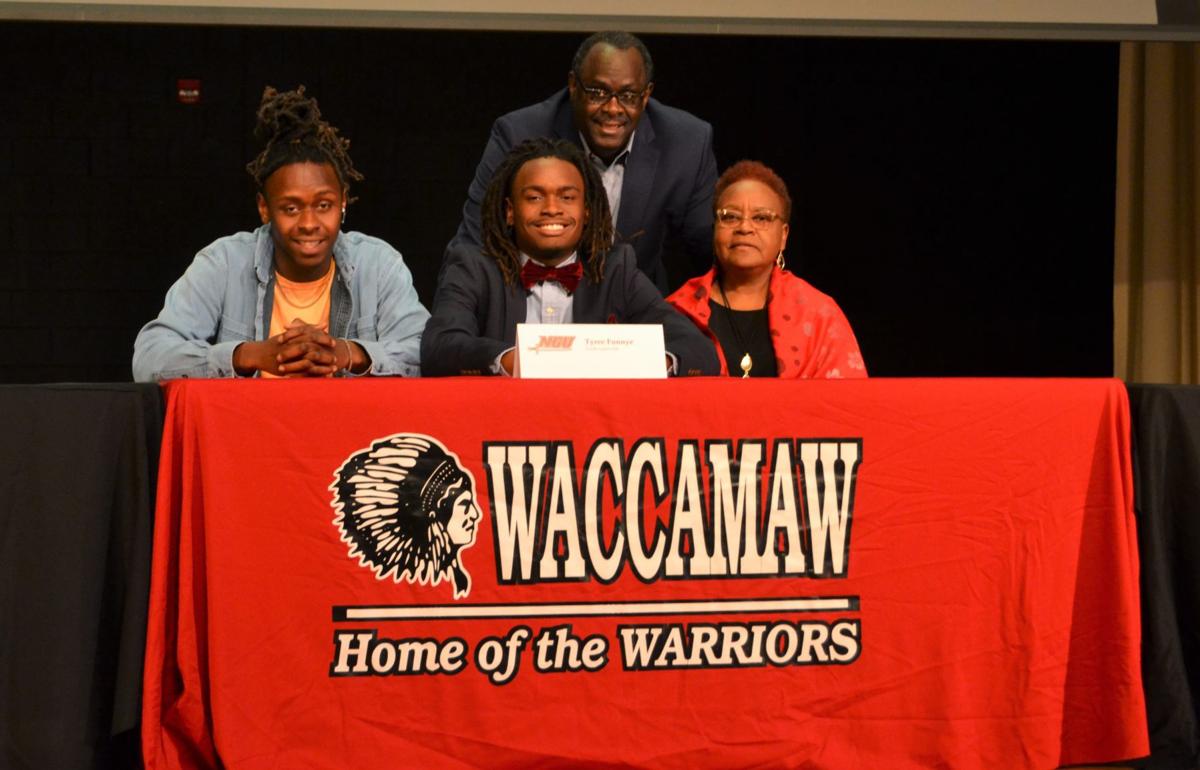 Waccamaw wide receiver/free safety/cornerback Tyree Funnye (front center) is surrounded by his family during a special signing ceremony at the Waccamaw High auditorium on Thursday, Feb. 6 where Funnye signed to play football at North Greenville University next season. 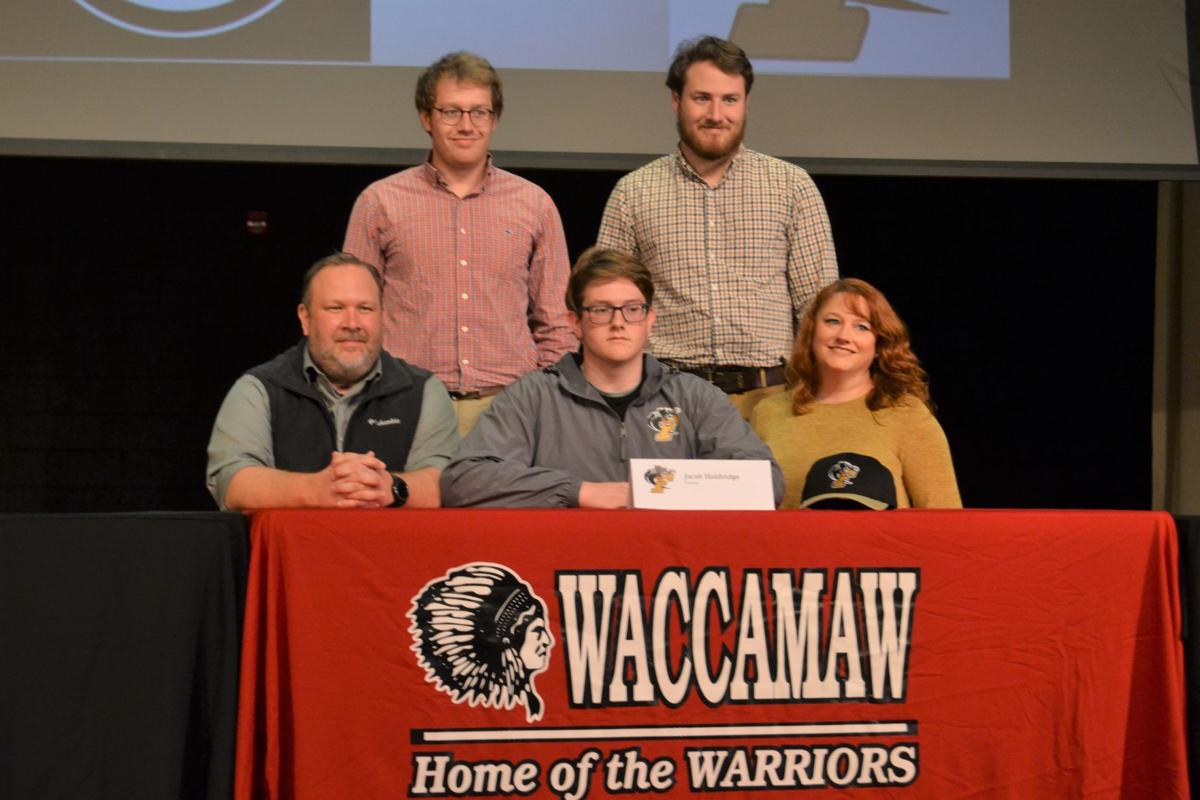 Waccamaw center Jacob Holdridge (front center) is joined by his family to celebrate his signing with Ferrum College at a special signing ceremony at the Waccamaw High auditorium on Thursday, Feb. 6.

Waccamaw wide receiver/free safety/cornerback Tyree Funnye (front center) is surrounded by his family during a special signing ceremony at the Waccamaw High auditorium on Thursday, Feb. 6 where Funnye signed to play football at North Greenville University next season.

Waccamaw center Jacob Holdridge (front center) is joined by his family to celebrate his signing with Ferrum College at a special signing ceremony at the Waccamaw High auditorium on Thursday, Feb. 6.

PAWLEYS ISLAND – It was a proud day for Waccamaw football.

On Thursday, Feb. 6, three football players signed to play football at the next level in a special signing ceremony held in the Waccamaw High auditorium.

“It’s special because these kids are getting to go live their dreams and play a college sport,” Waccamaw head football coach Shane Fidler said. “A lot of kids want to do it, but only a small percentage get to. These three have earned the right.”

“The family aspect of the program,” he said when asked why he chose it. “The football team is a good football team; the coaches, they really stood out. The school, the campus, it was a pretty campus, great environment, class ratio was good. They play in a top D(ivision) II conference and I wanted a good opportunity to play and a good challenge to play.”

Funnye was grateful to have a signing day.

“It means a lot to me,” he said. “I think I’m the first in my family, so I’m really happy to make my family proud. That’s one thing I really want to do.”

Playing football as a Warrior taught Funnye a lot.

“I learned that it’s a family sport,” he said. “You kind of have to go through your losses, your Ls, to get to where you want to be. So yeah, that’s really what I learned; reconstruction.”

Fidler had nothing but praise for Funnye.

“Tyree is probably the best receiver in school history, or one of the best, there are some other good ones you could label out through there as well,” Fidler said. “He had over 2,400 yards, over 100 catches, 24 touchdowns and some great defensive plays. He’s made all the all-star teams you could make in this state and area. He’s a great student, too. He takes college classes in the morning, he’s an honors kid; he’s earned the right to continue this journey to play a college sport and do it for a good program.”

Holdridge, who played center at Waccamaw, still isn’t sure what position he’ll be playing at Ferrum.

“It all just depends on how I bulk up in the summer and what the coaches do to me,” he said. “My position up there is undetermined, but hopefully it’s going to be center again.”

Holdridge knows all of the commitment it took to get to this moment.

“It’s 12 years of work and dedication finally paying off for something,” he said. “I started when I was five years old, and here it is. At 17, it feels good to say yeah, I made it somewhere doing the sport that I love.”

Holdridge learned a lot of life lessons while at Waccamaw.

“Grit,” he said when asked what he learned. “Stuff’s not always going to go your way, but it’s about the fight through it and making the best of what you have. You know, enjoying the time while you do have it.”

Fidler wasn’t sure if Holdridge would be playing at the next level just a few months ago.

“Before the season, he didn’t know if he even wanted to play college football,” Fidler said. “In fact he told me no. And as the season went, Jacob decided that he did want to play college football and we found him a great home. He’s a rural-type kid from the middle of nowhere Georgia. His mom got a job at the hospital and he found a college home in a rural place in Virginia at Ferrum, so it’s a great fit for him. What they run scheme-wise fits his personality and abilities, too, and academically it’s a great for him as well. And that’s most important because, you know, they say ‘people go pro in something other than sports’, so they got to think about that stuff.”

Joyce loves the academics at Guilford.

“Mainly because it’s very strong academically,” he said when asked why he chose the school. “It has very good career placement, and also the fact that, you know, as much as I love football, I’m also a student first. I do really well in school, I really do want to do well in life and I think football plays a lot into those lessons that can help me later on.”

Joyce learned a lot about teamwork while at Waccamaw.

“I’ve learned that it takes a team to achieve greatness,” he said. I mean, I came into this program junior year; we went 1-8 and our school sort of had a reputation for being a bad program, whatever the case may be, a program that wasn’t that good. And then senior year we came back with a 7-3 record in the regular season. We lost in the playoffs but I think we set the foundation for future players, so just being together as a team, pushing each other to our limits I think taught us a valuable lesson on how we can achieve success in life.”

Joyce knows how important this moment is to him.

“It means a lot,” he said. “I mean, it’s a lot of work that paid off. I’ve always dreamed of being on stage and doing this. I’ve been praying to God ever since junior year, ‘I really want to sign, I really want to play football in college’, and you know, here I am. It’s just all that work and all that dedication paying off right now.”

Fidler didn’t know if Joyce would be playing football at the next level, either.

“Matt’s another kid where he wasn’t sure he wanted to play college football,” Fidler said. “But then as the season went, he was like ‘you know what, I do want to do this. This is important to me. I like it and I’m passionate about it’. And academics are very important for him. He’s going to make a lot more money than I am one day, whatever his job is. He found a great fit university-wise athletically at Guilford.”