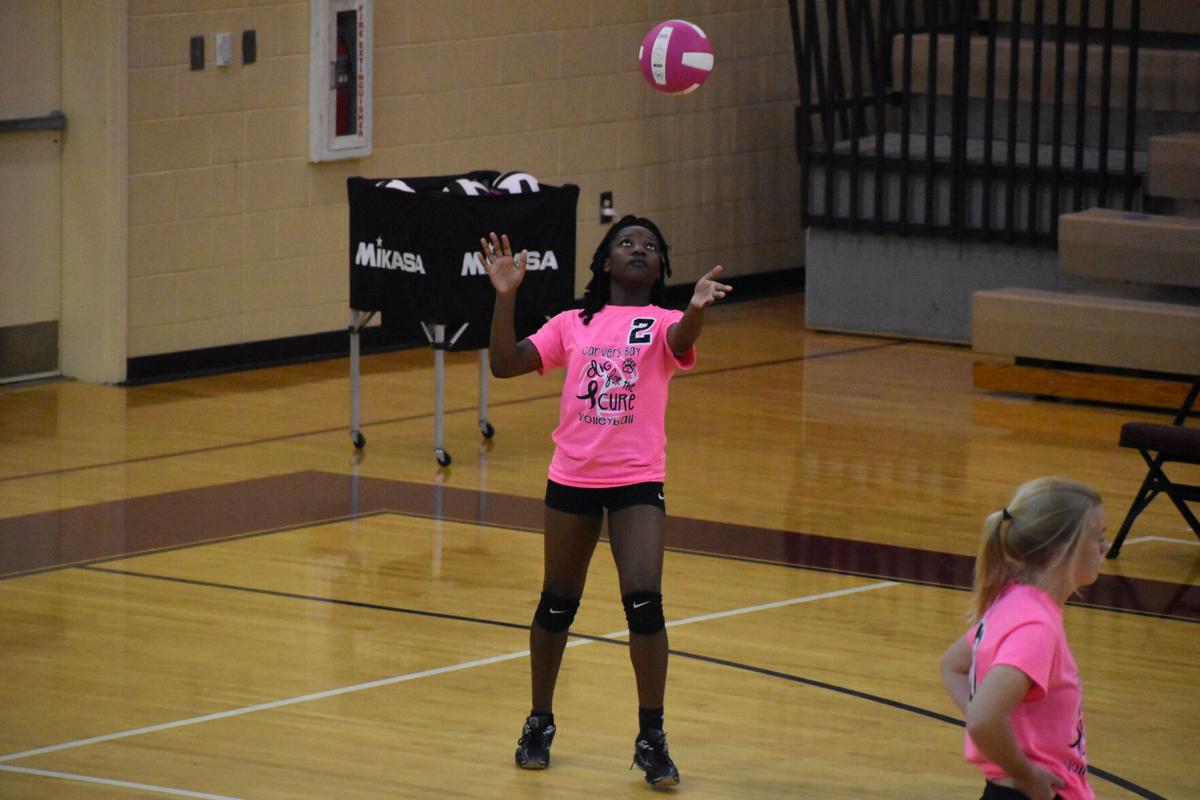 Carvers Bay junior outside hitter Kennedi Collins prepares to serve during the Lady Bears’ scrimmage between varsity and JV on Oct. 7 at the school’s gym. Danny Kelly/Nick Masuda 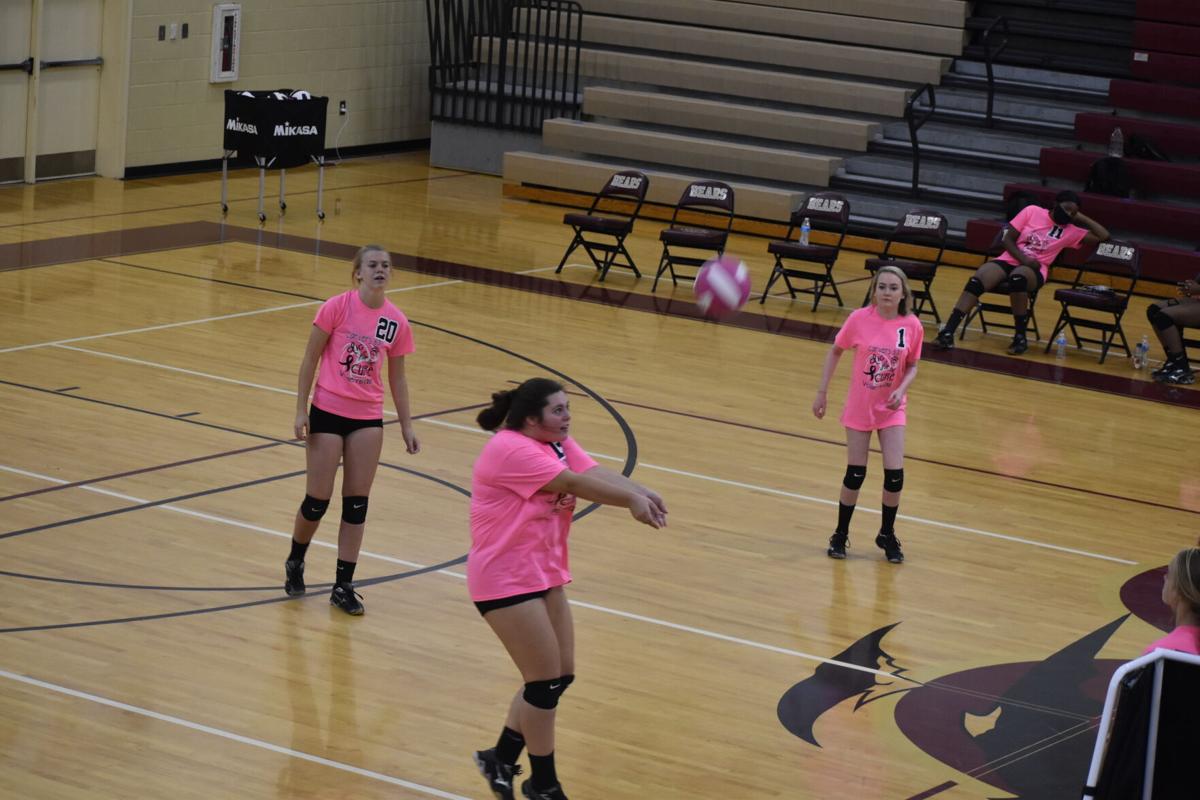 Carvers Bay senior right side hitter Tabbitha Powell (16) returns a volley during the Lady Bears' scrimmage between varsity and JV on Oct. 7 at the school's gym. Danny Kelly/Staff 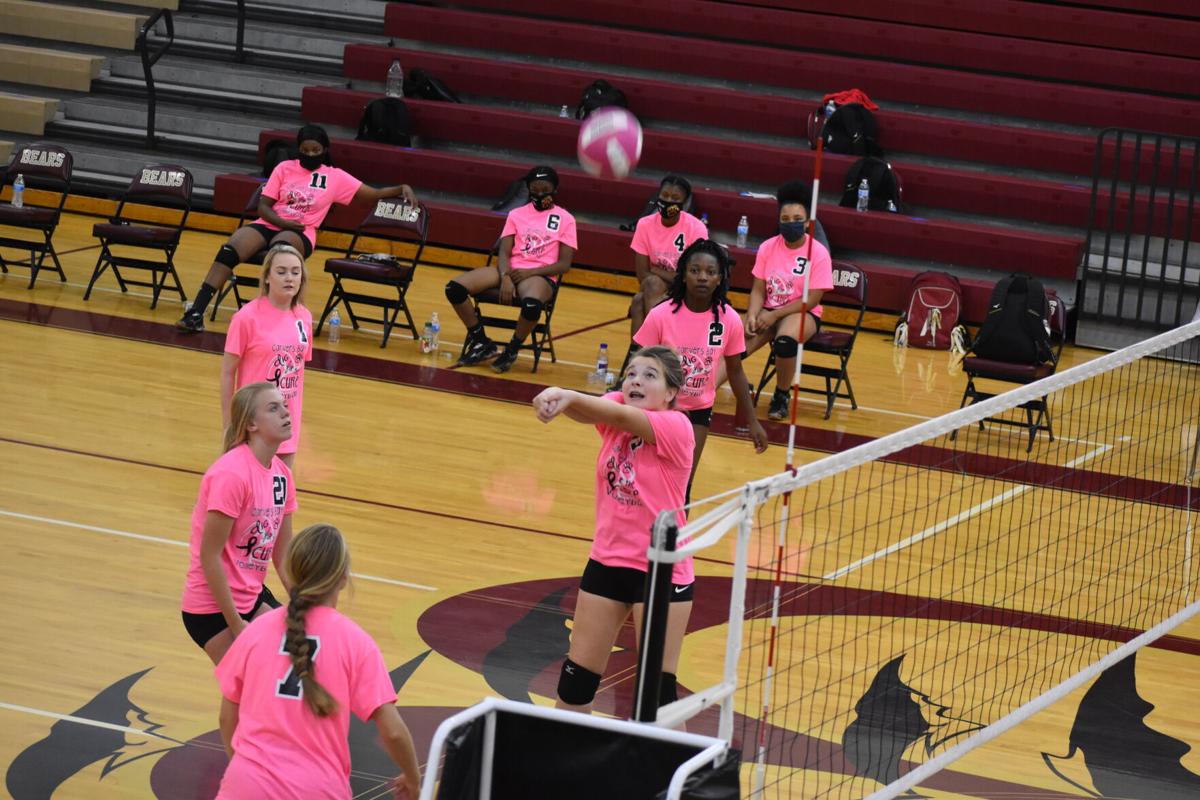 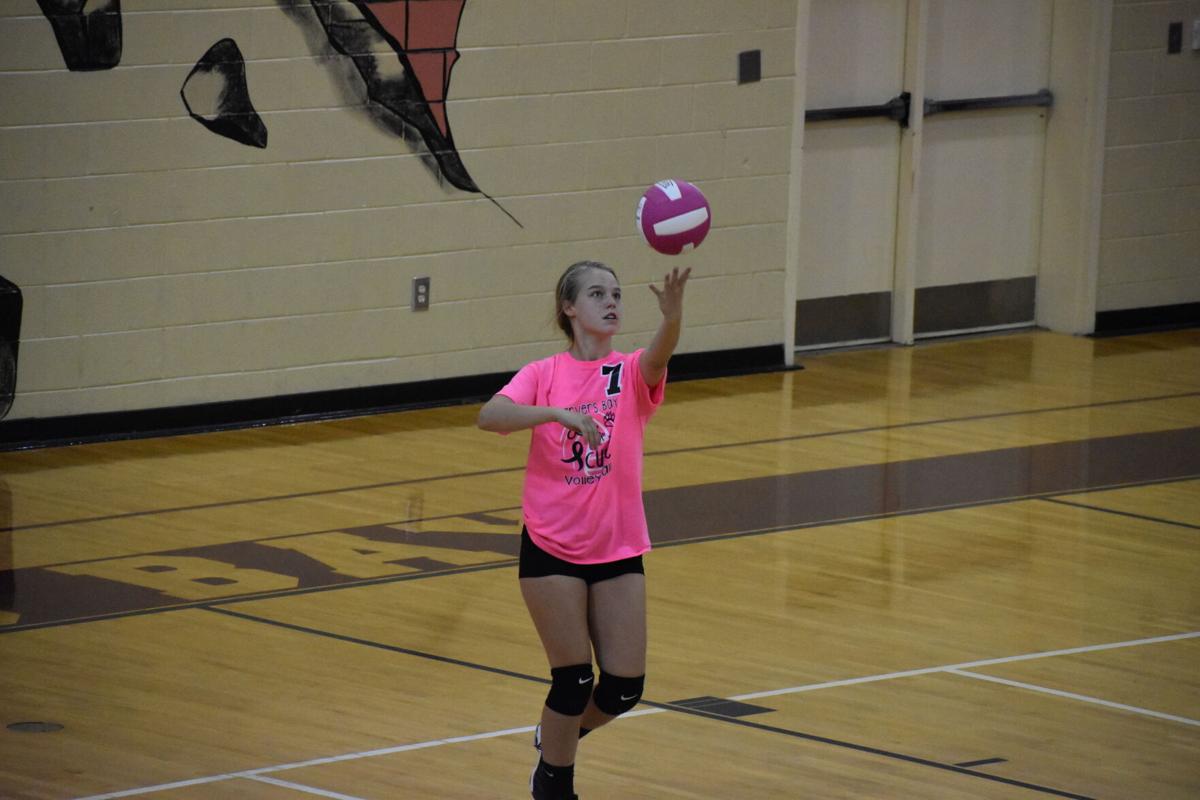 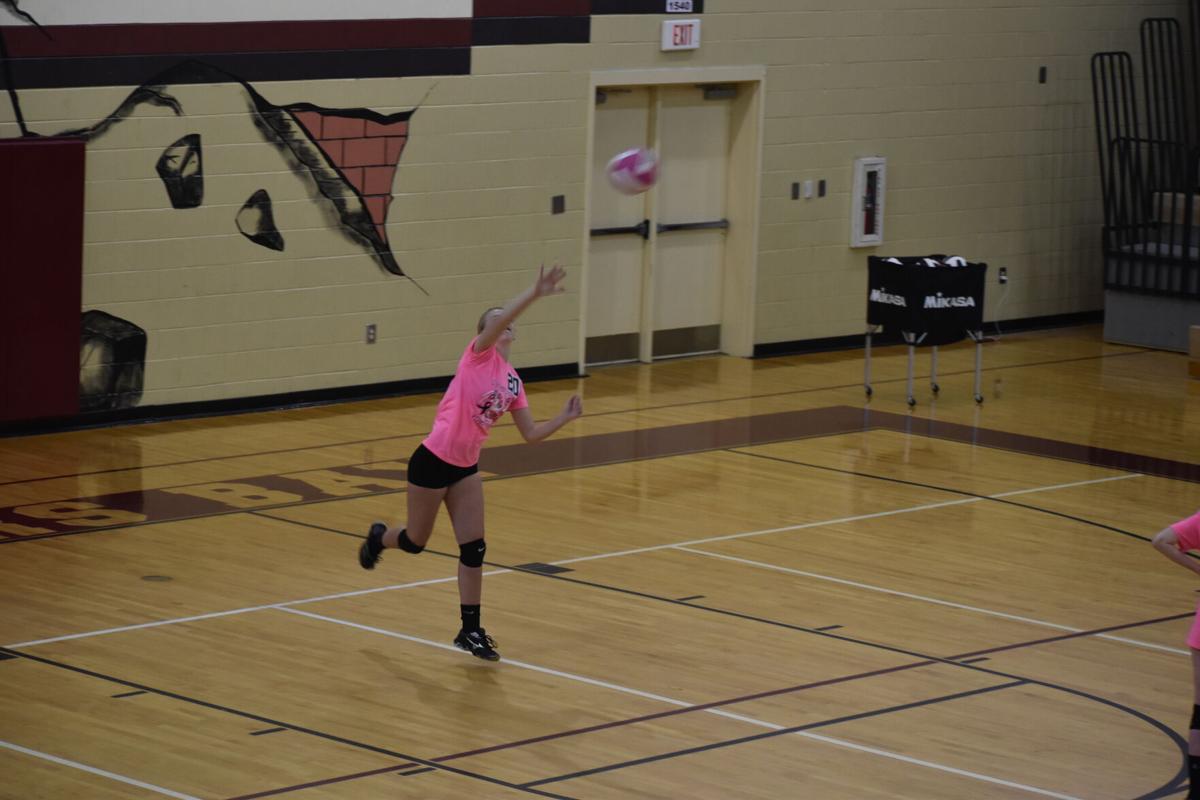 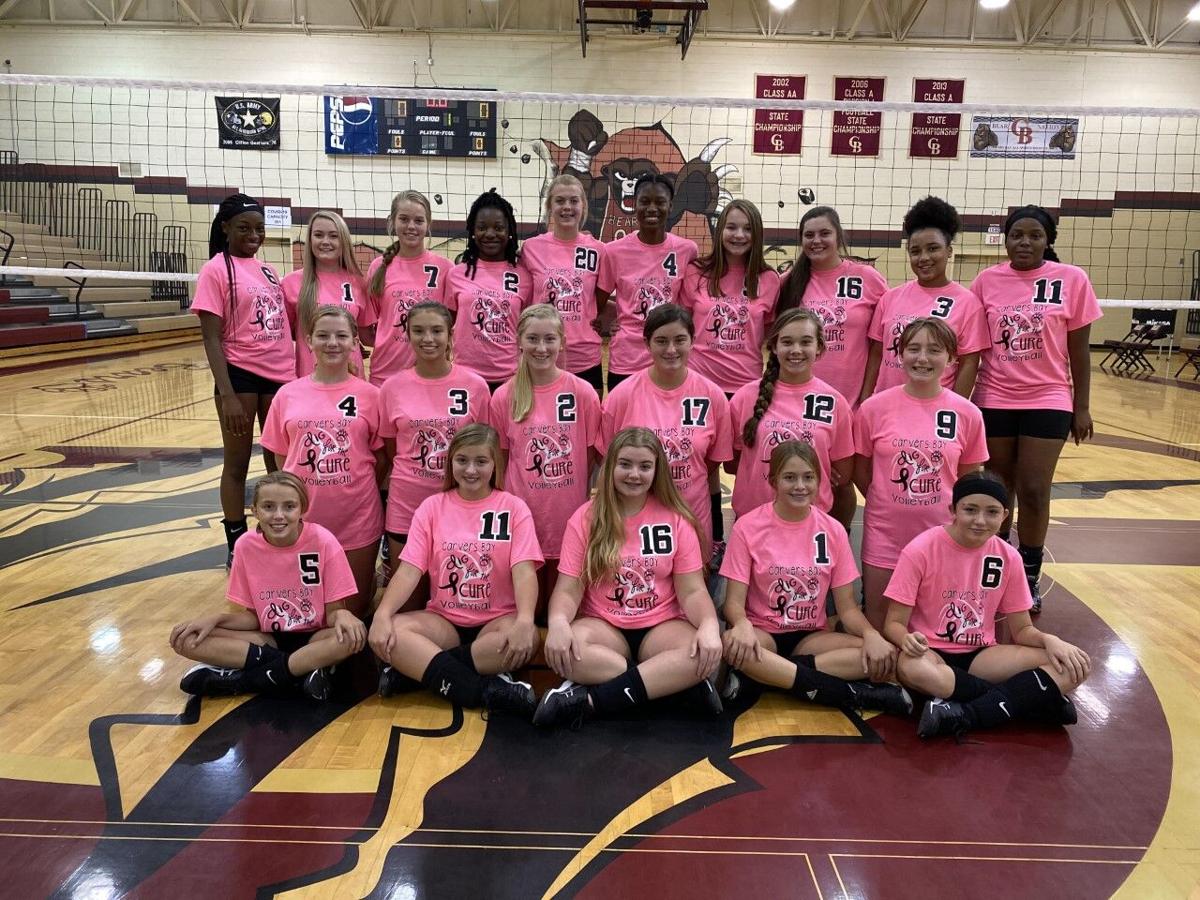 Carvers Bay junior outside hitter Kennedi Collins prepares to serve during the Lady Bears’ scrimmage between varsity and JV on Oct. 7 at the school’s gym. Danny Kelly/Nick Masuda

Carvers Bay senior right side hitter Tabbitha Powell (16) returns a volley during the Lady Bears' scrimmage between varsity and JV on Oct. 7 at the school's gym. Danny Kelly/Staff

HEMINGWAY — It’s been a crazy year in high school sports with seasons being shortened and starting later than usual.

Throw in COVID-19 protocols to help prevent the spread of the virus, and it has been arguably the most difficult season to navigate — ever.

The Carvers Bay volleyball team was one of many teams in the area impacted by these strange times.

“It was a rocky start because we were under strict precautions; we still are,” head coach Kimberly Baker said. “Checking temps every day, even before they get out of the car and get dropped off, trying to make sure that we’re all safe.”

Volleyball was not allowed to begin full practices until Aug. 24, per the South Carolina High School League. Scrimmages began Aug. 31, games started Sept. 7 and the playoffs will begin Oct. 27.

“So we were not able to start like we normally do,” Baker said. “In the summer, the Francis Marion coach usually comes and does a camp with us and we were not able to do that, and we have a kids’ camp and we had to cancel that. We always have a preseason tournament in August and we had like seven or eight teams coming to play this year and we couldn’t do that either. So it just put us way behind in practice and in games.”

However, Baker knows it could’ve been worse.

“I’m really honestly thankful to make it this far,” she said. “Next week is our last week of the season (as of Oct. 7) so we’ve made it so far (with) nothing (stopping us).”

Although the Lady Bears have not had any positive COVID-19 tests this season, neighboring Georgetown High was reported to have one or more cases according a Georgetown County School District official on Thursday, forcing the Lady Bears to cancel their home match against the Lady Bulldogs on Oct. 7. The B-Teams, JV and varsity were all scheduled to play.

Junior outside hitter Kennedi Collins longs for the days when the gym at Carvers Bay was full to support the team.

“Not having that support,” she said when asked what’s been the most difficult part of playing during COVID.

“Usually we have a packed house, but due to COVID, not everyone is here.”

Collins thinks the team have adjusted to the protocols as the season has gone on, at least in their own gym.

“They’ve adapted well,” Baker said. “It’s hard wanting to wear that mask. But I told them that we have to do that for our safety so we can keep playing.”

Despite losing six seniors from last year and having to deal with all of the pitfalls of coronavirus, the Lady Bears find themselves with a 7-1 record in Region IV-1A play and will most likely be a No. 2 seed in the playoffs after finishing second in the region behind East Clarendon. The Lady Bears and Lady Wolverines each beat each other, but the tiebreaker went the way of the girls from Turbeville, S.C., because East Clarendon beat Carvers Bay in only four sets while the Lady Bears took five sets to take down the Lady Wolverines.

After playing non-conference foe Johnsonville on senior night Tuesday in the last game of the season, the Lady Bears will prepare for the 1A state playoffs, where they have had similar results the last few years.

“Us moving past the third round of the playoffs,” Collins said asked what she’s most looking forward to about the postseason.

“(I’m looking forward to) making it as far as we can go and just pushing ourselves,” senior right side hitter Tabbitha Powell said.

Baker had high praise for what Powell has done for her team.

"She's been playing for years," Baker said. "She helps us hold the team together. She really does."

Along with Collins, Baker has also been impressed with junior middle hitter Morgan Glover and eighth-grade setter Jenna Kay Avant this season.

With so many young players performing well, it seems the sun also rises on the future in Hemingway.