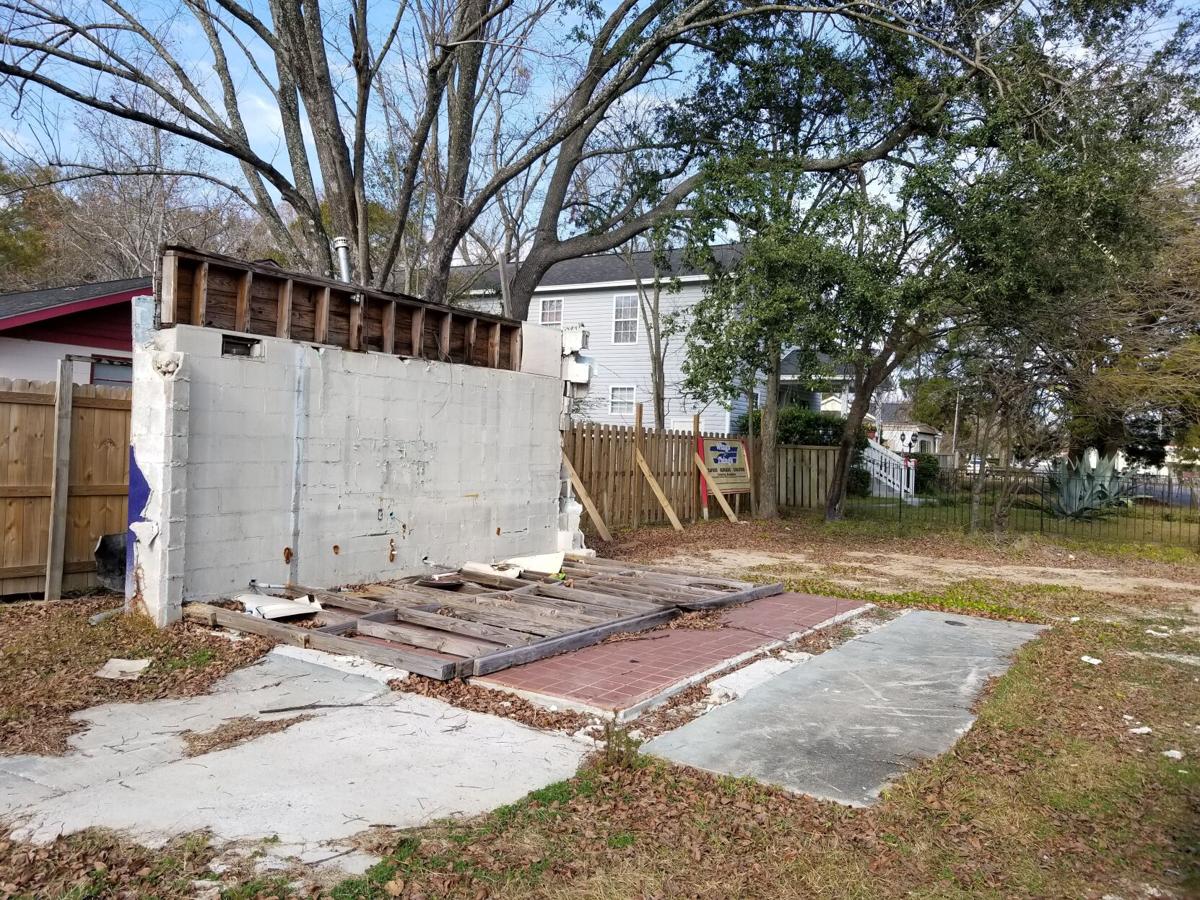 Locals of the neighborhood that sits across from the old Liberty Steel mill site say it once had a grocery store on every corner, dozens of churches and a sense of community its older residents reminisce on. Now, one or two walls of what were once homes are a regular sight, as Butts estimates the community has lost 70 percent of its population in the last three decades. 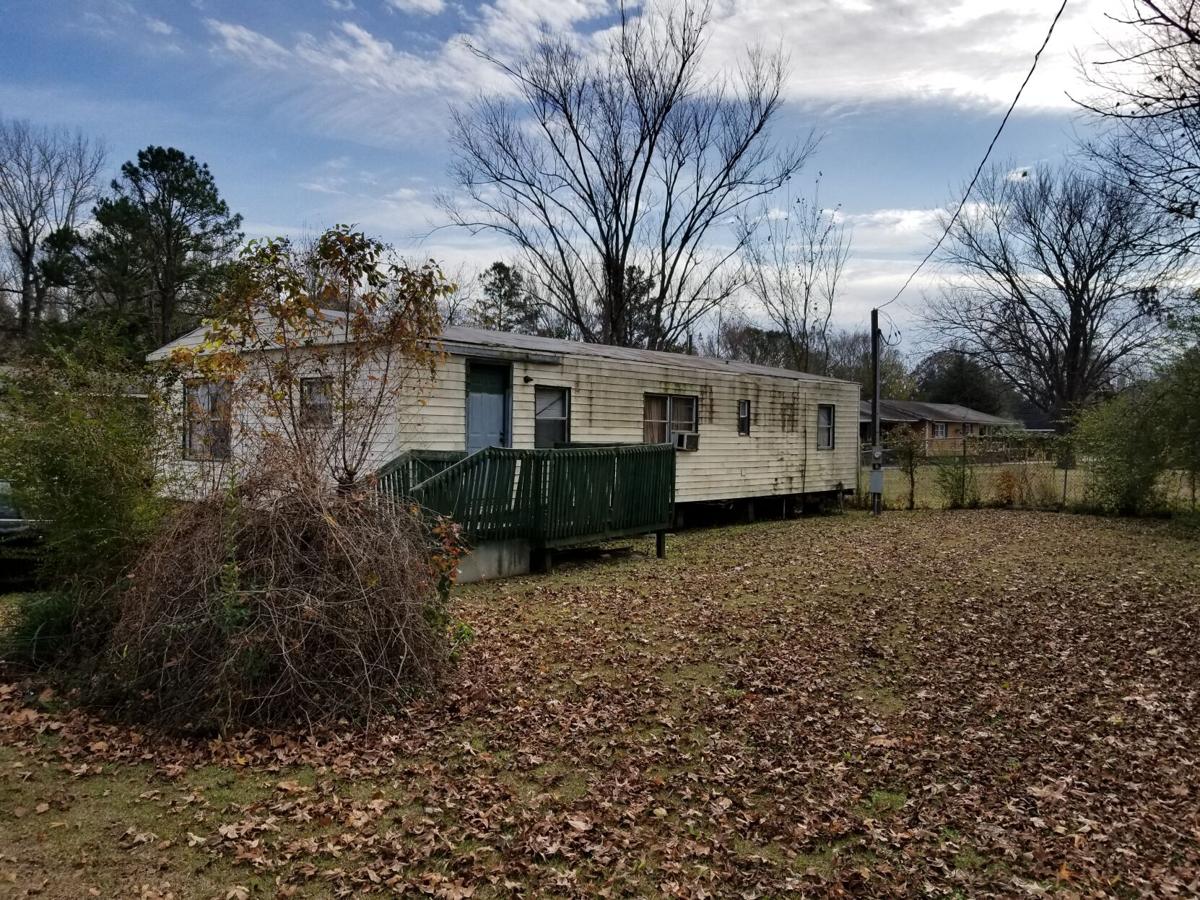 The West End is home to International Paper Co. and the currently-paused Liberty Steel mill. While many residents in the city desperately want to see the West End given new life, they also worry about the area being gentrified and becoming unaffordable to its current residents. 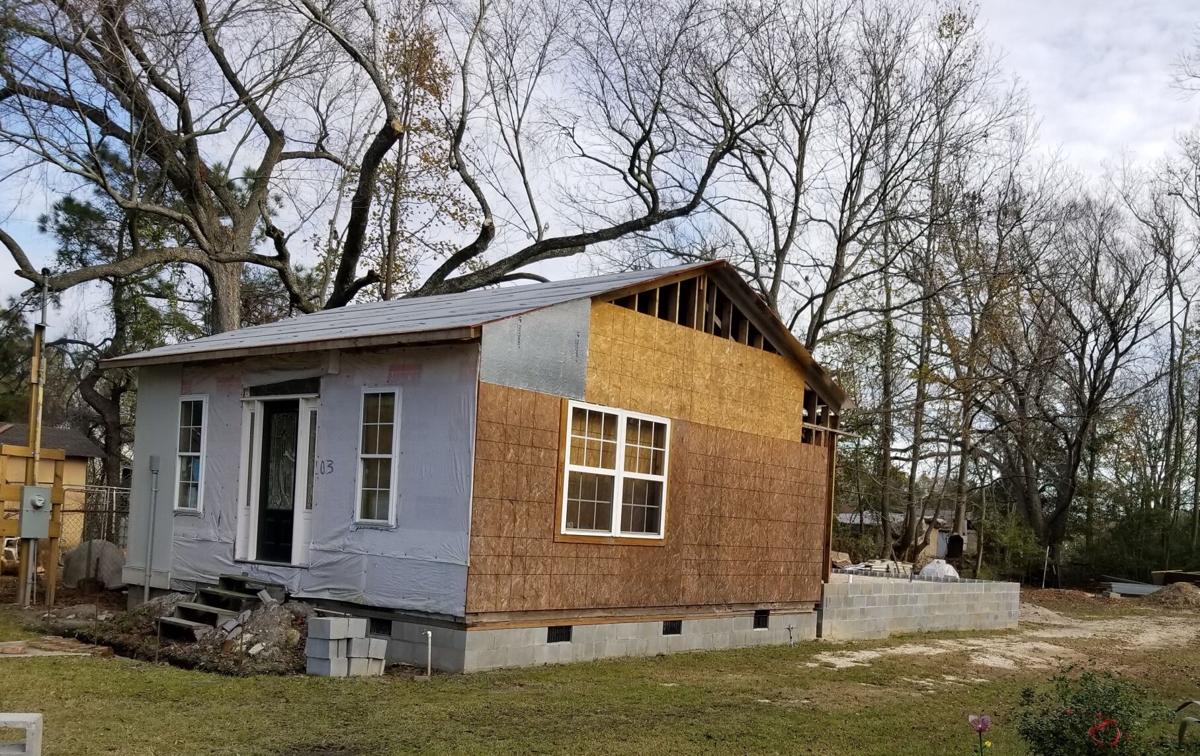 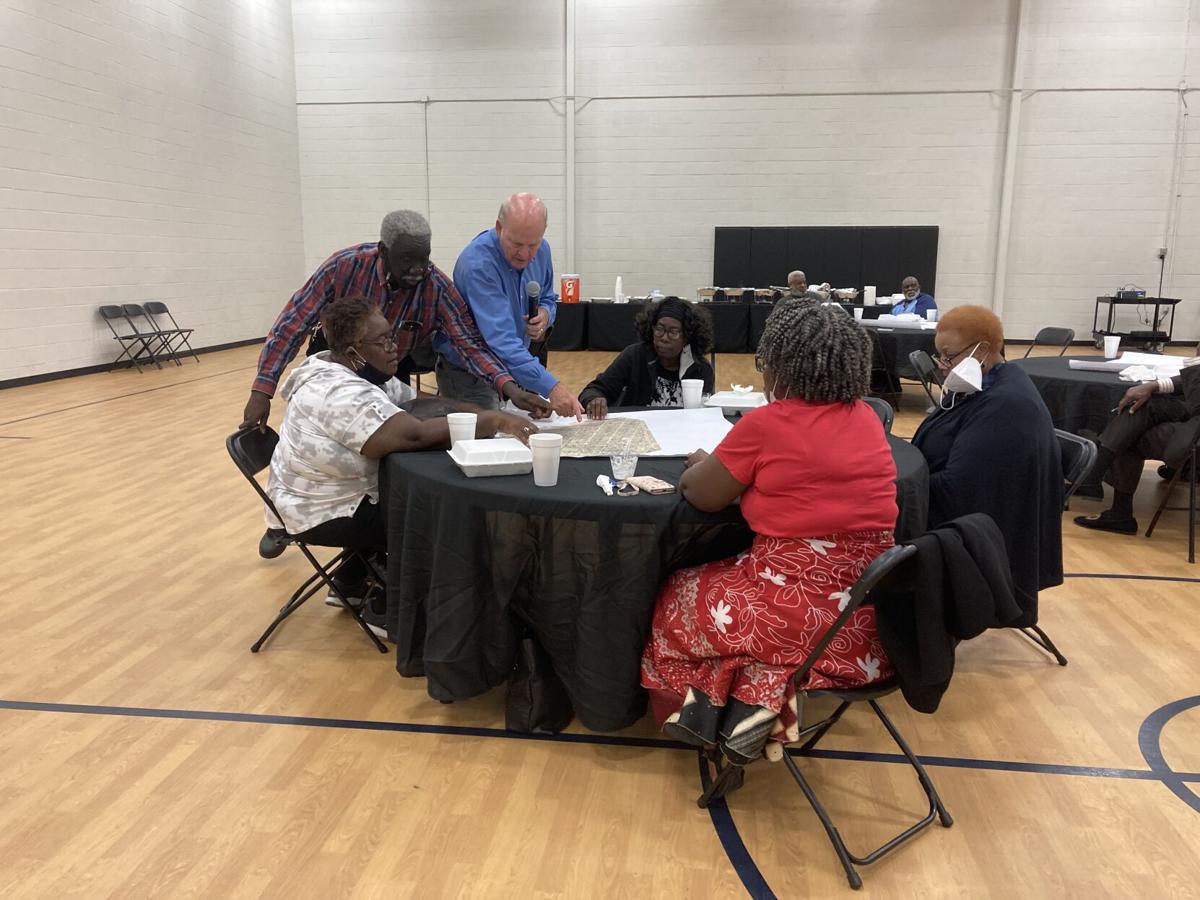 Alexander and Watts came on Oct. 19 and initially asked about 15 residents what their hopes and dreams for the community are, and what makes it special. Residents like Sadie Williams said their heritage matters to them, as nearly all of them left the West End but came home years later.

Locals of the neighborhood that sits across from the old Liberty Steel mill site say it once had a grocery store on every corner, dozens of churches and a sense of community its older residents reminisce on. Now, one or two walls of what were once homes are a regular sight, as Butts estimates the community has lost 70 percent of its population in the last three decades.

The West End is home to International Paper Co. and the currently-paused Liberty Steel mill. While many residents in the city desperately want to see the West End given new life, they also worry about the area being gentrified and becoming unaffordable to its current residents.

GEORGETOWN — Residents in the West End of Georgetown have been begging the city for help with dilapidated structures and neighborhood deterioration for decades.

All they have gotten, though, is buzzwords that bring little change, even after a new push from the city and business leaders, said Sheldon Butts, the four-year former city council member and West End native.

As redevelopment happens all around the historic Black neighborhood, residents fear being priced out of their generational homes, but the West End doesn’t need people to come in and tell them how to fix their issues, Butts said.

A local Realtors association teamed up with the city, and brought in a nonprofit partner Oct. 19 and 20 in attempts to find solutions to dilapidated structures. The nonprofit's representatives, Frank Alexander and Jazz Watts, suggested forming a community group — which the West End already formed years ago.

Butts was hoping these experts on neighborhood revitalization would spark real ideas for change in the West End, but instead he and others in the community came away from the visit feeling let down once again.

“That's a shame on me, I expected something different this time,” Butts said.

Butts said there already is a plan that spells out in detail the key issues affecting the community — poverty, dilapidated structures and heirs properties, or land owned without a clear property title that is rather orally passed through generations.

Butts said the West End Redevelopment Plan, made by the city in partnership with the Waccamaw Regional Council of Governments, has sat almost completely unused though since it was created 2003.

“I don’t care how many Frank Alexanders we bring in, we’re going to always go back to that plan right there to be the closest thing there is to a workable, viable plan of action,” Butts said.

Locals of the neighborhood that sits across from the old Liberty Steel mill site near downtown say from the 1930s to the 1980s, the West End flourished with more than 60 Black-owned businesses.

Children were raised by the collective neighborhood with dozens of churches and residents lived separate from the city of Georgetown.

Now, those businesses are gone, the number of churches has shrunk down to less than a handful and one or two walls of homes left to deteriorate are a regular sight. Butts estimates the majority Black community has lost 70 percent of its population in the last three decades.

In 1971, according to the redevelopment plan, the West End was made part of the city. That meant adhering to Georgetown’s zoning rules. Years without zoning created skinny lots with large homes so as to pack as many homes in as possible, and the new rules forced residents to widen their lots via complex zoning applications or purchase adjoining properties to make them bigger.

Because of the inconsistencies between West End properties and Georgetown city zoning laws, officials created the neighborhood development plan in 2003, hoping to find a compromise.

Still the community suffered under the red tape now required of them, and what was once houses and businesses on every street and corner became a handful of businesses and many dilapidated, worn out buildings.

Butts formed a subcommittee while on city council in 2016 to reinvigorate the redevelopment plan, and since then it has educated residents on heirs property.

The subcommittee also tried to find grants to help demolish some of the structures and replace them with affordable homes.

Even with the subcommittee, the city has given the community little to nothing, Butts said.

The neighborhood has received some money for streetscaping, sewage and drainage but not much else, Butts said.

While those things are vital, it is nothing tangible that residents to be inspired by, Butts said.

“Not saying there isn’t the need for upgrades to the sewer system, but these are things that residents can’t physically see," he said. "Like, (the city) just spent a million dollars here on the West End, but we’re still living the same way we are."

The Coastal Carolinas Association of Realtors knew the West End has been struggling for years, said Madison Cooper, the organization's vice president of government affairs, so pairing its revitalization partner with the neighborhood felt like a great fit.

The local Realtors and its national parent company have a program called Transforming Neighborhoods, which partners the nonprofit, Michigan-based Center for Community Progress.

The center, according to its website, tries to help urban, suburban and rural communities by “transforming vacant, abandoned and deteriorated properties.”

The center's co-founder, Alexander, said he is most proud of the work they've been able to do in Mobile, Ala., and Syracuse, N.Y., but that they've helped hundreds of neighborhoods over the last 10 years.

Alexander and Watts came on Oct. 19 and initially asked about 15 residents about their hopes and dreams for the community, and what makes it special.

Residents like Sadie Williams said their heritage matters to them, as nearly all of them left the West End but came home years later.

Williams returned to Georgetown nearly 50 years after she moved away to live and work in Connecticut, and she was shocked to see how worn down her neighborhood had become when she moved back.

But it was always her plan to move back to the house on Hawkins Street her grandfather built in 1914, and she plans on dying in that same house.

After talking about the history of the West End on the first day, Alexander repeated the same conversations of hopes and dreams to residents on Oct. 20.

Alexander didn’t offer any solid solutions to fix the problems residents talked about other than to form a community action group even though one has existed for several years.

Williams is part of the West End Citizens Council that was formed in 2014, and she said they show up to most county and city council meetings to lobby for help with things like sidewalks, potholes in roads, deteriorated buildings and more.

“Everything seems to be so focused, though, on downtown along the waterfront,” Williams said.

Inglese said the city is aware of the West End Redevelopment Plan and is in the process of updating it and incorporating it into its comprehensive plan.

But some of its 84 goals and strategies just don’t fall under government purview, Inglese said. That combined with budgetary constraints and struggles with clear property titles has made carrying out the plan a challenge, Inglese said.

The city hopes to filter out the achievable points in the 2003 redevelopment plan while it adds it to the comprehensive plan, Inglese said.

“At the same time, the private sector will need to respond and invest in improvements to the private properties," Inglese added.

Redeveloping Georgetown has become a focal point for city officials, developers and business people alike, and many West End residents fear it will hurt them more than it helps them.

The city of Georgetown has shifted its perspective in the last year to focus on attracting tourists through bold redevelopments, like a $25 million project including luxury condos, an open-air market and offices that’s in the works overlooking marshland on Church Street near the Siau Bridge.

Closer to the West End, South Carolina’s oldest newspaper’s office, The Georgetown Times, will soon be demolished to construct a 56-room boutique hotel along the city’s harborwalk.

And just down the street, the paused Liberty Steel mill, which once was the city’s largest employer, only has until Feb. 1 to resume operations. If its misses that deadline, the mill risks a zoning change that will bar it from reopening.

Liberty Steel’s more than 50 acres of waterfront land is seen as a golden opportunity to many private investors. And its right across U.S. 17 from Liberty Steel is the West End.

The West End very well could get caught up in the redevelopment of Georgetown, residents say.

Some even say it's already started — sprinkled among the dilapidated, worn out homes in the neighborhood are larger, nicer homes with fresh paint and fenced in yards.

Williams isn’t sure what will happen if the West End doesn’t get more help. All she knows is she’s staying in her grandfather’s house on Hawkins Street and making sure it’s kept up until she dies.

It’s up to residents to join together and tell the city they need help, Williams said. The citizens council is beginning to advertise its meetings in local churches, she said, and is moving those meetings to Saturdays in hopes more people will be able to attend.

“We’ll see what happens, we’re not going to give up, we’re just going to keep fighting for what needs done,” Williams said.

Butts understands development of the West End is going to happen, but what is important is that it is done with the intent of benefiting the citizens who are still there — most of whom are elderly like Williams or young families — rather than new residents who don’t understand the neighborhood’s history.

“At the end of the day, I’ll take my people who have been there their whole lives,” Butts said.