Georgetown County Council voted Tuesday, May 12 to rescind a previous state of emergency ordinance and enact a new one.

In another action, Council dissolved the existing Capital Project Sales Tax (CPST) Commission. That means a sales tax referendum will NOT be on the ballot in November.

The regularly-scheduled County Council meeting was conducted via livestream with a feed available to the public on Facebook.

“It allows employees to continue to work from home. It allows for virtual meetings.” Bryant added that if Council wanted to reinstitute public comment at Council meetings, it would need to amend the language of the emergency ordinance.

Bryant also said the new emergency ordinance provides for opening of public facilities. It continues authorization of the process of e-bidding procurement.

Bryant said that the State of South Carolina and the federal government are still in states of emergency. By adopting the new ordinance, that keeps Georgetown County consistent with those other government bodies.

Thomas asked Administrator Angela Christian if the County’s plans were to have the next meeting of County Council to be an in-person meeting. She said yes, with a plan to hold that meeting in the Howard Auditorium at 1610 Hawkins St. in the City of Georgetown.

By removing paragraph 7-D of the proposed ordinance, Bryant said that would reinstate the public comment portion of Council meetings. They have been suspended for the “virtual” meetings of Council.

With that change, Council members voted unanimously to approve ordinance 20-24.

By doing away with emergency ordinance 20-20, the Murrells Inlet Marshwalk, Jetty View Walkway, and Veterans Pier are now open. They had been kept closed after county-owned beach access points were opened.

After the meeting, Bryant told the Georgetown Times / South Strand News that the county’s new state of emergency ordinance continues to allow the administrator to determine opening and closing of public facilities. She will also be able to determine whether county employees will work in their offices or, in some cases, may continue working from home.

For the next 60 days, also, the county may continue e-bidding for procurements.

County Council and its various boards and commissions may meet in person, or may continue to meet virtually, under the direction of the county administrator. The ordinance also allows public hearings to be conducted electronically.

You may view Emergency Ordinance 20-24 on the newspaper’s Web site, accompanying this article. Note that this copy includes Paragraph 7.d., which was deleted from the ordinance before passage.

Around 2:30 p.m. Tuesday, the county put a “Survey Monkey” questionnaire online about the proposed sales tax. It was designed to gather public comment on a range of categories of projects that people might favor.

Following a 4 p.m. virtual budget workshop, Council convened again about 5:37 p.m. for its regular meeting. Among the agenda items was an updated report and proposed resolution on the CPST.

Chairman John Thomas said county staff is recommending that the Capital Sales Tax Commission “hereby be dissolved, disbanded, and decommissioned for the year 2020.”

Councilman Steve Goggans said “I’m relatively neutral on this. I do have questions about timing.”

“I recommend that the commission continue working on it. We have an operating commission, before we foreclose on the process.”

“The commission is doing an outstanding job,” Thomas said, “but they have almost half a billion (dollars) in projects … We’re really looking for an economic downturn at least in the foreseeable future. I think it’s not a good thing to impose a new tax.”

Goggans pointed out that under state law, the county could propose a referendum in a year, that it would not have to wait for two more years.

“They have reduced (the project list) significantly,” Goggans added.

In point of fact, an earlier total of all suggested projects had reached more than $418 million. At the May 4 CPST meeting, members reduced the list to $327 million. They further reduced the project list at their meeting on May 11. Commissioners had said at that meeting that they knew the project list would need to be pared down even more before it would be presented to County Council as a formal recommendation.

Administrator Christian said, “Just to give you an update on the survey. We have put the survey out there” on the County Web site and Facebook page.” (The Georgetown Times / South Strand News had also shared a link to the survey on its Web site.)

“It’s a Survey Monkey survey, and it’s certainly not as professional” as what could be done, “but there is a simpler instrument available that we have posted for folks to give us some feedback.”

Councilman Louis Morant suggested that the Commission and the referendum effort be terminated at this time.

Several Council members said they agreed with that idea. When the idea is presented again at a future time, they said they would want there to be community meetings where people could voice their ideas in person.

“The commission has done a lot of work, with more than 120 projects … they have been involved,” Council member Lillie Jean Johnson said. “They are to be commended. At this time, considering the economy, and health, I think we should disband the group if we are going to suspend the referendum,” she said.

Councilman Ron Charlton said, “I agree with what Lillie Jean said. It’s kind of a futile effort to keep that committee working.”

Thomas read the resolution into the record. It states in part:

“WHEREAS, Georgetown County Council believes, due to the global pandemic and the yet to be determined long term effects of the crisis, that it is in the best interest of its citizens to forego the implementation of a Capital Project Sales Tax Referendum in calendar year 2020.“

“NOW, THEREFORE, BE IT RESOLVED, that Georgetown County Council expresses its gratitude and thanks for the members of the 2020 Capital Project Sales Tax Commission for their detailed and dedicated work thus far in the capital project sales tax process and commend each member for their willingness to participate and serve the citizens of Georgetown County during a global crisis.”

The agenda item and the text of the resolution dissolving the Capital Project Sales Tax Commission is available here on the newspaper Web site. 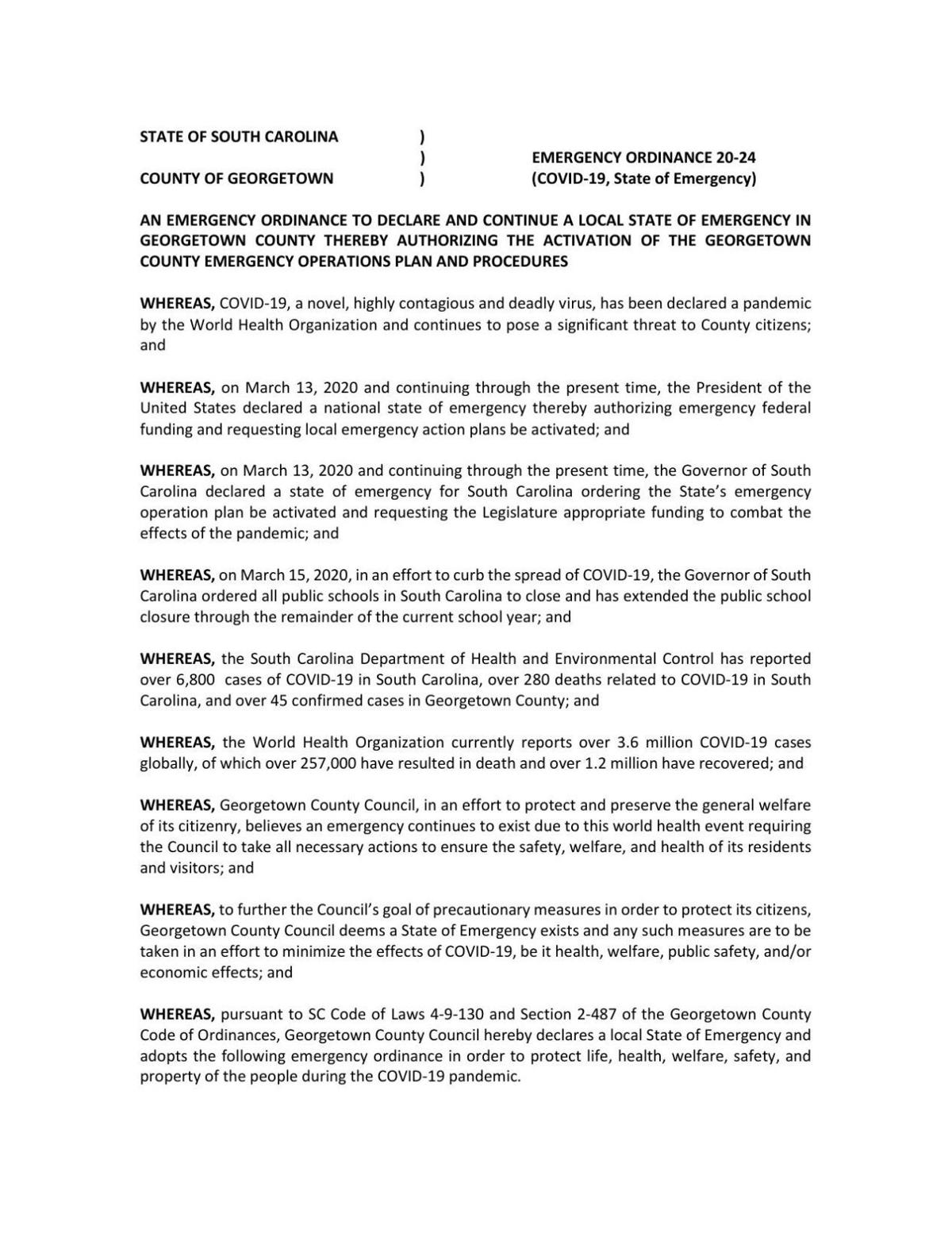