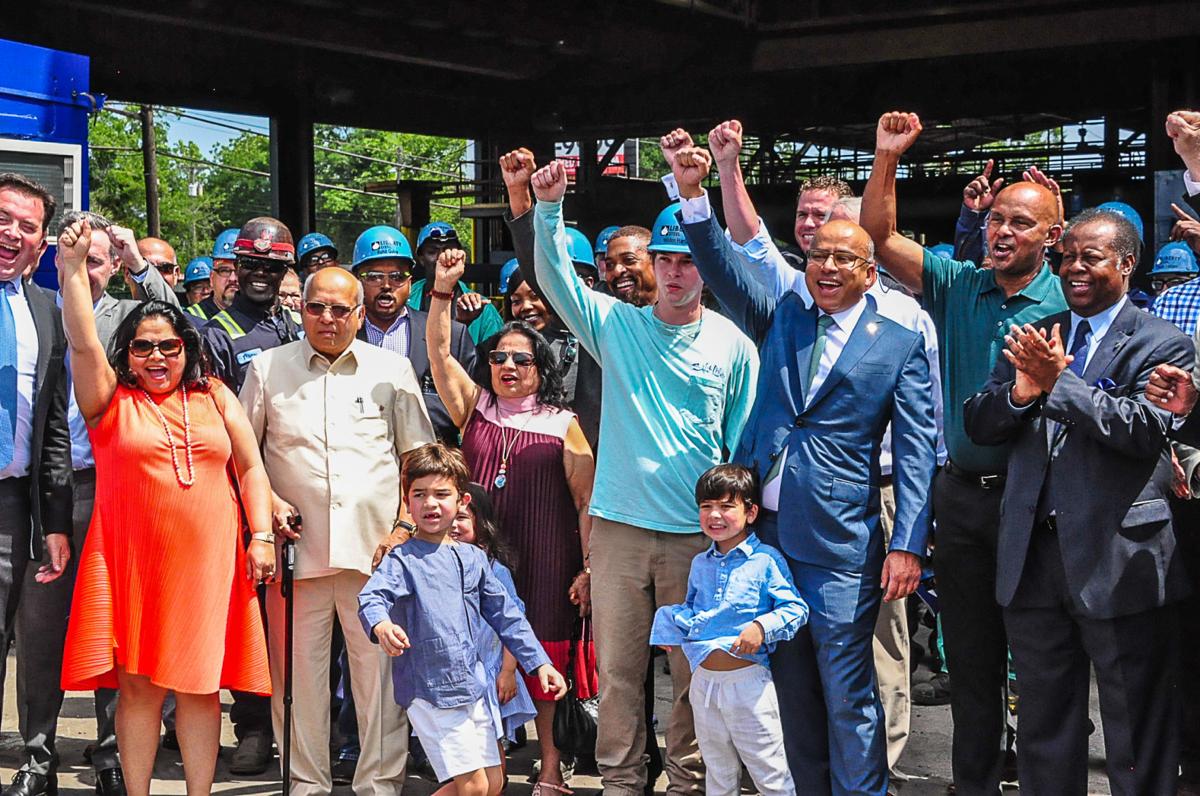 Sanjeev Gupta, blue suit, cheers along with members of his family, steelworkers and local officials during the June 25 celebration. Gupta's company is the new owner of the Georgetown steel mill. 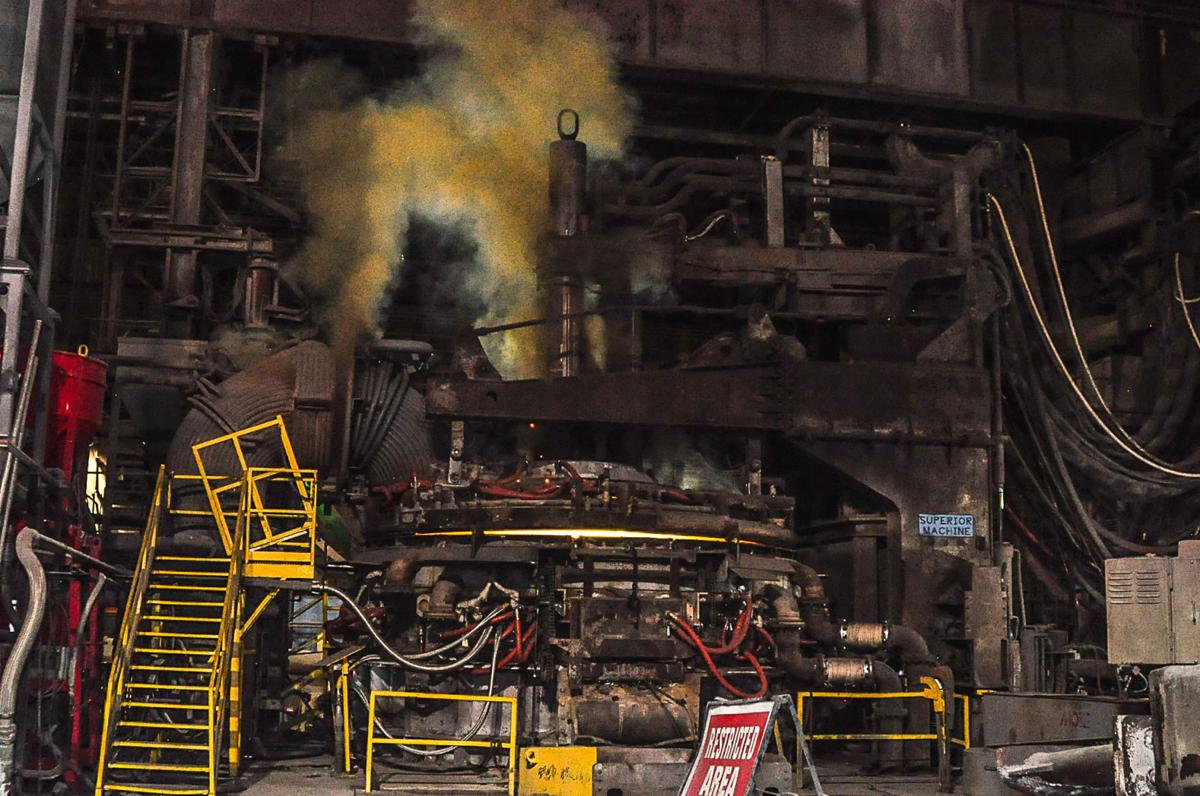 The electric arc furnace at Liberty Steel Georgetown is fired up on June 25. 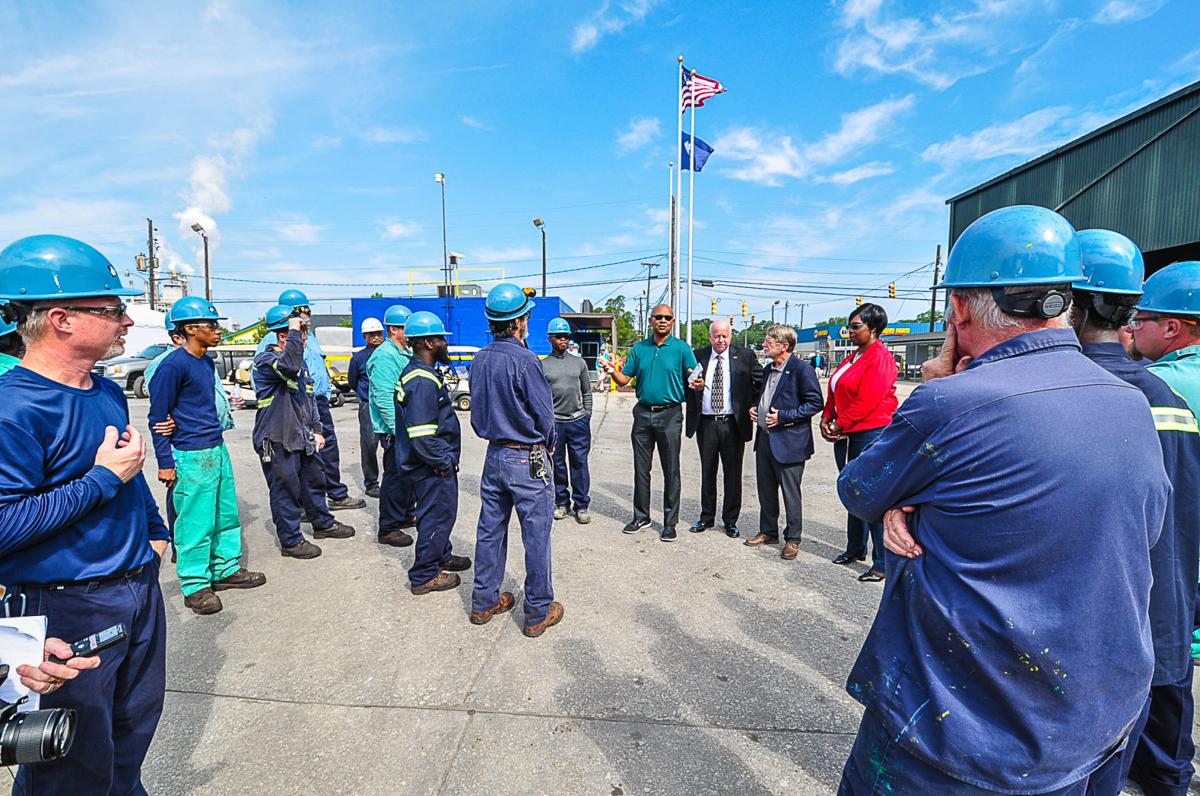 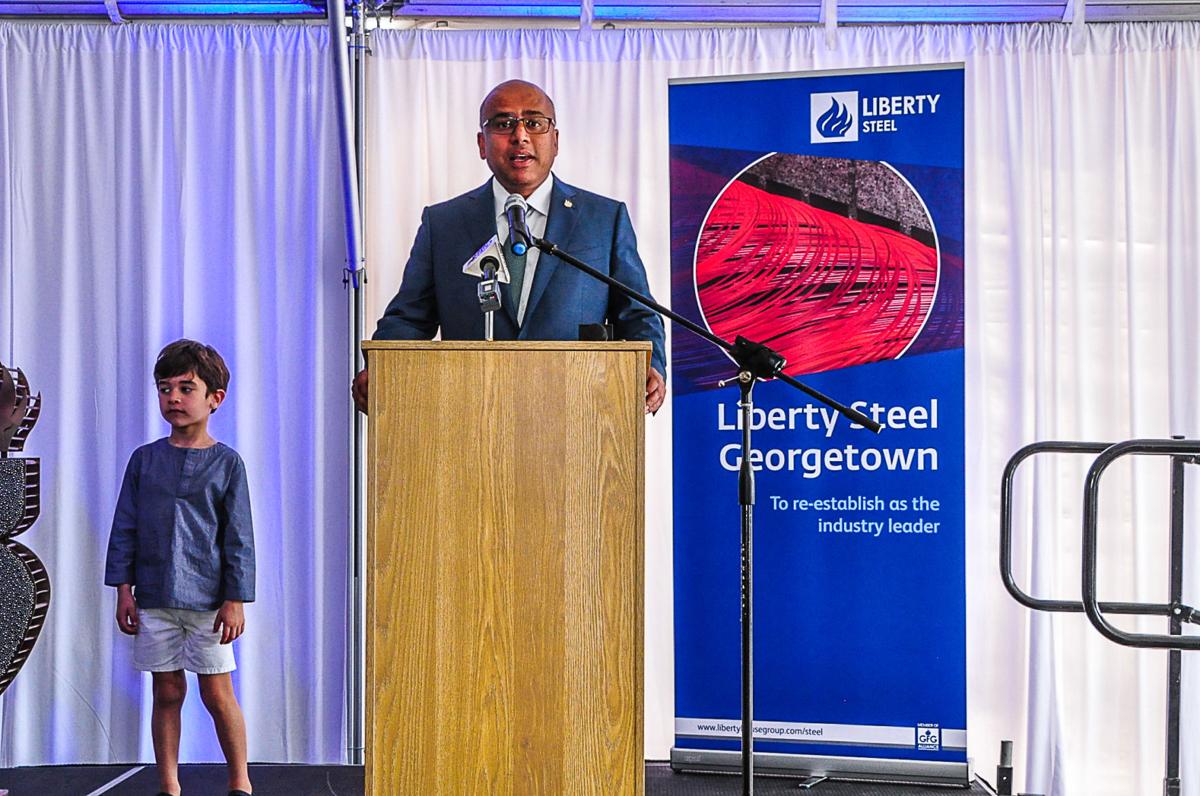 Sanjeev Gupta, executive chairman of GFG Alliance, speaks during a ceremony marking the restart of the Georgetown steel mill on June 25. Next to Gupta on stage is one of his sons. 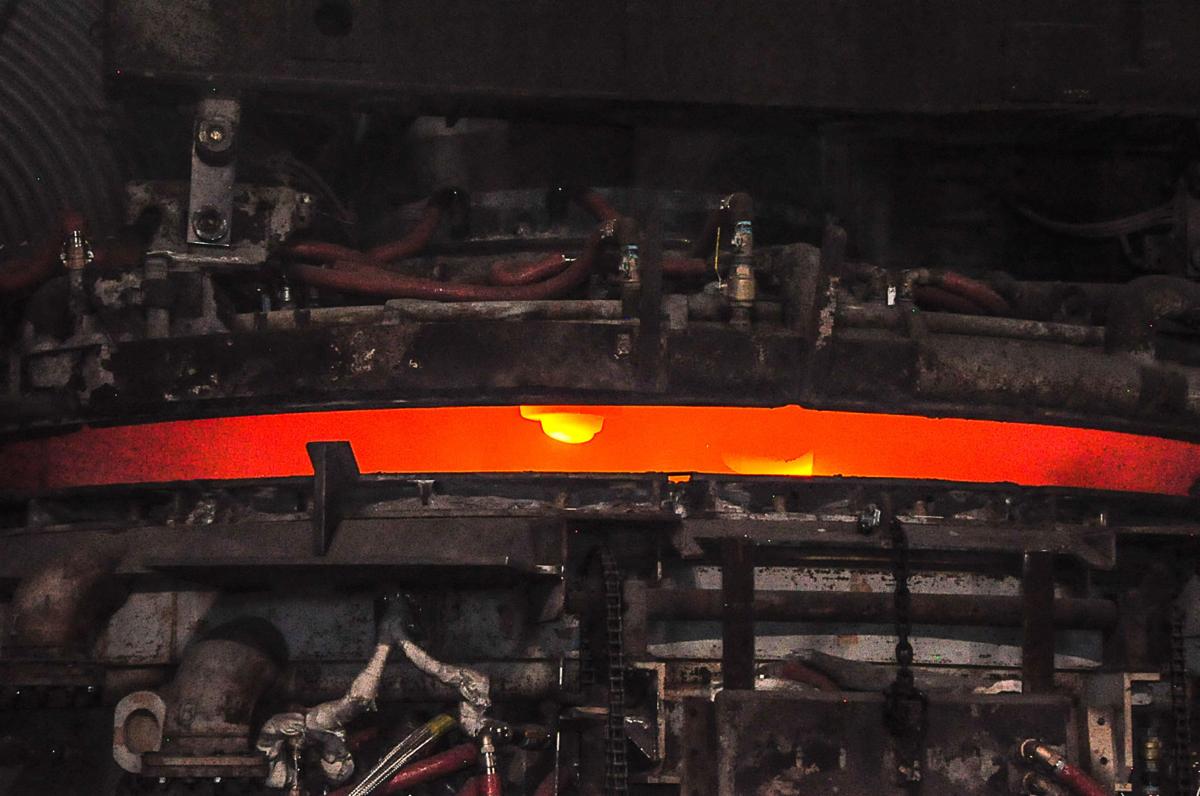 A close up of the electric arc furnace at Liberty Steel Georgetown. 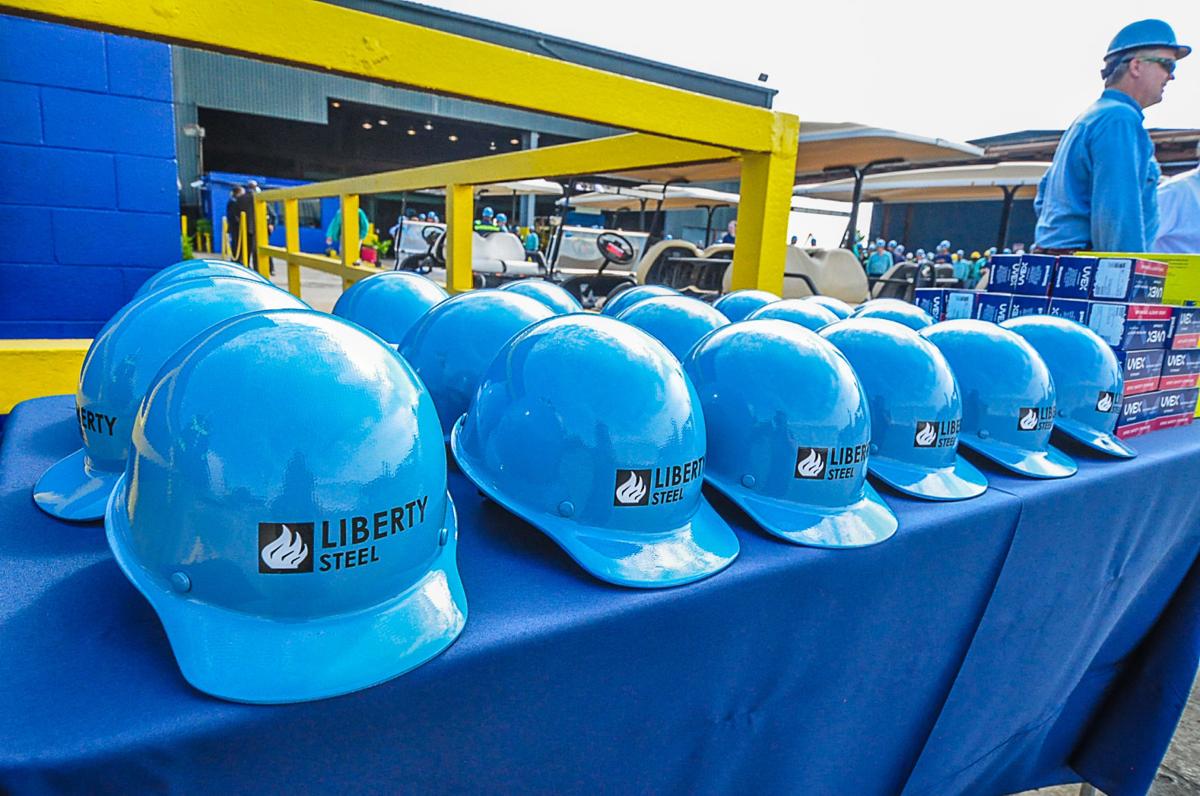 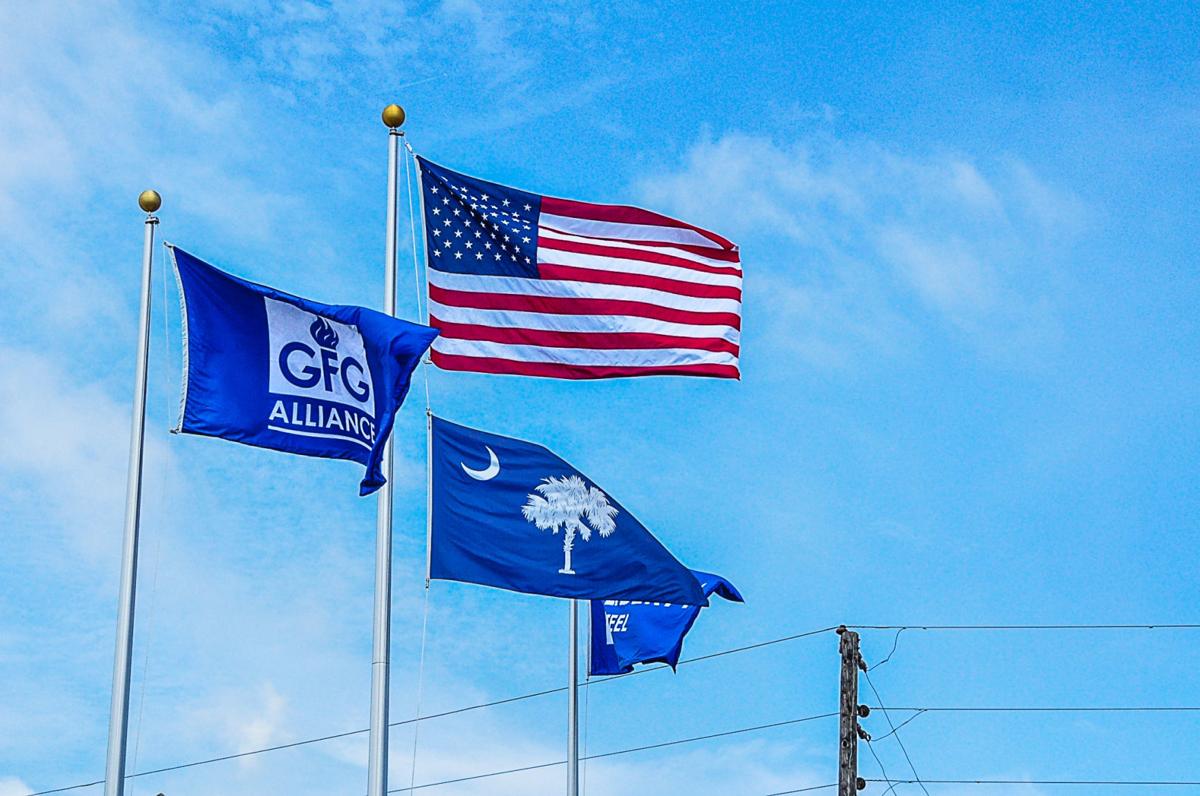 Sanjeev Gupta, blue suit, cheers along with members of his family, steelworkers and local officials during the June 25 celebration. Gupta's company is the new owner of the Georgetown steel mill.

The electric arc furnace at Liberty Steel Georgetown is fired up on June 25.

Sanjeev Gupta, executive chairman of GFG Alliance, speaks during a ceremony marking the restart of the Georgetown steel mill on June 25. Next to Gupta on stage is one of his sons.

A close up of the electric arc furnace at Liberty Steel Georgetown.

Under an intense blaze from the summer sun, and to the applause of steelworkers, executives and local officials looking on, two large, blue flags rose above the Georgetown steel mill on Monday morning, marking a new era in the plant's 50-year history.

One flag was emblazoned with "Liberty Steel." The other with "GFG Alliance," the new owner of the wire-rod mill. Monday's event marked the official restart of operations at the facility, which its British-based owner says is the beginning of a large-scale investment in the American metals industry.

It's been nearly three years since the mill's previous owner, ArcelorMittal, shuttered the plant, leaving hundreds of workers without jobs. But already, Liberty Steel Georgetown says it has 125 workers on site, including many who were there in 2015.

GFG, which has more than 10,000 workers globally, says it has plans for a series of projects across the U.S. and Canada totaling more than $5 billion -- including $1 billion in the coming year to acquire and develop steel, aluminum, engineering, mining, energy generation, and financial services assets.

The company has already purchased a scrap metal business in Florida and named a chief investment officer for the U.S. market.

Sanjeev Gupta, GFG's executive chairman, was joined at Monday's ceremony by his mother, father and sister, his wife, Nicola, and the couple's young children, sons Jai and Hari, and daughter, Maya.

"Thank you all very much for being here to share this great, special day with me," Gupta told the crowd.

He said the goal is to return the plant to its "former glory" of producing quality steel for the American market.

Gupta compared the Georgetown mill with Liberty's first steel mill in Newport, Wales. Similar to the situation in Georgetown, the Newport plant had been closed by a previous owner before GFG acquired it.

"Reopening a closed down steel plant is a very special feeling," Gupta said. "When you see something coming back to life, it has a special place in itself."

In Newport, like in Georgetown, there was concern and skepticism over restarting the mill, Gupta said. But, he added, it has been a success story, just as he hopes it will be in Georgetown.

"We look for local resources, domestic scrap — countries like America have an abundance of accumulated steel." Gupta said. He added that the company looks to use renewable energy where it can.

Growing and developing the domestic workforce is a top priority for his company, he said.

Work has been ongoing at the mill since the early part of this year. The buildup to the restart gained steam in recent weeks, officials said. One of mill's electric arc furnaces was restarted for the first time on Friday ahead of Monday's ceremony. And full production will begin in the coming weeks.

Gupta said the goal is to bring the mill back to its full capacity, producing around 700,000 tons of steel annually. That would include a workforce of 320 people, he said.

James Sanderson, longtime president of the local chapter of the United Steelworkers, told the audience, "Today is a very wonderful day here in Georgetown, South Carolina."

He reflected on the shutdown in 2015. "It was sad day for more than 200 workers who would be laid off," Sanderson said.

He thanked Gupta and his company for bringing back the jobs at the mill.

"The workers have done a great job at getting this plant fixed, and getting it repaired, to where we can start making good-quality steel," Sanderson said.

Georgetown Mayor Brendon Barber supported reopening the mill throughout his election campaign and voted against a controversial rezoning of the site. On Monday, he called it "a great day for Georgetown" and said it's wonderful for workers and their families to have the mill reopen.

City Councilman Clarence Smalls said having the mill in operation is vital to Georgetown's economy.

Councilman Al Joseph, who voted in favor of the rezoning, said he hopes the owners can make the mill successful for 100 years. Officials have said the new zoning allows the mill to operate indefinintely

State Sen. Ronnie Sabb said with the mill reopen, it will boost the argument for officials trying to secure funding for dredging the Port of Georgetown.

"This shows economic support for the project," he said.

Georgetown County Administrator Sel Hemingway said it's exciting that the mill will be producing steel again.

"Good to have the employees back," he said.

Also attending Monday's event was Barbara Joye, a Georgetown native who worked at the plant for 45 years from when it first opened until 2015. Gupta presented her with flowers, and Joye said she's excited to see what the future holds for the mill, and for Georgetown.