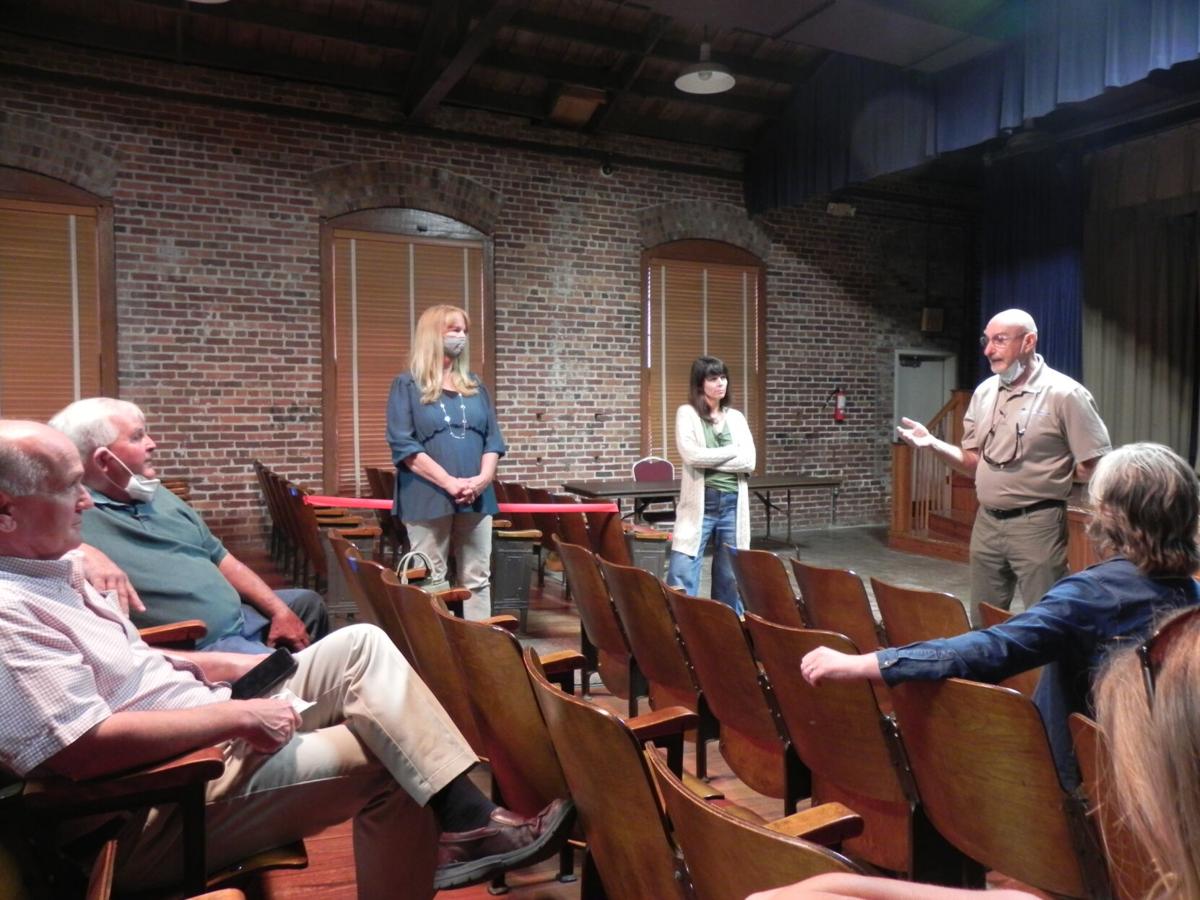 Berry Coggeshall, left, and Mike Tisdale are both members of the Black Scenic River Advisory Council. Rick Huffman, standing at right, responds to some of their concerns about littering and trespassing on private property. Tommy Howard/Staff 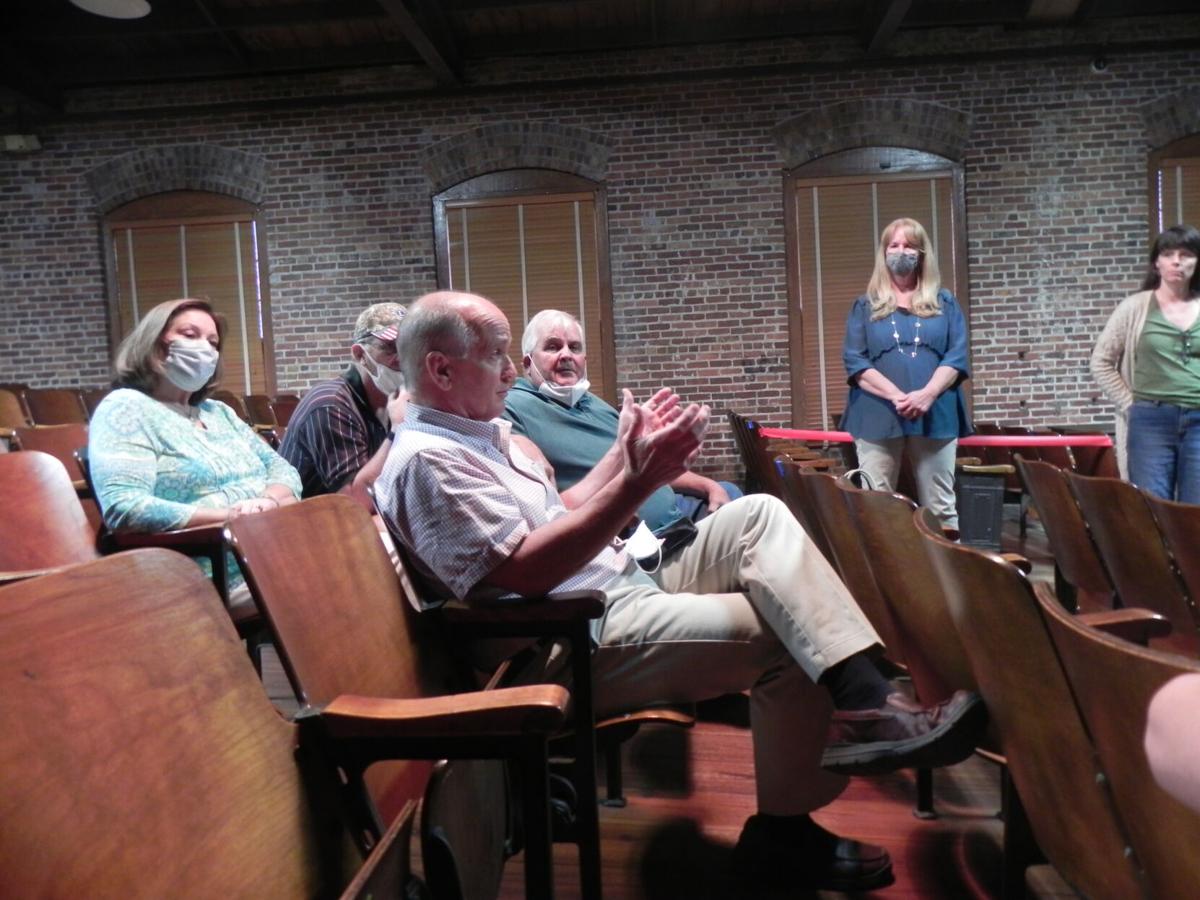 Berry Coggeshall makes a point about keeping pristine land that way and avoiding overuse of public lands. He and Mike Tisdale, next to him, shared their concerns about littering and about keeping the beauty of the Black River intact. Tommy Howard/Staff

Berry Coggeshall, left, and Mike Tisdale are both members of the Black Scenic River Advisory Council. Rick Huffman, standing at right, responds to some of their concerns about littering and trespassing on private property. Tommy Howard/Staff

Berry Coggeshall makes a point about keeping pristine land that way and avoiding overuse of public lands. He and Mike Tisdale, next to him, shared their concerns about littering and about keeping the beauty of the Black River intact. Tommy Howard/Staff

EDITOR’S NOTE: This is the sixth in a series of articles about a proposed new state park. Other articles have included comments from several public meetings. There will also be looks at several of the properties that would be included in the “Black River Water Trail & Park Network.”

Several community meetings have been held, and assorted consultants are looking into land use, funding, programming, accessibility and much more.

The Black River begins near Bishopville in Lee County and runs through several others. It goes by Kingstree and Andrews and then meanders on its way past Rocky Point Community Forest in the Choppee community and on to Georgetown and Winyah Bay.

About half of the 151-mile length of the river was classified as the Black Scenic River 20 years ago, Much of that area is being considered for a unique park in South Carolina. Rather than being contiguous or all the parts touching one another, various parks, boat landings and preserves – both public and private – would make up a network of facilities.

“The only way you can protect the Black River is to keep people off it.” So said Mike Tisdale, who’s a Williamsburg County landowner and is a former vice chairman of the Black Scenic River Advisory Council. His comments came at a meeting in Kingstree in mid-May.

“If it’s not policed and patrolled, you cannot open it up 24 hours without having it patrolled 24 hours,” he said. “My family has been associated with the Black River for 200 years.”

Tisdale has served on the Advisory Council for at least a dozen years.

“You don’t have a wilderness area and then put a road in the middle of it,” Tisdale said. “People own the river, but once you leave your boat you are trespassing.”

He went on to say he wants people to enjoy the river, but they need to respect private property.

Tisdale related a time when he came across some hunters on his land. The folks were nice, he said, but they just couldn’t believe they couldn’t come onto his private property any time they wanted to.

Tisdale told the hunters they could call him ahead of time when they wanted to hunt, and they might be able to do it, but they had to have permission first.

Berry Coggeshall also owns property that is adjacent to Tisdale’s. Coggeshall is a contractor, Realtor and developer in Murrells Inlet. He and Tisdale each own land and their parcels together extend along about 7 miles of the Black River in Williamsburg County.

“The Black River is a pristine river,” Coggeshall said, and he wants people to enjoy it. “When you introduce traffic, it’s no longer pristine. You can love it to death.”

He’s worked on his land to develop good turkey hunting spots. It’s really aggravating, he said, when you go out on opening day of turkey season, you’re in your spot and ready to enjoy a day’s hunting, and then you hear – about 300 yards away on your own property – boom! And those people who’ve shot on your land can paddle away in their canoes before you can even get there to where they shot.

Coggeshall said he wants people to be able to enjoy the river, but trespassing on private property is a concern.

Litter and liability are also problems

Both Tisdale and Coggeshall said they’re glad for people to use the river, but they want people to be aware of private property.

They also said they spend time, just about every day, picking up bottles and cans and a lot of other litter.

“They talk about a beach sweep and river sweep – I do it every day,” Tisdale said. “We own an island. We don’t want to keep people off, so long as they keep it clean.”

Several people said the sites need to be posted.

“A canoe is on public waters, but private land is private,” a man said.

When someone comes on private land, Tisdale noted, that person is trespassing. Still, there are liability issues that can come up even though the person may be trespassing on the private property.

Rick Huffman is one of the consultants helping with the overall research and planning for the proposed state park.

He acknowledged that trash is a serious concern around the state. He added that he is helping to put together a “trash summit” of people and agencies from around South Carolina. That group will try to come up with ways to help reduce trash and litter. Huffman said he would share whatever information he gets from that summit with the Black River group.

“We will turn over every stone, and make good common-sense judgments here,” Huffman said, “and protect these landowners.”

“There’s nothing more sacred than that, and we take it serious.”

“We care about the resources as much as the landowners do. That’s just the way we are. My company was founded on that principle.”

Huffman is on several other statewide boards and he plans to work with others. “It’s an issue that’s not just focused on the Black River. It’s across the state. It’s got to be better.”

For more information about the proposed water trail and park, and to take two online surveys, go to this link for “Connecting to South Carolina’s Black River” at https://tinyurl.com/BlackRiverMap.