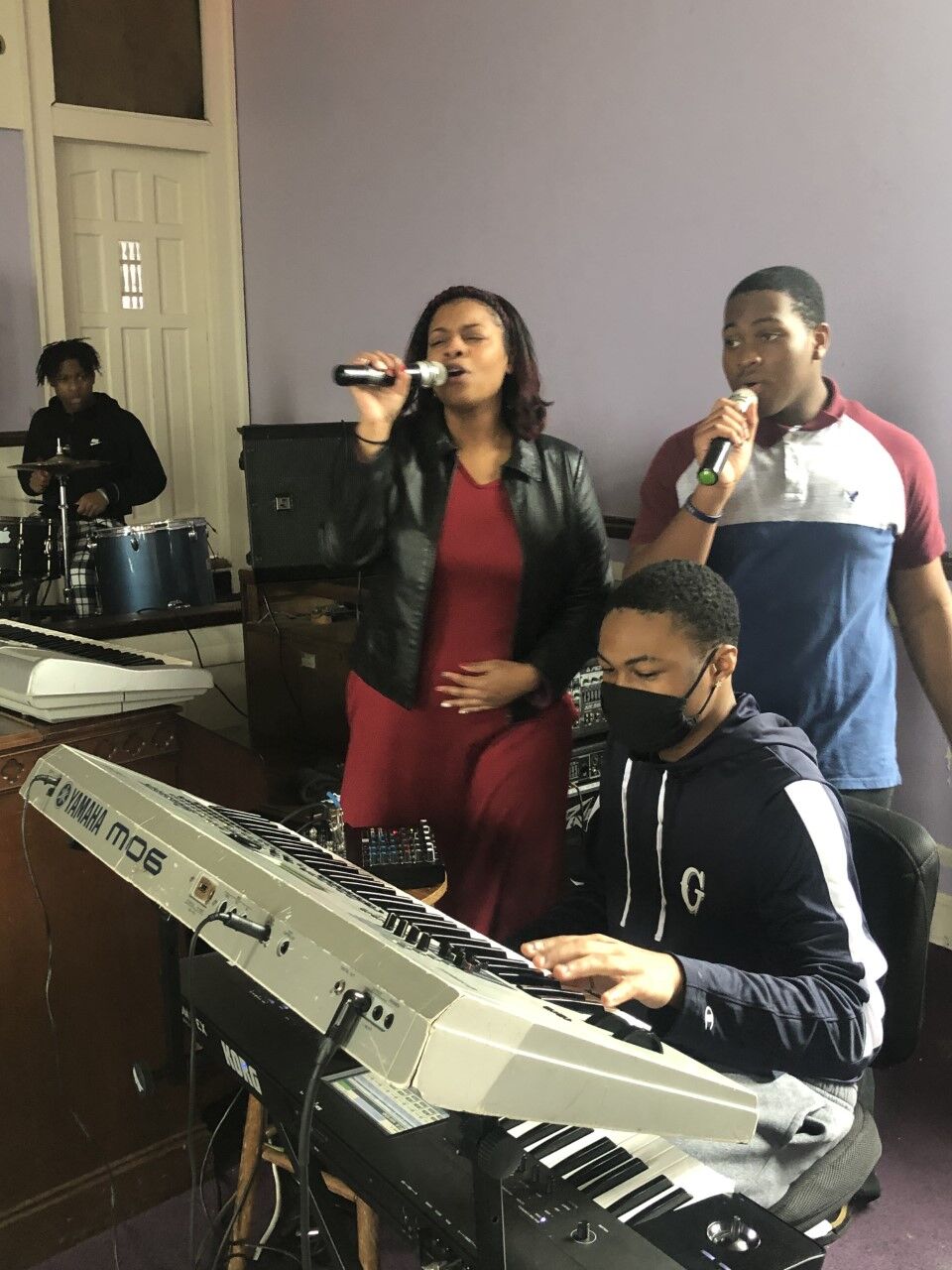 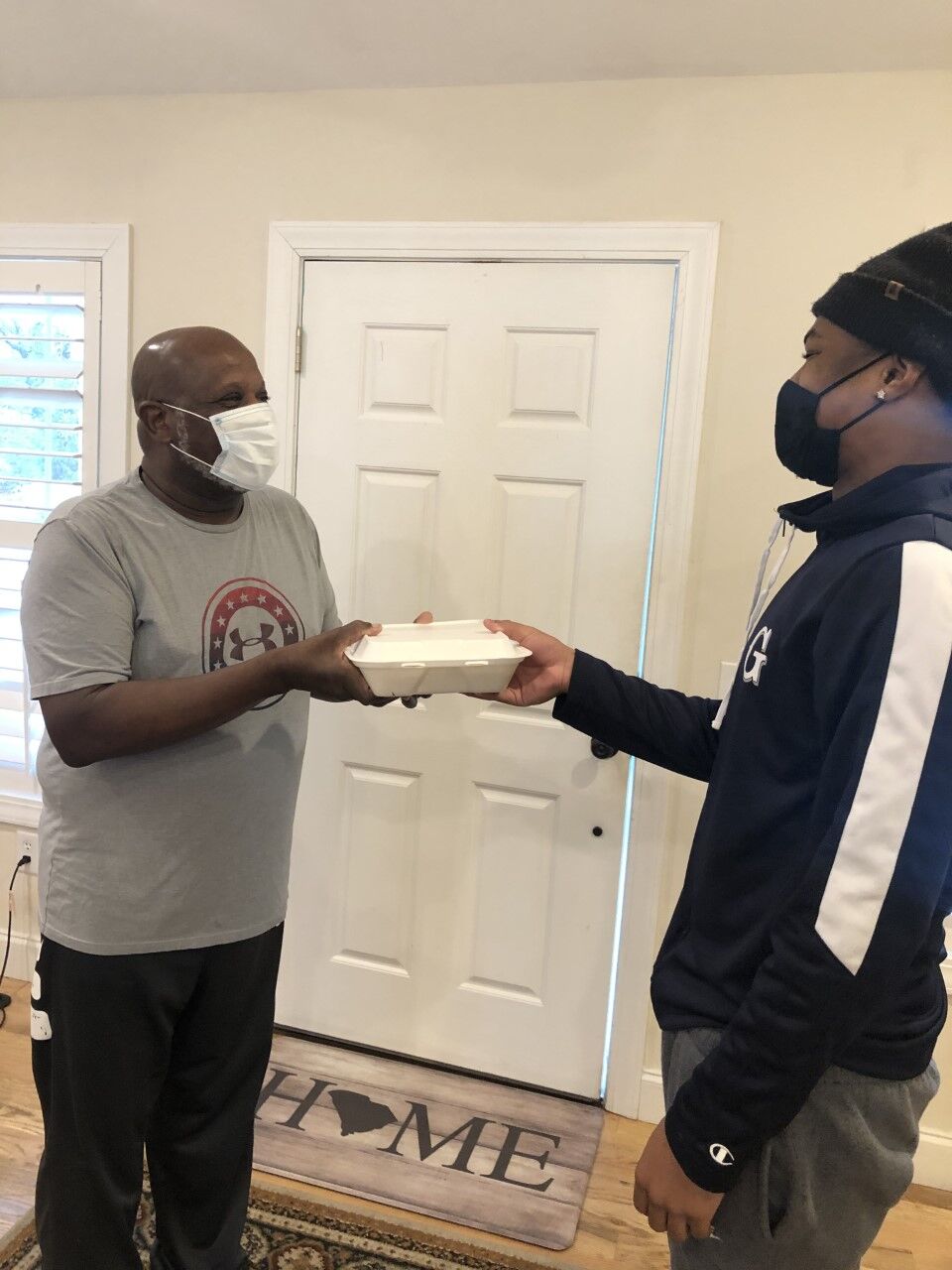 Omar Mitchell, right, delivers food for Full From the Father, a program that delivers food to those in the Georgetown community who need it. Richelle Frasier/Provided 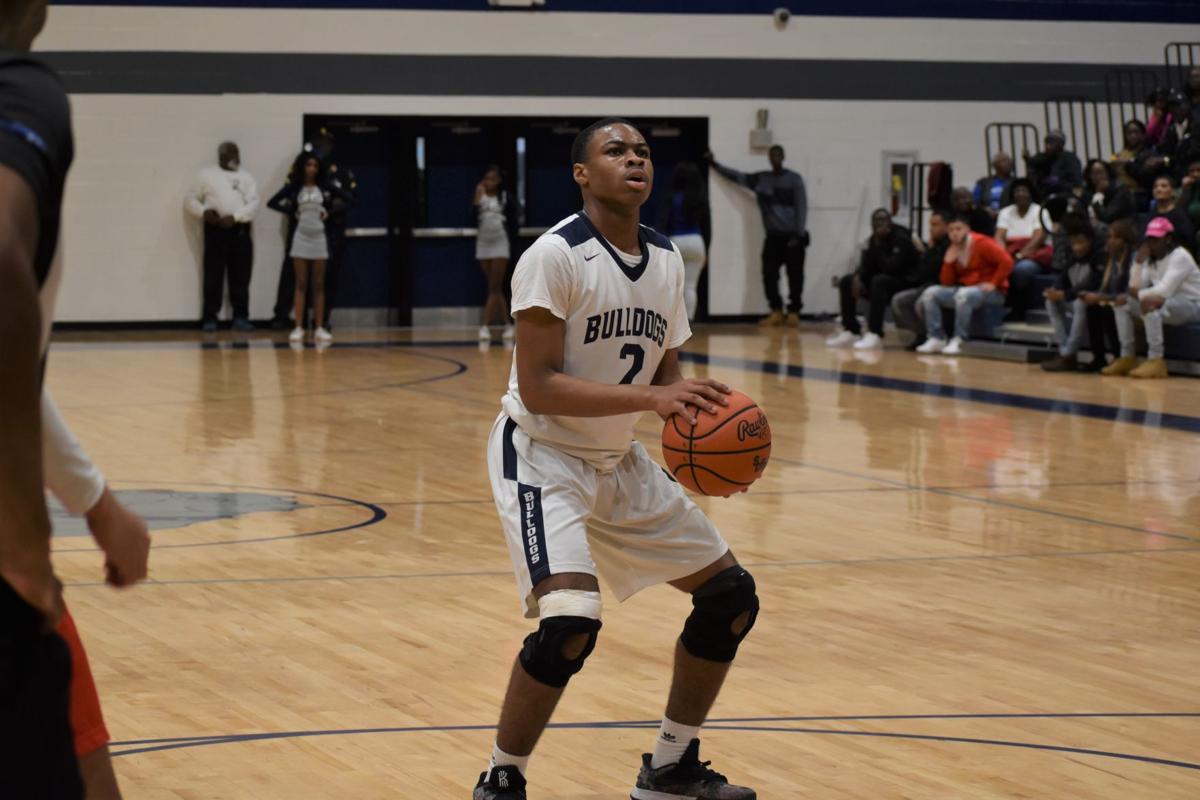 Georgetown junior guard Omar Mitchell prepares to shoot a free throw during the Bulldogs’ 61-43 home loss to Cheraw on Tuesday, Feb. 18, 2020, in the first round of the SCHSL 3A boys basketball state playoffs. Mitchell scored five points for Georgetown. Danny Kelly/Staff 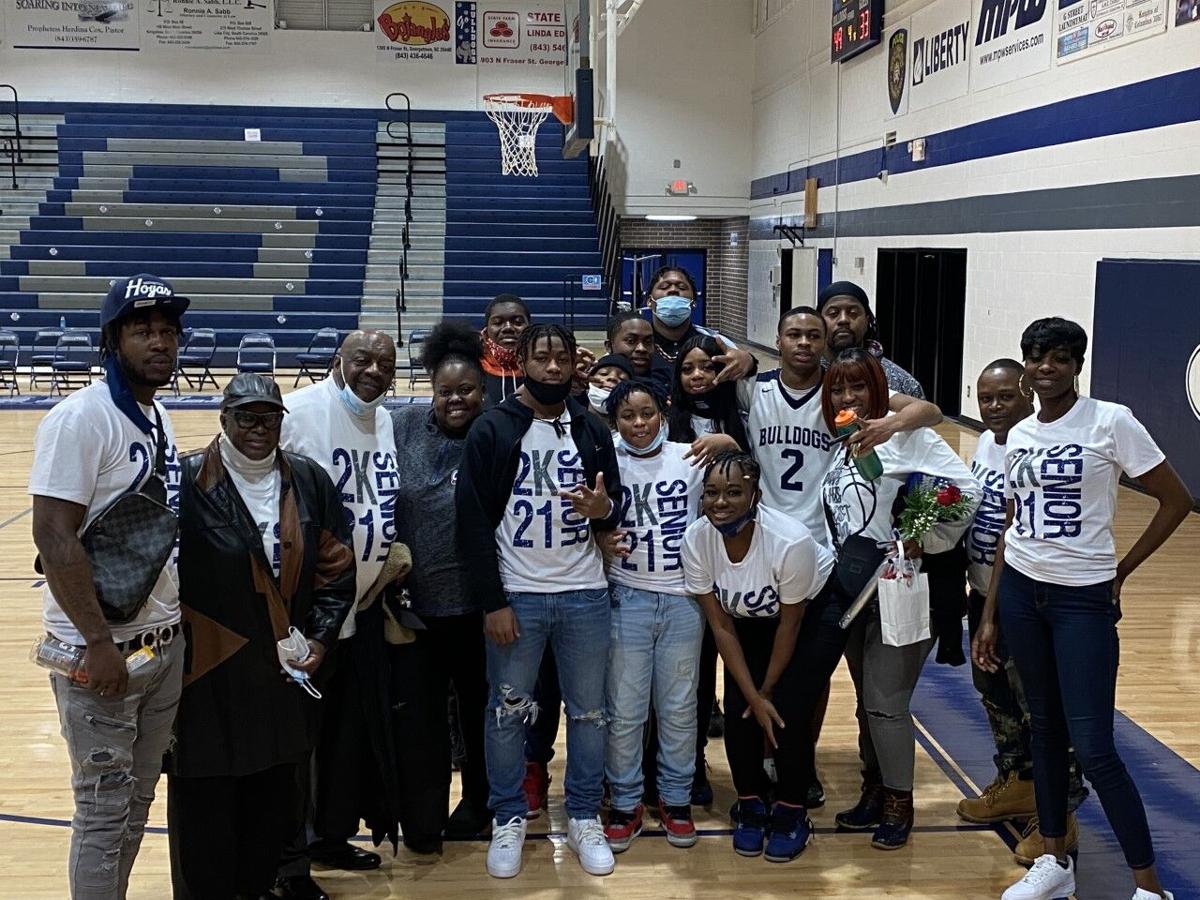 Omar Mitchell, right, delivers food for Full From the Father, a program that delivers food to those in the Georgetown community who need it. Richelle Frasier/Provided

Georgetown junior guard Omar Mitchell prepares to shoot a free throw during the Bulldogs’ 61-43 home loss to Cheraw on Tuesday, Feb. 18, 2020, in the first round of the SCHSL 3A boys basketball state playoffs. Mitchell scored five points for Georgetown. Danny Kelly/Staff

GEORGETOWN — Three times per week, Omar Mitchell has a doctor appointment he must make.

So Omar drives him there and back.

No hesitation. No complaining. Just love and respect.

Richelle isn’t a stranger to Omar’s help, as the Georgetown High School senior works at the Pawleys Plantation Golf & Country Club to help his single mother.

The eldest of five boys, he doesn’t have to ask for respect from his four kid brothers — he’s earned it many times over.

“His little brothers look up to him. He’s a loving, caring young man and I really do think the community looks at him as one of their own,” said Eric Sparkman, in his first year as Omar’s basketball coach at Georgetown High.

“He welcomed me when I first got here and treated me like he knew me for years.”

With a soul built upon his deep faith in God, Omar has grown a reputation for putting others first — be it his family, on the basketball court where he leads the team in assists or even as a youngster on the soccer pitch.

As a 12-year-old, he dominated his opponents in the Upward soccer league, scoring at will.

But Omar always wanted his teammates to score before he did, according to his grandfather and pastor, Rev. Richard Foster.

Toward the end of the season, Omar had a teammate that hadn’t scored all season.

When that teammate checked into the game, Omar ran over to him and said.

“I’m going to make sure you score a goal today.”

And he did, passing up a wide-open shot for himself, dishing the ball off and watching his teammate score.

He’d receive the Christ Life Award from Upward soccer, the highest award you can receive in the program.

But not for scoring goals, but for being a team player and inspirational leader.

“He’s going to make things happen because he’s got a big heart. He loves people.”

In many ways, that comes from his devotion to his church, the Love Chapel Deliverance Center.

He plays the keyboard and organ, volunteers at Full From the Father, a church event that helps feed those in the community on the third Thursday every month. He’s also a Sunday School regular.

Richelle marvels at his commitment, watching the teenager race home, take a shower and get right to church on the weekends, while also doing the same after exhausting varsity basketball practices.

For Omar, it’s not even a choice.

“I make time,” Mitchell said. “God comes first, so I have to go to church, and then basketball, I love it. During the weekends after practice I’ll go to work, and after church I’ll go to work. If I (don’t) have work, I’m working on my (basketball) skills and getting better every day.

“I just manage my time so I can get better as a young man.”

Omar’s ability to prioritize his own life has made him the perfect on-court coach for Georgetown High School, taking his captain status seriously, particularly during a season when the COVID-19 pandemic has caused unexpected disruptions.

Omar is the facilitator on the basketball court as its assists leader, but also its last line of defense, leading the team in blocks.

“He could’ve averaged 15, 20 points a game, but he’s one of those guys like Magic Johnson,” Rev. Frasier said.

“He gets more joy out of passing it and seeing you make the basket than him making a basket as long as we win.”

Walker has also seen Omar grow in understanding that sometimes a leader has to take control and lead by example, meaning that the senior does have to score more often in order to help his team.

As a junior, Omar was more comfortable hustling and doing “all the little things,” according to Walker. But with the team’s top three scorers graduating or transferring in the spring, Omar took control.

“His improvement is what has made this team play good basketball. I didn’t see it coming; I’m very happy it’s here,” Walker said.

Omar put in considerable work over the summer, pinging Sparkman to let him know the hours he was pouring into the game, just wanting to earn his status as captain.

“He actually advanced his game so that he could be an asset to this program,” Sparkman said.

His role as captain comes with plenty of responsibility, as players look to Omar for guidance, even off the court.

Through watching game film, studying together and holding each other responsible, Omar has been able to help keep Georgetown High above .500 on the season.

“I encourage them every day that we need to get better so we can make it to the big stage,” Omar said.

While Sparkman is keeping the coaching seat warm for now, he sees Omar as the type of person that could return to the halls of Georgetown High and take over his job.

“He definitely will be missed at Georgetown High School,” Sparkman said.

“Hopefully with years to come, he’ll come back home and continue to be the positive role model and hopefully one day take over the program here at Georgetown High School.”