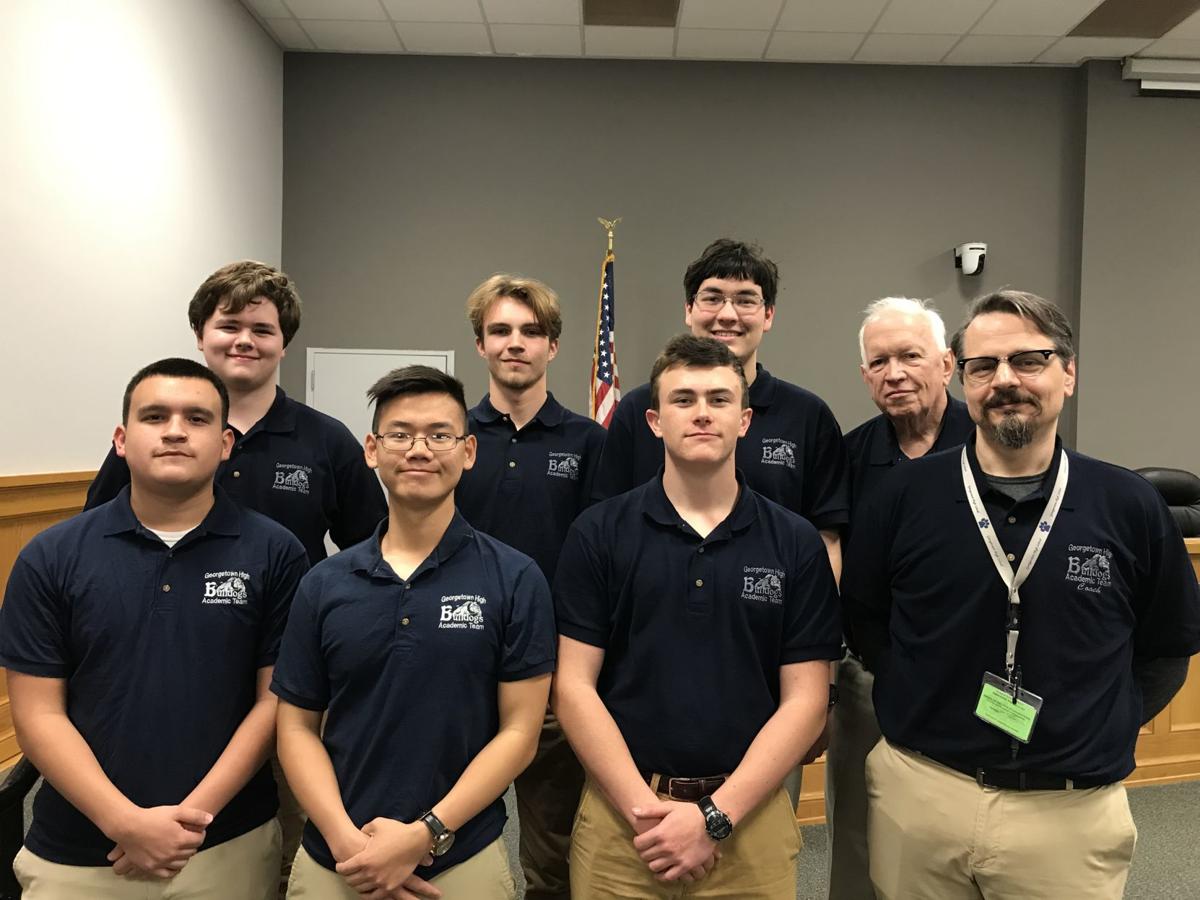 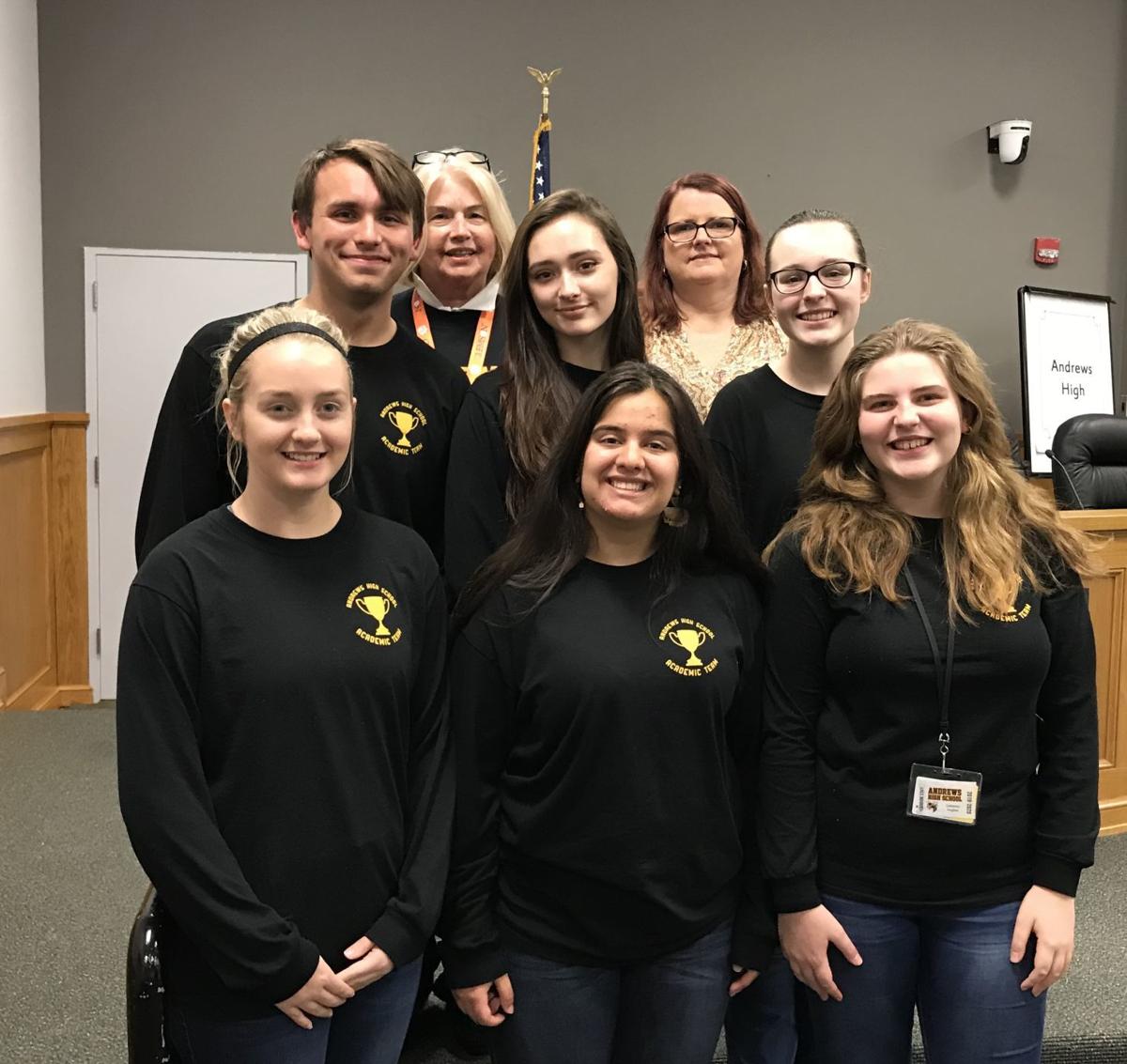 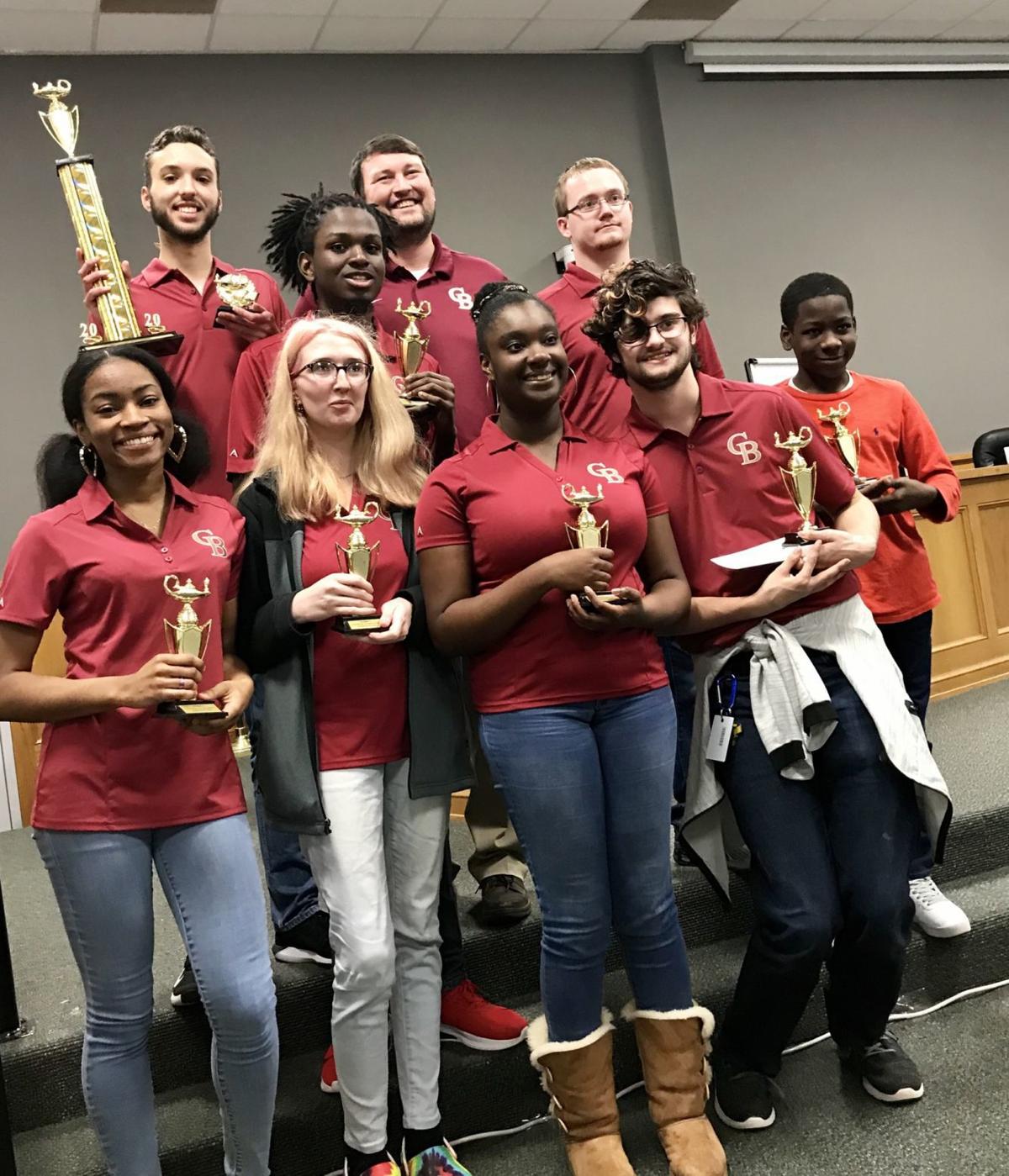 Scholars from the four county high schools came to the Georgetown County School Board Office on Fat Tuesday ready to rumble--respectfully and intelligently. Requiring fewer commercials than the Super Bowl and less clean-up than the Puppy Bowl, the 6-student teams competing in the gruesome GCSD Senior Academic Bowl demonstrated not only the lasting benefits of education and knowledge, but those of teamwork and mutual goodwill.

Waccamaw High Coach Brad Kibler was pleased with the performance of his Warriors who opted for white dress shirts and red neckties as their uniforms. “They’re a great team. I’ve enjoyed every minute I’ve had to spend with them. It’s fun watching them compete; they have fun with each other,” said Kibler after the February 25th event. “It’s everything academic team should be.”

Individual trophies for the most correct answers went to Justin Williams (5) and J.D. Donmoyer (9) from Carvers Bay High, Josh Fulton (7) and Justin Fuentes (10) from Georgetown High, and Wade Maring (8) and Covey Loftus (13) from Waccamaw High.

“It was very exciting up there; it was fun,” reflected WHS senior Zachary Rosenberg after joining his team to collect their trophy. Teammate Hunt Grafe echoed those sentiments, “The Senior Academic Bowl has always been super-fun and it’s just super-great to be a part of this team with guys like Wade and Covey and Zach. I’m gonna’ miss these guys when I graduate,” said Grafe. Fellow Boys State delegate and teammate Wade Maring responded, “It’s probably the favorite thing I’ve done in high school. I love the winning culture we have at Waccamaw—we always try our hardest and give it our best.” With equal enthusiasm, sophomore Steven Insignares commented on his preparation for the different types of questions. “A lot of the stuff is what I like to call common knowledge: you read it somewhere and it’s interesting so you remember it, but some stuff--that you learn in school, so you need skills from school to train and do good.”

Second-place Carvers Bay senior John Newman took time to analyze the meet and emphasize the bonds of goodwill across schools in the county. “I think it went pretty well. Waccamaw did a pretty good job—well they did excellent; I also want to give a shout-out to Georgetown who did a great job as well. My heart was beating to the Waccamaw challenges and also to the Georgetown ones. I would like to congratulate the all-stars of those schools too. Amazing job, guys!” concluded Newman. CBHS teammate senior Alexis Crockett highlighted the spirit of camaraderie by freely admitting, “This was really nerve-racking for me, but it was a really good experience. Waccamaw did awesome, so congratulations!” she said. Senior Captain J.D. Donmoyer remarked, “I’m glad to just be here. I’m proud of my team—thank you for everything and we did better than I expected.” Donmoyer leaves behind powerful junior Ja-Rez Turner who is ready to take over and lead the team next year. “Ja-Rez Turner inspired me to join,” said freshman Caleb Holmes “and I must say, I enjoyed it.” Coach Eric Haas also enjoyed his season and expressed gratitude for new principal Larry Odom who has been very supportive of the team and members. “We’ll be back next year to try to take the big trophy,” Haas said.

Despite losing several seniors, Georgetown High looks ahead with equal fervor. Lead by coaches Dr. Larry Gates and Brian Sweeney, Freshman Joshua Fulton plans on returning for another year of friendly competition where all are encouraged to do their best. When asked how he prepares for the challenging questions that loom ahead, Fulton calmly explains his philosophy, “I’ve always been naturally curious,” he said. “If I want to know something, I look it up, like geography and science.”