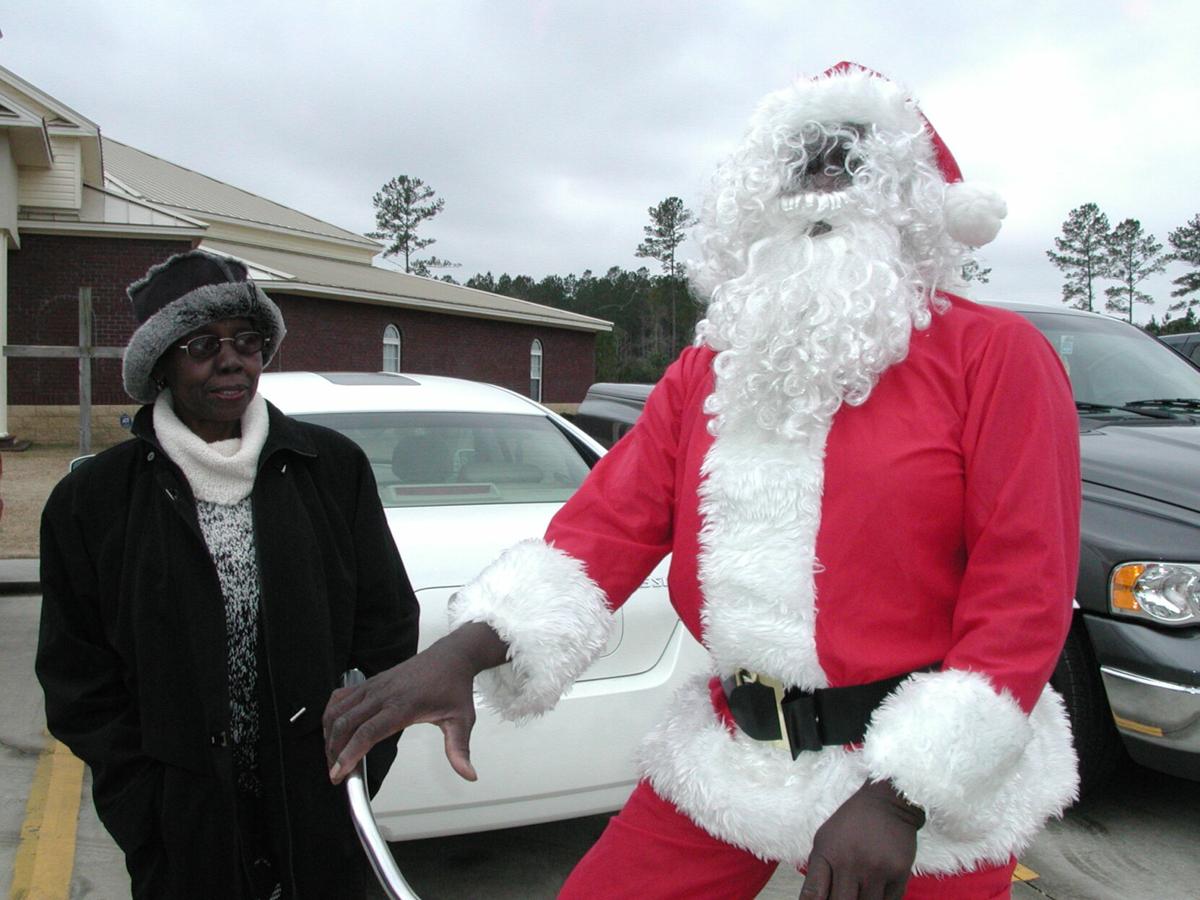 Silas “Bumsy” Cohens is a faithful reader of the Georgetown Times. He told a reporter for the newspaper how much he enjoys reading each issue. This was at a Dec. 31, 2005 New Year’s parade in his community of Dunbar / Oatland / Browns Ferry.

Lloyd Mackall put together a video of the Front Street Fire of Sept. 25, 2013. The fire destroyed eight buildings in the 700 block of Front Street. Staff of the Georgetown Times worked day and night to provide coverage of the fire, the many people and organizations that helped local firefighters, and the tremendous outpouring of support for the community. 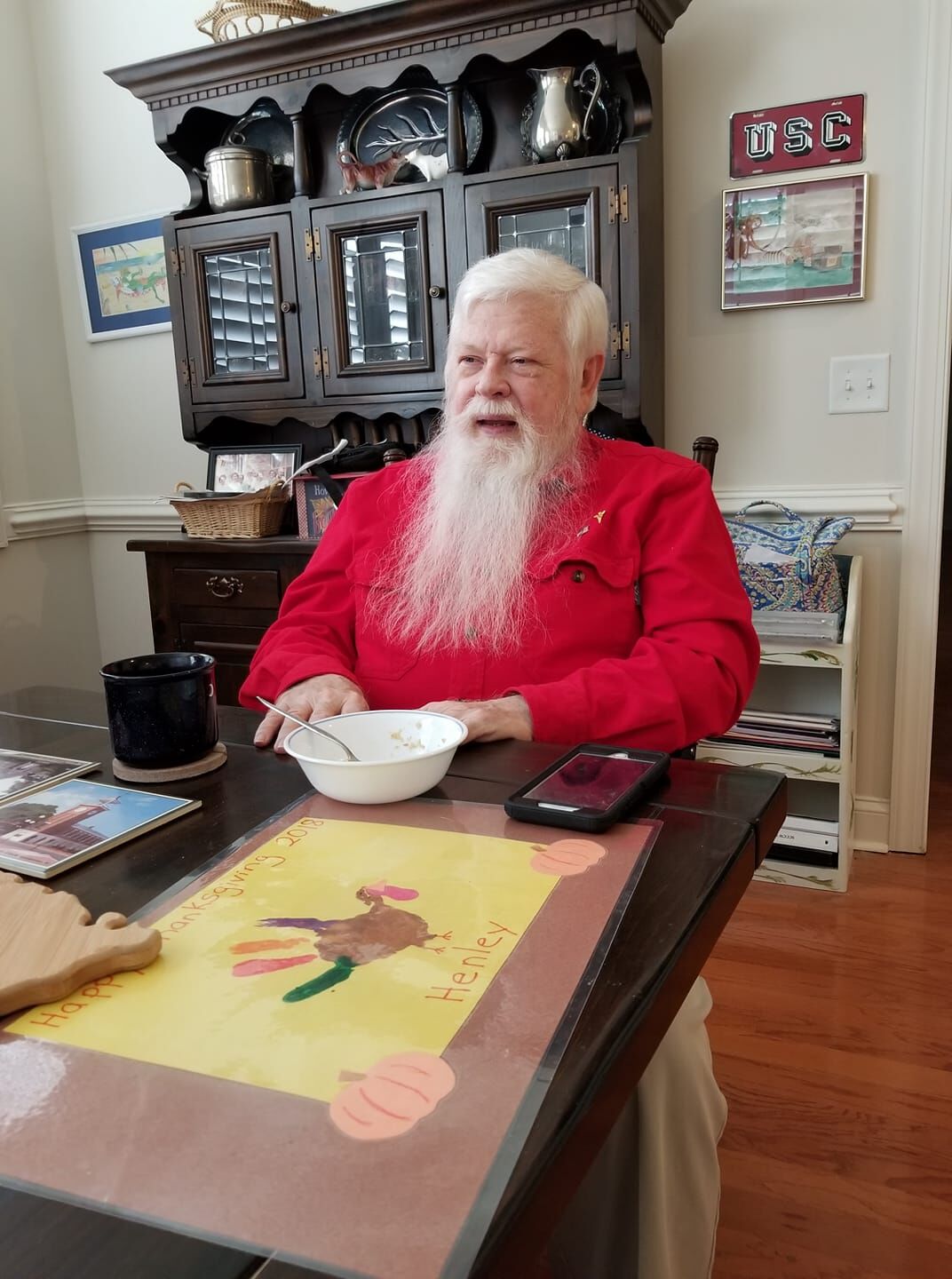 Tommy Howard started full-time as a reporter on February 1, 2000.

Silas “Bumsy” Cohens is a faithful reader of the Georgetown Times. He told a reporter for the newspaper how much he enjoys reading each issue. This was at a Dec. 31, 2005 New Year’s parade in his community of Dunbar / Oatland / Browns Ferry.

Lloyd Mackall put together a video of the Front Street Fire of Sept. 25, 2013. The fire destroyed eight buildings in the 700 block of Front Street. Staff of the Georgetown Times worked day and night to provide coverage of the fire, the many people and organizations that helped local firefighters, and the tremendous outpouring of support for the community.

Tommy Howard started full-time as a reporter on February 1, 2000.

Do you want to learn more about the history of Georgetown?

If so, there are plenty of resources. Lots of books have been written about our small city on the banks of the Sampit River and Winyah Bay, and our county. We have five museums in Georgetown, and we’re blessed with beaches, world-renowned Brookgreen Gardens and other protected lands and so much more.

Another place that folks continue to use for their study of local history is the 222 years of the Georgetown Times and its predecessor papers.

The oldest known issue of one of our earlier names – the Georgetown Gazette — was dated May 8, 1798. For many years, the masthead of the Georgetown Times proclaimed 1797 as the year of its founding.

Former editor Jesse Tullos explained that research showed the oldest printed issue in the direct lineage was the 1798 date.

When I was a kid growing up in Georgetown, Tom Davis bought the newspaper and served as publisher from 1955 until he sold it to the Post and Courier of Charleston in 1973. After the sale, he continued as publisher for a while.

The Waccamaw Times was added to the local mix in 1996. After several years, it was not produced for a while. Later, it resumed publication in addition to the Georgetown Times.

Tullos led the production of a special Bicentennial Issue of the Georgetown Times that was published on May 1, 1998.

What a trip down memory lane

In working on this column I wanted to hit some highlights of our 222 years of news of the day which has now become our history in Georgetown County.

That Bicentennial Issue reprinted many of the major stories that have occurred over the past couple hundred years. There’s also a number of other stories about day-to-day happenings in Georgetown County. Once you start reading all these fascinating looks back, it’s hard to put it aside.

On page 2 and page 18 of the PDF version of that special issue, Tullos outlined the names and dates of the paper. He also listed owners, publishers and editors as changes were made. Since 1921, the paper has consistently held the name Georgetown Times.

Interestingly to me, when I was named editor of the Georgetown Times in 2011, I checked around to try to find out if any other editors were born and raised in Georgetown, as I was. In talking with several folks who had researched the matter, we figured that at least for the 20th and 21st Centuries, I was the only editor who grew up here. In re-reading the Bicentennial Issue and the timeline of the newspaper, I see that there was one other person who was born and grew up in Georgetown who served as editor. John W. Tarbox was part owner and publisher from 1856 to 1870. For the first two years of his time, he was also the editor.

I first did some freelance writing for the Georgetown Times in December 1999 and January 2000. I started full-time as a reporter on February 1, 2000.

In my first week at the paper, I had one two-hour period with nothing in particular to do. That “down time” never happened again.

Former reporter Scott Harper and I shared a South Carolina Press Association Public Service Award for a long and complex series of stories about the School Board and its financial practices.

I’ve written my fair share of engagement and wedding announcements, births and obituaries.

When a new publisher came to the paper around 2007 or 2008, we changed from a three-days-per-week paper to publishing five days a week. During that time, I served as state editor. Along with continuing to cover some local stories, I also was responsible for state-wide and national news that we covered.

When we had a couple of changes in our sports coverage, I was assigned those duties. I’ve not been a big follower of sports, but I learned a lot about local high school and middle school sports and added in coverage of outdoor activities, including hunting and fishing.

In 2011, I was named editor of all our papers. By that time we had grown to continuing with the Georgetown Times, had brought back the Waccamaw Times, added in the Inlet Outlook newspaper and the County Chronicle newspaper.

The Georgetown Times went to twice-weekly publication when we added the Inlet Outlook, which focused on Murrells Inlet / Garden City Beach..

Along the way, we added a Web site, a Facebook page and Twitter feeds. Our online presence grew and flourished.

During this time my wife Ruthann dealt with three rounds of cancer over about six years. As we dealt with surgeries and chemo at the Medical University of South Carolina in Charleston I also reached retirement age. I retired in mid-March 2014, and Ruthann and I had about 18 months together before she died in September 2015.

Over the next year or so I did a little freelance work, and since the Spring of 2017 I’ve been back covering Georgetown County Council, the Town of Pawleys Island, numerous special events and features and whatever else may need coverage for our communities.

As you’ve no doubt seen in print and online, the Georgetown Communications family of papers are changing. We will become the Post and Courier/Myrtle Beach and Georgetown Times. The current news staff is increasing with four more reporters helping to provide expanded coverage for Georgetown and Horry counties.

In 1905, the City of Georgetown celebrated its centennial as an incorporated town. In 2005, I helped provide significant coverage of the City’s bicentennial. Among other things, a marker was placed at Rainey Park on Front Street at King Street.

During the War Between the States – the Civil War – then publisher John W. Tarbox suspended the newspaper as he went off to serve in the Confederate Army. On his return he resumed publication of the Pee Dee Times, the name of the paper at the time. Because of that, there are no issues of the paper during that four- or five-year period.

Throughout the years, it’s interesting to read of the ships coming and going from the Port of Georgetown. In recent years, a portion of the harbor side of the 700 block of Front Street was destroyed by fire on Sept. 25, 2013. Among earlier fires, one in 1841 destroyed much of the 600 block of Front Street. The old Town Market was pulled down to create a fire break. The new brick market and Town Clock building were erected in 1842, with the tower added about 1845.

On Feb. 11, 1914, a story headlined “Seaside resort to be developed” told about plans to build homes on the then-isolated Pawleys Island. A few months later, on August 26, 1914 Hugh Oliver listed for sale 28 lots on Pawleys Island. They were 50 feet wide and ran from the ocean to the salt marshes, for only $200 each.

A two-story hospital was built in Georgetown in 1906, but only lasted for five years.

On January 30, 1930 a headline read, “Colored hospital dedicated.” This was the forerunner of what is today Smith Medical Clinic at Holy Cross Faith Episcopal Church in the Pawleys Island area.

Over the years, too, the Georgetown Times carried stories about pirates attacking the North Island Light around 1865, the jetties developed at the entrance to Winyah Bay, and bridges built and put into service in several places to improve transportation.

Other stories related industries large and small and so much more.

One of my all-time favorite comments about our hometown newspaper came from Santa Claus.

The Oatland / Dunbar / Browns Ferry communities have a New Year’s parade each year. On December 31, 2005, my late wife Ruthann went along with me as I headed out to cover the parade. We found a spot across Browns Ferry Road (S.C. Highway 51) near the church that would host parade-goers and participants for a meal after the parade.

We were just two of maybe a half-dozen white folks who were at the end of the parade route. We sort of stood out in the crowd of perhaps a couple hundred people.

Silas “Bumsy” Cohens was wearing his Santa Claus suit and was astride his bicycle after riding the parade route with others.

He politely asked who I was and what brought me out that day.

I told him I was with the Georgetown Times and was covering the parade for the paper.

You may also download a PDF file of that 60-page issue on the newspaper’s Web site, with this story.

The library has many collections on its Web site, including two newspaper collections, for both the 19th Century and the 20th Century.

Tommy Howard is a Georgetown native and retired editor of the Georgetown Times, Waccamaw Times, Inlet Outlook and County Chronicle newspapers. He is currently a freelance journalist for the papers.