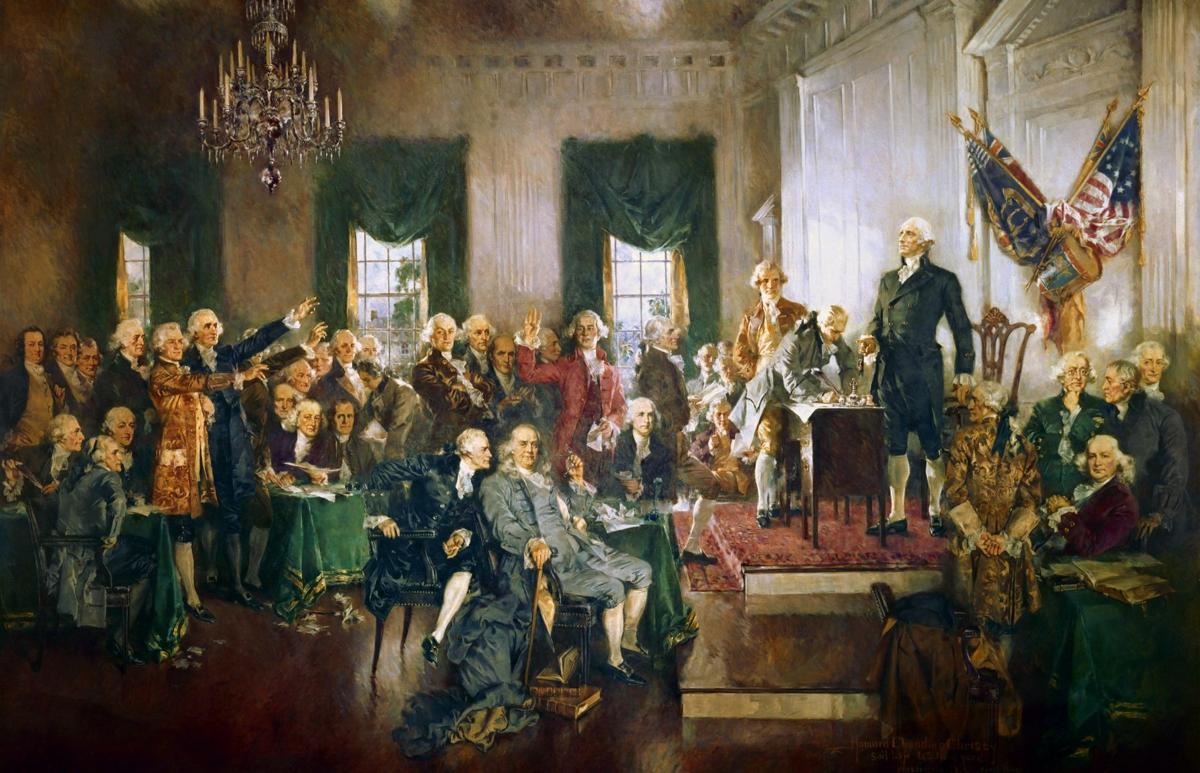 Signing of the United States Constitution with George Washington, Benjamin Franklin, and Alexander Hamilton (left to right in the foreground). This large painting (20 ft . high, 30 ft . wide) is in the U.S. Capitol. 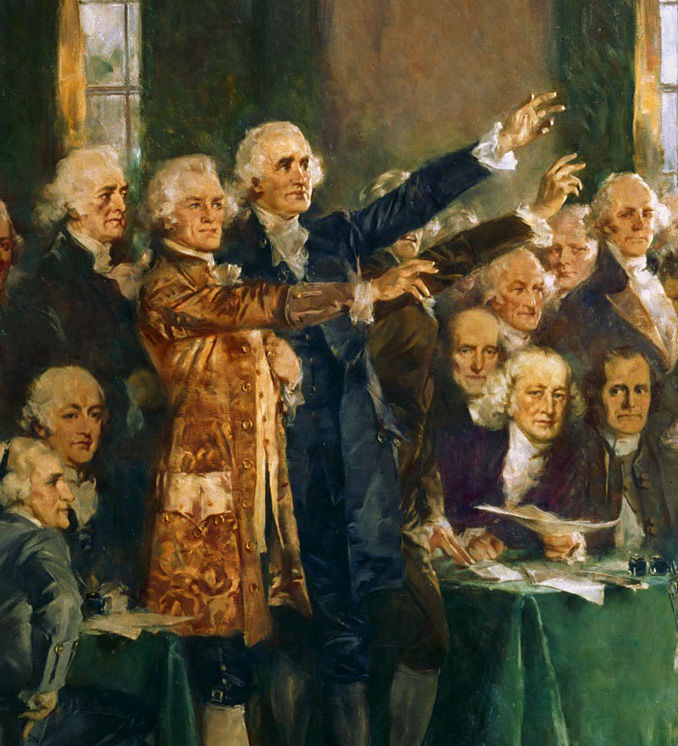 South Carolina’s signers of the Constitution are, from left, John Rutledge,Charles Pinckney (arm straight), Charles Cotesworth Pinckney (arm elevated) and Pierce Butler (face blocked by arm). This is from a large painting that hangs in the U.S. Capitol. 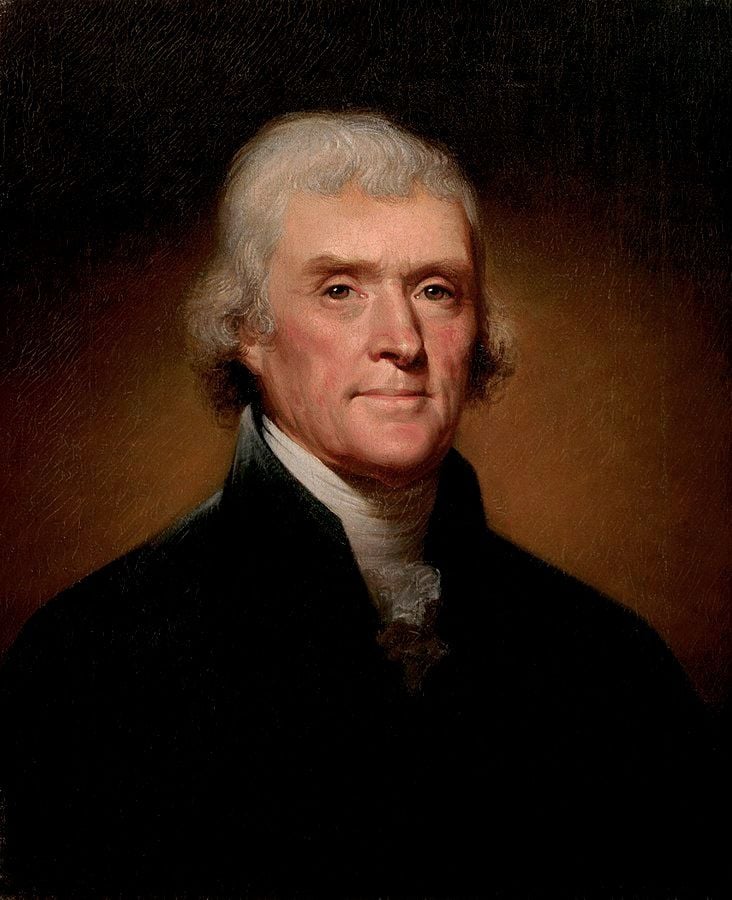 Signing of the United States Constitution with George Washington, Benjamin Franklin, and Alexander Hamilton (left to right in the foreground). This large painting (20 ft . high, 30 ft . wide) is in the U.S. Capitol.

South Carolina’s signers of the Constitution are, from left, John Rutledge,Charles Pinckney (arm straight), Charles Cotesworth Pinckney (arm elevated) and Pierce Butler (face blocked by arm). This is from a large painting that hangs in the U.S. Capitol.

“I wish the media would just go away …”

There’s way too much slanted news on a national level today. President Donald Trump calls the “Washington Press Corps” fake news. For its part, many people say that much of the national media has an agenda and slants news stories.

Chances are, there’s lots of truth in what critics of the President and critics of “the media” say … but freedom of the press is a core element of democracy.

On June 21, 1788 New Hampshire ratified the Constitution that made us the United States of America. It was the ninth of the 12 states that participated in the Constitutional Convention that proposed a new document to replace the Articles of Confederation. (South Carolina was the eighth state; Rhode Island didn’t participate in the convention.)

Among the reasons that Rhode Island and several other states took longer to approve the Constitution was their concern that certain rights were not enumerated in the founding document.

Congress approved 12 proposed amendments to the states. Of those, ten were ratified on December 15, 1791 and became known as the “Bill of Rights.”

Congress shall make no law respecting an establishment of religion, or prohibiting the free exercise thereof; or abridging the freedom of speech, or of the press; or the right of the people peaceably to assemble, and to petition the Government for a redress of grievances.

To those who say they’re bothered by “the media” and its reporting, consider what you’re saying if you promote doing away with the media: That’s not just the TV networks and cable news operations. The media includes radio, newspapers, magazines, Internet news operators and others who use social media as an outlet.

Also, it would seem that if “the media” was done away with, freedom of speech, religion and assembly would also be done away with since all those precious rights are placed together in the First Amendment.

You may read the full text of the Bill of Rights at this link:

Thomas Jefferson was the primary author of the Declaration of Independence. He served America in many ways. He was minister to France, Secretary of State, Vice President and President. If you look him up on Wikipedia you’ll see that he was a well-rounded, bright man who knew all sorts of things.

When President John F. Kennedy spoke at a dinner honoring Nobel Prize winners in April 1962, he said to the group:

“I think this is the most extraordinary collection of talent, of human knowledge, that has ever been gathered together at the White House, with the possible exception of when Thomas Jefferson dined alone. Someone once said that Thomas Jefferson was a gentleman of 32 who could calculate an eclipse, survey an estate, tie an artery, plan an edifice, try a cause, break a horse, and dance the minuet.”

He knew English, French, German, Italian, Greek and Old English. He studied the Koran, compiled a Bible and doubled the size of the United States with the Louisiana Purchase. He ordered the Lewis and Clark Expedition which led to many discoveries about the new lands. His personal library of 6,487 volumes was the largest collection in the country. After the British burned Washington, D.C. in 1814, he sold his collection to reestablish the Library of Congress. Jefferson designed and founded the University of Virginia.

This man of great intellect was a staunch defender of freedom of the press, free speech and learning in general.

“Our liberty cannot be guarded but by the freedom of the press, nor that be limited without danger of losing it.” --Thomas Jefferson to John Jay, 1786.

“The basis of our governments being the opinion of the people, the very first object should be to keep that right; and were it left to me to decide whether we should have a government without newspapers or newspapers without a government, I should not hesitate a moment to prefer the latter. (Emphasis added.) But I should mean that every man should receive those papers and be capable of reading them.” --Thomas Jefferson to Edward Carrington, 1787. ME 6:57

“The agitation it produces must be submitted to.”

One of Jefferson’s correspondents was the Marquis de Lafayette, a young Frenchman who landed on North Island near Georgetown, S.C. on June 13, 1777 when he first offered his sword in America’s fight for freedom.

“The only security of all is in a free press. The force of public opinion cannot be resisted when permitted freely to be expressed. The agitation it produces must be submitted to. (Emphasis added.) It is necessary, to keep the waters pure.” --Thomas Jefferson to Lafayette, 1823. ME 15:491

John Adams was the second President of the United States, and Jefferson was his Vice President. During Adams’ single term (1797-1801), he and his Federalist Party came under intense criticism. Adams signed the Alien and Sedition Acts, a series of four laws that were used to suppress dissent. According to Wikipedia, “The Sedition Act resulted in the prosecution and conviction of many Jeffersonian newspaper owners who disagreed with the government.” Several were fined hundreds of dollars and sentenced to as much as 18 months in jail.

Jefferson and James Madison helped write Kentucky and Virginia resolutions asserting state’s rights. The controversies surrounding the acts helped Jefferson and his Democrat-Republican party defeat Adams and the Federalists in the Presidential election in 1800.

Many local news outlets have quite capable journalists who devote much time and energy in pursuit of the truth. They cover city and county government, the school system, parades and fund-raisers, organizations that help the community, Scouts and sports and civic groups.

The Georgetown Times has been serving the community through its predecessor newspapers since May 8, 1798. That’s 222 years. It’s the oldest newspaper still being published in South Carolina.

Since 1975, the Georgetown Times has been owned by Evening Post Industries. The Post and Courier of Charleston is the oldest daily newspaper in South Carolina, dating back to 1803.

Do their journalists sometimes make mistakes? Certainly. But when they do, they correct them.

Will you always like – or agree with – what a reporter writes? Probably not. But as Jefferson said more than two centuries ago, newspapers are important to society.

When you read, hear or see a news story, remember that you are being informed about your community. Criticize if you must when you see a mistake, but don’t lump all the many dedicated, honest journalist into the same category with those who are not practicing good journalism.

And, thanks for reading.