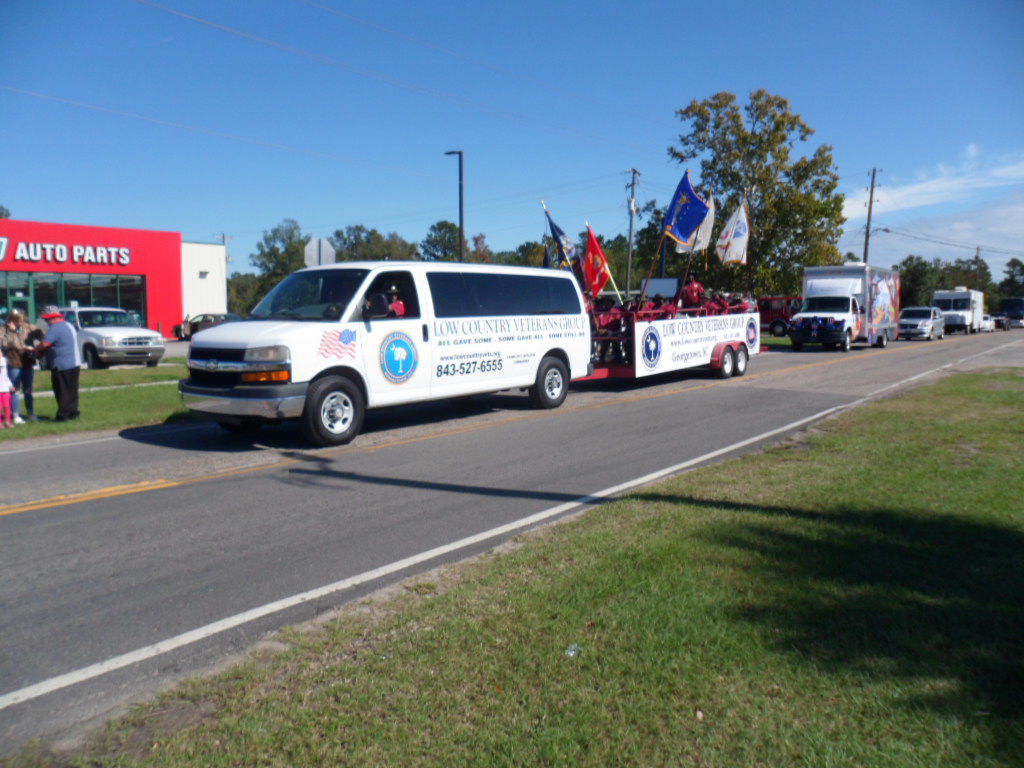 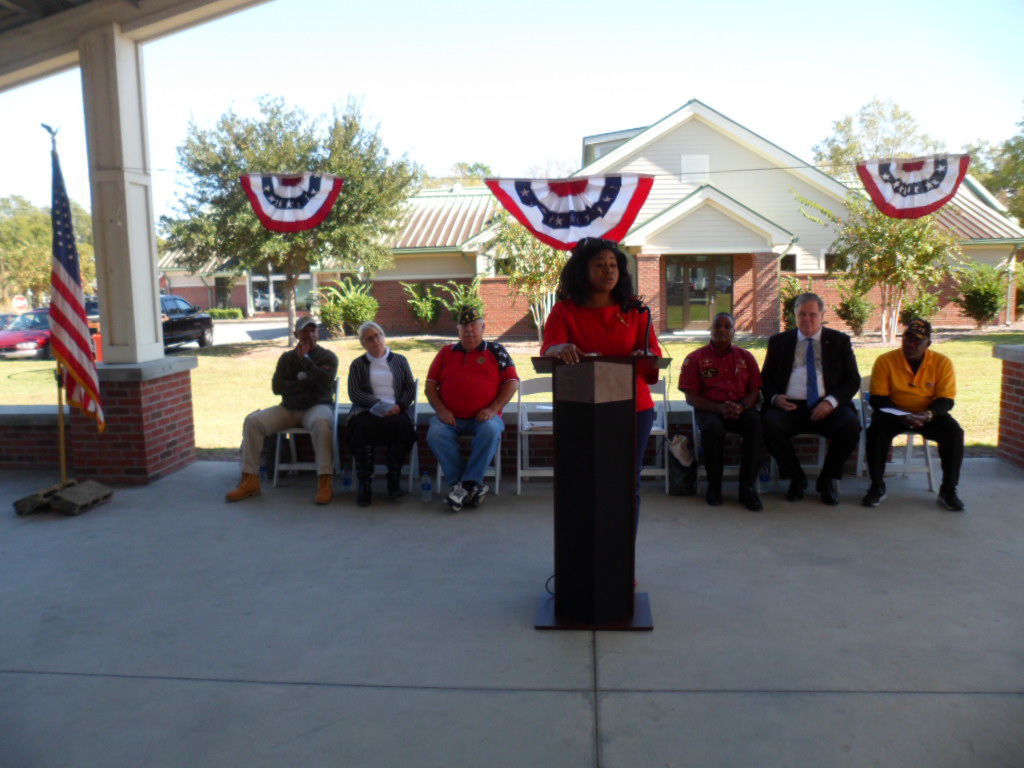 Danisha McClary, grand marshall of the parade, speaks at the ceremony.

Danisha McClary, grand marshall of the parade, speaks at the ceremony.

The Andrews Veteran’s Association, the American Legion, the Low Country Veterans Group, among others, marched down Main Street in the 12th annual Andrews Veterans Day Parade on Saturday, November 2.

Music was provided by the Andrews High School Band and Choir.

Immediately following the parade, a Veterans Day Service was held at the Library Pavilion.

Thomas Alford, Chairman, Andrews Veterans Association, said, “This is a great day in Andrews today. For 12 years we’ve been doing this, remembering that previously nothing had been done for veterans in Andrews. Let’s give ourselves a round of applause.”

Andrews 12th Annual Veterans Day Master of Ceremony, John Yancey McGill, the former Lt. Gov. State of South Carolina, said Andrews has one of the largest ceremonies across the state and “you should be proud of that.”

Alford pointed out that Senator McGill jumped on board with us from day one, “in fact, he gave us the first check, of $1,500 to start this thing with. And every year since he has given us money to keep going. He is a part of this organization from the top to the bottom. And we’d like you to give him a round of applause to him.”

McGill thanked Alford and asked everyone to stand for the posting of the colors by Andrews High School (NJROTC), the Pledge of Allegiance, the National Anthem and the Rifle Drill Team.

The town of Andrews mayor, Frank McClary, thanked McGill for continuing to look out for the town. He added how blessed the town was with the work of others at the state, such as Senator Sabb, who recently presented the town with a check for $150,000

for the remodeling of the administrative building.

“I spent 29 years in this business and I get passionate about a couple of things, and definitely about being a soldier and watching the interaction with our veterans,” McClary said. “I want to thank you all, men and women, across all our services, for what you do and continue to do for our folks here and abroad.”

“We have many brothers and sisters that served in the military who are not hear today because they are detained elsewhere,

Jayroe said. “They are known as MIA and POWs.”

He explained Resolution 288, adopted in the 67th National Division, calls for designating a POW MIA empty chair at all official meetings of the American Legion.

“And so, we designate this empty chair as a physical symbol of the thousands of American POWs and MIAs still unaccounted for from World War II, the Korean War, the Vietnam War and many other conflicts,” he said.

According to Jayroe, the table itself is small, symbolizing the frailty of one prisoner, alone against his or her suppressors. The table cloth is white, symbolic of the purity of their intentions to respond to their country’s call to arms. And the single red rose in the vase signifies the blood they may have shed in sacrifice to ensure the freedom of our beloved United States of America.

“This rose also reminds us of the family and friends of our missing comrades who keep the faith, while awaiting their return,” he said. “The yellow ribbon on the vase represents the yellow ribbons worn on the lapels of the thousands who demand, with unyielding determination, a proper accounting of our comrades who are not among us tonight. A slice of lemon on the plate reminds us of their bitter fate and the salt sprinkled on the plate reminds us of the countless fallen tears of families as they wait. The glass is inverted as they cannot toast with us this night. The chair, which is missing, is empty, as they are not here.”

Jayroe further explained how the candle is reminiscent of the light of hope which lives in our hearts to illuminate their way home, away from their captors, to the open arms of a grateful nation. He asked everyone to pray to the supreme commander that all of our comrades will soon be back within our ranks. “Let us remember and never forget their sacrifices,” he said.

“At this time, we are in for a treat,” McGill said, “as we have a lady to speak with us today, Danisha McClary, Esquire

Major McClary, US Army Retired, it runs in that family. She is a native of Donalsonville, Georgia and is currently the First Lady of Andrews, SC, where she resides with her husband, Mayor Frank McClary.”

McGill pointed out while in the Army, she served as an officer in the US Army Finance Corps and served as the Deputy for the Defense Military Pay Office before being selected as an Army Funded Legal Education Program Officer. She was detailed as an attorney in the Army Judge Advocate Generals (JAG) Corps.

Her awards include the Bronze Star, Meritorious Service Medal and the Army Accommodation Medal.

“I am a bit nervous because believe it or not this is a lot different than standing up in a courtroom,” McClary said. “First I want to thank God for his grace and mercy and thank you all for coming out today because your presence honors veterans, old and young, past and present.”

“One thing I can tell you is true that at some point in his or her career veterans have been called upon to make sacrifices,” and when I think about those sacrifices I think about the immortal words that can be attributable to Korean War veteran and purple heart recipient William Osterkamp who said All Gave Some and Some Gave All,” she said.

McClary said she was honored to have been selected to be today’s speaker and very humbled. “Not only because my fellow veterans thought enough of me to want me to be here today but it’s also been impressed upon me that this is history for the town of Andrews because I am the first female to be asked to be the speaker for the Veteran’s Day program.”

“I would be remiss if I did not take this opportunity as the speaker to recognize trail blazing women veterans who broke down barriers, shattered glass ceilings and defeated stereotypes so that women like me could stand on platforms like the one I am standing on today,” she said.

She pointed out the reason she is able to stand here today is “because I stand on the shoulders of women veterans who were willing to serve in the face of adversity.”

She referenced Massachusetts woman Deborah Sampson Gannett who twice disguised herself as a man in order to serve in the Continental Army of the Revolutionary War.

McClary told the audience how she officially enlisted in early 1782 but after someone recognized her she was discharged. Despite the fact that she faced public ridicule, she would not be deterred. Because in May of that same year she re-enlisted under disguise and this time she was able to successfully serve 17 months, serving along men in fighting the war. Her secret was not discovered until she fell victim to a musket wound and when she had to seek medical attention she was discovered and discharged.

McClary also said she stands on the shoulders of Loretta Perfectus Walsh who in 1917 enlisted in the Navy and became the first woman to serve on active duty in a non-nursing capacity.

She explained that before Loretta Perfectus Walsh women were only allowed to serve in the capacity of nurses in the Army nursing corps. “But Loretta Perfectus Walsh changed that when she became the first to serve in a non-nurse capacity and was sworn in as a chief yeomen literally just days after the Navy Department authorized the enrollment of women in positions that typically had only been reserved for men,” she said.

“I also stand on the shoulders of women like Charity Adams Earley who was raised in North Carolina and in 1942 became the first black woman to earn a position in the Women’s Army Auxiliary Corps which was also known as the WACs,” McClary said. “Two years later in 1944, Earley would serve as a company commander for the first company of black female soldiers to serve overseas. She would eventually rise to the rank of lieutenant colonel and become a battalion commander.”

“When reflecting on her service years later, Earley is quoted as saying the experience of African American women at this particular time lays the ground work for change not only for our race but for women in general.”

McClary called attention to how the courage of Deborah Sampson Gannett, Loretta Perfectus Walsh and Charity Adams Earley set precedent that would change the course of American history.

“Because of their sacrifices not only am I able to stand here today a veteran but other women veterans have been able to not only serve but serve with distinction. Women like Anna Mae Hays who in 1970 became the first female to attain general officer rank in the US Army,” she said.

According to McClary not only are branches and jobs that were previously closed to women are now open, but women are guaranteed access to educational opportunities, equal opportunities for promotion, protection for workplace discrimination and harassment and equal pay. And women veterans are still breaking down barriers.

“As a woman veteran I say to all women, do not be afraid to challenge the status quo, go for it and blaze the trail that women after you may follow,” she said. “And whenever possible, take other women with you.”

She also drew attention to how she mostly

focused on the contributions of women, and acknowledged that although “women are fully capable of accomplishing any goals we set for ourselves, we would not have made the progress or had the successes we have had were it not for our fellows in arms. They stand besides us in formation, cover our backs in firefights and show respect for our authority when we are in charge.”

“So regardless of our gender, our race, religion, where we came from, veterans are a family bound by duty, bonded by service and forged to sacrifice,” she said.