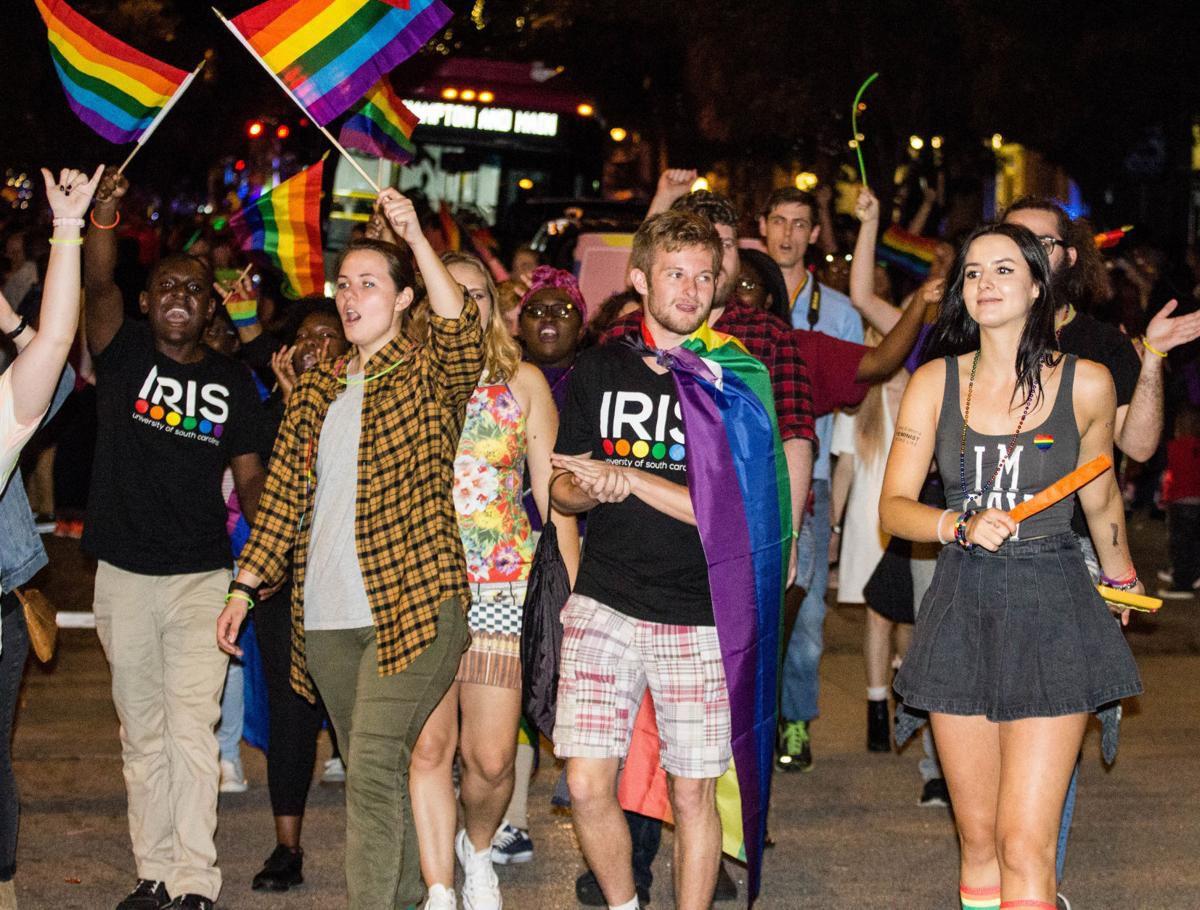 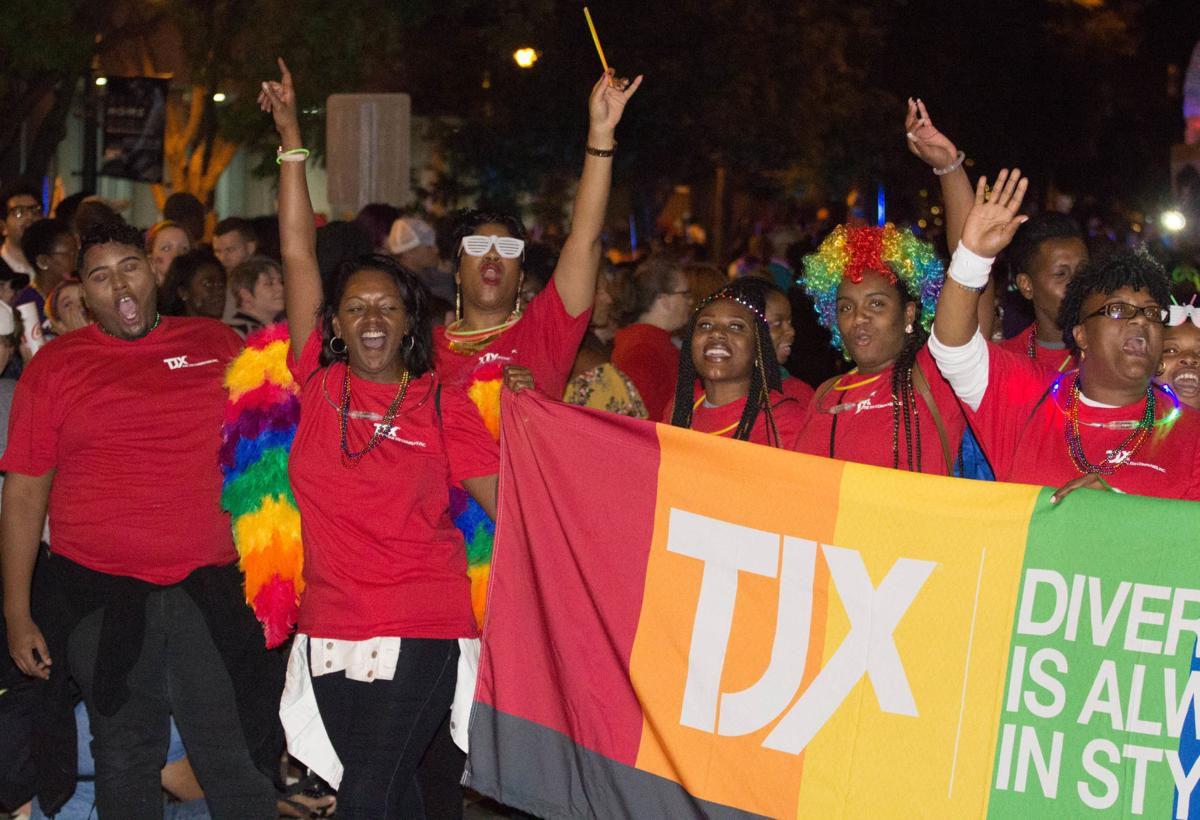 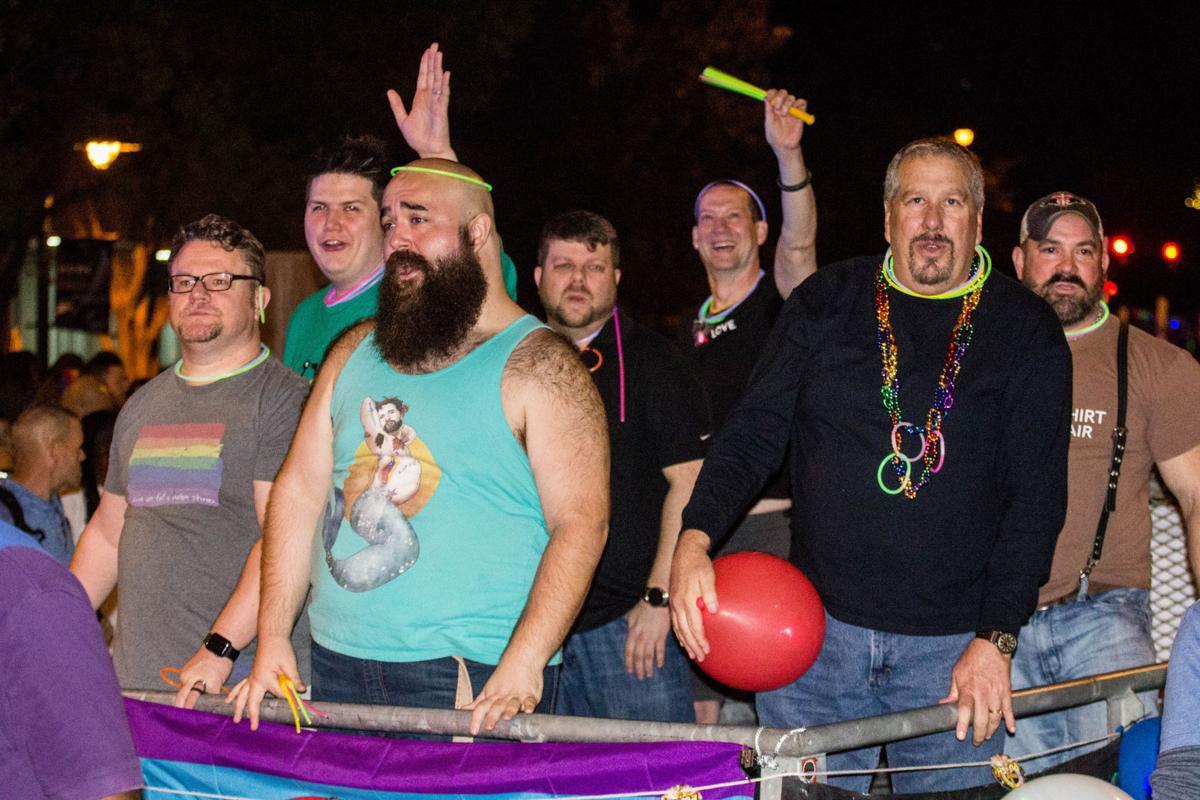 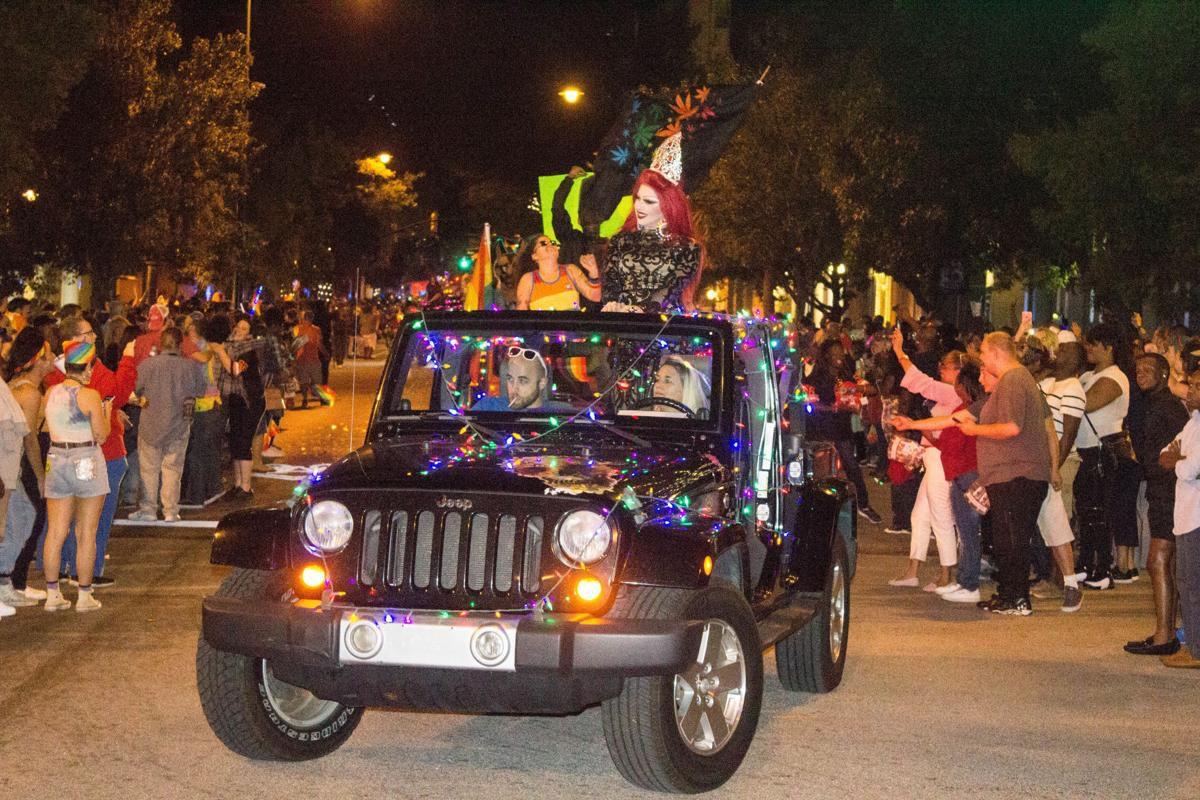 When Dayna Smith first started attending South Carolina Pride events there was no one like her on the stage.

“I was like the only out trans person in Columbia at the time,” she says.

Smith legally changed her name in 2006, but had been transitioning publically for a decade, an uncommon choice at the time. Many transgender people would transition and move away, disavowing themselves of their past, she recalls. But she stayed.

Since 1997, she had been driving to Orangeburg to see the only doctor in the state offering hormone treatment. She drove to Wilmington for therapy and Asheville for a support group.

And at South Carolina Pride, she says, “It’s gone from, 'What are you doing here?,' to now you’re a part of it.”

In 30 years, Pride has shifted from a protest by a group viewed as outsiders seeking equality and acceptance to an annual celebration, 80,000 strong, largely embraced by the city of Columbia and the surrounding area. The weekend-long Pride events start Friday.

A Look at This Week’s Pride Events

But with this progress comes new questions: What challenges remain for Pride to tackle in its Midlands home base? And how does the organization continue to serve the greater LGTBQ community throughout the state?

Going into Pride’s first parade in Columbia in 1990, the marchers didn’t know what to expect. Former SC Pride board member Matt Tischler remembers not how many people would show up, not how the event would be regarded by the community.

Some 1,500 people would arrive that day, and the event would only grow with each subsequent year.

Jeff March was there for the first Pride rally, as marchers traveled down Main Street to the grounds of the South Carolina State House. He didn’t join the crowd or carry one of the iconic pink balloons, though, and he didn’t dash up the Capitol steps.

Not yet fully out at as gay, March watched with a friend perched in the trees, afraid of being caught by a photographer’s camera or that something bad might happen.

“It was a different time back then,” he says.

March would go back the next year, watching the march from a car. In 2012, he became president of Pride, having now held the office longer than any of his predecessors.

March says he sees the city’s support and the struggle it took to gain that acceptance whenever he looks at the rainbow street banners waving from light poles downtown, trumpeting Famously Hot South Carolina Pride, the name the organization’s annual festival and surrounding week of events adopted in 2016, co-branding with Famously Hot New Year, the City of Columbia’s beloved year-end concert. Though a seemingly small gesture, the banners had a strong impact on Hunter Harley, secretary of Pride, when he was younger and didn’t have the support of his family.

“While maybe I didn’t fully understand the meaning then, it let me know there was a community I could go to,” he tells Free Times. “Seeing an accepting city can be a big thing.”

Smith was sitting at a table outside the former Gotham Bagel on Main Street and just happened to look up at the banners the first year they were hung.

The social media post she made still pops up as a memory on her Facebook page: “A Latin festival and Pride banners on Main Street, am I in Columbia anymore?”

“It’s just how far we’ve come over the years,” March says of what instances like this impress upon him. “People don’t expect it to be like it is here. We’re a liberal city in a not-so-liberal state. That’s probably why we’re so embraced.”

The couple noticed the biggest difference after same-sex marriage was legalized at the national level in 2015.

Prior to that, there were very few spectators of the parade. But that year people were on the sidewalks cheering.

“It was clear we were being applauded for that accomplishment,” Madden says.

“And they were surprised maybe by the fun they had,” Easter adds, or at least that’s the feedback the organizers heard. “Who doesn’t want to join the party?”

Receiving hospitality tax dollars for the parade was another benchmark. Madden and Easter say they felt like they had institutional support, something that was hard to find in the early days organizing the march.

“It shows the state we are valuable, we are a player in this game and we’re here to make a difference for the state and city,” offers Darius Jones, president of South Carolina Black Pride.

As does the hate crimes ordinance recently passed by the City of Columbia.

“It goes beyond tolerance to acceptance and shows the unity of one great city,” Jones says.

One of Matt Butler’s favorite pictures is from Pride. Butler, operations director at the Harriet Hancock Center, wore a big floppy purple hat and “fabulous” sunglasses as he walked in 2012 alongside friends who were organizers of Famously Hot New Year in the parade.

“There may or may not have been mimosas beforehand,” he says, and his little corgi, Dolly Elizabeth Parton von Munchhausen de Louise (“I just call her Dolly”), was tucked at his side.

“I try to bring her to as many Prides as I can,” Butler adds

Protestors shouted from the sidewalk as the group walked past.

“They were vocal and nasty and mean,” Butler says, but that would change over the years.

“They became silent standing there with their posters and then they just started to dwindle and dwindle away,” he recalls. “It makes me feel good. It gives me hope that even outside our little bubble here in Columbia, things are changing.”

Madden says he thinks Columbia’s acceptance and understanding has allowed Pride to become something very different than what it was at the beginning.

“For a long time, we’ve thought of Columbia as a little bit of an oasis,” Madden says. “In a way, it becomes easy to feel comfortable. Yet at the same time, we know there are still people who are deeply closeted.”

“While I do love the celebration of SC Pride, I miss that feisty, angry, ‘We want to change things’ sense,” Madden adds, looking back on a time when the event was more of a political march.

The protest served a purpose, a purpose and a need that isn’t completely gone, Madden contends. LGBTQ people can still get fired because of their orientation, he gives as an example.

And Tischler says transgender people enjoy less progress than the rest of the LGBTQ community at large, especially as four black transgender women have been killed in the state since 2018.

“If I said every different spectrum of LGBTQ is embraced by the community, I’d be lying,” Jones admits.

“Gay, white, male voices have always dominated the conversation and they still do,” Madden says. “It’s important to be aware of that.”

In the 30 years since SC Pride started, more organizations have formed around the state, each with their own focus, allowing opportunities for more issues to be tackled and for more people to participate.

In an attempt to reach the transgender community outside Columbia and other major metro areas, SC Equality, an organization which has taken on more of the political role of Pride, will hold town hall meetings in 19 rural towns, says Jeff Ayers, the group’s executive director.

For it’s part, Pride tries to make each year’s programming more inclusive than the last. It’s bringing Drag Story Time to Columbia for the first time, holding it as part of the Family Pride festivities during the centerpiece Famously Hot street festival on Saturday, and a Trans* Takeover will precede the Official Kick-Off Party at PT’s 1109 on Thursday.

“Pride has definitely raised the visibility of the trans community,” Smith says, pointing to the fact that the parade has had two transgender grand marshals in the last five years.

What else do LGBTQ leaders hope to accomplish? In terms of community action, Smith sees a need for a trans-centric homeless facility that is either all transgender or where gender identity is recognized.

Pride’s next big initiative will be a club for youth called Pride Camp, March says. The full details have not been ironed out, but the effort is meant to fill voids left by a smaller number of gay-straight alliances in schools.

“They’ll fill out all the necessary paperwork and go through all the steps and the principal will shut it down,” Ayers says of these groups, particularly in the Upstate, that have been dissolving with greater frequency in the past four years.

Jones thinks an expansion of the Harriet Hancock center, with satellite offices in other cities, would be a good next step in reaching the state as a whole.

And all would like to make inroads into Greenville, the only metro area in South Carolina with no major Pride organization.

[Update: Upstate Pride SC, which was founded in 2008, and will bookend its upcoming Upstate Pride Week events with an Opening Day Mini-Fest on Oct. 27 in Greenville and the 11th annual Upstate Pride March and Festival on Nov. 2 in Spartanburg, disputes the notion that there is no major Pride organization operating in Greenville.]

Despite SC Pride’s entrenchment in the Capital City, its reach still extends into other areas of the state.

“One Pride festival in Columbia does more in bringing people together than I can do at the State House,” Ayers posits.

Of those who signed up to receive information on SC Equality during Pride last year, half were from outside the Columbia area. And the number of straight allies is up drastically in the last five years, too, he says.

A recent initiative to reach out to straight allies is the Brave the Rainbow campaign, inspired by a similar program March saw in New York during the World Pride festival in June. The program provides free rainbow stickers for local businesses to display in their windows, signifying solidarity with the LGBTQ community.

March says there are already about 150 businesses participating in Columbia, and another 50 in the Upstate.

“And they’ll be coming to Charleston very soon,” he says.

March said the campaign started with Pride asking a handful of businesses to display the window clings. The subsequent high in Columbia and elsewhere speaks to the fact that, while there’s still much work to be done, acceptance of the LGBTQ community in South Carolina is on the rise.

“Suddenly, everybody came to us,” he offers. “That part has been eye-opening."