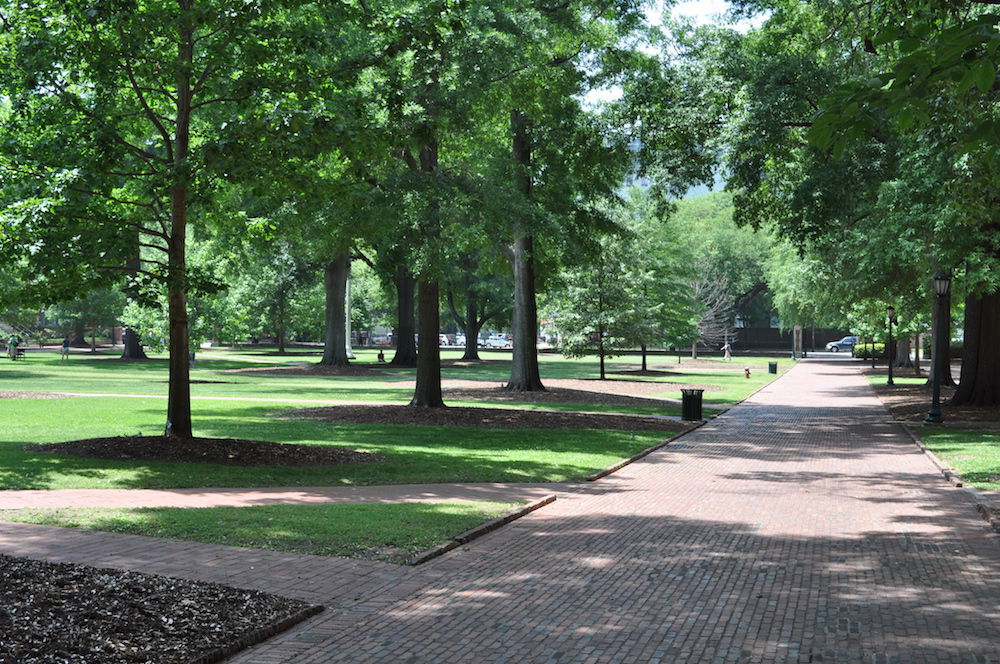 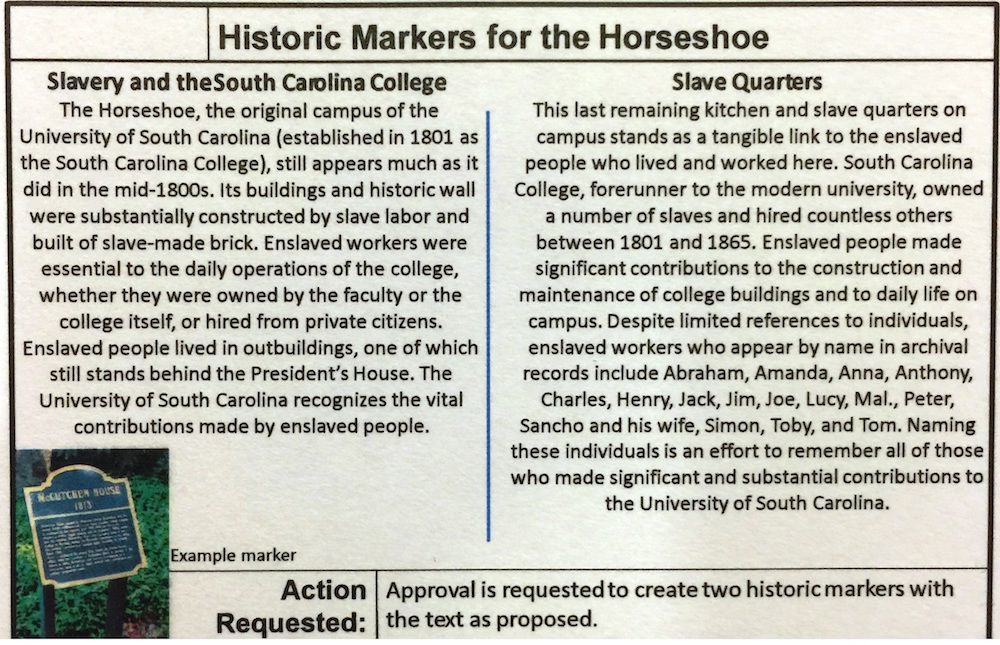 Wording on two markers at USC.

The University of South Carolina will erect two markers that acknowledge the role slaves played in building the historic 216-year-old campus.

The markers join a garden next to USC’s administration building honoring the school’s desegregation in 1963 and a planned statue of Richard T. Greener, the university’s first African-American professor, as recent moves to better acknowledge black history at South Carolina’s flagship college.

Some of USC’s moves to recognize African-American history on campus came following demands from a 2015 student protest that included the acknowledgement of the use of slave labor to build the college.

One marker on the Horseshoe will recognize that slaves constructed buildings on the college’s iconic part of campus. A second marker will honor the last remaining slave quarters on campus, a small building in a courtyard behind the president’s house.

“Enslaved people made significant contributions to the construction and maintenance of college buildings and to the daily life on campus,” reads one marker that lists names of several slaves at the college.

When the markers will be erected has not been decided, Hickman said. No cost estimate was available.

The statue for Greener — who served as both professor and librarian during the late Reconstruction Era of 1873-1877 — will be erected over the next over the next 18 months.

“I think USC is recognizing a largely overlooked, critical chapter in the institution’s history,” said USC history professor Bobby Donaldson. “But it’s also an indication of much more work to be done to render a complete and critical history of the institution, and the role African-Americans played in its development and its maintenance for generations.”

In other business last week, the USC Board of Trustees:

• Granted final funding for redevelopment of the law school building on Assembly Street to serve as a science and technology center. The $47 million project will be paid for through $44 million in bonds and $3.5 million in cash reserves. USC is counting on a $25 million bond, now before the S.C. General Assembly, to defray the cost of the project.

The project will radically transform the building, creating 17 chemistry labs, four classrooms and support spaces in the building. Also the lobby will be renovated and flooded with natural light, which will provide for more study spaces.

Plans call for construction to begin in January, with occupancy to follow by the 2019 fall semester. The law school moves to its new $80 million building on Gervais Streets next fall.

• Approved purchase of property at 1800 Gervais St. for $839,704. The building is currently leased from the state by the College of Arts and Sciences for psychology faculty and the USC Center for Mind and Brain, which conducts grant-funded research.

• Approved purchase of 14.83 acres of land off Assembly Street across from Capital City Stadium from SCANA for $9.3 million. The site will be used for facilities operations and maintenance staff, as well as shops and storage, service vehicle fleet parking and university recycling. The site also will be developed over the next few years to create student recreation fields.

• The Student Health Center remains on track for completion by July 31.  Roofing is completed, and the exterior terra cotta and glass systems are nearly finished. Ceilings, cabinetry and interior windows are all in the process of installation.