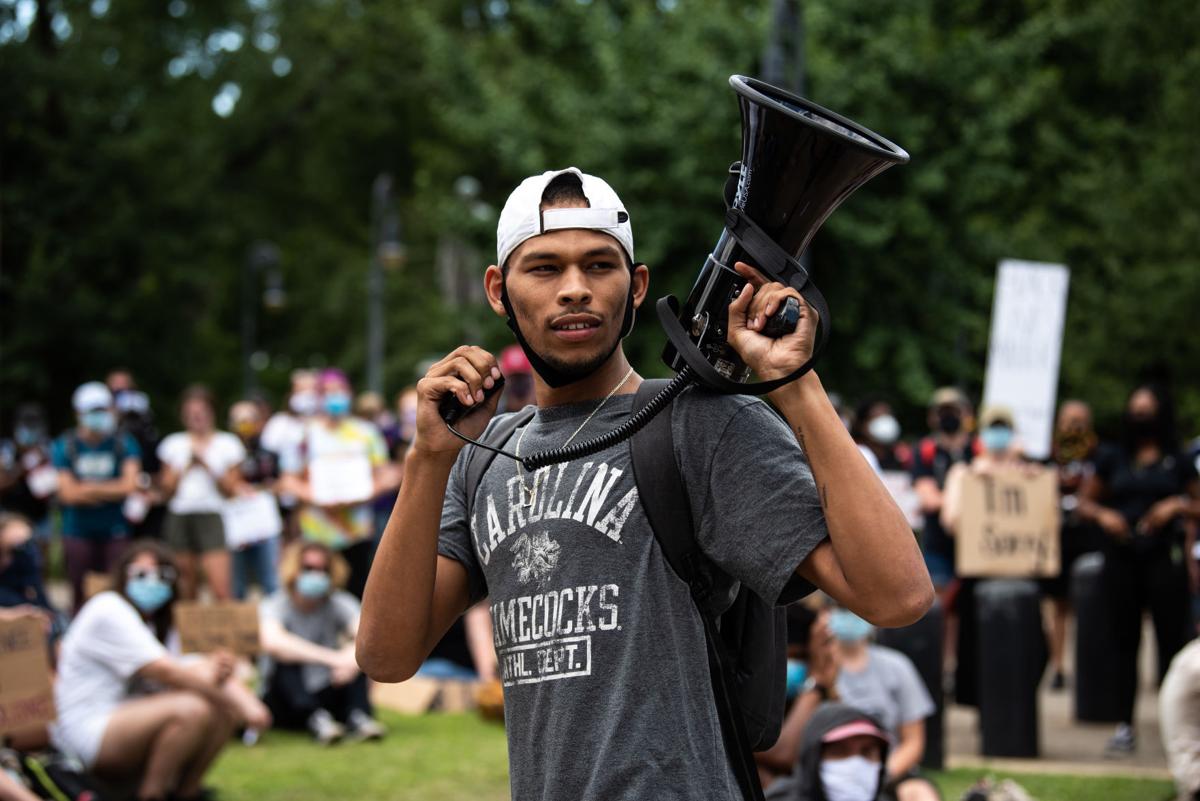 Lawrence Nathaniel calls out instructions to demonstrators at the Statehouse on June 1. 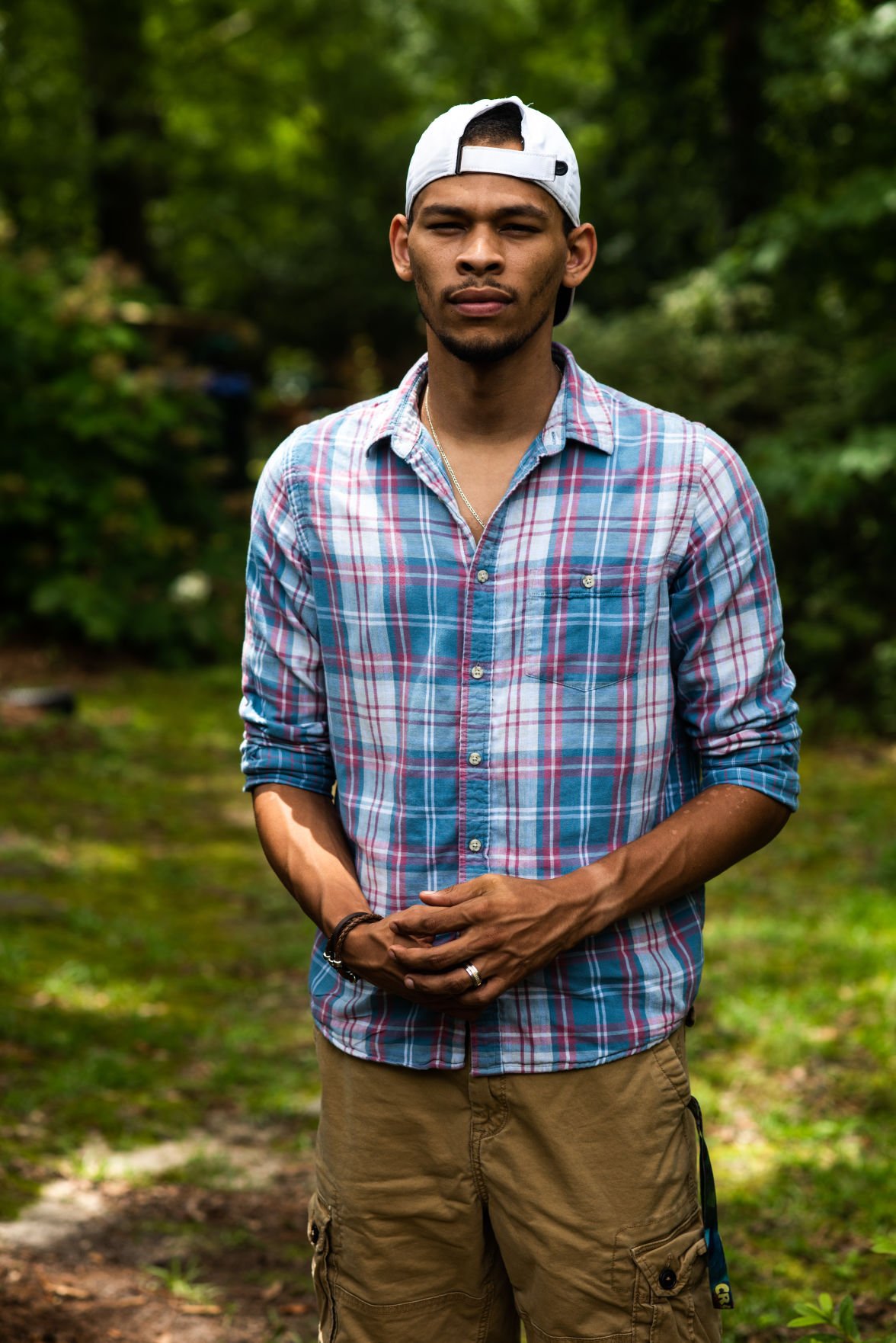 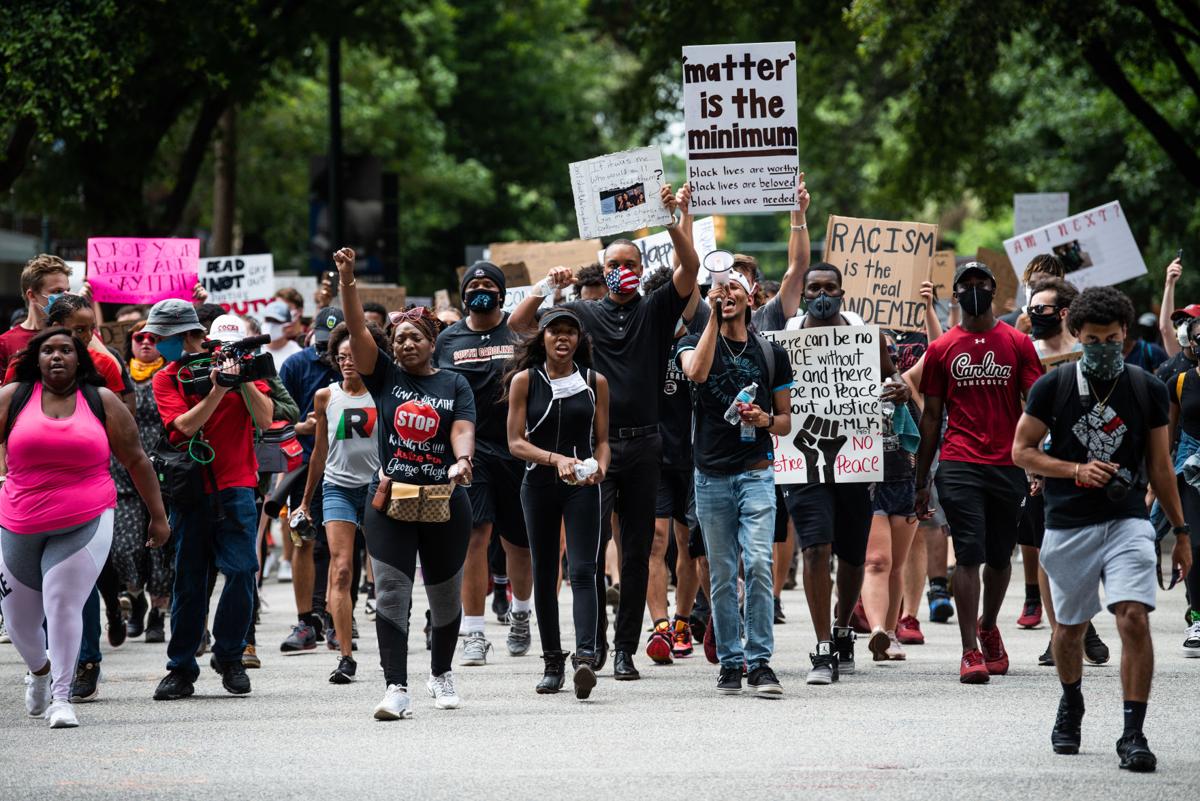 Lawrence Nathaniel marches with protestors from the Governor’s Mansion to the Statehouse on June 5.

As Free Times went to press Monday, protests in Columbia had been going for nine days, taking aim at police brutality and systemic racism in response to the death of George Floyd after a Minneapolis police officer kneeled on his neck for nearly nine minutes.

Locally, Lawrence Nathaniel has emerged as the public face of the movement.

The lead organizer and founder of I Can’t Breathe South Carolina is 26, speaks softly and passionately about the momentum he’s helped spearhead in Columbia. He apologizes for his “Bamberg, South Carolina, country accent” and for speaking for too long in response to questions. As he talks with Free Times on June 6, Nathaniel is interrupted several times by calls from other organizers, and one call he says is from the Legislative Black Caucus.

Over pink lemonade poured by Nathaniel’s great grandmother and noted progressive activist Eunice ‘Tootsie’ Holland, Nathaniel discusses demonstrator’s demands, the current social and political moment, his faith in democracy and his role as a leader. He details that he and other organizers are planning a demonstration to shut down major interstates into Columbia, offering that it is an effective means of making people pay attention to the times and their demands.

Nathaniel also began by talking about the meeting he’d just finished with other organizers, discussing Columbia Police body cam footage, released on June 5, of an officer pressing his knee into the neck of a black protester to restrain him.

The interview has been edited for length and clarity.

Free Times: How did that meeting go?

We did get a call from the mayor, who went down to the police department himself and released the footage last night. So we got the chance to look at it.

It was disheartening, but the mayor is holding the city police department accountable so we should see some action in a few days.

What was your reaction to the video?

All officers should be held accountable.

Further Consideration: There's a better way to be white

You tweeted a couple days back, “I’m not in this fight to be tiptoeing around. ... I’m in this fight to actually make change.” You delivered some demands at the governor’s mansion yesterday. What change do you want to see?

I want to see change in my community. I live on the North Main side, which is a food desert, which is also dealing with gentrification issues, police brutality issues, opioid issues, so forth and so on. The closest hospital is still too far away for a lot of people to get to.

But some of the demands: That is body cams and holding police accountable. Let’s see. Better communication skills with the police department with different people from the community. We want to be able to walk up to the officer and say, ‘Hey, I need your help.’ Without being scared that we’re going to get arrested, shot, tagged, followed or turned into another statistic.

Do you feel that you’re being heard by political leaders?

I am. For Todd Rutherford, the most powerful person in the state House at this moment, the Democratic leader, to accept our demands and to meet us at the Statehouse when the governor wouldn’t, shows that our house leaders are listening to us, but we want to take it a step further. We want to actually present it on the floor of the house, and we want them to set up a people’s committee where these demands are overseen, and they are actually addressed for the next session or this session.

Away from politicians, do you feel the messages are being heard by local residents?

Yes. We’ve awoken something, awoken activists that have been asleep for a long time.

Do you feel your demands actually achieve that goal of breaking down the police?

It’s a start. You want to really break down the police? You tear down the whole entire structure and reorganize. That’s what you do. And I think that’s what we actually need. We need a reorganization of our police departments. And that means from the ground up, and that means new skills, new tech. More investing into our communities.

When you think about back to 2014, 2015, 2016, with Michael Brown, Walter Scott, Philando Castile, does this moment feel different?

In this moment here, everybody’s a lot angrier, because, as you just mentioned, all those names, those names we just constantly hear over and over and more names are being added on today.

Did you worry, and do you still worry, that the vandalizing and looting that occurred after the first protest on May 30 would overshadow or hurt what you were pushing for?

It broke me because it was never supposed to happen in the first place, but it really hurt. So I was scared.

But we had to keep pushing because, you know, this is our fight to protect our community.

I know you had urged in interviews for the demonstrations to stay peaceful. Do you ever see vandalism and looting as a legitimate expression of political anger?

It’s depending on who’s doing the looting.

They always picture African Americans as angry people. So they’re going to keep us angry and there’s the only way that our voices are going to get heard — if we stay angry.

With the demonstrations here in Columbia, do you feel responsibility for the good and the bad?

But then you also have to look and think that if I never done this, South Carolina would never have woke up.

What’s the burden like for you taking a lead in this movement, while also continuing to see terrible things happen?

I don’t know how to answer that. At the age of 14, my mother was going to Claflin University in Orangeburg, and we were living in St. Paul apartments. And when I moved there, I was deemed as a target.

One night, it was like nine o’clock, and about 14 police officers surrounded me and held me at gunpoint. And I felt scared. So, the trauma is something that we live with on a daily basis.

You ran for U.S. House this year, pulling out ahead of the primary, and you’ve talked a lot about how you’re working with political leaders right now. Why do you have such faith in the current system to get things done?

I have faith in democracy. Yeah.

COVID-19 is still in the background — or maybe in the foreground — of everything right now. How do you balance this current movement with the reality that it is still out there?

Alright, so, again, Spanish Flu during the first civil rights era. HIV and AIDS pandemic. The SARS outbreak. Ebola. And each of those times, hundreds and thousands of people, millions around the country, still rose up for a reason.

And a lot of us understand that we are at risk. And we know that young people are at risk, but our soldiers go to war to risk their lives for us. So we’re doing that as well. We’re going to war to change policies.