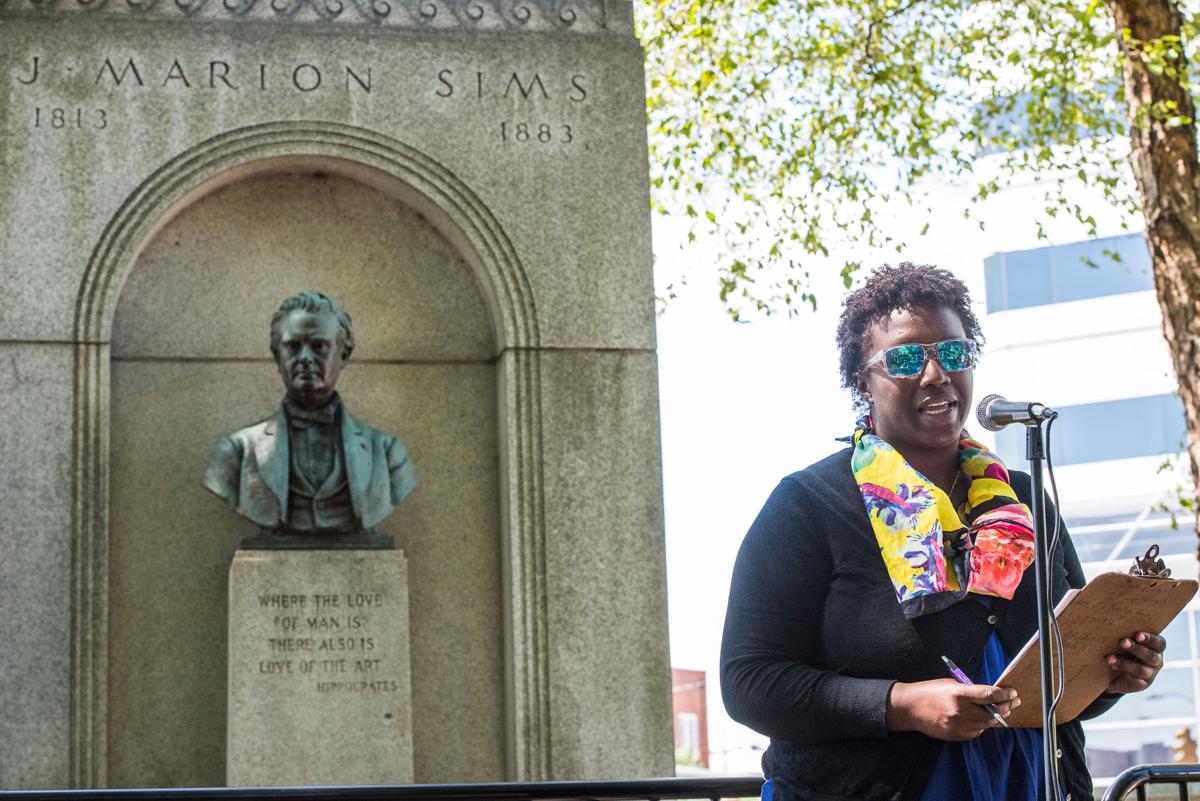 Trez Drake, an MFA student at the University of South Carolina, reads a poem in front of a monument to J. Marion Sims on the grounds of the South Carolina State House. Photo by John Carlos. 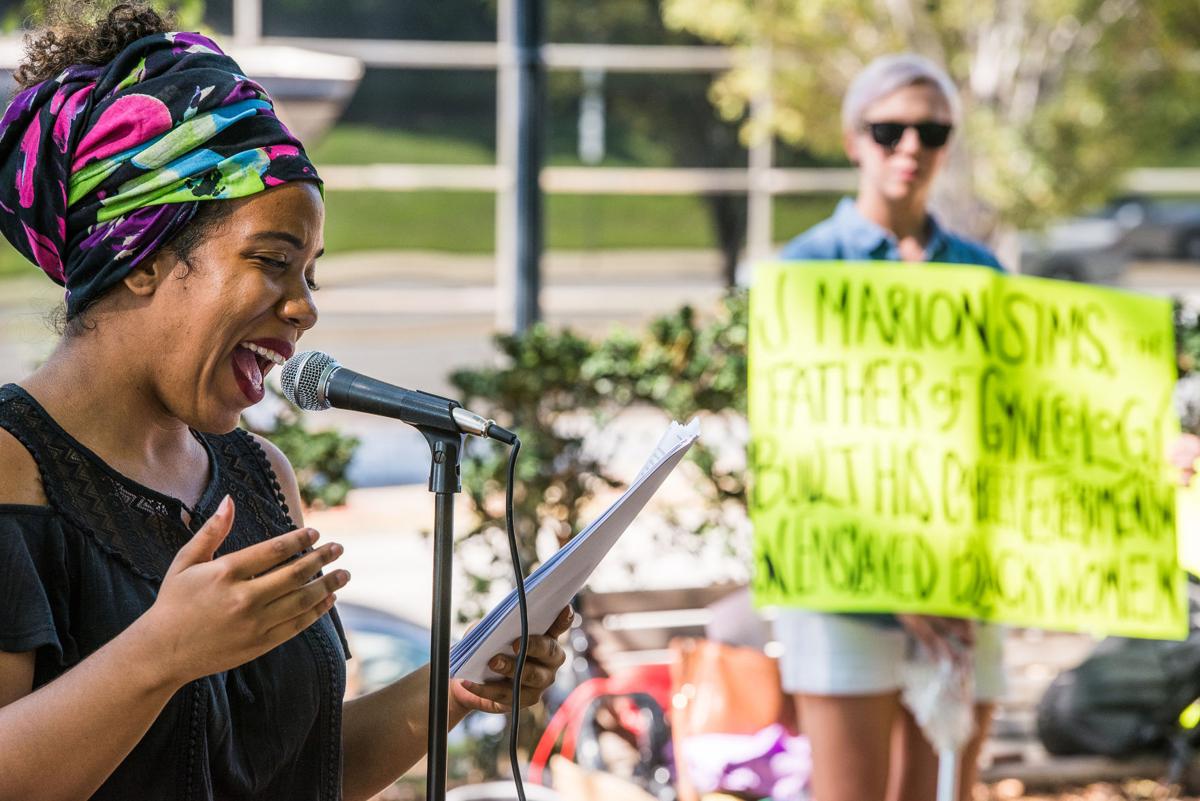 University of South Carolina MFA student Catherine Ntube reads a poem at a protest in front of a bust of J. Marion Sims on the State House grounds. Photo by John Carlos.

Trez Drake stands beside the J. Marion Sims memorial on a shaded corner of the State House grounds and reads:

“i need to know their names

those women i would have walked with

swinging their arms, and the ones

those sweating women whom I would have joined

where in the world are their names?”

She’s reading the poem “the lost women” by Lucille Clifton as part of the MEND poetry marathon. The site of the readings, next to the monument of Sims, is as important to her reading as the words, she says.

Sims, a 19th century figure, is best known as the founder of gynecology. But Sims advanced the science through surgical experiments on enslaved and lower class women using no anesthesia. The marathon of poetry is to make that truth known and to commemorate the women who sacrificed their bodies.

"I think to be 'enraged' is a humane and acceptable response to an American legacy that does not include you, but has used you,” organizers of MEND said in a statement preceding the poetry reading. “However, at this point I have come to see these statues as a common confrontation with a dominant narrative that is flawed and as an opportunity to revise it.”

Joy Priest is one of the event’s organizers.

“We’re trying to mend the narrative,” Priest says. “There’s a dominant narrative in this country that excludes the history of certain voices and the bodies that the legacy is built on.”

MEND draws its title from a collection of poems by the event’s co-organizer, Kwoya Fagin Maples — a collection that focuses on Sims’ patients, enslaved women known as Anarcha, Betsy and Lucy.

The poetry marathon follows the violence in Charlottesville at which white supremacists protested the removal of a Confederate monument, ending with a white supremacist killing one counterprotester. After Charlottesville, Columbia Mayor Steve Benjamin came out against the Sims monument remaining on the State House grounds, calling the statue “wholly offensive.”

With the violence in Charlottesville coming at the removal of a statue, Priest envisioned the poetry reading as a means of creating a dialogue rather than sparking a physical reaction around altering the Sims monument.

“We didn’t want it to become like a protest rally,” Priest says. “I’m not being apologetic for black people who have been enraged and have used their bodies to respond, but for me as a poet I’m using the tool that I have, which is language.”

What Priest and other poets want people to hear is the untold part of Sims’ story. They’re looking to challenge the fatherly myth that surrounds the man and his work by lending their words to the atmosphere that surrounds the grounds where his statue exists.

“Rather than a monument that honors [Sims] as a hero we’d like to start a dialogue that complicates that legacy,” Priest says. “A lot of the tension in the country is that people are calling for removal of the legacy, of the narrative, and it's disrupting the facade of white America. … We’re calling for the revision of the narrative and inclusion of the voices that were silenced through the poems.”

While the mayor may call for removal of the monument, Priest wants to remove the one-sided tale that the bust of Sims tells.

“I don’t think we should remove entirely what happened because then people will forget and that’s not productive,” she says. “But I think the revision of the narrative is essential. Why not add Anarcha and Lucy, the patients of Doctor Sims, to the monument and tell their story, what they experienced and how they sacrificed their bodies to torture to give all women today preventative medicine? Why can’t they be honored with a statue?”

Poetry can play a part in political decisionmaking, she says.

“Pressure is important. You have lobbyists that come in and do that work. Then you have people come in and occupy the State House grounds to pressure politicians to make a difference,” Priest says. “I feel that poetry is a very conscientious language around issues that may draw people’s attention in and put pressure on.

“If it doesn't have an immediate change it changes the pedagogy, the teachings in the state — what we know as our collective knowledge around something. I’m not under the illusion that we’re going to read poems for six rounds and someone’s going to care. I hope, but we’re realistic and understand. This is the way we protest as poets.”

When a metal and stone monument is out of sight, what Priest hopes her words and the words of poets can build is a commemoration to the women that were martyred for the future well being of other women.

“Poetry is literature,” she says. “We can think about the Declaration of Independence and the Constitution as the literature of America. So I think whenever a poet writes something it goes into the canon. It’s there forever, for someone to discover now or 50 years from now. It’s not a physical reaction that’s going to expire tomorrow. It has a life and will affect someone eventually.”