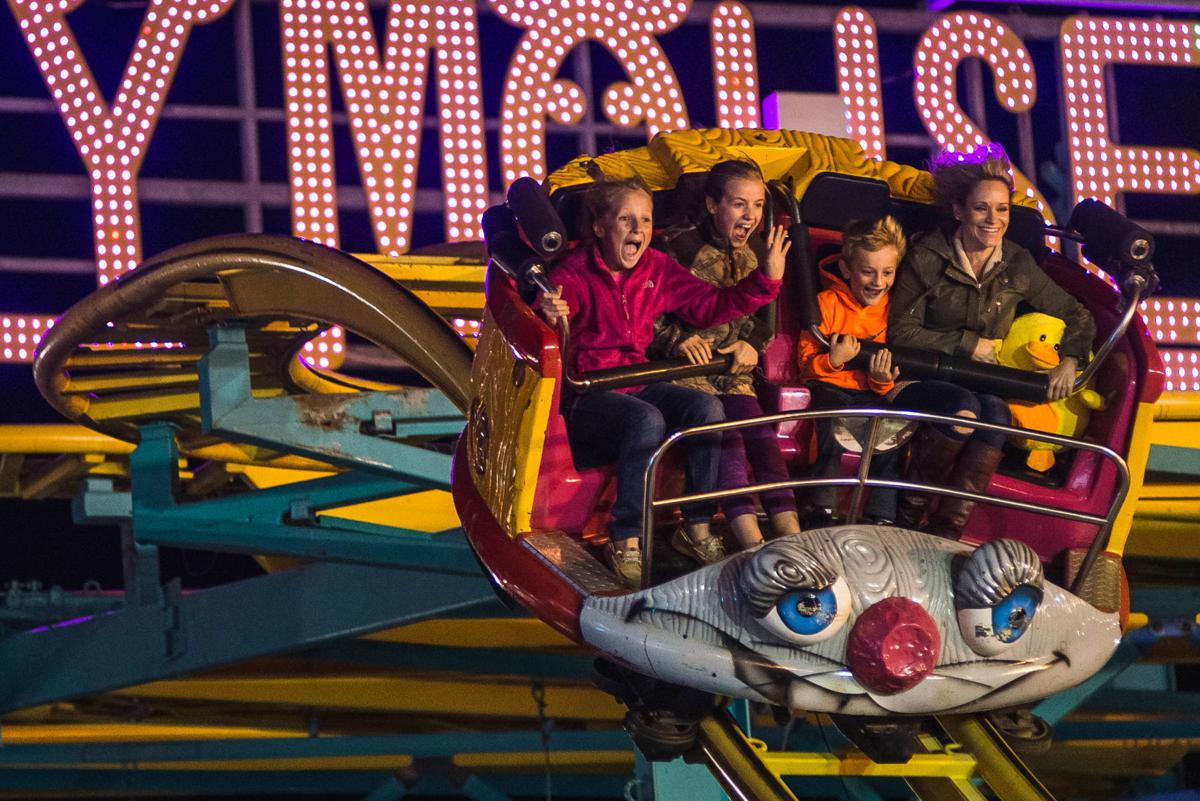 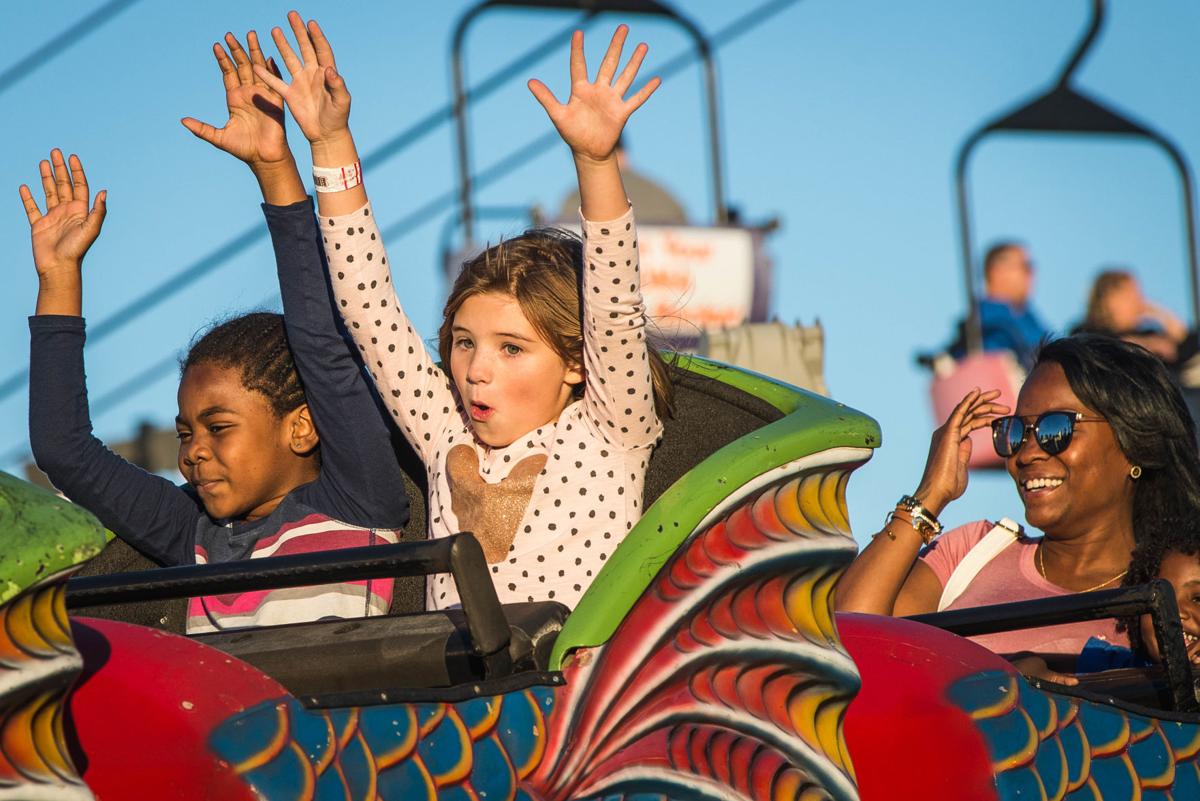 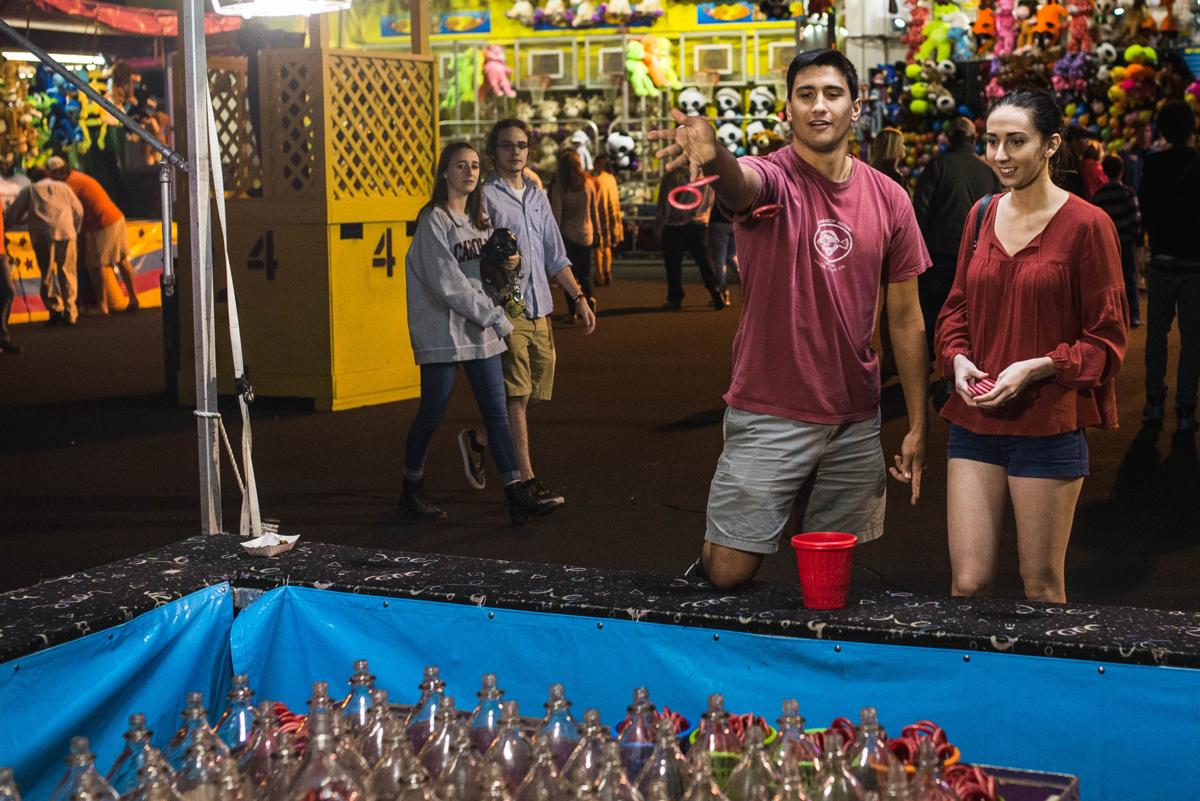 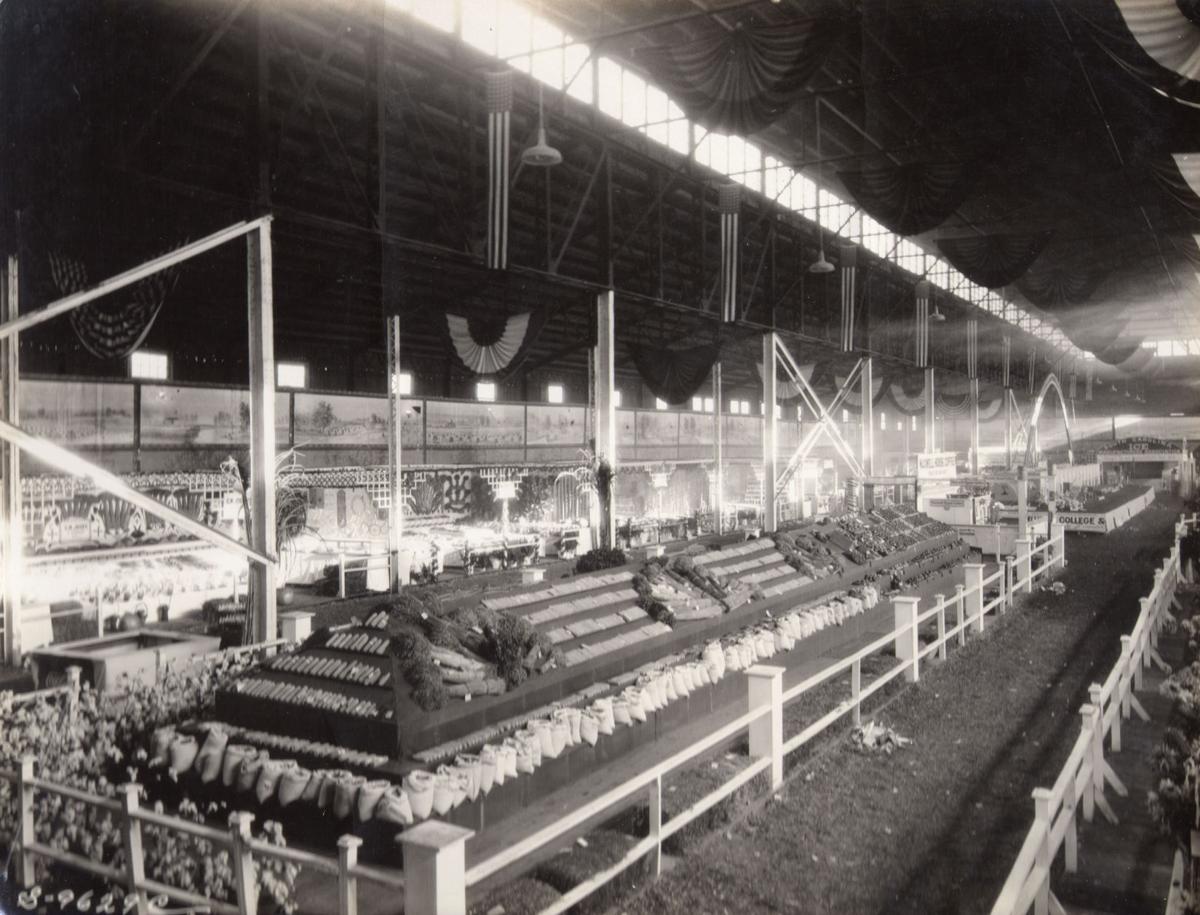 The ride was called the Himalaya.

John Sherrer vividly remembers it from the South Carolina State Fair of his high school days in the ’80s, spinning round and round while Journey and Def Leppard songs pounded in his ears.

“You never wanted to be the one sitting on the end because by the time it was finished you were crushed by everyone else in the car, piled on top of you from the centripetal force,” he says.

As an adult, he swapped the blaring rock ‘n roll and spinning machinery for the soaking splash of the log flume, riding it over and over with his children.

The State Fair celebrates 150 years in 2019. Started as a gathering for farmers to swap stories and information, the fair has changed over the decades. It’s hard to imagine among the rides, food stands and animal pens that the annual event once boasted a debutante ball, horse racing and even girlie shows.

A mix of spectacle and the bucolic, the fair has firmly ingrained itself in the Capital City as an economic driver as well as a fall staple for thousands from around the Palmetto State.

Mix it Up: Fair Nixes Grandstand Concerts, Adds Circus, Among Other Entertainment Shakeups

Of the 443,000 people who attended the fair last year, 40 percent have been coming for more than a decade, according to a survey of fair-goers ordered by event organizers.

Even historic flooding couldn’t keep people away. In 2015, the fair faced the challenge of opening its gates just 10 days after Hurricane Joaquin dumped more than 20 inches in five days over large swaths of the state, rupturing the Columbia Canal and bringing life in the city to a near standstill for more than a week.

“We heard comments like, ‘I had to just get away from all of this,’ and, ‘I just needed something positive,’” State Fair General Manager Nancy Smith says, describing how people poured into the fairgrounds for a temporary distraction.

The fair has become a fixture on the social calendars of many South Carolinians. And it continues to shift. This year’s big change is a transition away from the nationally touring musical acts that for years played the Pepsi Grandstand, this year replaced by a daily circus. It’s the latest in a series of efforts to advance with changing tastes and keep people coming back year after year.

“It’s one of the major events in South Carolina,” posits Tom Regan, a professor at the University of South Carolina’s College of Hospitality, Retail and Sport Management who conducted the 2018 economic impact study of the fair. “What else brings almost 500,000 people to one city?”

One of Bertram Rantin’s earliest memories of the fair was as a high school student from Manning. His mother would drop him and his friends off and they’d wander through the grounds. Approaching the gate, the lights of the Ferris wheel and the shrills of children on the kiddie rides would wash over him, Rantin recalls. He now works as the fair’s public relations coordinator.

The rocket, a decommissioned intermediate range ballistic missile named Columbia and donated to the city in the early 1960s by the U.S. Air Force, stands tall in John Sherrer’s memories. It presides over the North Gate to the fairgrounds.

“You just grew up, hearing that, if someone were lost, to meet your mother at the rocket,” remembers Sherrer, director of cultural resources for Historic Columbia, a nonprofit organization that seeks to preserve the historic and cultural heritage of Columbia and Richland County.

To commemorate the fair’s 150th installment, it has a variety of special programming on deck.

There’s the aforementioned circus, included with admission and open to all attendees, and sculptures on display brought in from Brookgreen Gardens in the Pee Dee.

Also for the notable anniversary, Columbia historian Roger Stroup was commissioned to write a history of the annual festival, entitled Meet Me at the Rocket. In his research, Stroup says he was struck by how closely each fair decade reflected the culture and events of the state at that time.

After World War II, for example, exhibits were added to celebrate South Carolina’s mechanical industry. And before the Civil Rights Act of 1964 ended segregation, a separate fair for African Americans was held on the same grounds a week later.

“The railroads were fairly substantial,” Stroup says, explaining how they were crucial to upping fair participation and attendance.

Travel became less difficult as the railways offered special rates to fairgoers, along with adding extra trolley cars to carry the livestock, Stroup explains: “Now they had thousands of entries.”

There was a debutante ball from 1870 until 1918, “the social event of the year,” Stroup says. And the fair used to coincide with the USC-Clemson football game, known then as Big Thursday.

In the late-1800s, the fair literally spilled into the city as the midway was located on Main Street, allowing the city opera house, downtown shops and restaurants to become important parts of the fair.

The fair has managed to recreate that somewhat as the arts community became more involved, offers Gary Goodman, Smith’s predecessor as general manager.

“The museums started to participate in the fair, so people from outside counties were able to see what Columbia had to offer as a city,” he says, hopefully prompting them to come back, not just during fair, but throughout the rest of the year, drawn back to see those other attractions.

The fair of today

The current fair grew out of a desire to be known for more than just chickens, cows and carnival rides.

When Goodman came onto the state fair staff in the mid-’80s, visitorship hung around a couple hundred thousand people a year.

“We brought in a ride no one else had, a double-loop roller coaster,” Goodman said. “It took up 24 tractor-trailers. It just changed our whole midway into being more of an amusement park.”

SC State Fair in 2016 girls with hands in air

“Around that time, country music just took off,” Goodman explains.

And organizers tried to focus on the agricultural events from the standpoint of an attraction as opposed to just being there for contestants. With a bevy of new entertainment, they were able to draw people back to the fair to attend more than just one of the event’s 12 days.

“We saw it grow from a small agricultural fair to a pretty good cultural event [with the promotion of art and flower exhibits],” Goodman enthuses. “It gave us an opportunity to make the fair better known for all of its aspects.”

South Carolina’s fair is dwarfed by the likes of the State Fair of Texas, with it’s roughly 2 million average annual attendance, and the North Carolina State Fair, which hovers around 1 million visitors each year.

“Iowa is always a big one, too,” Regan says — that one also draws about 1 million people — but he adds that the South Carolina fair ranks in the top 20 nationwide in both attendance and quality measures (cleanliness, safety, etc.).

If the weather is decent, Regan expects organizers will see a bump in attendance due to the anniversary celebration.

Increased attendance means more eyes on all that the capital city has to offer and the potential for return visits for more than just the fair.

“We certainly view the State Fair as a major attraction for Columbia each year, with visitors from all over the state and Southeast region,” says Charlene Slaughter, spokeswoman for the city’s tourism entity, Experience Columbia. “It’s something that is unique to Columbia in the state and we have the opportunity to welcome visitors who have never been here or only come into the city to go to the fair and leave. Our hope, as always, is that they will explore Columbia, stay in our hotels and eat in our restaurants and find one of the many unexpected experiences that Columbia has to offer.”

According to Regan’s study, the total economic impact of the fair on the state is $45.5 million, with $16.6 million of that coming from wages. And there’s the added benefit of it being an ongoing annual event.

“It’s not a one-time thing,” Regan explains. “With Hootie & the Blowfish [playing three nights at Colonial Life Arena in September], they’re in, it makes a splash, you have spending and impact, but then they leave. The fair is over 12 days and that impact is going to stay in the economy because that event is going to come back. Lexington and Richland counties, they’re major beneficiaries of that fair.”

The event also generates $2.5 million in state and local taxes, according to the economic impact study.

The vast majority of fair attendees are from Richland, Lexington and surrounding counties, the study showed. But there are a number that come from Charlotte and Augusta and some have come from as far away as Louisiana and Virginia.

“We are a good little mini vacation for folks,” Smith, the fair general manager, claims.

And for those who live here, Sherrer says, “It’s almost like a rite of passage into fall. People are kind of embracing a different season.”

Employees of the university and downtown businesses can be seen streaming to the fairgrounds on their lunch breaks, Sherrer notes.

“It’s just one of the things you do,” he says. “It’s become a kind of way of life for that period in October.”

“It’s one of those traditions people have come to love and enjoy,” Rantin says, likening it to okra festivals, football games and Christmas lights. “I don’t think I could imagine Columbia without the South Carolina State Fair.”