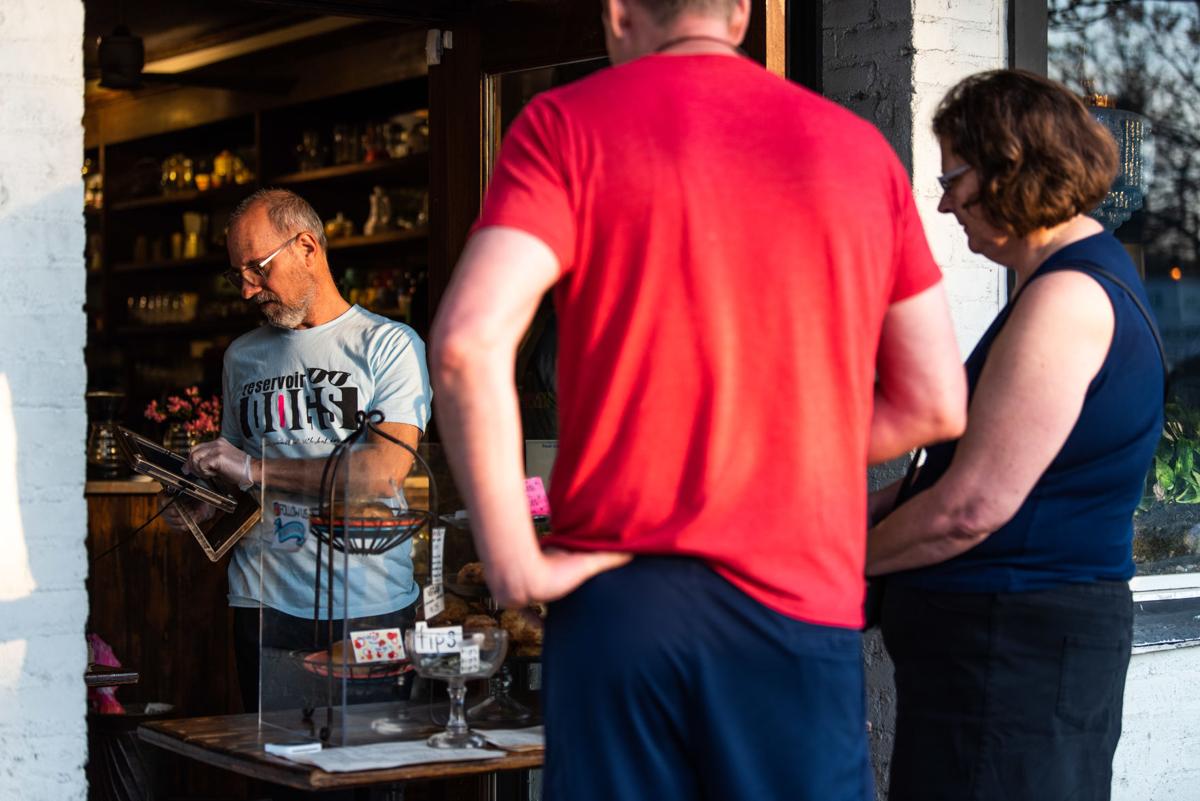 Owner Sean McCrossin serves customers at the outdoor counter the Five Points location of Drip Coffee set up in the early days of the COVID-19 pandemic. 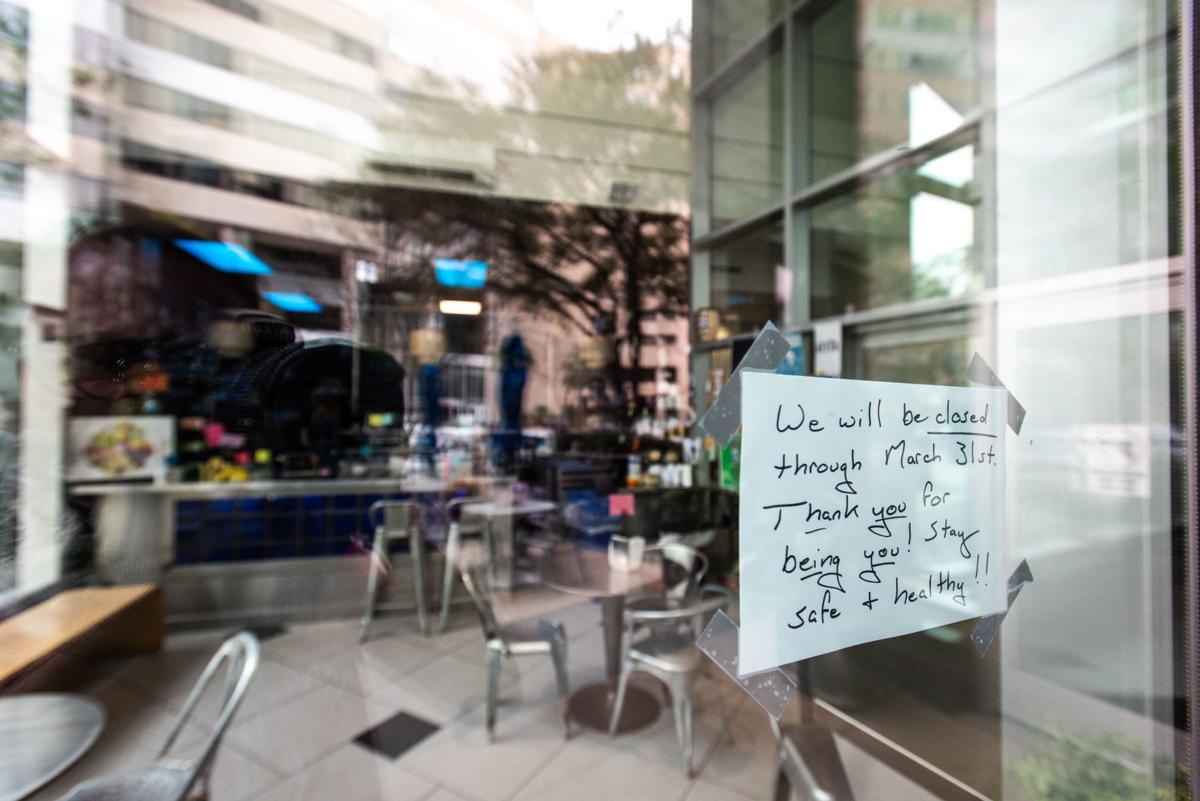 A sign on the door announces the temporary COVID-19 closure of the Drip Coffee shop on Main Street.

Drip Coffee opened amid what owner Sean McCrossin described as the third wave of coffee.

In a story for Columbia Home and Garden in 2012, he said it was a period marked by an emphasis on personal relationships between growers and customers, and attention to detail in the coffee making process at cafes.

On June 9, McCrossin, who now owns two Columbia shops, celebrated the 10th anniversary of his original Five Points location. The location will offer 50 percent off coffee and espresso drinks and merchandise and 10 percent off record sales on the day to celebrate.

Speaking with Free Times, he isn’t sure how to describe what’s changed in the coffee world.

“I certainly am not here to coin a new phrase,” he said. “I really don’t know, but I will say that we live in a world where it’s a global economy. … I think coffee shops have expanded in that way as well. I think that customers' knowledge has expanded and I think coffee roasters (and) shops have kind of expanded their knowledge as well.”

Turning to the advent of technology and emerging customer palates, McCrossin said anyone can be a critic now through platforms such as Yelp. It’s created expectations before they walk in the door.

“I think the palate has expanded and therefore the expectations of coffee shops expand,” he explained.

This week, Drip and McCrossin are celebrating a decade of operating in the college neighborhood, where the shop rests nicely within the district’s mercantile identity.

Beyond coffee, the shop offers a well-regarded food menu that McCrossin shifts every six months, which he described as one of his favorite aspects of the job. Drip has no grill hood, so the workers craft almost everything on panini presses with mostly housemade or locally sourced ingredients.

The shop also sells records, a nod to McCrossin’s previous experience running a record store and label in North Carolina.

Since Drip opened, the Columbia coffee scene has expanded greatly. Local roasters Indah and Loveland have risen, joined by other new independent shops like Curiosity and Piecewise.

Free Times spoke with McCrossin about his 10 years owning Drip and the way the city’s coffee landscape has shifted. The interview has been edited for length and clarity.

Free Times: How are you feeling about Drip turning 10?

Sean McCrossin: I guess it's a milestone, 10 years. I'm not really one to look back too often. I'm constantly just moving and looking forward. So I guess I haven't really had too much time to reflect on this. You know, this is really the first interview and moment I've had to reflect on 10 years. But I feel good, you know. I feel very happy to be part of a community. We've hopefully served the community in ways that best served it.

You said that you don't really look back. Is that how you are as a person?

Well, certainly, when I make a mistake, I like to stop and think about the mistake I made and fix the problem.

I try not to be too stagnant, though, and I wouldn't really say that I'm too much of a nostalgic person. There's certainly a romantic side to me, but I don't linger too often in that, in the melancholy.

How do you view Drip's place in Columbia?

Well, hopefully, we're providing a safe place for people to congregate, feel comfortable in and to express themselves. We are certainly part of the food scene in Columbia, but just a small part of it.

How has Drip’s coffee program changed in 10 years?

I guess it's expanded a little bit. I think we probably have added maybe two or three more choices as time has gone on. Generally speaking, I try to have at this point two African coffees, two South American coffees and when possible, maybe an Asian or two Asian coffees.

We've taken off French press over the years, just because it wasn't that well received. That's sort of the benefit, I think, to actually working behind the counter and being able to hear what customers like and don't like.

How have you seen Five Points change over the years?

It is a really hard question.

I guess being in a college town, you do have a new influx of people that come in, that move into town, every single semester, every single year. So I think that helps keep things sort of green and constantly evolving.

But then you have the stability of a lot of these retail shops that have been here for years and years. That offers sort of a grounding to your own personal surroundings. I think (that’s) one of the advantages of being a local business, every shop can kind of adapt to the moving times. I like to think that Five Points is more open to change than it ever has been.

Globally there's been a lot of great movements socially, politically. I think Five Points is sort of part of all that as well, in a very small, micro way. We have some diversity down here that we probably had before.

When people talk about the way Five Points is changing, or needs to, it's about the nightlife versus daytime.

Some of those (nightlife) businesses have closed, but others are taking their place. There’s always going to be this sort of shift back and forth. I kind of wanted to avoid talking about the controversy there, because I think that is a broader conversation. Every college town has the same exact situation. Which I think is kind of deeper than, you know, bars.

How has Columbia's broader coffee shop scene changed in the last 10 years?

There's several coffee shops now that have opened up. There's more Starbucks, you know. Starbucks opened up and I think it's really indicative of a growing town. It's kind of exciting.

Who wins? The customer. That's why we're all here. We're all here to take care of the customer and to kind of appeal towards whatever palette they may have.

When another coffee shop opens up, it would be unnatural for me not to have a moment of anxiety. But I'm also reminded at that point to pivot and, 'Okay, well, what are we doing well and how can we make that better? And what aren't we doing well?’ And kind of discard that. Rather than focus on anything anybody else is doing, just focus more on what we're doing.

It's all about the rising tide at the end of the day.

How have these changes affected running Drip? Has it become easier or harder?

You have more coffee shops opening up and you have more customers interested in coffee and getting out drinking coffee and engaging in the whole social aspect of things.

With COVID-19 feeling like it’s going away, how do you reflect on that time?

Perseverance. Dedication from the people I work with. You know, dedication from our customers. The uncertainty was really difficult.

Putting safety in the first queue and trying to make sure that stayed at the forefront was the most important thing. But the uncertainty was difficult, because things constantly changed and new information constantly moved forward. So I tried to be reactive enough to keep safety at the forefront, but also not make it more difficult for us to operate.

People were just so gracious. It was really nice to see people support us. People were tipping us $20, $50, you know. I think about it now and I tear up. I really had to catch myself, because the generosity of people was really, really breathtaking.

It could have been easy to give up, but you realize that you're actually here for a bigger, broader cause.