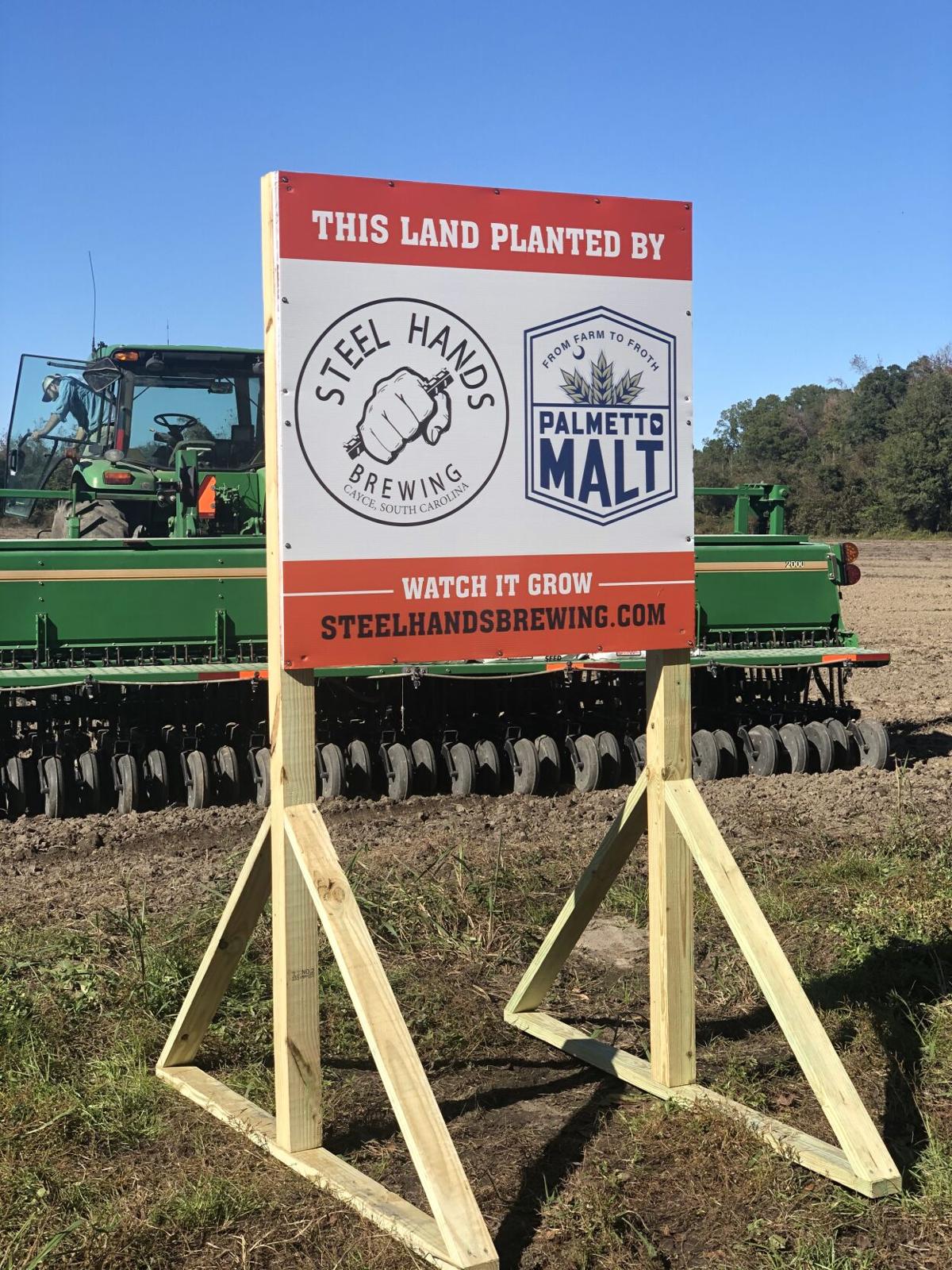 A sign promoting the partnership between Palmetto Malt and Steel Hands Brewing. 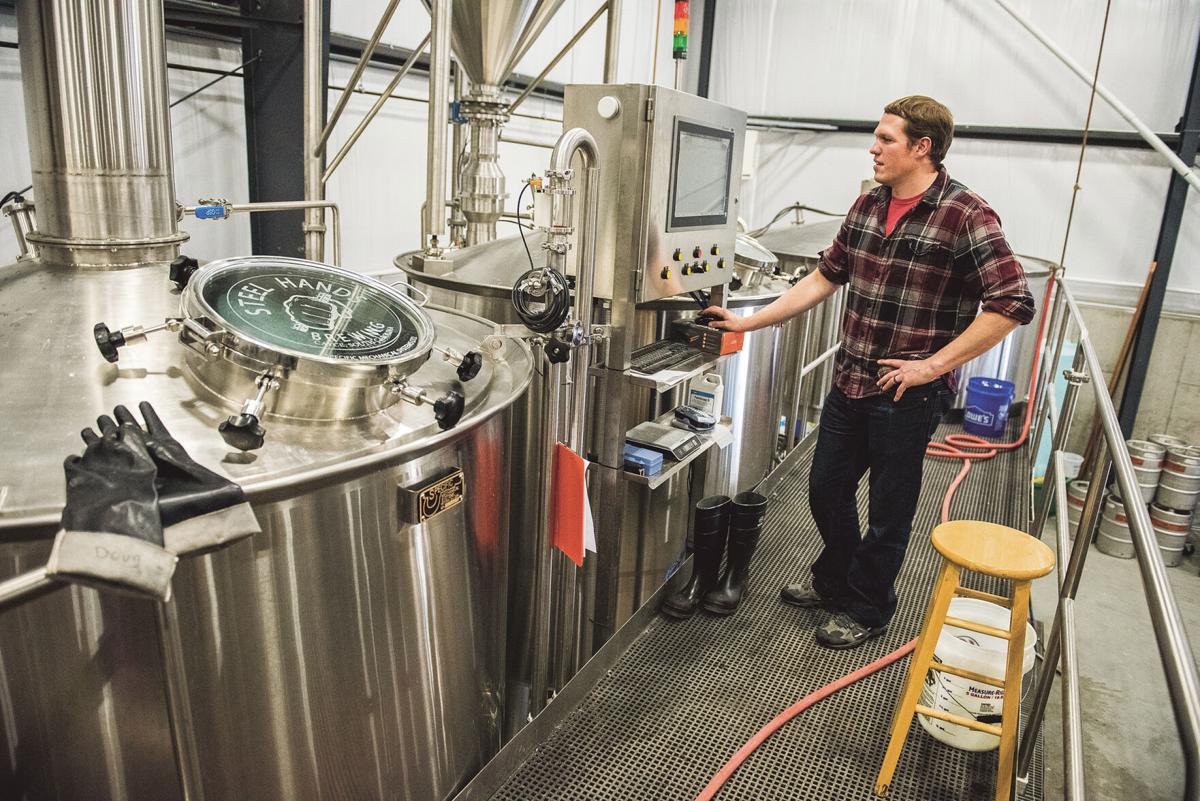 At restaurants, the hip phrase for some time has been long been "farm to table." For breweries, it could soon be "seeds to sud," if Cayce’s Steel Hands Brewing is any evidence.

The local beer operation has a new contract with Palmetto Malt, the only in-state craft malt producer. Palmetto is dedicating a barely field to producing malt for Steel Hands, which will put it to use in some of its 2021 beers. The partnership comes after the brewery found success using the St. George farm’s malt in a previous Oktoberfest beer.

“I think, at its roots, we’re really trying to support another S.C. business,” said Steel Hands brewmaster Doug Smith, who applauded the quality of Palmetto's product. “It's really cool for us, as brewers, we don’t always see the raw product."

On Tap: A guide to Columbia's winter beer releases

Palmetto Malt and Steel Hands’ contract could eventually yield roughly between 12,000 and 13,000 pounds of malt upon harvest and processing. It’s the first such exclusive contract for Palmetto, but the farm's malt is used by other local breweries, said owner Jared Weathers.

The Steel Hands partnership is mutually beneficial, both parties posited. For Weather’s operation, it’s a guarantee that helps gird next year’s finances, while the Cayce brewery gets a guaranteed supply of malt.

“As it comes in high demand we get high priority on what is some of the best local product,” Smith posited.

Weathers’ malts have also been used by roughly 25 breweries throughout the state, including Lexington's Hazelwood and Angry Fish.

That’s an impressive portfolio when you consider Palmetto Malt’s age and the state’s lack of a history for in-state malt production. Often, Weather is met with mild disbelief from breweries unaccustomed to an in-state producer when pitching his product, he said.

Weathers started planning the operation roughly a year ago, but only started production three months ago, he said. He’s been farming on his family’s over-half-century-old farm for almost 10 years, but was exclusively working with row crops like cotton and peanuts.

Entering the malt production industry, he hoped to address a poor market for row crops. He was met with an industry devoid of a footprint in a state that has temperamental weather for growing the barley, which Weathers said prefers consistent temps around 55 to 60 degrees, used in malt. To learn the process, he went to Texas and observed a malt producer there and later took a class in Colorado.

Now he’s working with Clemson University to help hone his malt production, focusing on things like nitrogen levels and seed rate, he said.

The high start-up costs, paired with the growing constraints in this region, contribute to the state’s lack of producers in an already sparse industry, Weathers suggested. Steel Hands' Smith also pointed to craft brewing's relatively small foothold in South Carolina as another reason for the scarcity of malt producers.

“I don’t even know how many craft malthouses are in the nation, it’s probably not more than 100. In the Southeast there’s few,” he said.

Per a map from the Craft Maltsters Guild, there’s only three craft malt producers in the immediate region. All three are in North Carolina, while a fourth is farther north in Virginia.

Weather’s partnership with Steel Hands was partially by chance. He was drinking in the taproom, met a city council member who then introduced him to an owner. At that time, the malt production facility was still in the planning phase, but the two agreed to pursue a partnership if the operation materialized.

Steel Hands bought some of the farm's first batch and its quality was surprising, Smith said.

“It came out much better than I expected,” he posited.

He detailed that, in his experience, it takes one to two years of development for a new malt production house to produce at that quality level.

Weathers hopes to continue to build contracts like these with other breweries. It would help them lock in prices, potentially lowering them for breweries. Still, he acknowledges his product will be more expensive than mass-produced malt.