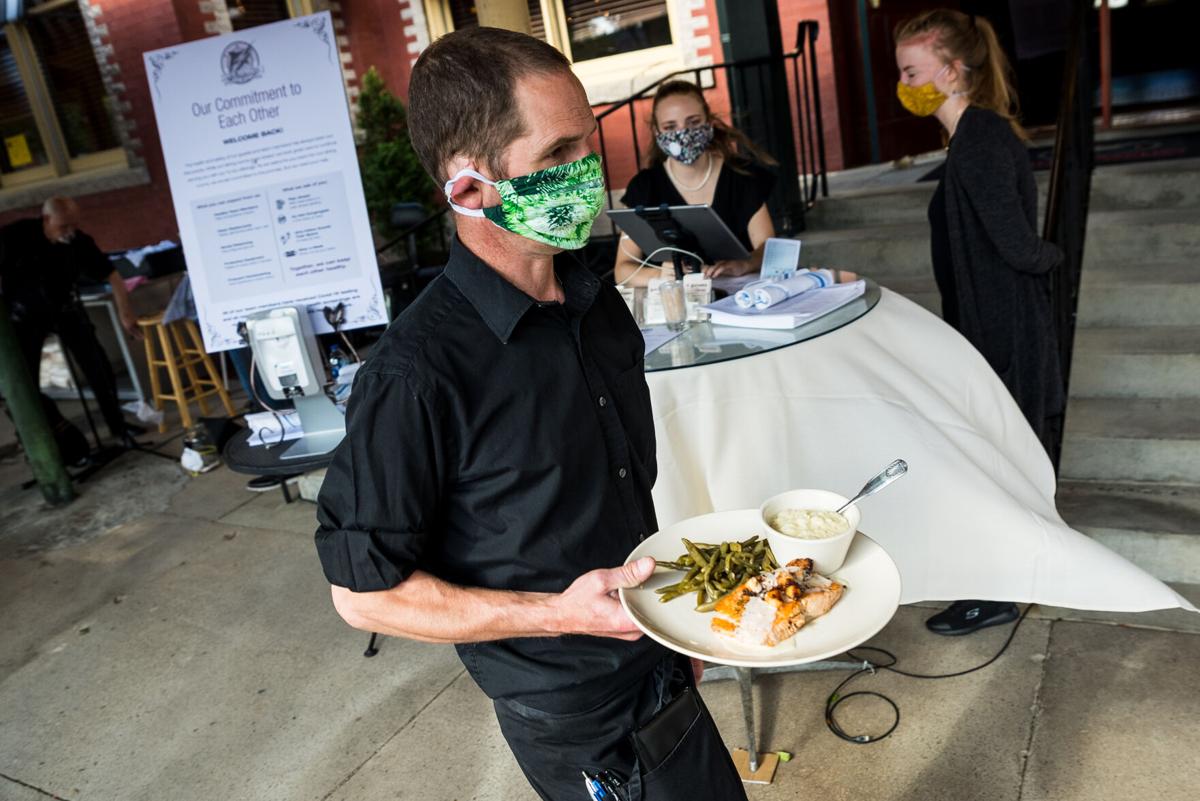 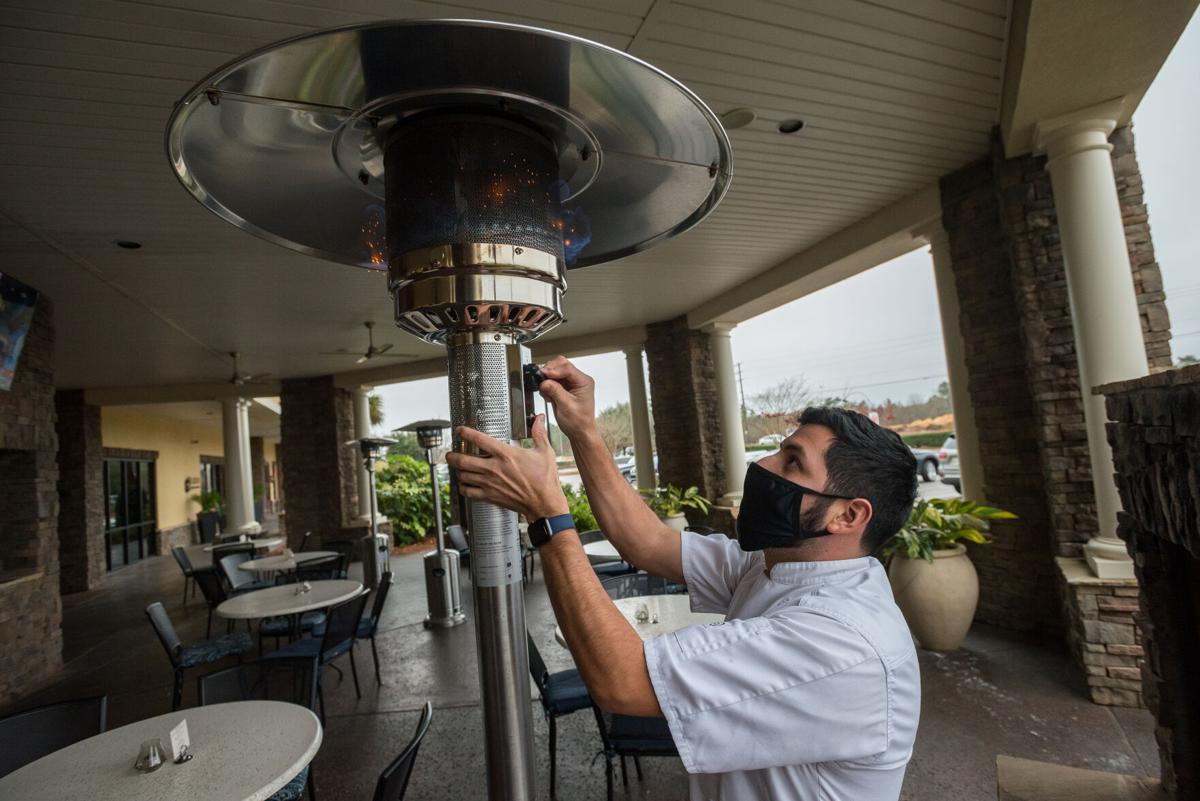 Javier Uriarte sets up a heating lamp at Ratio. 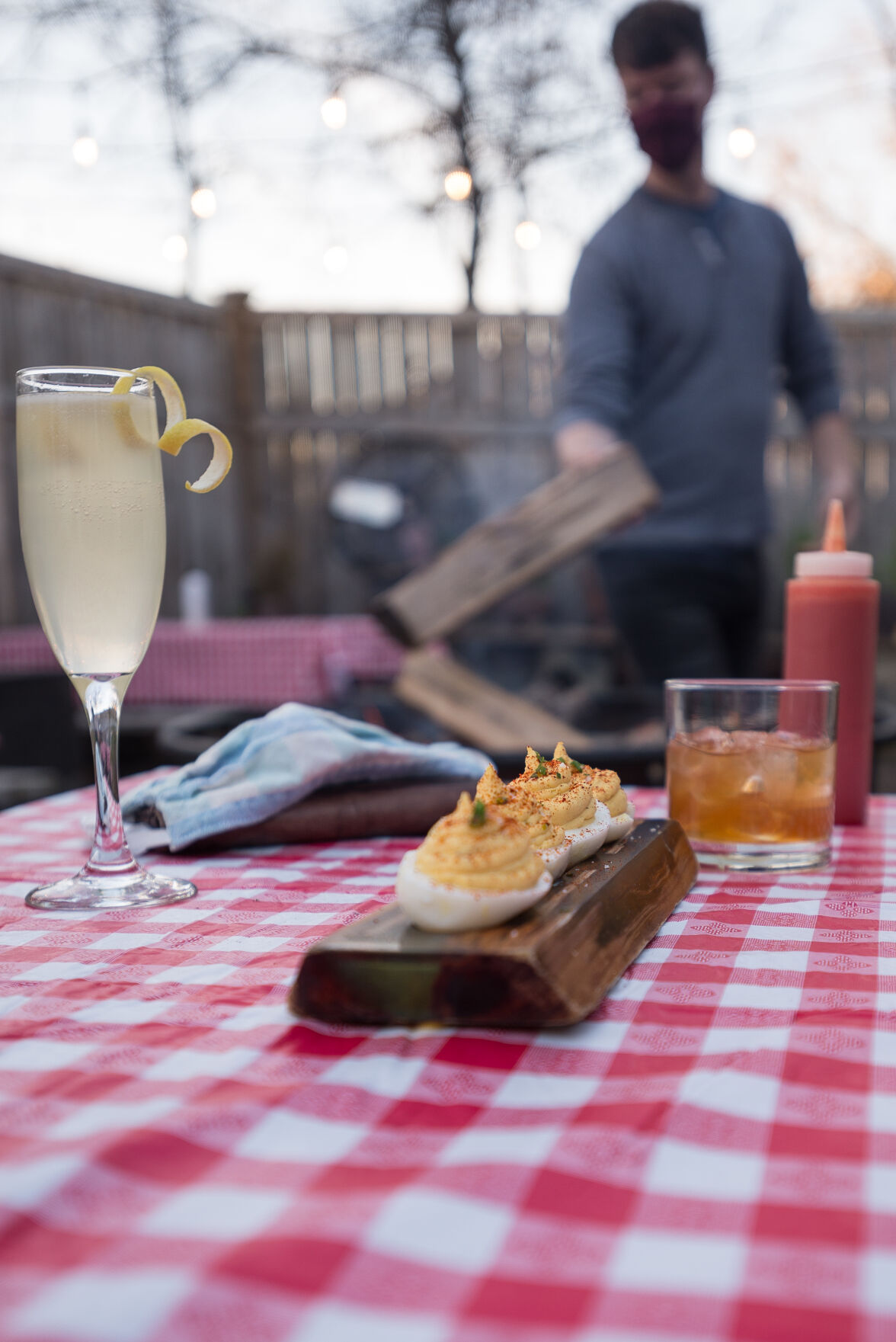 The patio at The War Mouth

2020 was like a persistent haze. Days and weeks and months went by with seemingly little change in our lives.

But while we all spent long stretches of last year at home with little to do, changes did come to the Columbia food scene. Indeed, in many ways, it changed more than usual.

The year was marked by almost insurmountable difficulties, but some successes still managed to peer through the cracks.

For restaurant and bar workers, 2020’s non-locked-down months were filled with repeated face-to-face (and hopefully masked) interactions with customers. They still face unsteady employment as various restaurants continue to grapple with temporary or permanent closures.

Restaurant and bar owners grappled with difficult decisions over how to operate. Closed for indoor dining but open for take out? Open at full capacity? Open at half capacity? Closed entirely until a vaccine arises? Answers varied, and continue to do so.

Highlighting some of the Columbia deals available during SC Restaurant Week

We decided to look back at this weird, difficult year as we turn the page to one that’s hopefully a whole hell of a lot better.

At that point, the main industry concerns surrounded the state of the Vista, as the downtown neighborhood endured several closures at the tail end of 2019. However, most expected it to rebound as experts purported the district had simply grown overstuffed with restaurants.

“I think that it’s a matter of coming of age, more so than a breakthrough,” Wes Fulmer, executive chef of the Vista fine-dining lynchpin Motor Supply Co. Bistro, said at the beginning of the year.

There were tangible reasons for optimism. Openings throughout the area garnered excitement — including Sunshine Cafe in the old Carolina Cafe space in West Columbia and an announced Cayce pizza pub from chef Henry Griffin.

Even the BullStreet District project countered a blow (the closure of the Segra Park-adjacent Bone-In Barbeque, the first and only restaurant to open in the development) with a major win (the announcement of the forthcoming Iron Hill Brewery and Restaurant).

The early months’ scariest moments passed with what ultimately seemed like little cause for concern — such as the rumors the rumors that started swirling that Five Points’ iconic Yesterdays Restaurant & Tavern was going to close. They sold their building, the owners assured, but planned to keep the resturant open for the foreseeable future.

“Yesterday's is still here, just like it always has and will still be here,” said co-owner Darrell Barnes in late January.

Barnes prediction was not to be.

He closed the restaurant in April, as Yesterday’s endured reduced sales and uncertainty as the COVID-19 pandemic took hold. It was the first coronavirus-induced closure that truly rocked the city’s food scene, solidifying the idea that the illness that led Gov. Henry McMaster to ban indoor dining starting in March and stretching until early May would take an enormous toll.

The spring found restaurants subsisting almost entirely on takeout sales, as big annual events like St. Pat’s in Five Points and The Masters golf tournament in nearby Augusta, Ga., which typically generate some needed high-revenue days.

The pandemic’s effects cut hard for these businesses with already low profit margins. If a temporary closure happened, it could leave a restaurant behind on bills or unable to support their employees.

Motor Supply owner Eddie Wales told Free Times in March that he was worried his planned two-week closure might not be enough. It wasn't, as the Vista fine dining stalwart would go on to be closed longer as it returned slowly to take out only, then to reduced capacity indoor dining.

“I’d love to say that I’m super confident,” he said then of that initial closure plan. “Everyone’s biggest fear is that two weeks turns into six or eight.”

To-go only food was met with moderate interest from diners, but the sales were far from enough to keep restaurants open. Some, like Kristian Niemi’s Bourbon and Black Rooster, elected to temporarily close after finding it unsustainable financially.

McMaster’s move in May to bring back indoor dining with recommendations for reduced capacity was met with skepticism by some who felt it was too soon, but it appeared to pay off for some restaurants in a business sense.

An analysis of sales by commerce company Toast, which produces a restaurant sales system for touch screen devices, showed that the state rebounded better than all but four in the country.

While flawed and criticized, the federal government's first COVID-relief bill also packed several programs that assisted the hospitality industry like the Paycheck Protection Program and more.

Critics, however, said it came with too many stipulations, in effect being unhelpful if restaurants and bars were unable to open to take advantage of it. Meanwhile, the City of Columbia produced a smaller forgivable loan program aimed at assisting struggling small businesses.

The return to business brought a dilemma for formerly laid-off restaurant workers who were either unable or unwilling to potentially expose themselves to the virus.

David Adedokun, head bartender at The War Mouth, reasoned that workers, however eager they might be to return, were being put in a position they shouldn’t be. Adedokun said he would have returned if The War Mouth, then unopened, had elected to reopen when it was first possible.

“I’m definitely of two minds about it,” he said in a May interview. “I don’t think they’re entirely wrong to be excited to come back to work, I just think that they shouldn’t have to be doing it under this context. They shouldn’t have to be weighing the continuation of their livelihood against a health concern in an area like ours that hasn’t been hit as hard as other places.”

For owners, returning to business often brought criticism. Five Points college bar Pavlov’s was hit with such backlash from the public when video of their reopening emerged showing large crowds and a packed interior.

Owner Jon Sears reasoned the choice was between opening the bar or facing closure.

“We’re doing the best we can,” Sears said in an October interview. “Of course I’m concerned about the crowds and we don’t want to spread COVID and hurt anyone’s health, but I’m also excited to reopen. If I can’t open then I’ll go out of business. We waited (responsibly) and didn’t want to roll the dice and do what some of those other bars did.”

As COVID-19 continued to drag on, the restaurant industry grew more restless. In December, the South Carolina Restaurant and Lodging Association looked to refute accepted science in a bid to push other states to lift renewed restrictions as coronavirus case numbers spiked. The group pushed out a survey soliciting input from restaurant owners to be used, in part, to debase the link between COVID-19 and indoor dining.

Some restaurants, like The War Mouth and LeBrasca’s Pizza, took to social media detailing their struggles, and were met with an outpouring of support, steadying leaky ships.

Through the dreadful year, good things did still happen.

Many of the city’s restaurants have survived thus far, despite dire predictions that numerous independent restaurants could close.

And there were still some exciting openings. Former Hendrix chef Javier Uriarte staked out on his own and opened Ratio, a tapas-style Peruvian restaurant in Northeast Columbia. Loveland Coffee debuted a long awaited brick-and-mortar coffee shop in Irmo. And, recently, the Middleton family announced plans for an oyster bar/microbrewery/barbecue restaurant to be called Smoked on Columbia’s Main Street.

Food trucks notably managed to carve out a vital role during COVID-19. As the pandemic became tiresome and fatigue set in, more and more drinkers and eaters flocked to outdoor spaces to regain some normalcy in a safe manner.

And, as they’d already been doing, mobile food operations continued to churn out some of the city’s most reliably delicious eats, with newcomers like smashed patty master Chubby’s Burgers joining established favorites like the Los Chicanos taco truck and City Limits Q.

A Peace of Soul, which had been serving its beloved vegan comfort food from its truck, reopened in its renovated Cottontown home in February.

And the rest of the restaurant-adjacent world kept churning, too. Local small-scale farmers who typically sell to restaurants found ways to pivot. Some launched direct-to-customer vegetable boxes or community supported agriculture projects, while others relied more heavily on farmers markets.

Those markets also continued to play a key role in some communities. In the Pinehurst Neighborhood, April Jones’s backyard farmers market continued to give a direct hub for fresh produce in a food desert community.

As 2021 enters its infancy, restaurants and bars are still struggling mightily. The lower temps and occasional rainy weather have curtailed outdoor dining, making it harder for those uncomfortable eating inside to patron local restaurants.

“Without any sort of assistance program, through the winter ... if it’s a long cold winter, I don’t know how long we could last,” said Black Rooster and Bourbon owner Kristian Niemi in late October.

The fall was a boon for the ailing industry, as it stretched on with warmer than average temperatures and sparse rain. Owners have shelled out big bucks to try and elongate the outdoor seating season.

The aid that Niemi called for came, too. Congress passed a second round of COVID-relief funding in late December. It reopened the PPP program with improvements and added other tax assistance programs as well. While a far cry from what some in the industry called for, it’s being viewed as a stopgap toward more direct aid for the industry.

Joey Von Nessen, a research economist at University of South Carolina’s Darla Moore School of Business, said in December that it would work to shore up the industry.

“I think this is a necessary bridge to get us where we are today and, essentially the spring, which is when we anticipate the vaccine will be routinely distributed and begins to restore consumer confidence.”

2020 was a most unusual year on the local theater scene

Not all shared his optimism, including Drew Martin, a professor in the University of South Carolina’s School of Hotel, Restaurant and Tourism Management. He referenced a survey done by the National Restaurant Association in November. That survey said 17 percent of the country’s restaurants had closed and that 58 percent “of chain and independent full service operators expect continued furloughs and layoffs for at least the next three months.”

Martin asserted the legislation wouldn’t be enough to save many and was wary that another aid package would take too long to pass in today’s political climate.

“I think we’re in trouble to be honest. This is not going to fix the problem. It props us for a couple of months at the best,” he posited.