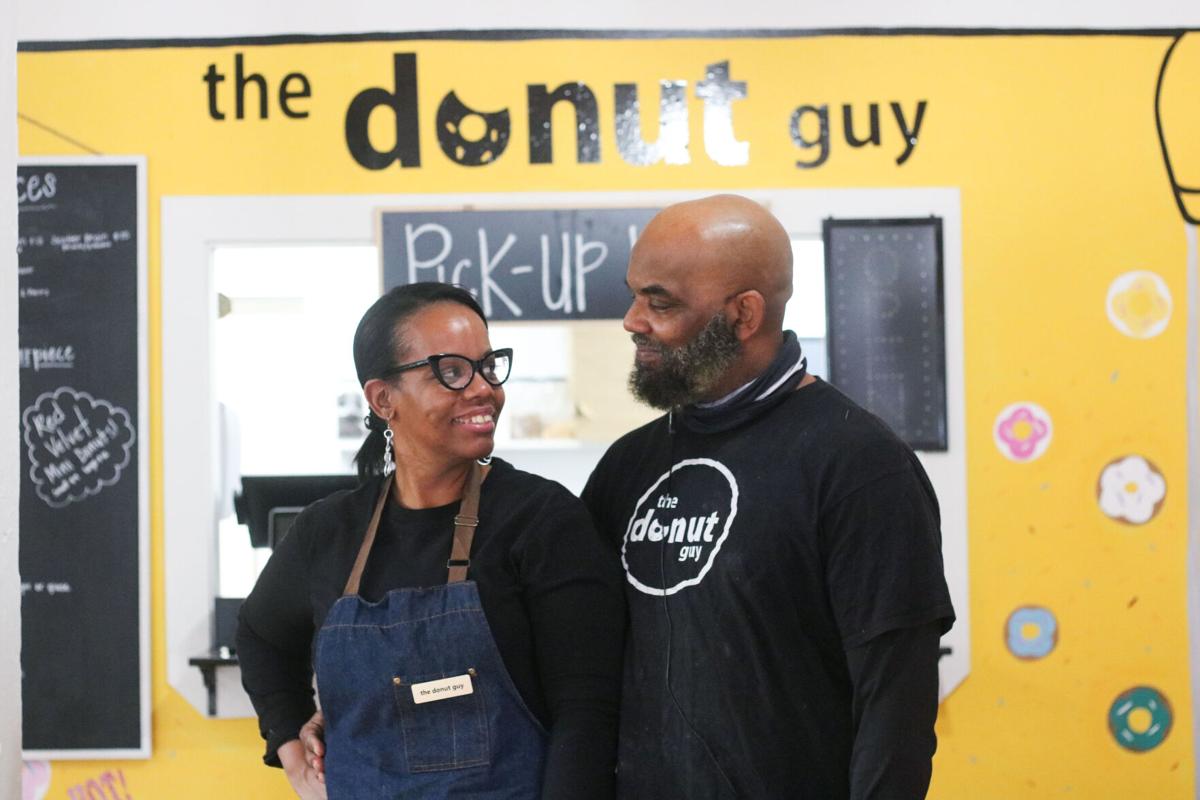 Shaun and Crystal Paulk started The Donut Guy over a decade ago, when Shawn was hurt on the job and looking for work. A used donut machine set off a series of events that led to them opening their new restaurant in Columbia's Vista. Photo by Hannah Wade 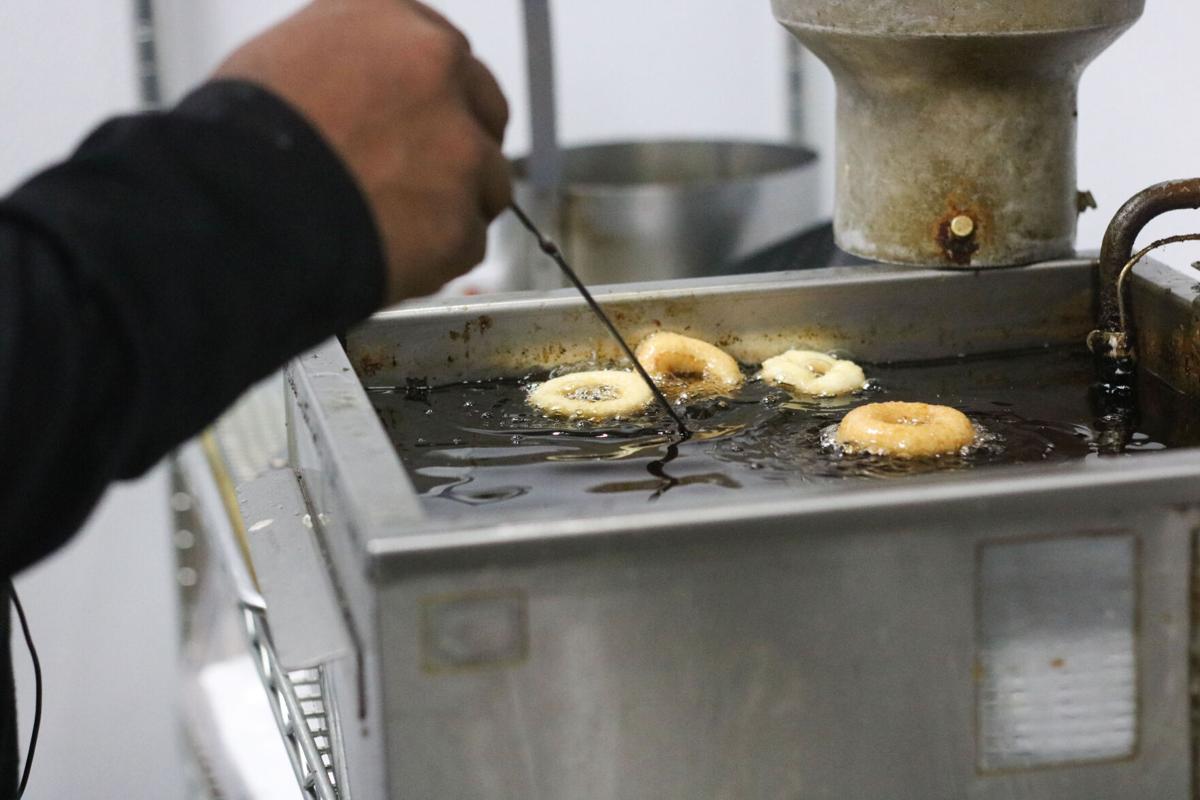 Shaun Paulk, who co-owns The Donut Guy with his wife, Crystal, fries donuts at the restaurant's new location in the Vista on Jan. 25. Photo by Hannah Wade. 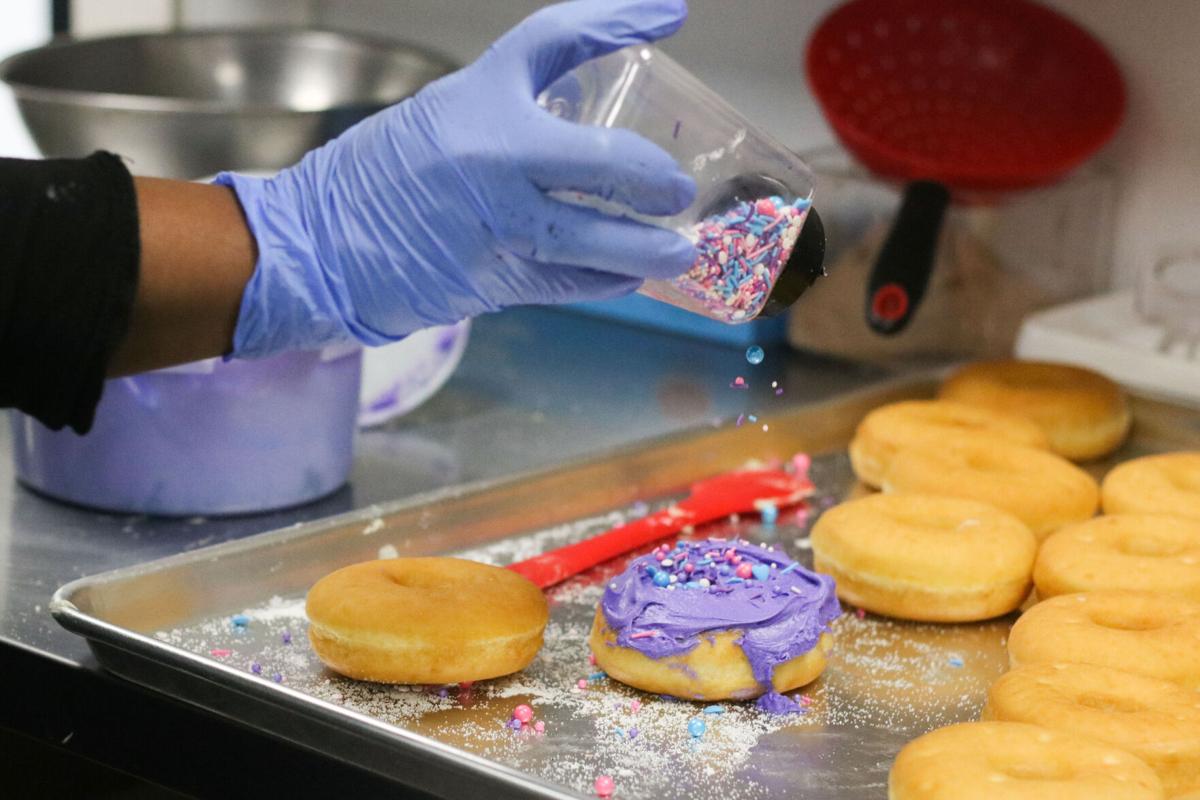 Crystal Paulk, who co-owns The Donut Guy with her husband, Shaun, decorates donuts at the restaurant's new location in the Vista. The couple said their three daughters all help with the business — from naming the donuts to helping with technology. Photo by Hannah Wade. 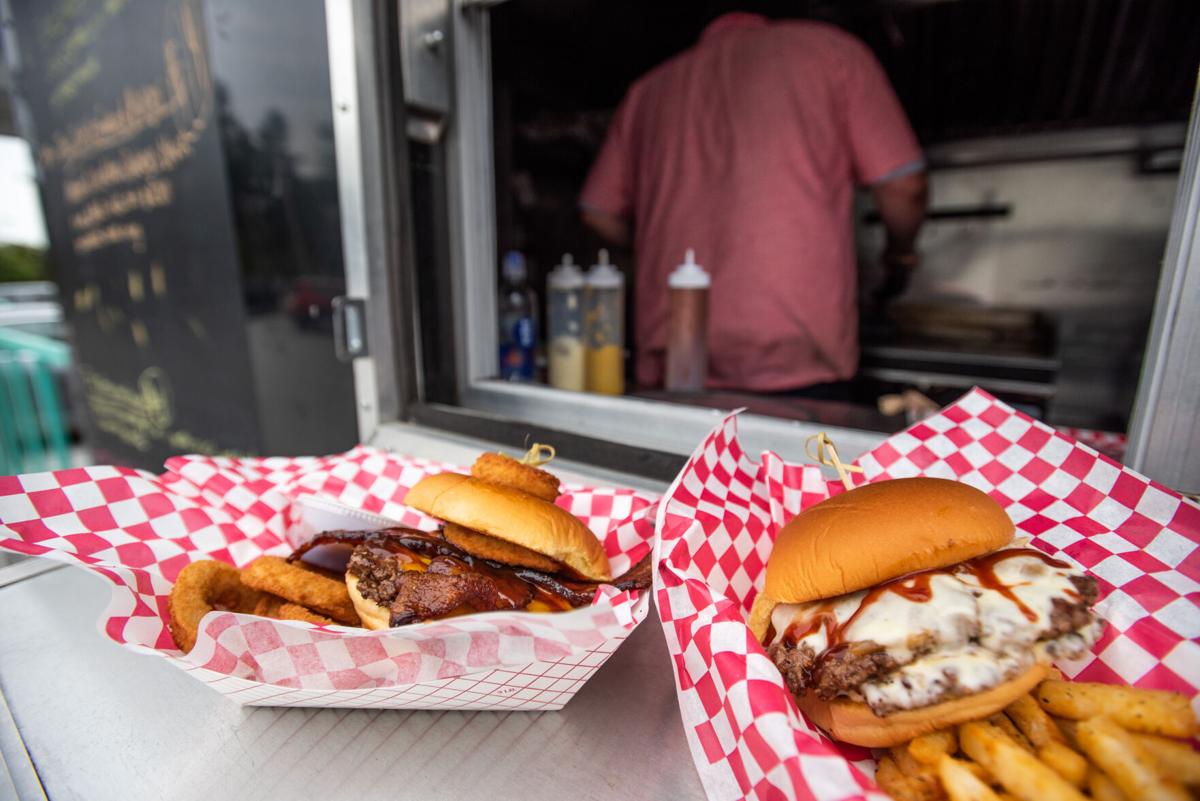 Two of Chubby's burgers. The popular food truck emerged at the start of the pandemic and will soon open up a new permanent location as it joins other food trucks in making the switch to brick and mortar spots. Photo by Thomas Hammond.

Shaun and Crystal Paulk started The Donut Guy over a decade ago, when Shawn was hurt on the job and looking for work. A used donut machine set off a series of events that led to them opening their new restaurant in Columbia's Vista. Photo by Hannah Wade

Shaun Paulk, who co-owns The Donut Guy with his wife, Crystal, fries donuts at the restaurant's new location in the Vista on Jan. 25. Photo by Hannah Wade.

Shaun Paulk got hurt at work, leaving him temporarily jobless, over a decade ago. With a donut machine sitting idle in the garage, his wife encouraged him to set up shop at a local farmers market.

What Paulk and his wife, Crystal, didn’t know was that the decision would turn into a full-time business, The Donut Guy.

In the last few years, food trucks turned brick and mortar spots have gained popularity in Columbia and that has only continued in the last few months. The Donut Guy opened up earlier this month in the Vista and Chubby’s Burgers food truck announced a new permanent location in Blythewood last week.

The two joined Java Juice Cafe's storefront in late 2021 and Rambo’s Fat Cat Biscuits, which started as a husband-wife biscuit-serving duo at Soda City and has since opened a Cottontown storefront location in the last year and a half.

“We kept getting more popular and more popular. People were like 'Hey, where can we find you today?' We'd get probably 50 or 60 (messages) every day asking where we were,” said Chris Sarant, owner and chef of Chubby’s Burgers food truck.

Sarant began his food truck early on in the pandemic and has operated it for almost two years. He announced in a social media post last week that he’d open up Chubby’s Burgers & Brewhouse at a permanent spot in Blythewood.

More and more small business owners who are new to the game are choosing to start out in a food truck or in a tent at a local market as a way to test the waters before opening a full-fledged restaurant.

The food truck industry grew an average of around 8% every year from 2011 to 2016, according to a report from Food Truck Nation. Food trucks like The Donut Guy and Los Chicanos are regulars at Soda City Market. While others like Chubby’s made rounds at local breweries and bars.

Soda City, Columbia’s weekly farmer’s market, has been a popular starting point for many chefs looking to test out ideas for a new restaurant or business — it’s where The Donut Guy gained popularity in the Columbia area after they set up shop at the market around six years ago.

It’s also where Rambo’s Fat Cats Biscuits got its start.

“We saw this trend of biscuit shops being in all these other cities and we didn’t have one in Columbia,” said Renee Adams, who co-owns Rambo’s with her husband, Todd, “It took us just a couple months to get everything together and get set up at Soda City and the first weekend we were there we were actually blown away by the response.”

After about two years of operating on Saturdays at Soda City, the Adams signed a lease in March 2020 to open up their brick and mortar location later that year.

The start-up cost of a food truck pales in comparison to that of a restaurant, according to George Hendry, an industry expert and professor at the University of South Carolina’s School of Hotel, Restaurant and Tourism Management.

“When you open up a restaurant from going to a food truck, you're increasing your expenses,” Hendry said, “A food truck is just the opposite. You can put down about 50 grand and get yourself on the road, opening a restaurant, you probably have to have, you know, close to a quarter million just to get yourself up and running.”

The lower cost of a food truck often entices those who may have less experience or money, but still want to try their hand in the restaurant industry — that’s how Sarant got involved and it’s how the Paulks and the Adams got involved.

Sarant had worked as a private chef in the past and Todd Adams had been in the restaurant industry most of his life, at times as a head chef, but never as an owner. Meanwhile, Paulk's youngest daughter really liked donuts.

Food trucks and tents have also been the catalyst for Matt Shannon’s small business, Boba Bros, which he started around two years ago at Soda City while he was bartending at 929 Kitchen & Bar and attending the University of South Carolina.

Shannon’s success at the market encouraged his boss and 929’s owner, Sean Kim, to let Shannon and his girlfriend, Deanne Manuela, open up a small cafe inside of MOA Korean BBQ, Kim’s new restaurant on Main Street.

“(Kim) saw that our Boba Bros stuff went really well for two years. And that we were trying to look for more brick and mortar, but for a whole year and a half, it wasn't working out,” Shannon said, “Then he decided to open the new restaurant, and we had a conversation like, ‘Oh, your desserts and everything worked really well with us so it kind of just worked out the best for both parties.”

As for the future of the food truck industry, and the clear food truck to brick and mortar pipeline, owners like the Paulks, and experts like Hendry see expansion for the industry that has made jumpstarting a new eatery easier than ever.

“I see nice steady growth, there's plenty of opportunities for everybody to have a little piece of the action out there,” Hendry said.