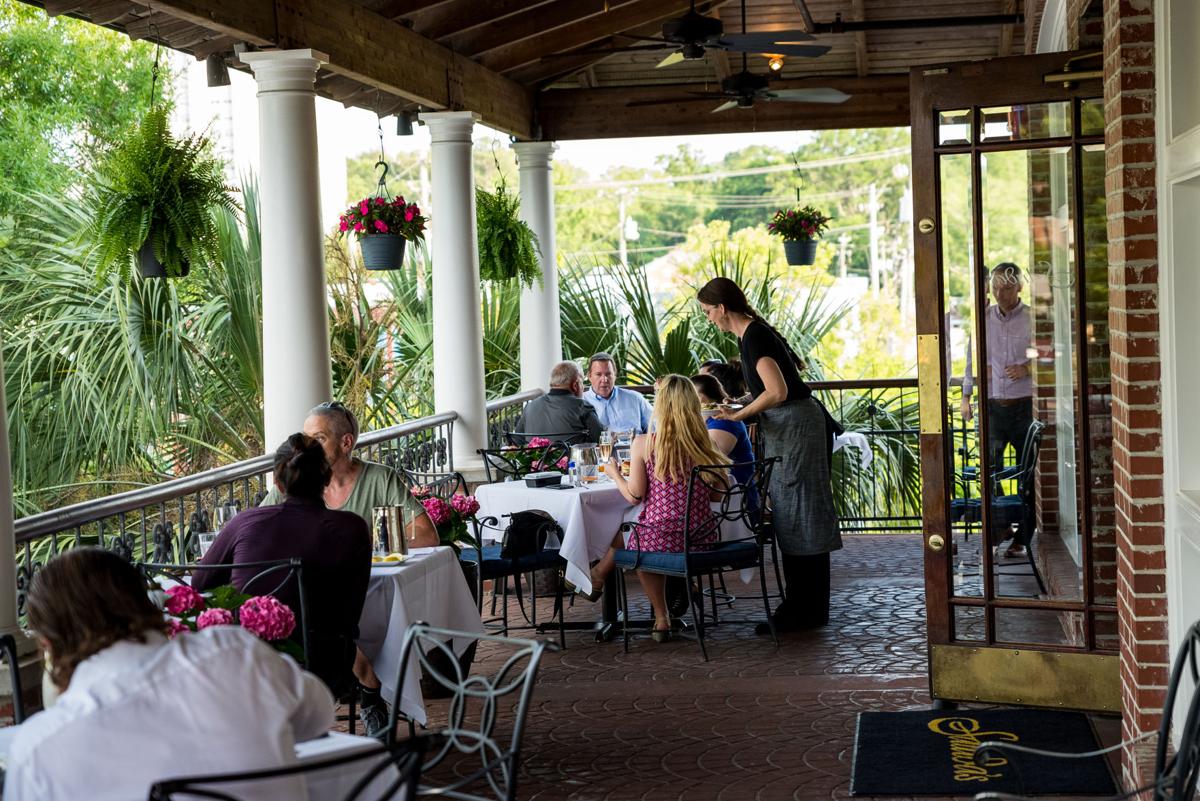 Outdoor dining at Saluda’s on May 5. 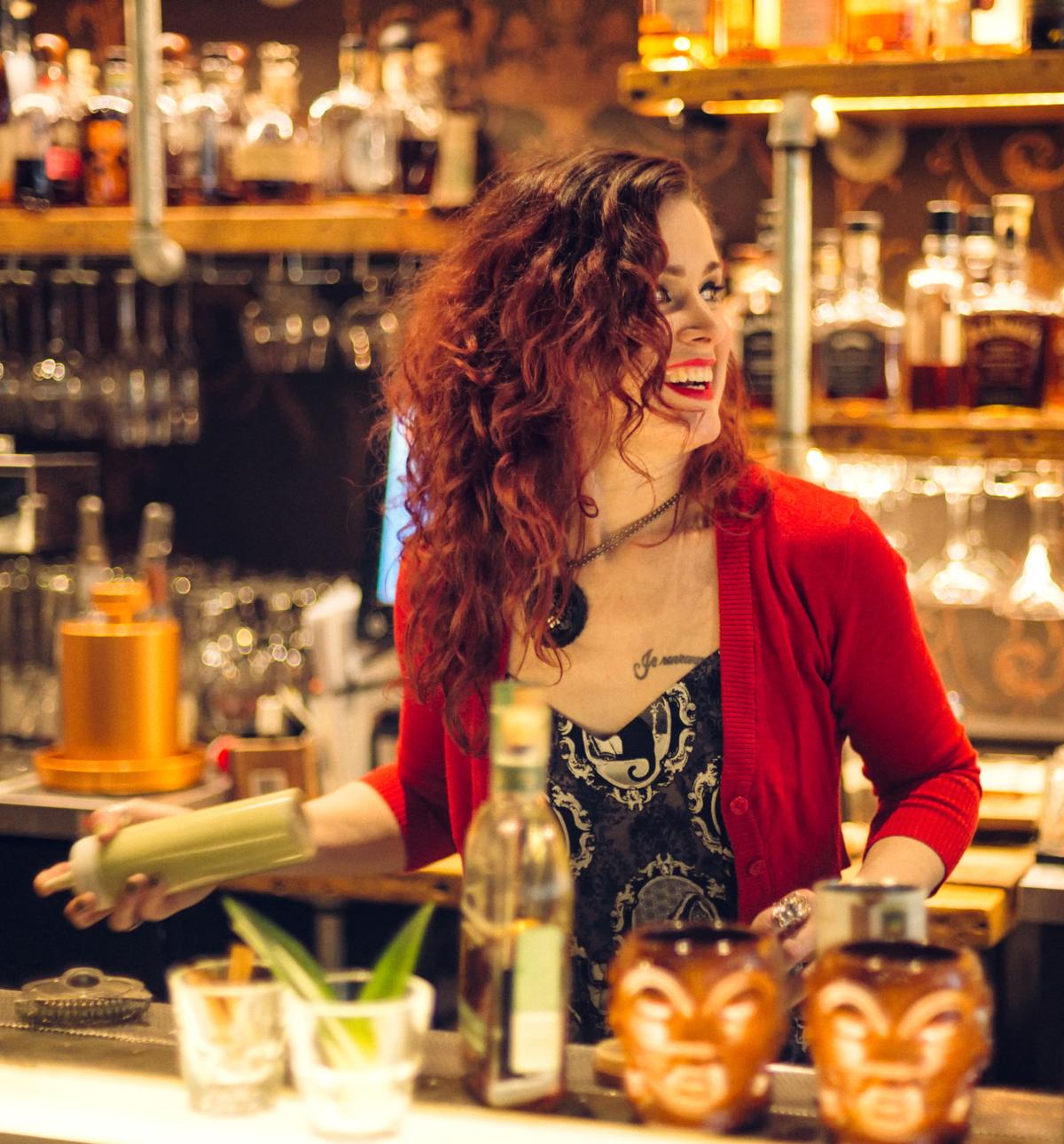 During the ongoing COVID-19 pandemic, even the most lauded professionals in the local restaurant community have felt the impact.

Take Kat Hunter, the popular and well regarded bartender at Bourbon, who has won competitions on her own and helped lead the Main Street cocktail hub to be regarded as one of the South’s best whiskey bars (as it was hailed in 2017, 2019 and 2020 by The Bourbon Review).

With the bar closed from March through September, she found herself in a tenuous position. During the hiatus, she even applied for other jobs away from the cocktails scene.

“I wondered what the industry was going to look like,” she said. “I was frightened for everyone in the industry and I just wondered if it was a sign for me if I needed to switch.”

Hunter recalled applying for unemployment and helping her coworkers do the same, noting the “fear in their voices.” Ultimately, Hunter didn’t leave, and neither did many of the restaurant's employees, said co-owner Eric Duncan.

“There’s an art about it,” she said of the pull that kept her in craft bartending. “There’s beauty in it.”

Her fear and uncertainty is justified, and far from uncommon.

At the onset of the ongoing COVID-19 pandemic, warnings arose that a third of America’s restaurants could close. What remained after may never look the same, other predictions said.

Bite of the Week: Recovery Bowl at Columbia's Kairos Mediterranean

Hundreds of thousands of food and drink workers have lost their jobs — including another 372,000 in December, per a report from the U.S. Bureau of Labor Statistics.

But as with Bourbon, turnover remains less common at independent upscale and fine dining establishments.

Though hampered by the present pandemic, these businesses offer competitive wages, a chance to work at a place that can credibly stake a claim as being “the best” at something, and greater flexibility as far as scheduling and hours.

“People are working for more than a paycheck in these organizations,” said University of South Carolina hospitality professor Drew Martin, who co-authored a study on the variables of long term employee retention in fine dining restaurants in 2019. “That’s really ideal. Because, if there’s more than a financial incentive to stay with a job, people are really tied up in the success of the business.”

According to statistics cited in that study, the hospitality industry overall averages 73 percent turnover — 50 percent higher than all other private sectors — but that figure drops to 25 percent turnover rate in fine dining with typical employees working there six years, higher than the national average for any industry.

The pandemic has done little to change this in Columbia. Even with the dire projections and almost no offered incentives to stick around, local fine dining owners shared that they returned the bulk of their staffs upon reopening.

At Vista’s mainstay upscale restaurant Motor Supply Co. Bistro, owner Eddie Wales said that the majority of his full-time staff returned. Most of his employee losses stemmed from those with health concerns, he explained.

“I’m really proud of my core group of managers and staff that stuck with us the whole time,” he said, citing the work culture at the restaurant. “These are people that were with us when we did three weeks of takeout only … Everyone who wanted to come back came back.”

Wales didn’t offer any incentives to keep his employees during the restaurant’s roughly eight week closure, but that did little to deter server Mike Blizzard, who has been at Motor Supply for almost six years. As a longtime server and bartender in various types of places, from moderate upscale restaurants to college bars and dives, he originally viewed his move to Motor as making the most career sense.

When he was laid off during the COVID-19 pandemic, he put little thought towards leaving — though he admitted his once stalwart faith in the longevity of the industry was shaken. Blizzard said Wales assured the employees the business’ future was stable, as was his position. A 401k program continued to be a draw, too.

“I knew I was one of the core people there,” he said. “[The thought of leaving] never really crossed my mind.”

Why would he leave, he reasoned. Blizzard said he has numerous regulars who specifically request him, and he has a genuine attachment to the job. And when he did return, Wales had a small bonus waiting for those who came back.

“When it's good it's good. It can be very satisfying seeing people out for the night and having a good time and laughing,” Blizzard explained. “I feel fortunate I get to be involved in people’s happiness.”

USC professor Martin’s study looked at two upscale Columbia restaurants — Blue Marlin and Villa Tronco — for its findings. It cautions it has a small sample size, but the findings were still striking.

He and his coauthors interviewed several long-tenured employees to find overlaps in why they stayed so long.

“People felt like they were compensated fairly. There were other variables that were also important besides the compensation,” Martin explained, noting flexibility on the part of managers, with employees given free reign to try new things. “I guess they just felt like the way they were treated was really critical.

“People really felt like they were part of something big and important. That instilled some pride in the job.”

Many employees who participated in the study said they would only leave for a job with a significant pay bump or to pursue their “dream job.” Even then, they said they wouldn't leave outright, but would transition to part time, wanting to remain a part of the workplace, Martin explained.

“More primary was how the job fit into their overall lifestyle. There was some security, I guess,” he said. “They felt secure in their relationships with the (owners) and they looked at this relationship as kind of a two-way street, where they were mutually supporting each other for the greater good.”

Ensuring that a core group of employees sticks around is paramount in fine dining, explained Steve Cook, owner of the swank Five Points restaurant Saluda’s. He pointed to the establishment’s chef and five-person kitchen staff as an example: Lose that core, and you’re left having to build a whole new team without compromising the restaurant’s identity or level of quality.

“Having a static staff that stays together is everything. That’s the sort of fine edge that I think you have to walk, or it can fall quickly,” he explained. “With COVID that’s why it was so important to bring these folks back.”

Cook kept his restaurant’s managers on payroll through the restaurant’s roughly seven-week to-go-only phase before it resumed outdoor dining in May, and gave his employees a raise upon their return, he said. Still, he was uncertain how things would shake out with getting employees to come back.

“Basically my thought process was, nobody knew what the hell was going to happen, how long it was going to last,” he said.

But it worked out: Only three employees didn’t return upon Saluda’s reopening, Cook reported.

Bourbon didn’t incentivize employees to stick around, instead focusing on helping them get on unemployment. Duncan, the co-owner, said that was to ensure the long term financial viability of the business and thus their jobs.

He feels that has been done, and he noted that the people that have moved on did so to switch careers.

Like many, Duncan feels the pandemic has shaken the industry and altered its long-term outlook. As part of that, he believes that long-brewing changes like a raise in the federal minimum wage are more sure to come, making the service industry more appealing for workers when COVID-19 is in the rearview.

“You’ll have more careers in the industry moving forward,” he concluded. “I think you’re going to get more retention and more serious people in the industry.”