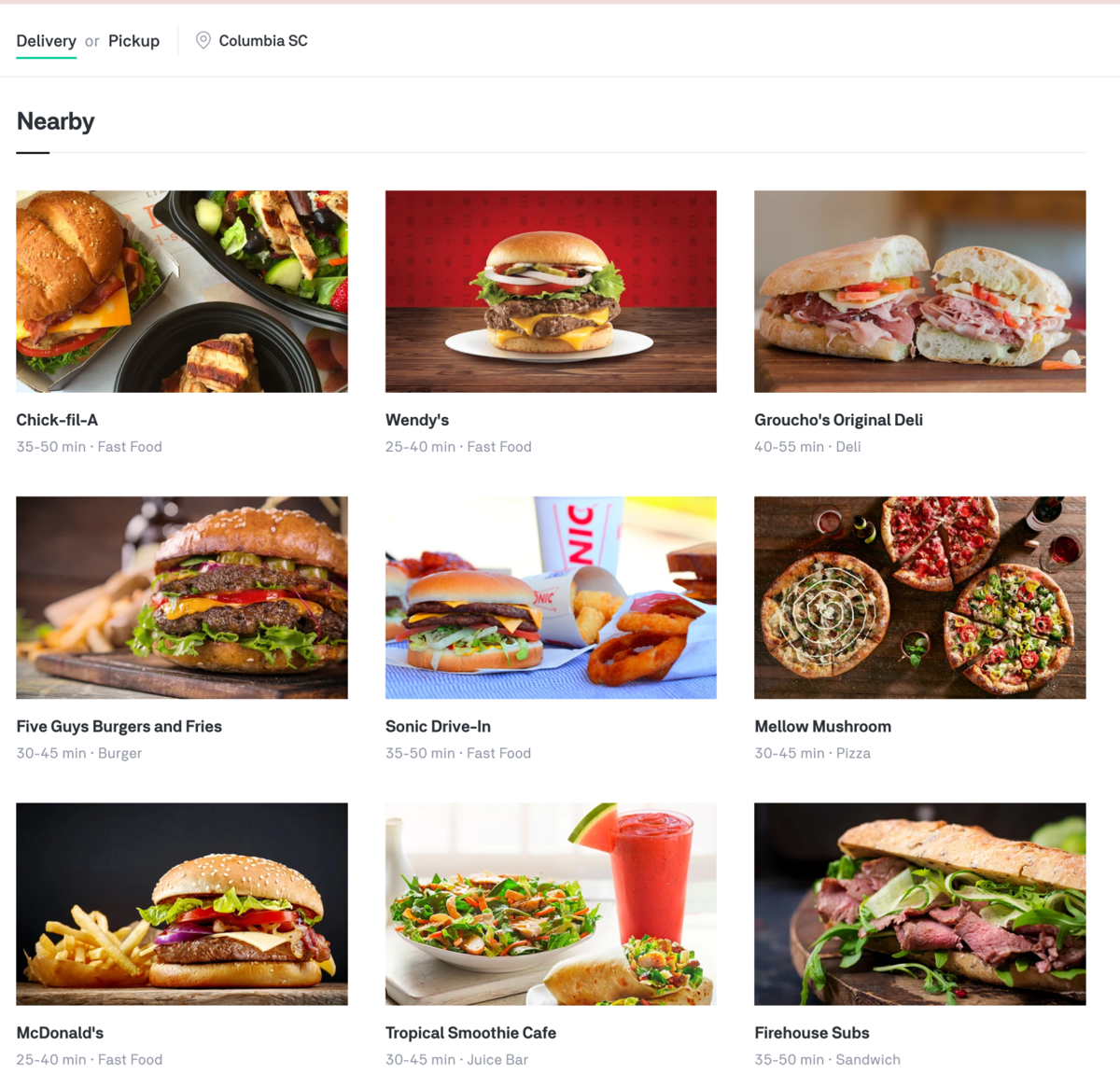 A screenshot of a food delivery app 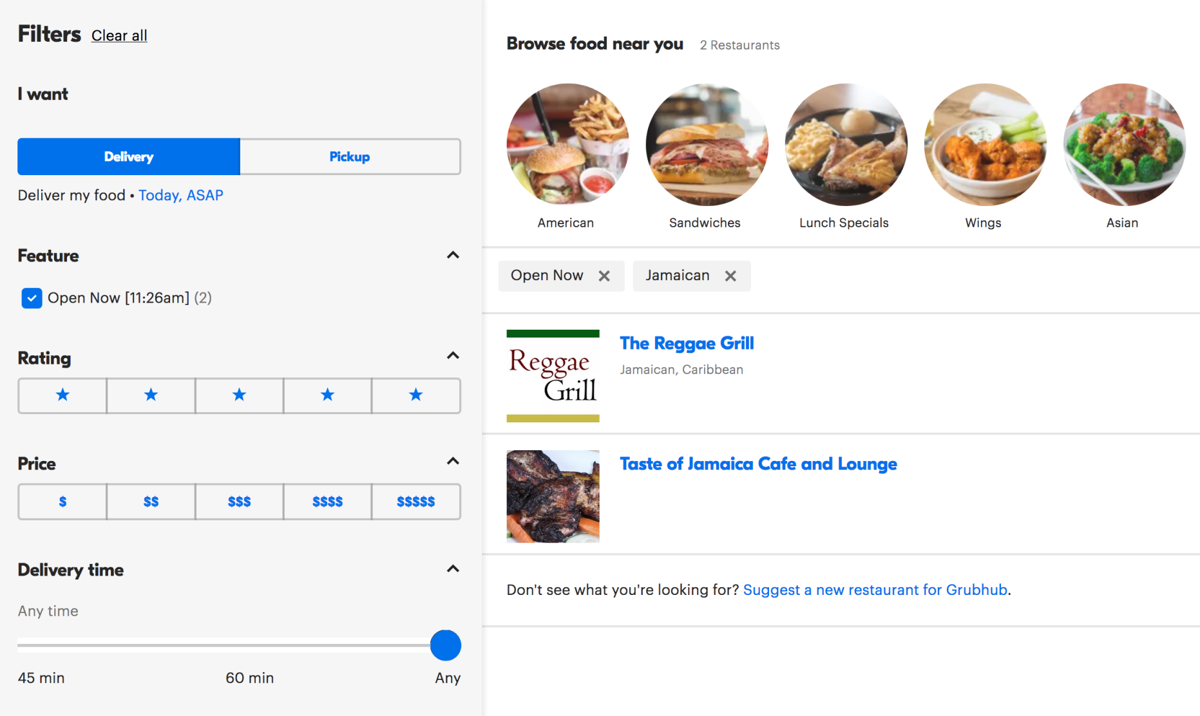 A screenshot of a food delivery app

It’s raining. Or perhaps the baby has a fever and the idea of cooking or going out is insurmountable, if not impossible. You may not drive, or hey, maybe you’re just feeling lazy tonight. Whatever reason you have for not wanting to prepare your own food or leave the house to obtain it, the third-party delivery services in Columbia are not here to judge — just to bring you food that goes beyond typical pizza or Chinese delivery fare.

Third-party delivery services in Columbia started with 256-TOGO, which was acquired by BiteSquad, a national company, in 2017. From there, more have entered the Columbia market: UberEats, GrubHub, Postmates, DoorDash, and Let’s Drive. With a huge college student base, and plenty of suburbs within less than a 10-mile drive from the city center, it’s no wonder delivery companies are banking on Columbia being a prime market for their services.

Liz Sniegocki of BiteSquad provided numbers that show that almost 30 percent of millennials order food or beverages through a delivery app each week, and that the industry is projected to be worth $365 billion by 2030.

Orders typically begin online, where a customer chooses a service or uses the service’s app that’s downloaded onto their smartphone. From there the customer selects what items they want from which restaurant (only one restaurant can be chosen per order), and the restaurant accepts the order and begins to prepare it. The delivery service will then dispatch a driver to arrive at the restaurant as the food is ready, where the driver then checks the food for accuracy and delivers it to the customer. Order progress can be tracked on some apps, like BiteSquad’s, so the food can be tracked via GPS until it arrives at its destination.

With three parties involved in the process of getting food from the restaurant kitchen to a customer’s mouth, there are bound to be issues along the way. Julie Ford, owner of Blue Cactus Café, has had her share of mishaps with these services.

“Drivers are generally OK, but if they’re running late, they’ll tell the customers the issue is with us,” she says.

She’s even had to become a deliveryperson herself.

“Twice I’ve had to make the deliveries because the customer will call about their food, and one driver didn’t even show up until after we closed, so I personally ran it out.”

Other restaurants are firmly against to-go or delivery orders of any kind. Chef Pierce Bowers of Lula Drake says that he totally opposes such services.

“I work too hard to throw food in a box that turns to crap one minute later,” Bowers says. However, he adds, “Restaurants are nothing more than a business, so you can never rule out food delivery completely.”

Sam Suaudom, co-owner of Baan Sawan, an upscale Thai restaurant just outside Five Points, says that they started out not offering any take-out because they felt the Baan Sawan experience couldn’t be summed up in a clamshell take-out container. These days, they offer limited take-out, but no third-party delivery. He says they are concerned about delivery taking away from the attention to their seated customers.

“The kitchen is just my parents and my brother cooking maybe 95 percent of everything from scratch, and the floor is usually only two people and myself,” he says.

Suaudom says that the delivery orders can create a bottleneck in the kitchen, which can extend the wait time for seated diners in a dining room that doesn’t look hectic.

“We stress that we know other restaurants are better equipped to participate, so understand that our decision not to is in no way a commentary on other restaurants’ decision to work with these services,” Suaudom says.

Restaurants that do participate in delivery services like the opportunity to get their menu out in front of customers who may not normally order from them, suggests Blue Cactus’ Ford. And regular customers appreciate the option to get freshly made Korean food delivered to their homes if they aren’t able to come into the Five Points eatery. It takes some preparation and thinking ahead to be ready for delivery orders, though. Ford says that she currently doesn’t have any menu items that she won’t prepare for delivery, but is planning to add new items that may not travel so well.

Wondering what people in Columbia are getting brought to their homes? In Columbia, Smashburger, Pot Smoker’s BBQ and M Vista (especially their spring rolls) are the most popular orders from BiteSquad, as are chicken nuggets from McDonald’s, because there’s no accounting for taste when it comes to what people need when they need it. It seems like despite the problems that may exist with getting food from third-party delivery services, the trend continues to grow and shows no signs of stopping.