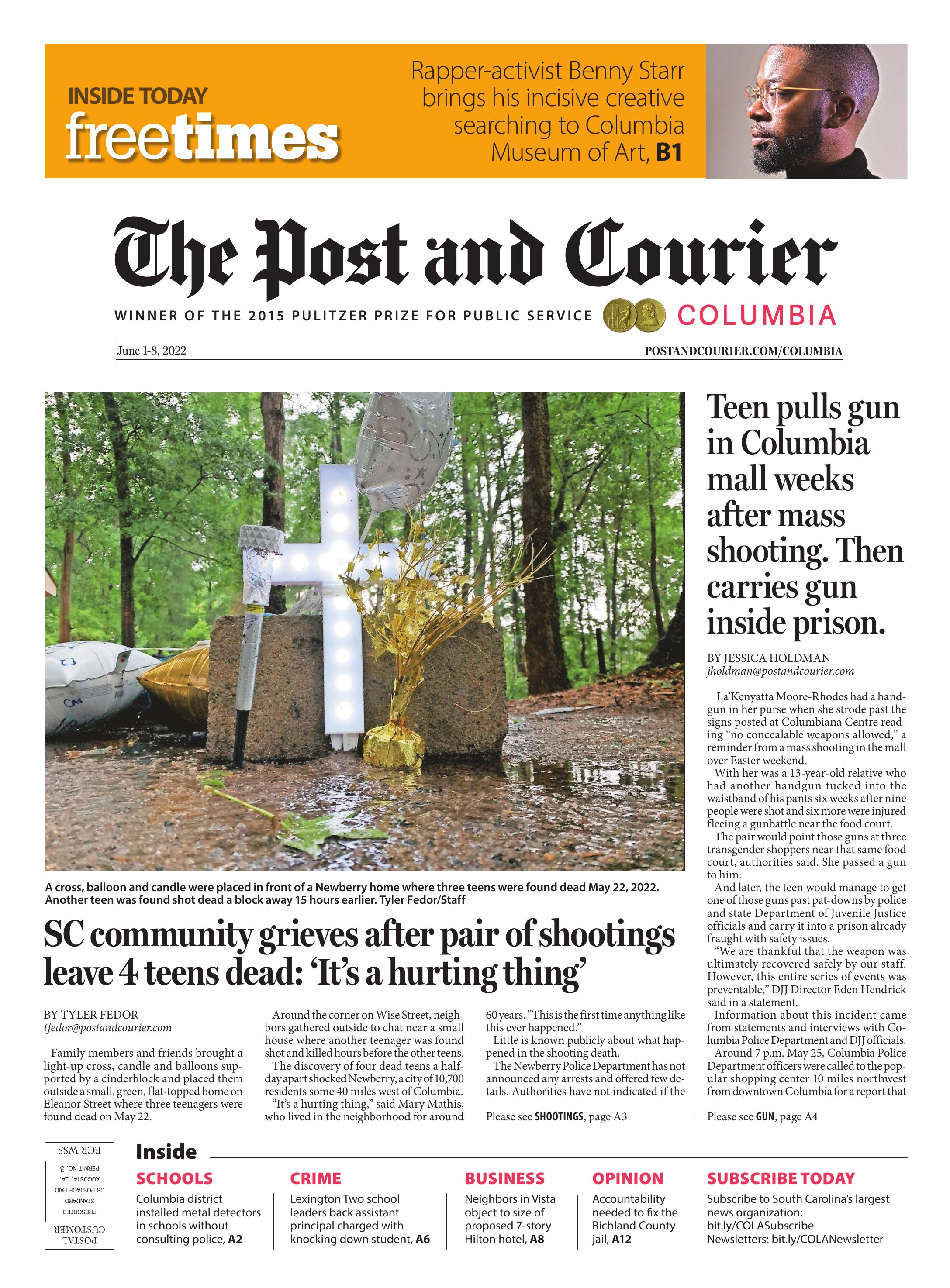 A cross, balloon and candle were placed in front of a Newberry home where three teens were found dead May 22, 2022. Another teen was found shot dead a block away 15 hours earlier. Tyler Fedor/Staff

NEWBERRY — Family members and friends brought a light-up cross, candle and balloons supported by a cinderblock and placed them outside a small, green, flat-topped home on Eleanor Street where three teenagers were found dead on May 22.

Around the corner on Wise Street, neighbors gathered outside to chat near a small house where another teenager was found shot and killed hours before the other teens.

The discovery of four dead teens a half-day apart shocked Newberry, a city of 10,700 residents some 40 miles west of Columbia.

“It’s a hurting thing,” said Mary Mathis, who lived in the neighborhood for around 60 years. “This is the first time anything like this ever happened.”

Little is known publicly about what happened in the shooting death.

The Newberry Police Department has not announced any arrests and offered few details. Authorities have not indicated if the killings are tied together except that the four teens knew each other.

Police declined to share incident reports even though they are required for release under state law.

Police Chief Kevin Goodman told reporters he was in disbelief over the killings.

"We're losing our young people at an alarming rate, and some things have got to change," he said. “To the young people of Newberry, understand this. We love you. I love you. And I want nothing but the best for you. I’m here for you, and we have to do better.”

Police responded to a call soon after midnight May 22 to find Mykain Davis, 16, shot and killed on Wise Street. Around 3 p.m. the same day, police found Jahquindon Toland, 18, Thisere Robinson, 15, and Sonterrious Davis, 19, shot and killed on Eleanor Street. The shootings took place within a block of each other.

Goodman has described all four of the dead teenagers only as “associates” who knew each other but has not shared any connection with their deaths.

The three teens found on Eleanor Street were “around in the neighborhood every day together,” according to Tabasha Bookman, who was Toland's cousin.

“It was very unexpected,” Bookman said.

A man who said he was the grandfather of one of the victims said he intended to meet his grandson the day he was found dead. While leaning against the chain-link fence of a house at the end of Wise Street and standing with neighbors, the man who declined to share his name to reporters waved at friends driving past.

As the day went on, the community, including an older sister of one of the victims carrying a poster with pictures and names of the victims, walked to the balloons at the end of Eleanor Street.

Mathis and Treka Douglas, who lived in the neighborhood for around 40 years, described the community as close-knit, even family. Mathis said she’d seen children grow up and even help other families raise their children. Douglas said they watched out for one another's kids.

“Everybody on this block is family," Douglas said. "The tragic thing that happened with these babies? It’s family. We’re not friends, we’re family." 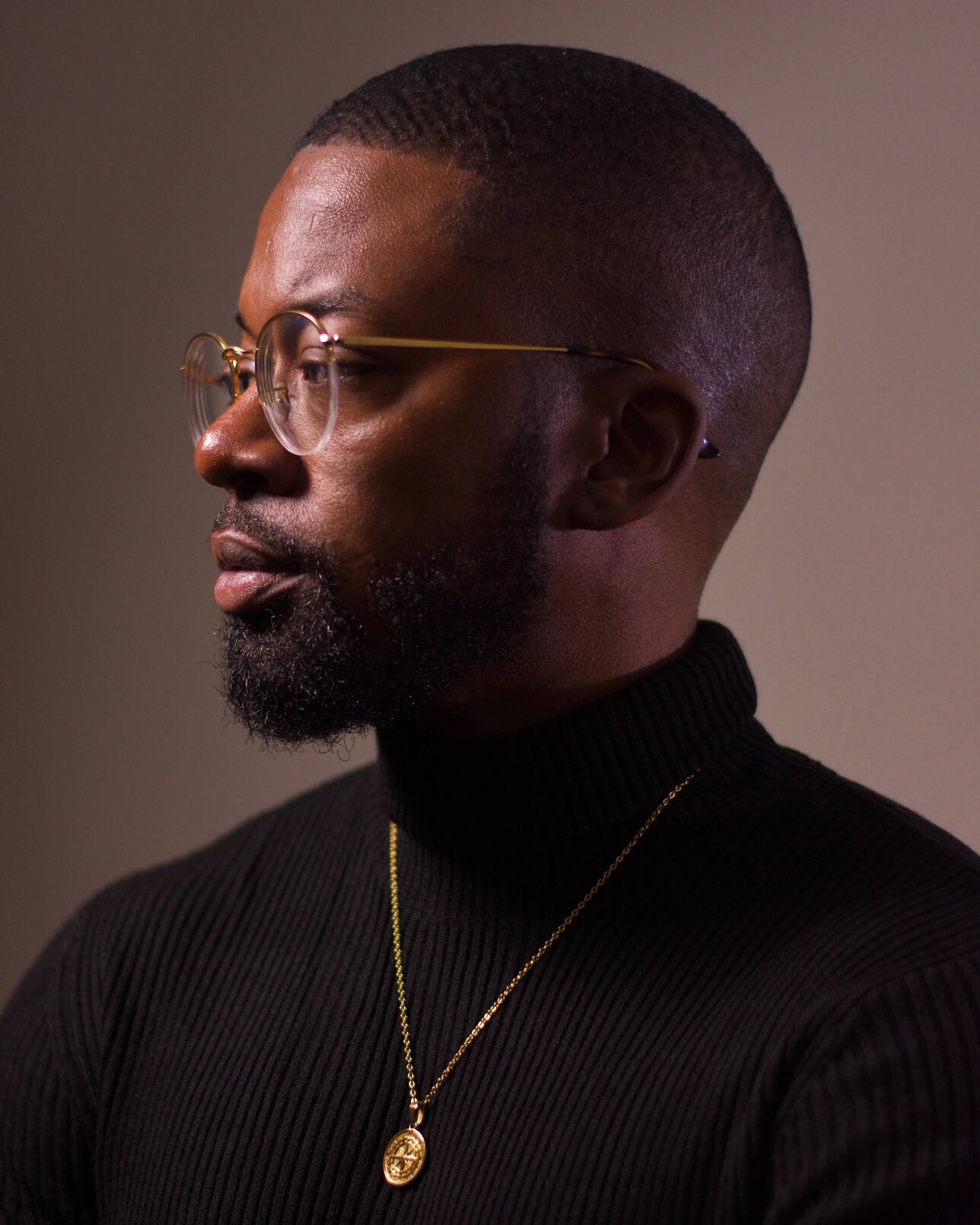 Benny Starr is performing at the Columbia Museum of Art on June 2. Joseph Johnson/Provided

A sign in Columbiana Centre reminds visitors of its no-weapons policy. A month after a shootout took place at the mall, police responded to another gun incident May 25. Mike Fitts/Staff

COLUMBIA — La’Kenyatta Moore-Rhodes had a handgun in her purse when she strode past the signs posted at Columbiana Centre reading "no concealable weapons allowed," a reminder from a mass shooting in the mall over Easter weekend.

With her was a 13-year-old relative who had another handgun tucked into the waistband of his pants six weeks after nine people were shot and six more were injured fleeing a gunbattle near the food court.

The pair would point those guns at three transgender shoppers near that same food court, authorities said. She passed a gun to him.

And later, the teen would manage to get one of those guns past pat-downs by police and state Department of Juvenile Justice officials and carry it into a prison already fraught with safety issues.

"We are thankful that the weapon was ultimately recovered safely by our staff. However, this entire series of events was preventable," DJJ Director Eden Hendrick said in a statement.

Information about this incident came from statements and interviews with Columbia Police Department and DJJ officials.

Around 7 p.m. May 25, Columbia Police Department officers were called to the popular shopping center 10 miles northwest from downtown Columbia for a report that two people were pointing guns at patrons.

While the shooting at Columbiana Centre made national news, life in the mall quickly looked the same as before.

Moore-Rhodes, 40, was walking through the Columbiana Mall with relatives when she encountered a group of three people who police said identify as transgender.

Moore-Rhodes is accused of starting an argument with the three people, calling them derogatory gender-related slurs.

During the argument, Moore-Rhodes allegedly pulled out the loaded handgun she carried in her purse and pointed it at the group, police said. The 13-year-old boy with her allegedly lifted his shirt, revealing a second gun.

Police said surveillance video showed Moore-Rhodes, who was out on bond on earlier assault and weapons charges, handed her gun to the teen, who also pointed it at the group.

Since the Easter weekend shootout among three men in the midst a large crowd of shoppers, the mall had hired private security and a dog trained to sniff out firearms. A mall spokeswoman did not respond to questions about whether the dog or extra security was on site the evening of May 25.

How the Columbia mall mass shooting unfolded over Easter weekend

The spray of gunfire in a crowded mall raised questions of how such a thing could happen inside a place that most would considered safe from such danger.

The teen, whose name was not released because he's a juvenile, was arrested and searched about 30 minutes later, with police finding a 9mm handgun on him.

Officers would somehow miss the second gun though.

"This lack of a thorough search is unacceptable and risked public and officer safety," Chief Ship Holbrook said in a statement.

The department is conducting an internal investigation and the arresting officers have been placed on administrative duty until they can be retrained in search and handcuffing procedures.

The procedural failures would not end there.

After officers took the teen to the DJJ detention center on Broad River Road, corrections officers patted down the teen.

He then showered and dressed in facility clothes before the gun was discovered, Hendrick said in a statement.

A DJJ spokesman did not answer questions about how the teen got through intake with a gun or how officers learned he possessed a gun inside the facility.

DJJ officials were able to retrieve the weapon without incident. It is unclear whether the confiscated gun was the one the teen had carried in the mall or the one handed to him by his relative.

Hendrick, who was appointed to the DJJ's top post in February amid upheaval at the agency, said the Columbia facility is changing its intake process and retraining will take place. The staff directly involved were suspended while the agency investigates.

Meanwhile, the teen faces juvenile offenses for possessing a firearm, unlawful carry and pointing and presenting a firearm.

The woman, Moore-Rhodes, faces pointing and presenting a firearm, a felony which carries a sentence of up to five years in prison; unlawful carry; and contributing to the delinquency of a minor. She does not have a South Carolina concealed weapons permit. She's also charged with violating city of Columbia gun laws and its hate speech ordinance.

Moore-Rhodes was already out of jail on bond for a pair of other felony charges in Richland County from March — assault and battery and possession of a weapon during a violent crime, which together carry a sentence of up to 25 years if convicted. Her lawyer did not respond to calls from The Post and Courier.

The incident also presents another black eye for the embattled state agency charged with housing and rehabilitating juvenile offenders that has seen the resignation of two consecutive directors following years of understaffing and violence.

Civil rights groups, at the end of April, filed suit against DJJ over the safety, mental health and education of children in state custody. The federal lawsuit came less than two weeks after the agency signed a settlement agreement with federal regulators to make changes at its main detention center in Columbia following an investigation that found civil rights violations.

The lawsuits both said children were forced to spend days or weeks in isolation for minor offenses and the agency failed to get treatment for children who threatened self-harm.

In the Columbia prison that houses just over 100 juveniles, 99 injuries were reported in 11 months, according to a February 2020 report from the federal Department of Justice’s Civil Rights Division.

Findings included an officer intervening in a fight by putting a teen in a chokehold and an officer failing to do anything while a teen was repeatedly attacked in his pod over three hours. There also was a riot in February 2016 that resulted in reports of attempted sexual assault, attempted murder with an effort to run someone over in a car, and arson when toilet paper was set on fire.

As of April 3, the agency said nearly 60 percent of officer positions at the Columbia facility are vacant. To help with recruitment, the recently confirmed director is asking for $1.7 million to boost starting salaries and raises. She is also overhauling the facility's security camera system.

As part of the federal settlement, Hendrick signed an agreement to enact changes in officer training, restraining techniques, using isolation as punishment and how to respond to fights between teenagers. The civil rights groups filed another lawsuit seeking better conditions at four other facilities across the state.