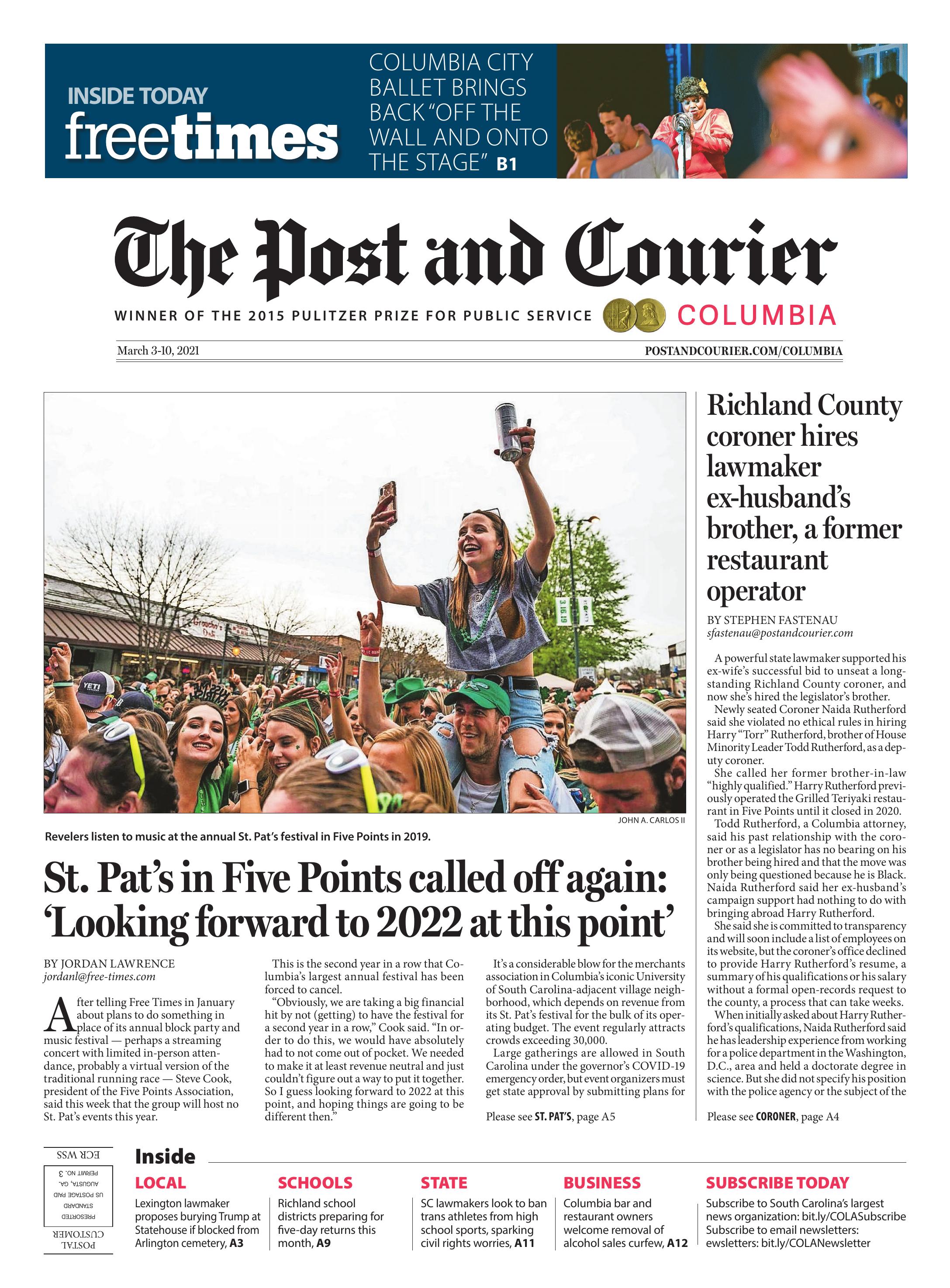 Revelers listen to music at the annual St. Pat’s festival in Five Points in 2019.

Pretty much every prominent event has canceled plans, adjusted plans, and then canceled them again during the course of the COVID-19 pandemic. So St. Pat’s in Five Points can find some solace in the fact that they are not alone.

After telling Free Times in January about plans to do something in place of its annual block party and music festival — perhaps a streaming concert with limited in-person attendance, probably a virtual version of the traditional running race — Steve Cook, president of the Five Points Association, said this week that the group will host no St. Pat’s events this year.

This is the second year in a row that Columbia's largest annual festival has been forced to cancel.

“Obviously, we are taking a big financial hit by not (getting) to have the festival for a second year in a row,” Cook said. “In order to do this, we would have absolutely had to not come out of pocket. We needed to make it at least revenue neutral and just couldn’t figure out a way to put it together. So I guess looking forward to 2022 at this point, and hoping things are going to be different then.”

It’s a considerable blow for the merchants association in Columbia’s iconic University of South Carolina-adjacent village neighborhood, which depends on revenue from its St. Pat’s festival for the bulk of its operating budget. The event regularly attracts crowds exceeding 30,000.

More bars in Columbia's Five Points are facing legal fights over their liquor licenses as neighbors — and sometimes USC — object.

Large gatherings are allowed in South Carolina under the governor's COVID-19 emergency order, but event organizers must get state approval by submitting plans for promoting social distancing and public safety.

"In the interest of our local public health, I believe the Five Points Association made a good decision," said Columbia City Councilman Will Brennan, whose district includes Five Points. "The city is committed to working with the merchants for successful future St Pat's festivals."

Last year, the festival was set to take place just as COVID-19 began to shut down Columbia. The association was forced to pull the plug just 10 days before the event, set to be headlined by Mount Pleasant indie rock favorite Band of Horses.

Always filling much of its lineup with local talent, St. Pat's is a coveted gig among area musicians, an opportunity to play before a large crowd that is amped on beer and the big touring bands to come later in the day. Those larger acts have included Dashboard Confessional, SUSTO, Superchunk, and St. Paul and the Broken Bones in recent years.

Like many other groups, the Five Points Association also faced a drastic cut to its funding from of the City of Columbia's hospitality tax, Cook explained, referring to the money that supports a variety of arts and events-focused organizations.

“Nobody ever expected to have not only no festival, but then also have your hospitality dollars that have been consistent for years and years cut as well," he said. "We’re feeling it from all sides right now. It’s hard to say, ‘Woe is me,’ too much, with everybody feeling the pain.”

Cook also said that the neighborhood’s reputation for irresponsible behavior, regardless of how deserved it is, was a factor in the decision to sit out 2021.

“We want to be responsible parts of the community, and Five Points gets a bad rap — all you have to do is flip on Facebook or whatever, and people like to shoot a lot of arrows at us,” he posited. “It’s certainly something that was not a small part of our consideration. We don’t really want to push the envelope here.”

Trae Judy, owner of Five Points live music club The White Mule, booked the lineup for the aborted 2020 event. He doesn’t feel that St. Pat’s getting canceled for a second year in a row puts the event or Columbia’s overall entertainment landscape at any more of a disadvantage than any other festival or any other city. The pandemic is the pandemic everywhere, he reasoned.

“Every single festival in America is shut down,” Judy offered. “If we were the only event shut down, obviously there would be a lot more reasoning and etc. Everyone is at the same playing field. So we didn’t go up or go down. It just is what it is.”

In neighboring Cayce and West Columbia, the latter of which is home to the almost finished Savage Craft Ale Works, the promise of something big is in place. 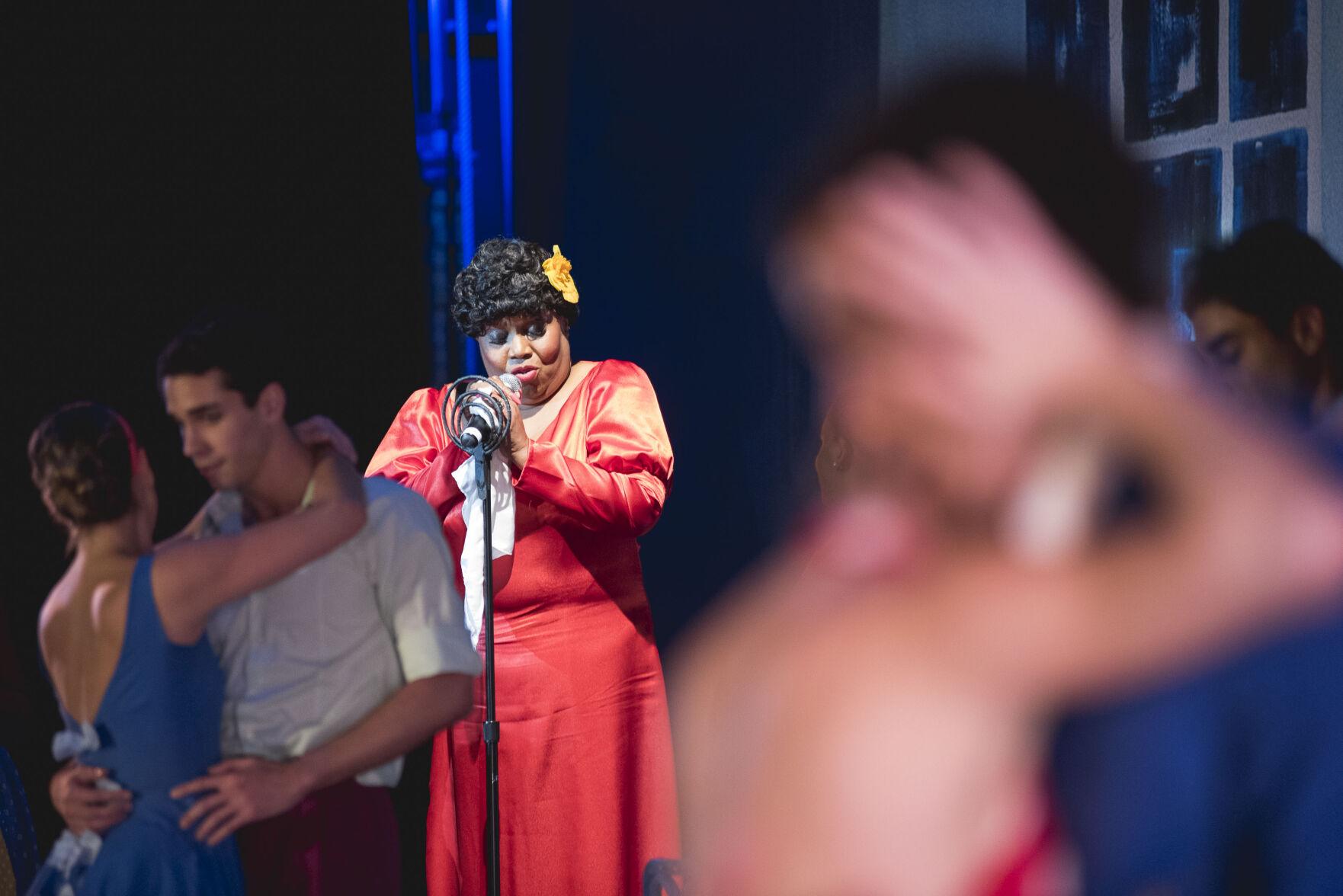 "Off the Wall and Onto the Stage" returns to the Koger Center this week. Provided

She called her former brother-in-law "highly qualified." Harry Rutherford previously operated the Grilled Teriyaki restaurant in Five Points until it closed in 2020.

Todd Rutherford, a Columbia attorney, said his past relationship with the coroner or as a legislator has no bearing on his brother being hired and that the move was only being questioned because he is Black. Naida Rutherford said her ex-husband's campaign support had nothing to do with bringing abroad Harry Rutherford.

It was well into Wednesday morning before the unofficial final results were tallied in the Richland County election primary, which was marred by poll worker shortages, hourslong lines at combined precincts and reports of incorrect ballots.

She said she is committed to transparency and will soon include a list of employees on its website, but the coroner's office declined to provide Harry Rutherford's resume, a summary of his qualifications or his salary without a formal open-records request to the county, a process that can take weeks.

When initially asked about Harry Rutherford's qualifications, Naida Rutherford said he has leadership experience from working for a police department in the Washington, D.C., area and held a doctorate degree in science. But she did not specify his position with the police agency or the subject of the degree or where it was obtained.

Her office referred further questions about his work history to the pending records request.

Hours after Post and Courier Columbia first posted its article online, Naida Rutherford directed a reporter to a video posted to her office’s Facebook page on Feb. 15 in which she interviews Harry Rutherford and he says he attended Howard University and while he was in school was a police reservist in Washington, D.C. He also notes he then earned a doctor of chiropractic degree from Life University in Marietta, Ga., and later returned to South Carolina to care for his mother.

Harry Rutherford investigates death scenes while being on call at all times, Naida Rutherford said. His title of deputy coroner is the same one held by much of the staff of 32 in the coroner's office.

A candidate for deputy coroner requires only an associate's degree, Naida Rutherford said. While state law outlines education and training requirements for coroners, there are so such guidelines for deputy coroners.

"I needed people who could do the job and do it well," Naida Rutherford said. "To be a deputy coroner is a difficult task and not everybody can stomach that. We had several people that submitted applications and wanted to work here in the office, and we were able to bring on an amazingly diverse staff." 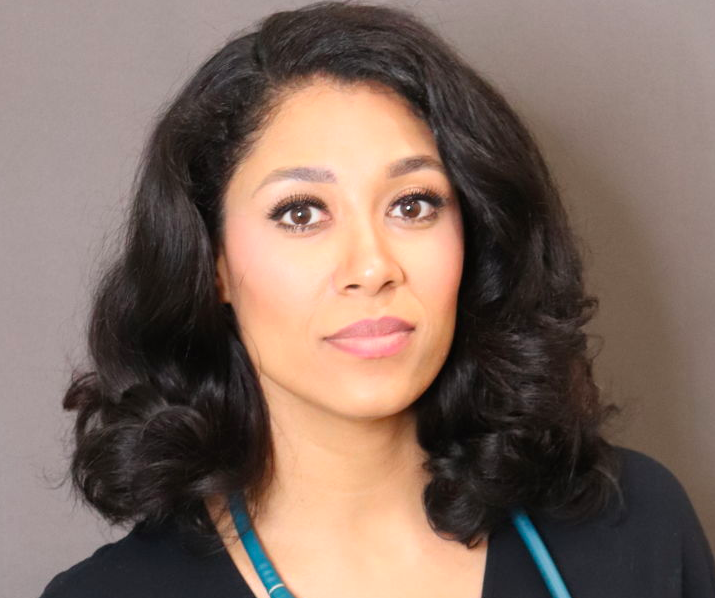 Harry Rutherford was sued on Feb. 1 by the landlord for Grilled Teriyaki, seeking $57,622 in unpaid rent dating back to June 2019, penalties and legal fees, according to court filings. Harry Rutherford has not filed a response to the complaint.

A coroner's office spokesman declined a request to speak to Harry Rutherford.

In saying his ex-wife is being targeted unfairly, Todd Rutherford said there are multiple coroners in the state who don't meet updated education requirements for the position as laid out by state law and examples of officials' family members in favorable positions throughout state and local governments who aren't scrutinized because they are White.

"The fact that I've been in legislative office 23 years should not stop my family members from wanting to give back nor get in public service for doing whatever it is they want to do," Todd Rutherford said.

For South Carolina's coroners, proposal would gut list of qualifications they have worked to build

Are you 21? A high school graduate? Not a felon? You could have what it takes to be your county's top death investigator, if a lawmaker's proposal succeeds.

Her election bid was endorsed by Todd Rutherford, the top Democrat in the House of Representatives, on his campaign website and in posts on his social media.

Naida Rutherford also endorsed her ex-husband's campaign. Todd Rutherford, who has represented his North Columbia district more than 20 years, was elected to another two-year term in November 2020.

Todd Rutherford in 2017 proposed a bill that would have only required a coroner be a high school graduate and complete a 40-hour training course, rolling back requirements that have been beefed up during the past decade. He said at the time the requirements are too limiting for an elected office and more restrictive than qualifications for president and U.S. Senate, The Post and Courier reported at the time.

Update: This story has been updated to include more information about Harry Rutherford's qualifications provided by Naida Rutherford and details of a pending legal case involving Harry Rutherford.