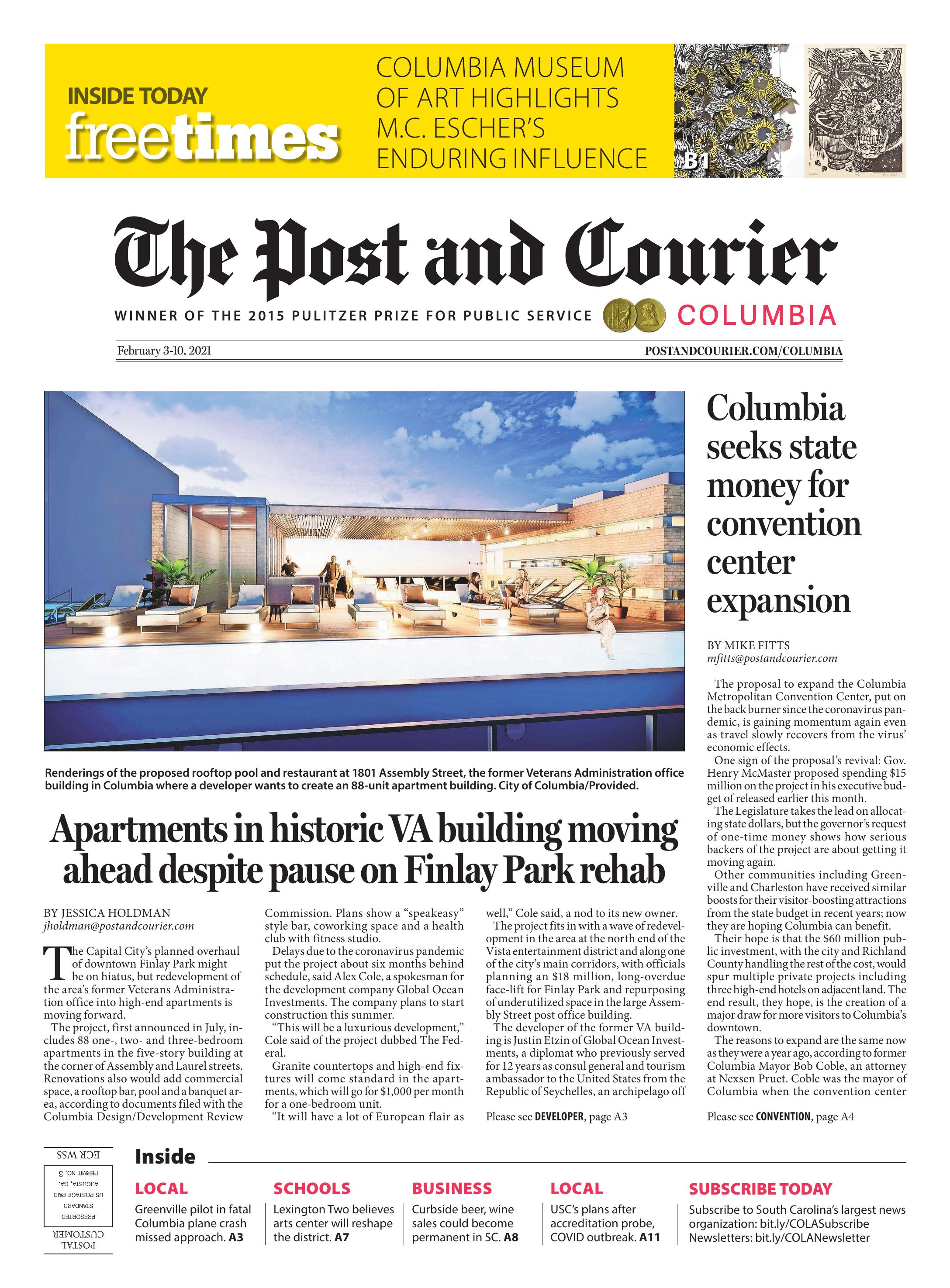 Renderings of the proposed rooftop pool and restaurant at 1801 Assembly Street, the former Veterans Administration office building in Columbia where a developer wants to create an 88-unit apartment building. City of Columbia/Provided

COLUMBIA — The Capital City's planned overhaul of downtown Finlay Park might be on hiatus, but redevelopment of the area's former Veterans Administration office into high-end apartments is moving forward.

The project, first announced in July, includes 88 one-, two- and three-bedroom apartments in the five-story building at the corner of Assembly and Laurel streets. Renovations also would add commercial space, a rooftop bar, pool and a banquet area, according to documents filed with the Columbia Design/Development Review Commission. Plans show a "speakeasy" style bar, coworking space and a health club with fitness studio.

Delays due to the coronavirus pandemic put the project about six months behind schedule, said Alex Cole, a spokesman for the development company Global Ocean Investments. The company plans to start construction this summer.

A building in downtown Columbia that served for almost 60 years as a National Guard armory is slated to be converted into the Armory Hotel.

"This will be a luxurious development," Cole said of the project dubbed The Federal.

Granite countertops and high-end fixtures will come standard in the apartments, which will go for $1,000 per month for a one-bedroom unit.

"It will have a lot of European flair as well," Cole said, a nod to its new owner.

The project fits in with a wave of redevelopment in the area at the north end of the Vista entertainment district and along one of the city's main corridors, with officials planning an $18 million, long-overdue face-lift for Finlay Park and repurposing of underutilized space in the large Assembly Street post office building.

The developer of the former VA building is Justin Etzin of Global Ocean Investments, a diplomat who previously served for 12 years as consul general and tourism ambassador to the United States from the Republic of Seychelles, an archipelago off the coast of East Africa.

He's best known for design and development of Altitude London, a collection of venues, including The View Studios, The River Room and The MillBank Media Centre, in the 387 foot-high Millbank Tower skyscraper in central London, according to the investment tracking website Crunchbase. 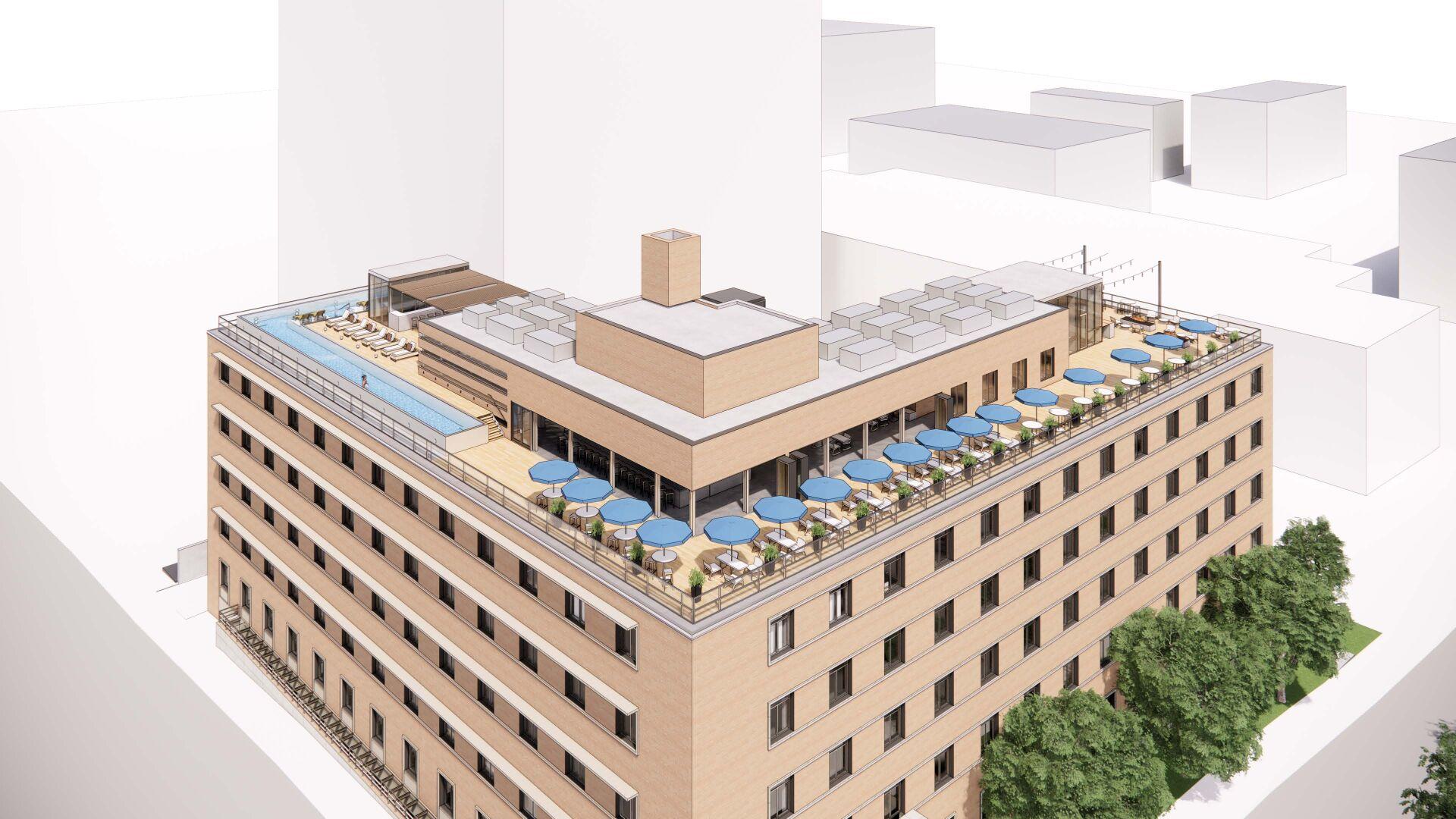 Renderings of the proposed redevelopment of 1801 Assembly Street, the former Veterans Administration office building in Columbia where a developer wants to create an 88-unit apartment building. City of Columbia/Provided

The redevelopment of 1801 Assembly St. will be the Etzin's first project in the United States, Cole said, though the company is also considering another property in Minnesota.

Cole said Global Ocean Investments does have some concern over the delayed revival of Finlay Park.

Once the "crown jewel" of the city park system, the park has fallen into disrepair. Its iconic spiral fountain in need of repairs hasn't run in years and it has become a gathering spot for the city's homeless population.

But the city has pitched an $18 million redevelopment of the park, reshaping the pond and waterways, restoring the fountain, building bridges and adding a splashpad. Officials also have said they plan to partner with Charlotte-based U.S. National Whitewater Center to bring in amenities such as a possible rock-climbing wall, yoga studios, retail and restaurants. A new  building along Taylor Street would house these features.

Whitewater has said it is still interested in picking up where things left off once the economy recovers, according to Jesse Hyde, the organization's strategic director.

City Councilman Howard Duvall also said plans for a hotel near Gadsen Street are still on the table.

Redevelopment of the park is what drew Global Ocean Investments to the apartment project.

"It’s in such a unique location and presides over the area, being at the top of The Vista," Cole said, along with being surround by such prominent buildings as the Governor's Mansion.

The federal government had planned to demolish the former office building to add parking after the agency moved the 400-employee office to a new site off Garners Ferry Road, The State newspaper reported in 2015. But opposition from the mayor and historic preservationists kept the structure standing.

The facade, along with the agriculture-themed sculpture featuring Clemson University benefactor Thomas Clemson at the entrance, will be preserved, Cole said. Garvin Design Group, which has led a number of other historic redevelopment projects in the city, has been contracted.

Etzin is also a proponent of environmental policy and plans to implement "green" principles, such as solar power, as much as possible.

"It’s a really exciting project for us as a company and the architects as well," Cole said.

The project has already been approved for a parking variance and zoning change, received design approval from the city and has been added to the National Register of Historic Places. Final federal approvals are expected within the next month.

Also a part of redevelopment around Finlay Park is the Assembly Street Post Office building, which was purchased by the city at the end of 2019.

As part of the sale, the city was required to honor a 17-year lease to the United States Postal Service. But the post office doesn't currently use the full space and Duvall thinks that lease could be renegotiated for less square footage before the term is up.

Columbia seeks state money for convention center expansion: 'No question that we need it'

Advocates are pushing to get the plan to expand Columbia's convention center back on the front burner.

Those talks were paused alongside the park's revamp until the city's finances rebound from the pandemic-induced recession, something Duvall believes could lag another year. The project is expected to be funded with hospitality taxes, which have been greatly reduced as restaurants were shuttered in the early days of the virus' arrival in the Palmetto State.

Duvall said council has reviewed "soft plans" for the post office space, including renting out offices to other users or moving some city offices in. There are also calls for a parking deck to be built on unused parts of the 9-acre tract.

A pedestrian bridge over Assembly, allowing bicyclists to connect between Main Street, the Vista Greenway and eventually Riverfront Park greenway, has also been discussed.

Duvall also said City Council felt it was important that it controlled the property as it prepared to make a major reinvestment in the park. That way, officials could exercise power over what goes there and protect their investment so it wouldn't fall back into disrepair again. 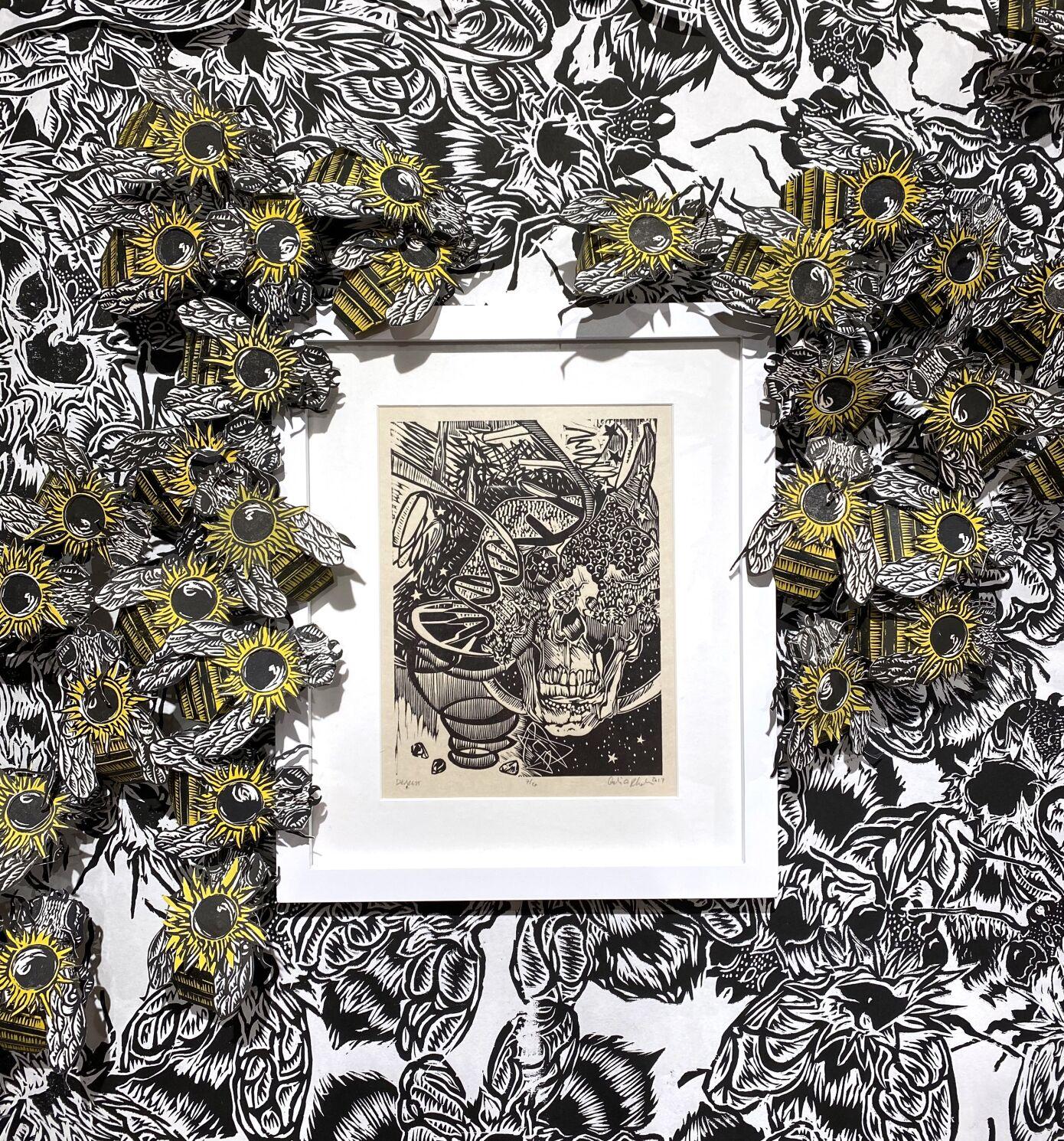 "Dearest," a woodcut by Adrian Rhodes, is included the Columbia Museum of Art's "Pressing Voices" exhibition.