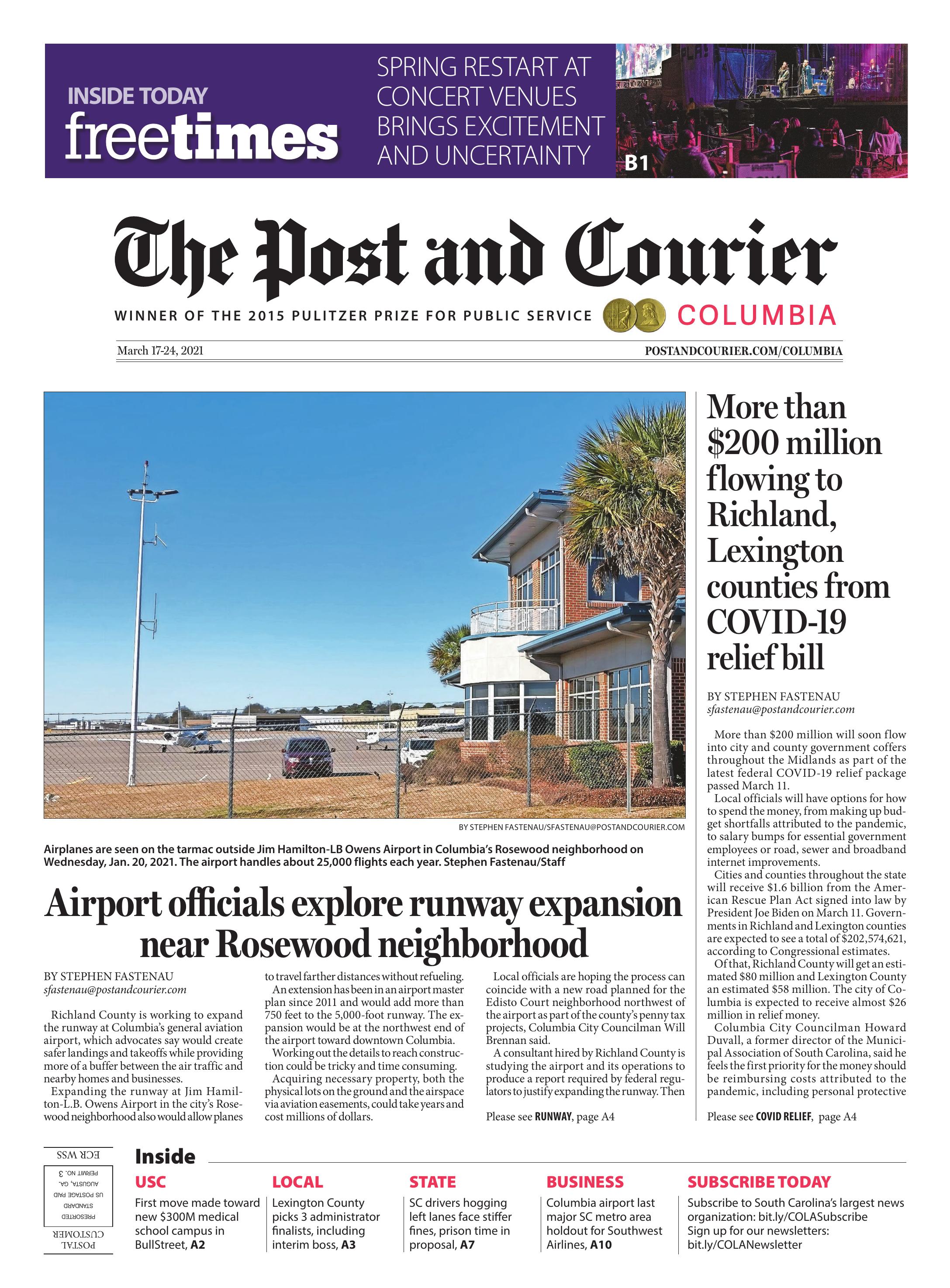 Airplanes are seen on the tarmac outside Jim Hamilton-LB Owens Airport in Columbia's Rosewood neighborhood on Wednesday, Jan. 20, 2021. The airport handles about 25,000 flights each year. Stephen Fastenau/Staff

COLUMBIA —  Richland County is working to expand the runway at Columbia's general aviation airport, which advocates say would create safer landings and takeoffs while providing more of a buffer between the air traffic and nearby homes and businesses.

Expanding the runway at Jim Hamilton-L.B. Owens Airport in the city’s Rosewood neighborhood also would allow planes to travel farther distances without refueling.

Rebecca Munnerlyn's brick bungalow on Kennedy Street is in the hands of emergency cleanup contractors hired by her insurers after the plane trying to land at nearby Jim Hamilton-LB Owens Airport glanced off her roof before exploding in the backyard just beyond her wooden deck in the unusually dense fog of Jan. 13.

An extension has been in an airport master plan since 2011 and would add more than 750 feet to the 5,000-foot runway. The expansion would be at the northwest end of the airport toward downtown Columbia.

Working out the details to reach construction could be tricky and time consuming.

Acquiring necessary property, both the physical lots on the ground and the airspace via aviation easements, could take years and cost millions of dollars.

Local officials are hoping the process can coincide with a new road planned for the Edisto Court neighborhood northwest of the airport as part of the county's penny tax projects, Columbia City Councilman Will Brennan said.

A consultant hired by Richland County is studying the airport and its operations to produce a report required by federal regulators to justify expanding the runway. Then the county will have to acquire the necessary private property and easements, and secure federal money needed to complete the work.

The process would include an environmental assessment as well as design and multiple construction phases.

"When we get hopefully the justification study completed, submitted and approved, we've still got a long way to go," airport director Chris Eversmann said.

The airport has about 25,000 flight operations each year. In addition to private pilots and corporate aircraft, the terminal is used by the University of South Carolina and Gamecocks football fans who fly in from all over the country to attend games at nearby Williams-Brice Stadium.

A pilot flying into the airport in January was killed when his plane crashed into a home several blocks away in Rosewood, which is located near downtown. The investigation is ongoing, but federal officials said in an initial report that the pilot had missed his approach in foggy conditions.

The airport is generally safe but the incident underscores the need to make the facility as safe as possible and to possibly consider an air traffic control tower at some point, said Bob Amundson, a longtime community advocate who lives in Rosewood not far from the proposed expansion.

The airfield is an economic driver for the area and improvements should be supported, he said.

"I want them to safely expand," Amundson said. "I think that a small airport is a key to economic success in cities the size of Columbia, where they don't necessarily need to or want to go into the larger Columbia (Metropolitan) airport."

Amundson was part of group to oppose plans by a developer to build 90 townhomes near the area the runway expansion is proposed. Columbia City Council rejected the project in late 2020.

If the regulatory steps fall into place and the runway project moves forward, planes could fly out of the terminal with heavier loads and more fuel that could eliminate the need for stopovers, county airport commission chairman John Parrish said.

Additional pavement will also allow pilots more time to stop, especially in wet conditions, such as landing in wet weather or needing to abort a takeoff after traveling close to 120 mph.

A plane crashed in the Rosewood neighborhood near downtown Columbia; so far no deaths have been confirmed.

The FAA will decide whether the scope of the project is warranted.

“We’re not sure we’ll get anything,” said Parrish, a pilot for the University of South Carolina.

Ideally the runway would also be widened — the 75-foot wide path is half the width of the runway at the larger Columbia Metropolitan Airport. But the airport is constrained by railroad tracks on one side and the taxiway and hangars on the other, Parrish noted.

"We would like very much for the project to move forward as expeditiously as it can, but that is very much going to be a team effort with our state and federal partners coming to the table and providing the funding," Eversmann said.

A Greenville pilot killed this month when his plane crashed into a Columbia neighborhood missed his approach after getting clearance to fly with instruments in foggy conditions, a preliminary federal report said. 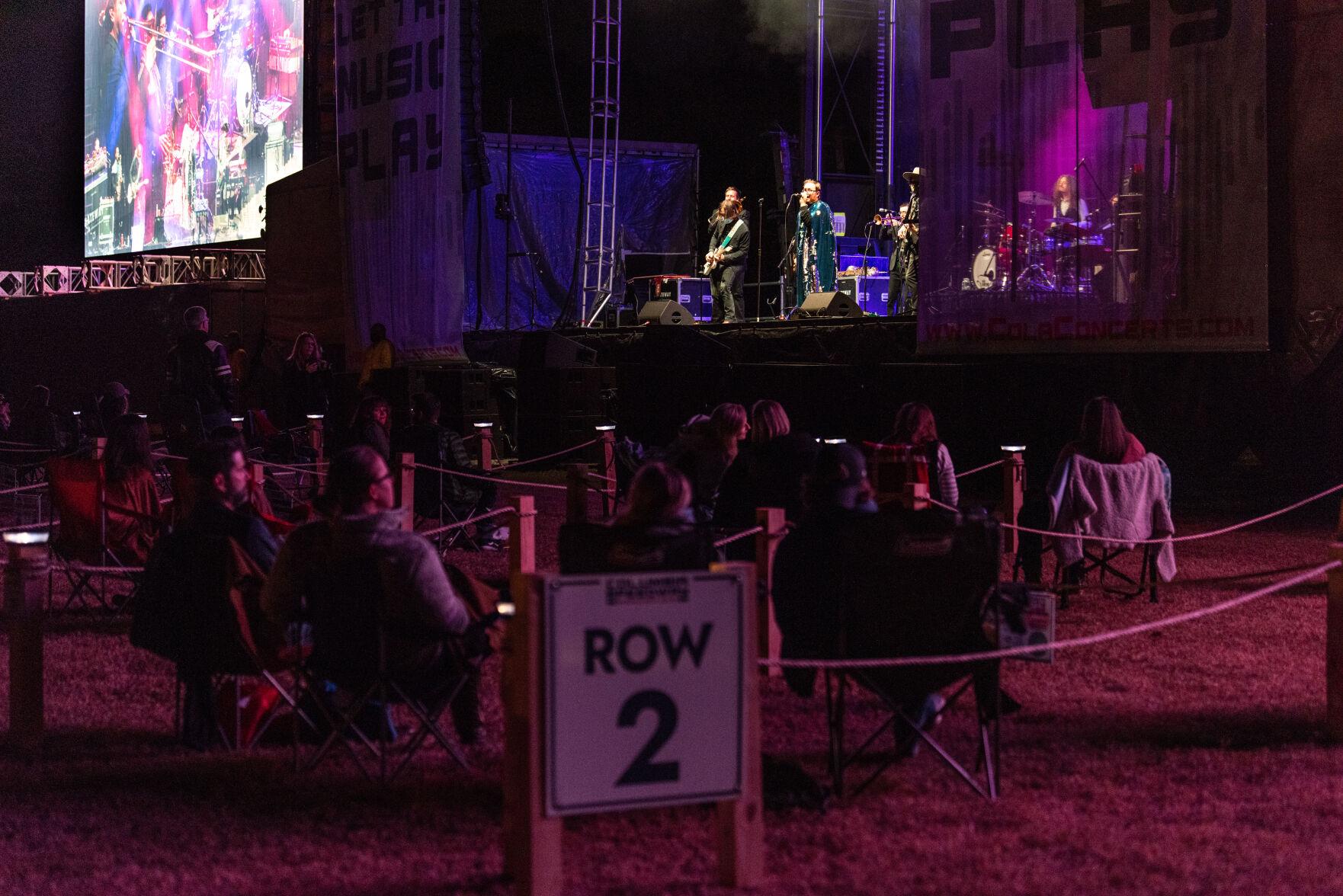 Columbia City Councilman Howard Duvall (right) ponders an issue during a 2019 council meeting. More than $200 million will soon flow into city and county government coffers in the Midlands as part of the latest federal COVID-19 relief package. John Carlos/Special to the Post and Courier

COLUMBIA — More than $200 million will soon flow into city and county government coffers throughout the Midlands as part of the latest federal COVID-19 relief package passed March 11.

Local officials will have options for how to spend the money, from making up budget shortfalls attributed to the pandemic, to salary bumps for essential government employees or road, sewer and broadband internet improvements.

Cities and counties throughout the state will receive $1.6 billion from the American Rescue Plan Act signed into law by President Joe Biden on March 11. Governments in Richland and Lexington counties are expected to see a total of $202,574,621, according to Congressional estimates.

SC cities, counties to split $1.6B in COVID relief; Greenville governments get $158M

Under the American Rescue Plan Act, Greenville County will receive an estimated $101.5 million, while the city of Greenville will get about $19.7 million. Unlike previous rounds of federal funding, the relief plan allows more flexibility in how the money is spent.

Of that, Richland County will get an estimated $80 million and Lexington County an estimated $58 million. The city of Columbia is expected to receive almost $26 million in relief money.

Columbia City Councilman Howard Duvall, a former director of the Municipal Association of South Carolina, said he feels the first priority for the money should be reimbursing costs attributed to the pandemic, including personal protective equipment purchased by the city and personnel costs. Columbia approved $6 million for small business relief in 2020 that the new federal money could pay back or be used to fund a new cycle of grants, Duvall said.

"In my book, that’s where we need to start is paying back what we've already spent," Duvall said.

Other cities and towns in Lexington and Richland counties set to receive money under the bill are:

States will receive the money within 60 days of the law being signed and then have 30 days to disburse the money owed to smaller cities.

Under the Coronavirus Aid, Relief, and Economic Security Act (CARES Act) in 2020, no cities in South Carolina received dedicated funding and Greenville County was the only county in the state to be allocated money.

Kathy Maness, a member of Lexington Town Council and president of the National League of Cities, said the organization had pushed for the latest bill to include direct money for local governments. Cities and towns throughout the country have unique needs the money can help address, she said.

In Lexington, continued growth has meant an increased need for road improvements. The town is currently footing almost the entire bill for $30 million in road projects — a fraction of the more than $250 million in identified road needs, Maness noted.

The more than $8 million in relief money could go toward those infrastructure needs, Maness said.

"We're just very excited to be able to get this money," she said. "I know that our Republican congressmen did not vote for it, I understand that. But it did pass, and so it's important that they get behind it and make sure all their cities and towns in South Carolina are able to get this money and to use it."