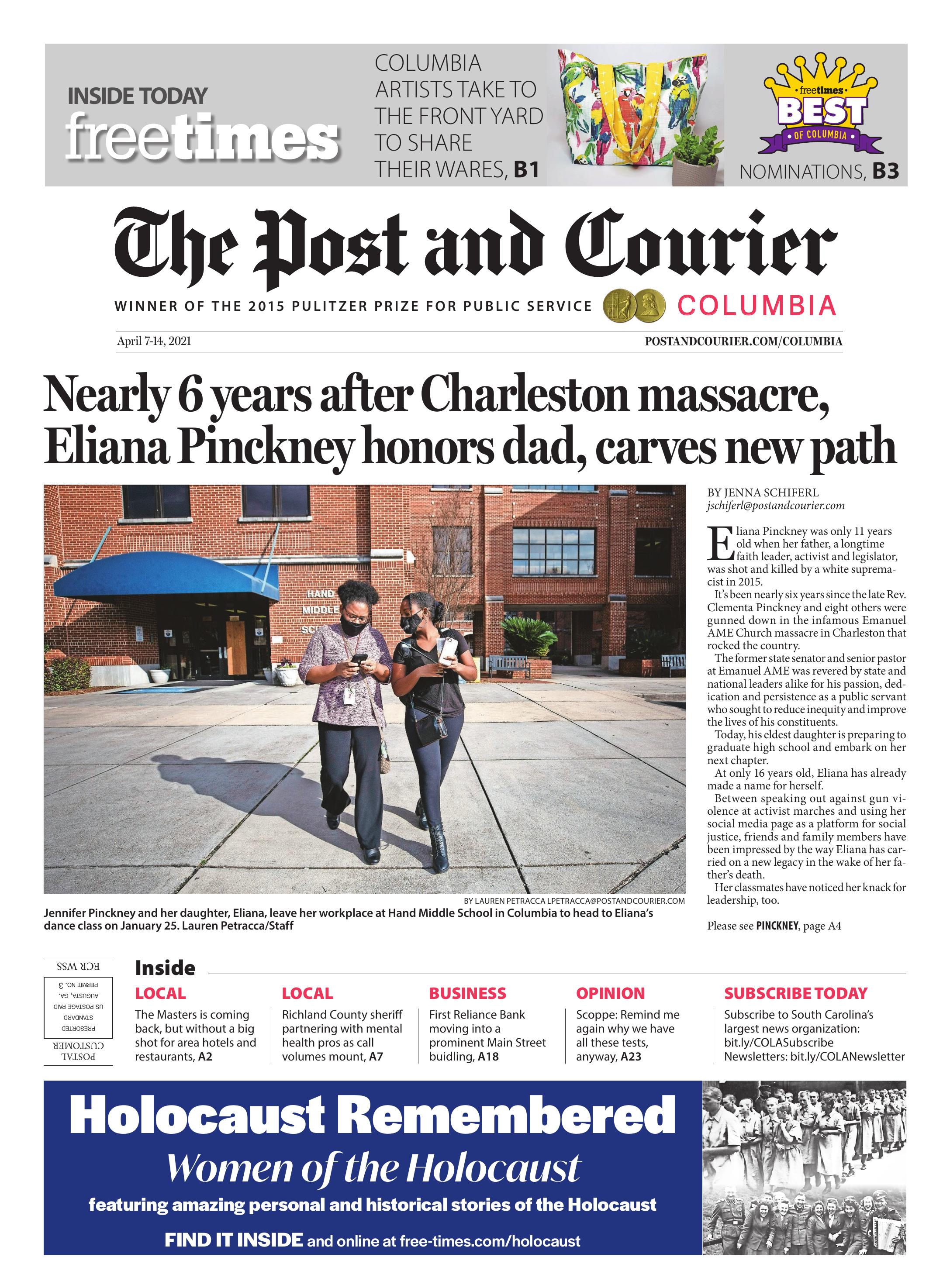 Jennifer Pinckney and her daughter, Eliana, leave her workplace at Hand Middle School in Columbia to head to Eliana’s dance class on Monday, January 25, 2021. Lauren Petracca/Staff

Eliana Pinckney, a co-captain of Dreher Dance Team, shows the rest of her team the steps to a dance at Dreher High School in Columbia on Monday, January 25, 2021. Pinckney, a senior, plans to study musical theater in college next year. Lauren Petracca/Staff

Malana and Eliana Pinckney (right) attend class virtually from a room at Hand Middle School, where their mother works as a librarian, in Columbia on Monday, Jan. 25, 2021. A proposal that would restore small annual raises for almost all teachers in South Carolina is on its way to the S.C. Senate. File/Lauren Petracca/Staff

Eliana Pinckney talks to Bruce Davis about which colleges she is leaning toward in his office at Hand Middle School in Columbia on Monday, January 25, 2021. Davis was Pinckney’s seventh grade guidance counselor at the time that her father was killed in the Emanuel AME Church massacre. He has since become her mentor and attends many of her extracurricular activities to support her. Lauren Petracca/Staff

Eliana Pinckney, 16, poses for a portrait in the hallway of Hand Middle School in Columbia on Monday, January 25, 2021. Lauren Petracca/Staff

Jennifer Pinckney is pictured with her daughters, Malana, 11, and Eliana, 16, on Monday, January 25, 2021. Lauren Petracca/Staff

Eliana Pinckney was only 11 years old when her father, a longtime faith leader, activist and legislator, was shot and killed by a white supremacist in 2015.

It’s been nearly six years since the late Rev. Clementa Pinckney and eight others were gunned down in the infamous Emanuel AME Church massacre in Charleston that rocked the country.

The former state senator and senior pastor at Emanuel AME was revered by state and national leaders alike for his passion, dedication and persistence as a public servant who sought to reduce inequity and improve the lives of his constituents.

Today, his eldest daughter is preparing to graduate high school and embark on her next chapter.

At only 16 years old, Eliana has already made a name for herself.

Between speaking out against gun violence at activist marches and using her social media page as a platform for social justice, friends and family members have been impressed by the way Eliana has carried on a new legacy in the wake of her father's death.

Her classmates have noticed her knack for leadership, too.

This fall, Eliana was elected to receive two of the most prestigious titles a high schooler can obtain: senior class president and homecoming queen.

As a lifelong lover of the arts, Eliana plans to study public relations and musical theater in college. Although she hasn’t completely ruled out a potential career in politics, she isn’t certain that she wants to follow her late father on this path quite yet.

"That's just not where my passions lie at the moment, but you know, in the years to come, maybe things will change," Eliana said.

While it’s unknown what exactly the future has in store for the young student, one thing so far is clear: Eliana may be forever surrounded by the legacy of her father, but it’s a challenge she has taken in stride.

"She is truly her father’s child," said Eliana’s mother, Jennifer Pinckney. "She doesn’t have a shy bone in her body."

Her fiery spirit, outgoing personality and knack for leadership "truly comes from her father," she added.

On the other hand, her youngest daughter, Malana, now 11, looks more like Jennifer's late husband but is more quiet and reserved like her mother.

"When I look at both girls, I see Clementa. One acts like him, one looks like him," she said. "They definitely didn’t let the tragedy get them down or the situation deter them from being the best that they can be."

Jennifer Pinckney was ecstatic in September, when, even amid the global coronavirus pandemic, Eliana "campaigned like her daddy" for the role of senior class president at Columbia’s Dreher High School and won.

Still, Eliana went into the event reminding herself that regardless of the outcome, she had "so many other things to be grateful for."

"Whether I won or not, I was very happy with where I was in my life and where I am in my life. But yeah, the crown didn't hurt," she said with a laugh.

In addition to her role on homecoming court and within student leadership, Eliana has a laundry list of accolades and accomplishments that any college-bound senior would envy.

Project chair for the National Honor Society, president of a school leadership club and co-captain of the dance team are all titles under her belt.

This summer, in the wake of national civil unrest following the deaths of George Floyd, Breonna Taylor and Ahmaud Arbery, Eliana and a group of peers organized a panel of senators, police officers, student leaders, counselors from across the state to have a conversation about civil rights, police brutality and racial injustice.

"Having that conversation was such a pivotal moment for everybody who was involved," Eliana said. "Having the opportunity and the ability to organize something like that was so moving for us, especially as people of color."

That isn’t where her activism efforts have ended.

The teenager is constantly using her social media pages to speak out against action of racism, sexism and other human rights issues.

Bruce Davis, Eliana’s seventh grade guidance counselor and mentor, describes Eliana as a genuine, caring individual with a kind heart who has never met a stranger.

"She is the ultimate giver, she will sacrifice everything she has to make sure that others have," Davis said.

Eliana loves to see people happy and in good spirits, even if it's at the expense of her own time or well-being, Davis said.

Still, he said, the student is fiercely passionate in her beliefs, no matter the subject.

"She never backs down from a challenge, even if she’s intimidated by it," he said.

"It really doesn’t matter what it is, she is going to have something to say," she said.

Growing up, Eliana was often the youngest person in her grade, thanks to her parents’ decision to enroll her in kindergarten a year before her peers.

"She’s very intelligent and mature for her age. You would never know she was younger," Davis said. "Honestly you would think she was older than her peers because a lot of times she’s the one imparting wisdom on them."

For five years, the survivors and families of those who died have traversed uniquely uneven paths through immense grief. Many have found new meaning in different, inspiring ways.

Eliana and her younger sister have likely endured more tragedy and trauma than most adults experience in a lifetime.

"I know that’s an extremely heavy burden upon them, but they continue to march forward, they continue to take life one day at a time and make the best of it," Davis said. "For me, when I’m in their presence, the problems I have pale in comparison to the experiences they’ve endured. That pushes me to continue forward. If they can, then I can too."

For as long as he's known the Pinckneys, Eliana has always had high aspirations for her future, Davis said.

"It’s going to be impossible for her to ever escape the shadow of her father but ... I want the world to know that Eliana is going to be Eliana Pinckney and not just the daughter of Sen. Pinckney," he said. "She's going to reach heights that might even be higher than what her father did."

When Clementa Pinckney first ran for the House of Representatives, his wife remembered how he doubted himself early on in the campaign.

"He came to me and said, ‘Do you think I should run?’ And I was like, ‘You’d be crazy not to. All you could do is lose, but if you don’t even try you’ll always wonder,’" she said.

Decades later, Eliana approached her mother with the same question with regard to a potential bid for senior class president.

"I found myself actually saying the same thing. If you lose at least you can say you tried but you’ll never know unless you try," she said.

While Eliana didn’t find herself actively utilizing her father’s campaign strategies while she pursued the role of senior class president, she later reflected on how the life lessons she'd learned from her dad have shaped her own path.

She wanted to make sure she was running for the right reasons: Not just because she wanted to add another title on her resume, but so that she could improve the lives of her classmates and peers.

"That is something that my dad did in church and that he did in the Senate and that he did with us," she said. "I definitely couldn’t have been where I am now without all of that advice from him."

Another life lesson she obtained from her dad: Lead with love.

"We don’t fight hate with hate, we fight hate with love. That’s just the way my parents raised me, that’s just the way that my family grew up. Those are the people I surround myself with," she said. "To be able to spread that to the rest of the world, if I could do nothing else in my life that would be the one thing that I would want people to know or the one thing I would want people to remember me by."

At the time, Charleston’s activist community was tightly knit, its backbone local black pastors, including many who lived through the civil rights movement and strongly advocated nonviolent protest. But over the five years since, the face of the city’s activists has changed. So has their mood. 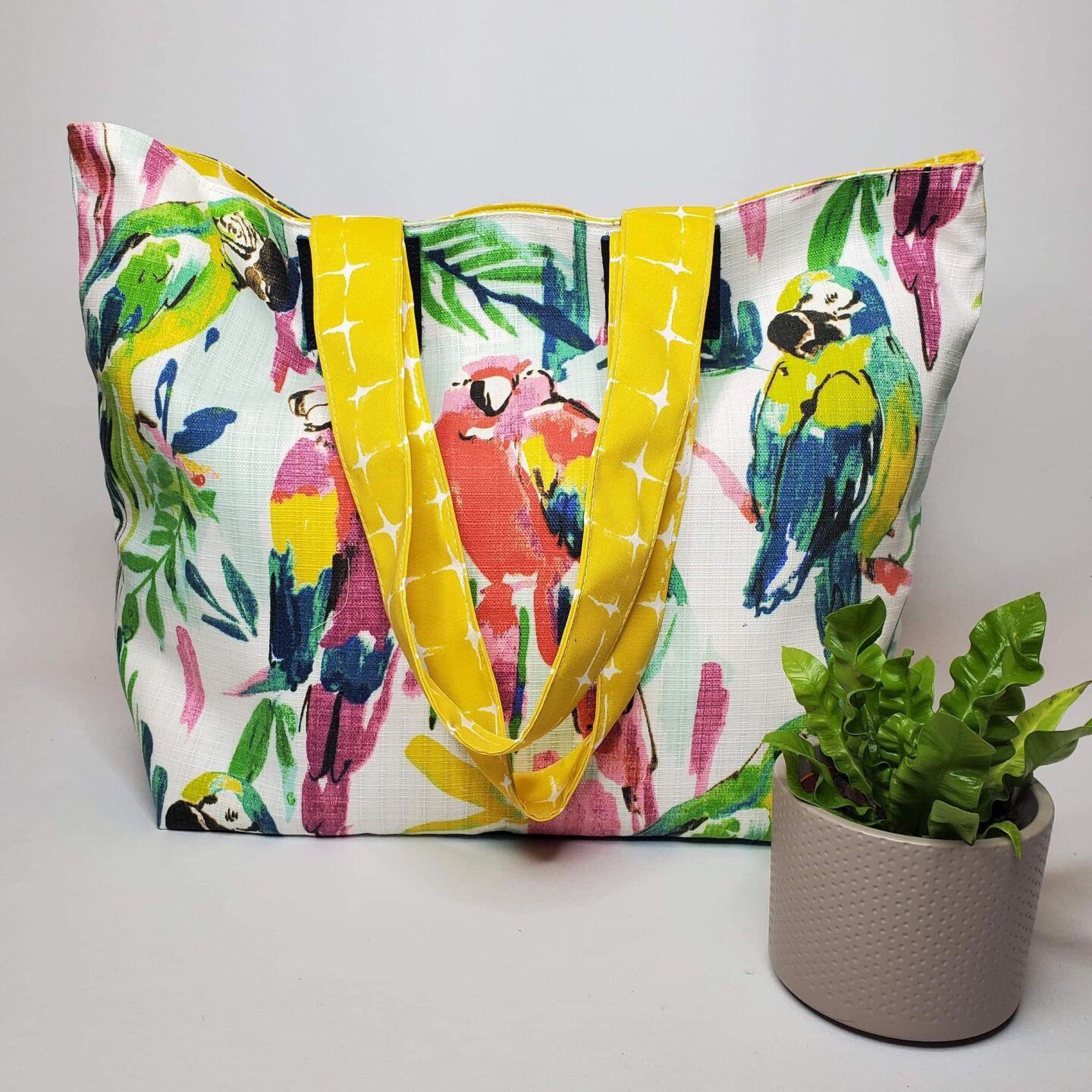 Uniquely MC handbags will be featured at Keenan Terrace Art in the Yard. Provided.