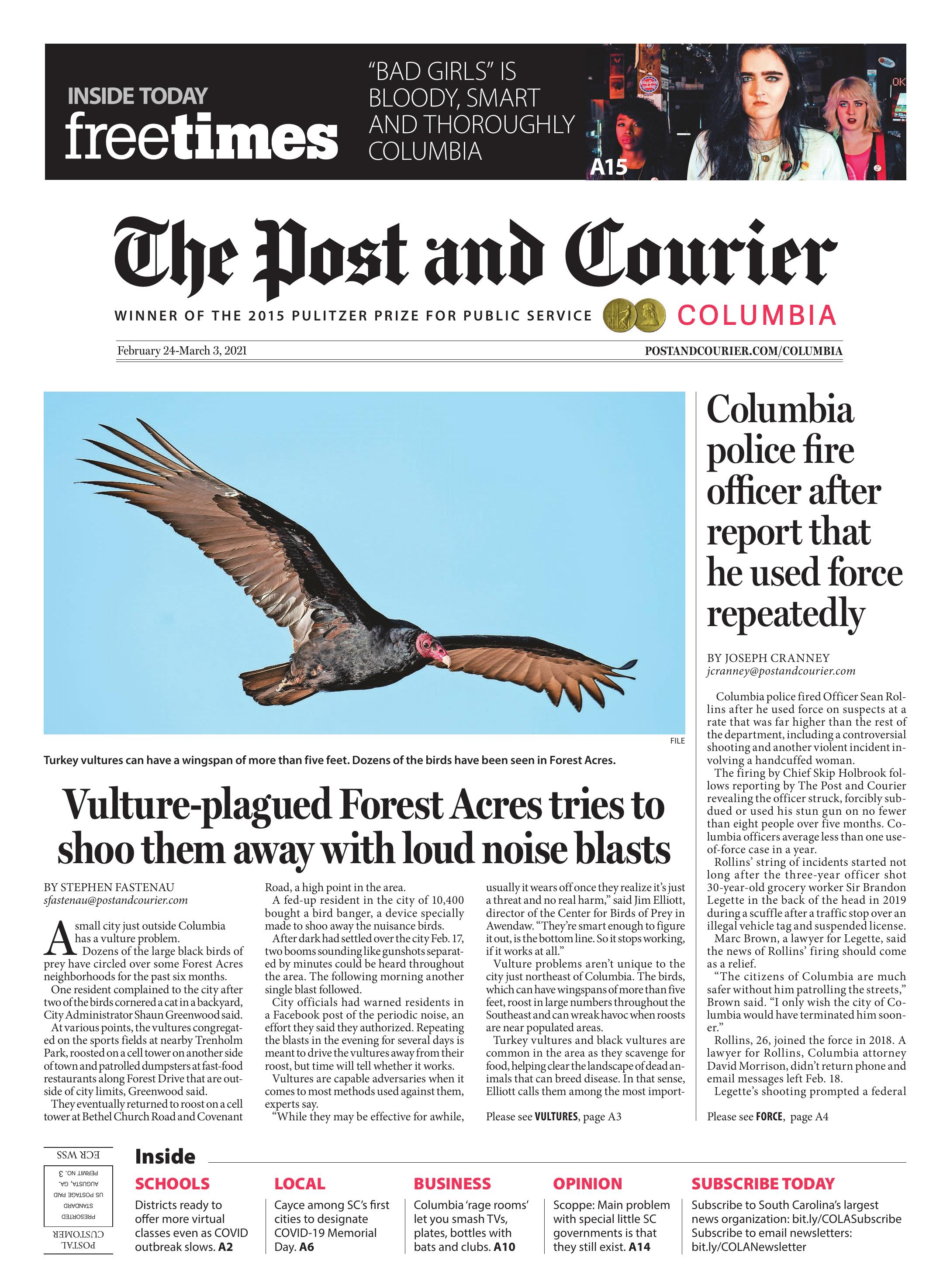 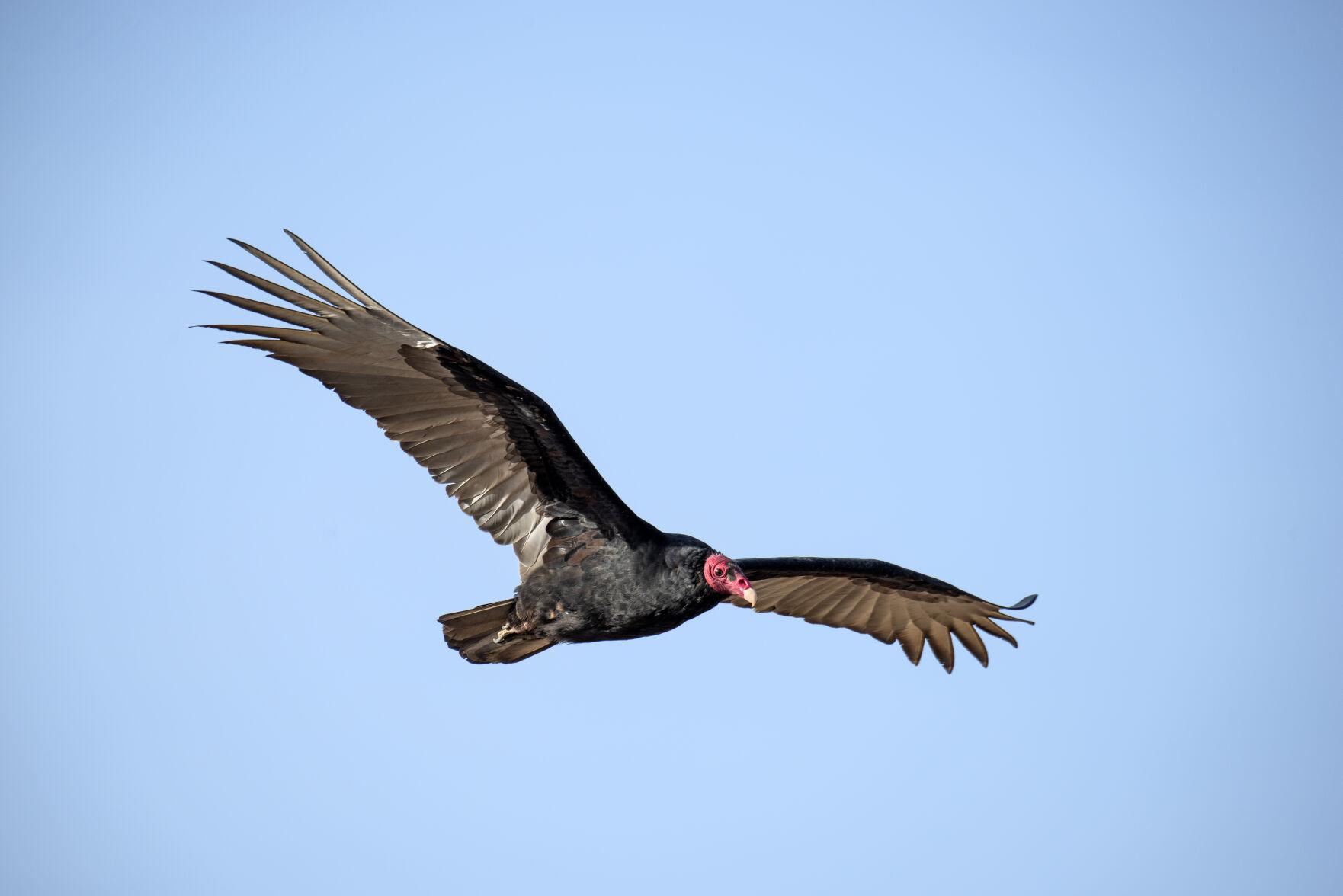 News
top story
Vulture-plagued city near Columbia tries to shoo them away with loud noise blasts
By Lauren Petracca lpetracca@postandcourier.com

FOREST ACRES — A small city just outside Columbia has a vulture problem.

Dozens of the large black birds of prey have circled over some Forest Acres neighborhoods for the past six months.

One resident complained to the city after two of the birds cornered a cat in a backyard, City Administrator Shaun Greenwood said.

At various points, the vultures congregated on the sports fields at nearby Trenholm Park, roosted on a cell tower on another side of town and patrolled dumpsters at fast-food restaurants along Forest Drive that are outside of city limits, Greenwood said.

They eventually returned to roost on a cell tower at Bethel Church Road and Covenant Road, a high point in the area.

Vultures circling the air near the intersection of Covenant and Bethel Church roads. Forest Acres officials told a resident he could blast a sort of flare gun periodically for a few days to try to keep them from roosting in the area. pic.twitter.com/Wjirq8vbD8

A fed-up resident in the city of 10,400 bought a bird banger, a device specially made to shoo away the nuisance birds.

After dark had settled over the city Feb. 17, two booms sounding like gunshots separated by minutes could be heard throughout the area. The following morning another single blast followed.

City officials had warned residents in a Facebook post of the periodic noise, an effort they said they authorized. Repeating the blasts in the evening for several days is meant to drive the vultures away from their roost, but time will tell whether it works.

Vultures are capable adversaries when it comes to most methods used against them, experts say.

"While they may be effective for awhile, usually it wears off once they realize it's just a threat and no real harm," said Jim Elliott, director of the Center for Birds of Prey in Awendaw. "They're smart enough to figure it out, is the bottom line. So it stops working, if it works at all."

Vulture problems aren't unique to the city just northeast of Columbia. The birds, which can have wingspans of more than five feet, roost in large numbers throughout the Southeast and can wreak havoc when roosts are near populated areas.

Editorial: Stop the loss of birds

You don’t have to be an ornithologist — or even an avid bird watcher — to have been unsurprised by a recent report on the dramatically diminishing bird populations in North America. Alarmed by the numbers, yes. Understandably so. But not surprised by the trend.

Turkey vultures and black vultures are common in the area as they scavenge for food, helping clear the landscape of dead animals that can breed disease. In that sense, Elliott calls them among the most important birds there are.

But black vultures have been known to kill and eat domestic birds and vulnerable livestock, and are viewed as a smelly nuisance and can damage roofs and vehicles.

Elliott said he has heard of black vultures ruining a paint job on a truck, ripping off the windshield wipers and tearing out the rubber liner around the windshield and doors.

Colloquially known as buzzards, vultures roost together in numbers ranging from dozens to hundreds. Their roosting numbers are greatest from late fall to early spring, according to information on the species from the state wildlife agency.

Their federally protected status can come as a surprise to those wanting to eradicate the birds using more direct methods.

"All you're really able to do is scare them away," Greenwood said.

In Batesburg-Leesville, a small Lexington County town about 35 miles west of Columbia, officials have dealt with the birds for years.

A large roost has settled on a tower next to Mount Olive Baptist Church, with birds moving from the tower to church roof and leaving droppings all over, Mayor Lancer Shull said.

The town had begun considering fresh ideas for moving the birds as the COVID-19 pandemic took over.

Shull said he's wondered whether building a tower in another part of town, perhaps as a training facility for the U.S. Army Reserve, would draw the birds somewhere they aren't such a nuisance to the town's 5,600 residents.

"That tower I'm sure to them, it just looks like home," Shull said.

Shull lives across from a pecan orchard and before he was mayor, a neighbor played wild bird calls from speakers on stands in an effort to keep away crows. The noise led to a dispute with a nearby medical office and the practice eventually ended.

While driving to Myrtle Beach recently on an overcast winter day, I thought back to the time when the bypass highway was first built and there was nothing but forest on either side.

The issue in Forest Acres started with the birds appearing from nowhere to roost in a cellphone tower. Residents often call City Hall asking if they can shoot the birds.

Greenwood said he reminds them that it is illegal to fire weapons within the limits of the city as well as the vultures' federal protections status.

Then a resident bought the bird banger, similar to a flare gun, and began using it with city permission Feb. 17.

In a Facebook post before the first attempts, the city told residents they could expect loud bangs at about 7 p.m. for the next several nights — neighbors had previously called the city in alarm when the person had discharged the blaster without prior warning.

The device launches a cartridge that pops in the air with the intent of driving off birds.

Earlier efforts included consulting with the state Department of Natural Resources and hanging a dead vulture in the area to warn off birds. City officials talked with the apartment complexes and businesses in the area to make sure their trash was properly stored in dumpsters.

In Audubon's footsteps: Italian artist mounts show inspired by 'The Birds of America'

In 2015, Italian artist Hitnes embarked on a three-month tour of the U.S. to observe America's bird species and, ultimately, organize a fascinating exhibition called “The Image Hunter: On the Trail of John James Audubon.”

The city will try almost anything wildlife officials suggest if the noise fails to work, Greenwood said.

Elliott, from his office in the Lowcountry, said he wishes people would take into account the good vultures bring in balancing out nature.

"It would help to understand there is a very beneficial and positive side to having them around," he said. "It can help being a little more tolerant and a little more understanding and not taking a hard and fast rule that they shouldn't be there."