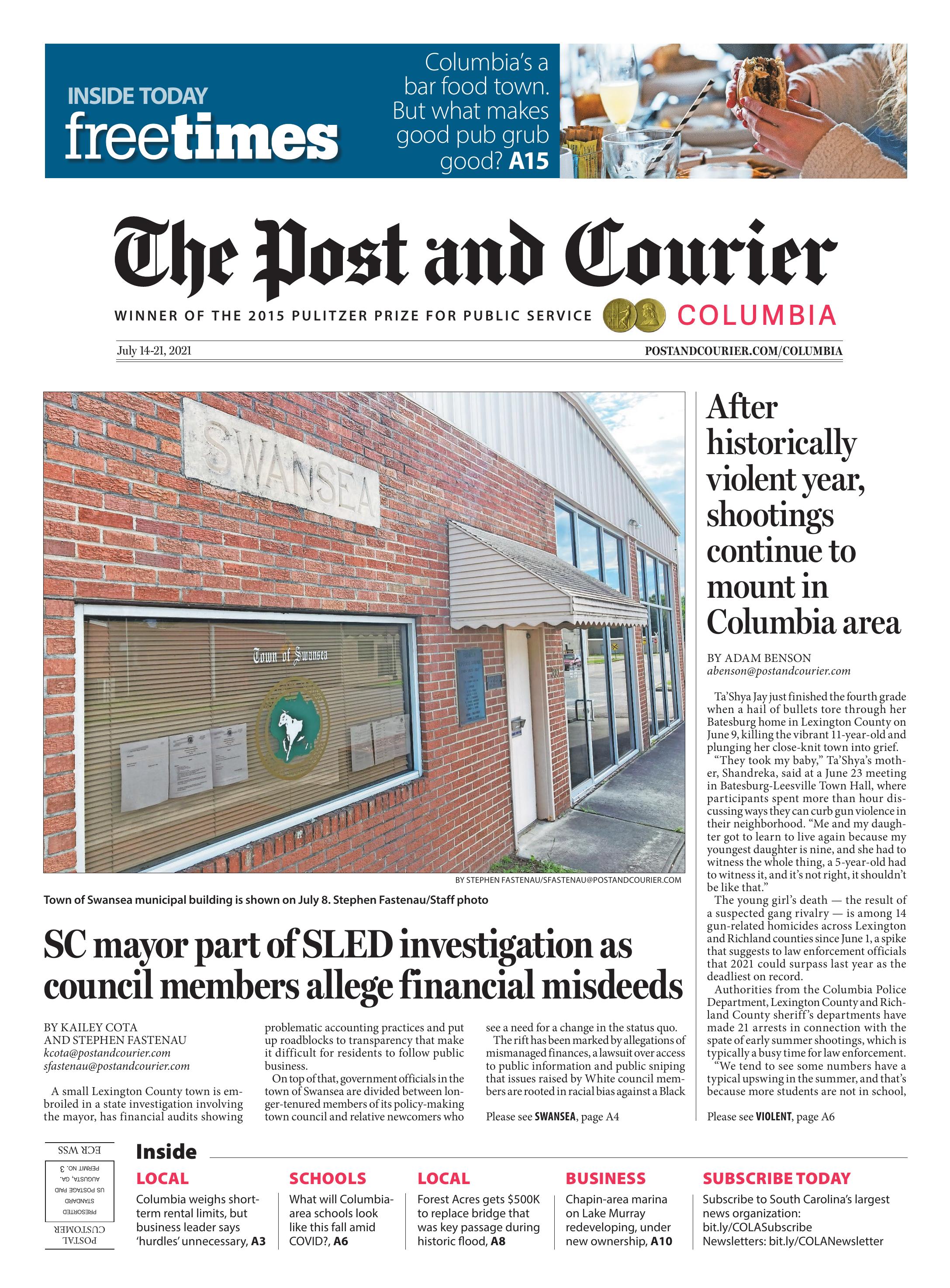 The Swansea municipal building is pictured on July 8, 2021. The small Lexington County town is part of a state investigation involving the mayor, has financial audits showing problematic accounting practices and has put up roadblocks to transparency. Stephen Fastenau/Staff

SWANSEA — A small Lexington County town is embroiled in a state investigation involving the mayor, has financial audits showing problematic accounting practices and has put up roadblocks to transparency that make it difficult for residents to follow public business.

On top of that, government officials in the town of Swansea are divided between longer-tenured members of its policy-making Town Council and relative newcomers who see a need for a change in the status quo.

The rift has been marked by allegations of mismanaged finances, a lawsuit over access to public information and public sniping that issues raised by White council members are rooted in racial bias against a Black mayor.

The town of Swansea and its mayor, Jerald Sanders, are part of a probe by the State Law Enforcement Division, Swansea council members Michael Luongo and Doris Simmons told The Post and Courier.

Sanders has moved around large sums of money without the council's authorization, cut a town check to his own charitable organization and resisted requests from Luongo and Simmons for financial records, they allege.

The Attorney General’s Office is working with SLED as it does in many cases, but there have been no charges and therefore nothing for the prosecuting agency to comment on, spokesman Robert Kittle said.

SLED opens investigation into mishandling of finances in Allendale County

The State Law Enforcement Division is investigating the findings of a new forensic audit that found severe financial problems left the county at serious risk of fraud.

Reached by phone July 8, Sanders declined to respond to the allegations. In Swansea's weak mayor form of government, the mayor is a part-time role with the same voting authority as other council members. Sanders is a longtime Swansea resident and pastor of Antioch Missionary Baptist Church in North.

Linda Butler, who has been on council for more than 30 years, said she fully supports Sanders and knows he didn't do wrong. "I stand by the mayor 100 percent," Butler said.

Sanders has been Swansea’s mayor since 2018, elected in 2017 after nine years on the council.

He unseated longtime Mayor Ray Spires, who was the subject of previous probes of financial mismanagement, according to multiple news reports, and has since run unsuccessfully to return to council.

You’ve heard of the broken-window approach to policing? It’s the idea that an unrepaired broken window signals that nobody cares enough to repair it and encourages criminals to break more windows, and engage in more and more dangerous acts of lawlessness. So just as it’s important to replace the broken window immediately, it’s important for police to arrest people for such minor crimes as jaywalking, loitering and public drunkenness.

The SLED investigation and questions about finances were first reported by The Lexington Ledger.

Luongo said he and Simmons, an accountant, found in May 2020 that Sanders had given $2,950 of town money to a private charitable organization the mayor oversees.

SLED began probing the town’s finances at some point after that, and its inquiry has included years of town financial records, Luongo said. State investigators recently cleared council members to speak publicly about the case, Luongo said.

In the spring of 2020, Luongo and Simmons said the mayor moved $167,000 of the town’s money from a special utilities fund to the general operating account without council approval, Simmons and Luongo said. The two believe Sanders moved the town’s money to cover deficits on the budget.

Luongo said the mayor and town clerk ignored his question when asked about the transfer during a virtual meeting. He said a town attorney pledged he would research the town rules related to moving the money but that Luongo never heard back.

Butler said she is unaware of the mayor moving this money — or any town money greater than his allowed $5,000 — without asking the Town Council for permission.

Council is behind on passing its next annual budget as was required by July 1 and will have to reconcile a $72,000 deficit, Luongo said, based on what Town Council was told in a special meeting July 6.

It's unclear who or what is to blame for the deficit, but balancing the books isn't a new issue for town leaders.

SC judges remain on the bench for years despite alleged crimes, ethical lapses

When The Post and Courier asked for a copy of Town Council meeting minutes and audit reports, a town employee told a reporter to submit an open records request. The documents are referenced on a recently revamped town website but weren't accessible as of July 9.

Luongo provided The Post and Courier with audit reports from 2017 to 2020. These reports showed that town accounting duties have not been properly organized, leading to potential oversight issues and problems that wouldn’t be caught in a timely manner.

A 2017 audit determined the town was not keeping accurate financial records and should hire an experienced accountant. A 2019 report noted the issue had been addressed.

The town had not properly separated accounting duties between 2003 and 2016, with the same person serving as cashier and handling accounts receivable records and receipts, leading to potential oversight issues and problems that wouldn’t be caught in a timely manner, a 2018 audit found.

What’s more is that at least three different town offices wrote checks, a 2019 report found. The issue could lead to the possibility of an employee using town money without permission, which would only be discoverable by an audit, the report said. A 2020 report said the previous year’s findings had been addressed and additional personnel were hired.

Payments aren’t recorded in a central ledger, the 2019 report found, making year-end accounting difficult. An auditor recommended the town limit the number of people who write checks and that checks require two signatures.

From a sheriff withdrawing cash without explanation to a clerk paying Christmas bonuses without reporting them to the IRS, a new report outlines vast problems with Allendale County's finances.

A 2020 report said the previous year’s findings had been addressed and additional personnel were hired.

Amid the SLED investigation and questions over the town's financial management, Sanders has not sat idly.

He presided over a special town meeting July 6, where he proposed a property tax increase and a hospitality tax, Simmons and Luongo said. He also proposed raising the amount the mayor can spend without council’s approval from $5,000 to $20,000, which would give the mayor greater control over the town's finances.

A right to know

Those who didn’t attend the meeting about the tax increases and expanding the mayor’s spending power could find it difficult to learn what decisions were made.

As of July 9, links to basic information such as meeting agendas, minutes and financial audits were still broken and directed visitors to an error page.

Luongo said he thinks the taxes passed the first reading, but without the public documents, The Post and Courier was unable to confirm the status of the tax increases or the proposal to expand the mayor’s spending power.

Sanders and town officials have refused to provide regular financial reports requested by Luongo and Simmons, the council members said. 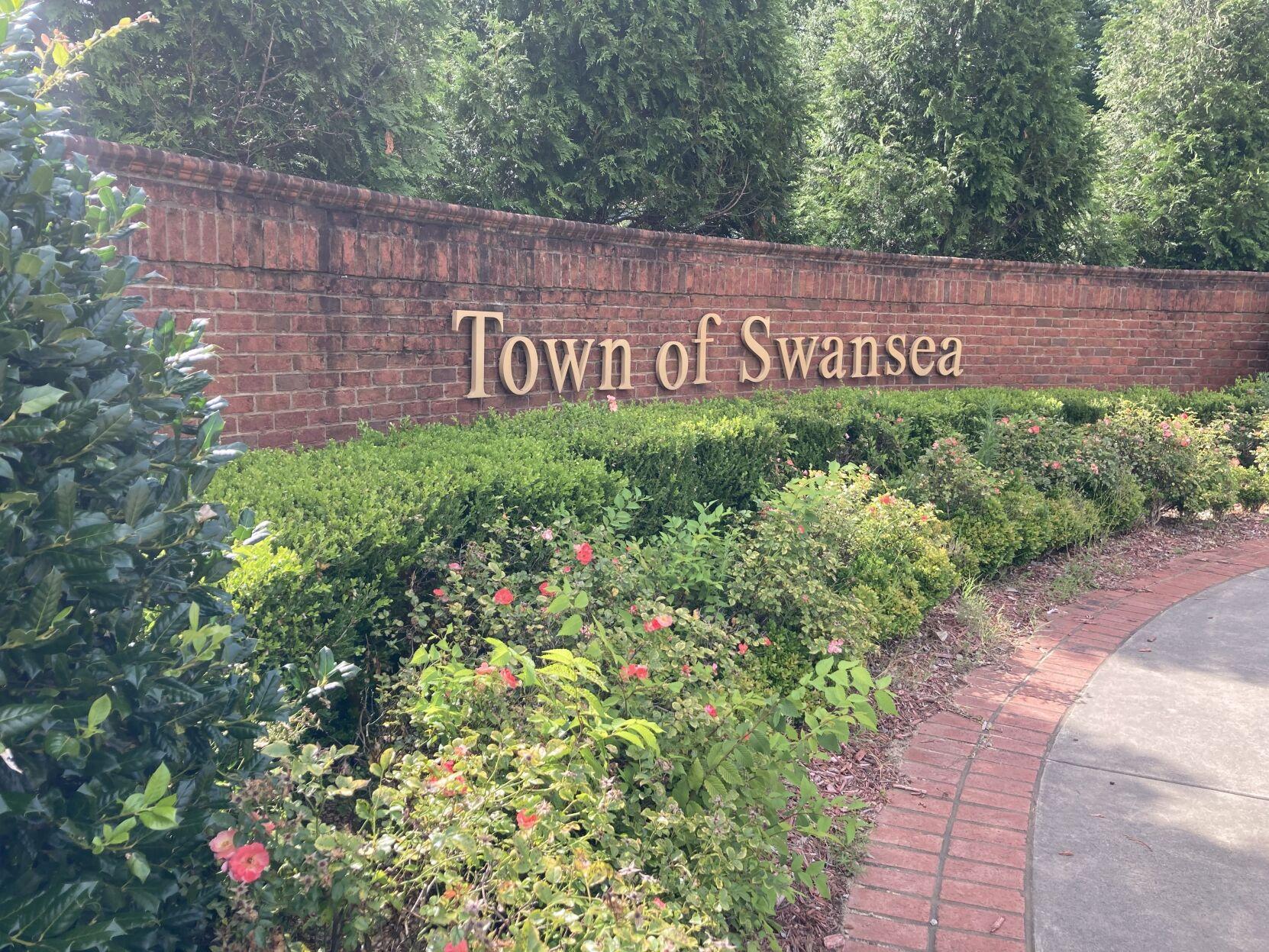 A small park and fountain at the intersection of South Church Street and West 2nd Street welcome visitors to the town of Swansea. Stephen Fastenau/Staff

Luongo said he is locked out of town hall, and has only been allowed into the building once, in August 2019, to listen to a recording of a council meeting with the mayor and town clerk present. Council meetings typically take place next door in the courtroom within the Police Department.

The town hall foyer is open for residents to pay bills, but the rest is closed off, Luongo said. Swansea's website says town hall is closed because of COVID-19.

Simmons and her attorney, Jacque Moore, sued the town in May 2020 over access to records. Because of this, Simmons said she was allowed to go into town hall twice at the end of 2020, for about two hours, to look at the town's checks.

In the court papers, Simmons said the town did not turn over canceled checks and other financial documents she had requested under the State Freedom of Information Act and that the town had violated state law.

She asked the court to find that she has the right to town financial records.

The town denied the claims in a response from Joseph Dickey, a lawyer who records show represents the town. The case is scheduled for a jury trial the week of July 19, court records show.

Between June 18 and June 22 this year, Simmons said Moore unsuccessfully attempted to serve the mayor and the clerk treasurer a subpoena for them to present all financial records since 2018 as part of the suit.

"Our town has been a victim to corrupt government for so long," Simmons said. "We have been struggling trying to get things back the way they should be."

Butler said she has never tried to get additional financial information other than what the mayor provides in meetings.

"They're just on a hunt,” Butler said of Luongo and Simmons. “And maybe they know something that I don't know. Whatever they are planning for, I'll be glad when they do find it, so that all this craziness can stop.”

Richland County officials talked secretly about a proposed settlement with the state over alleged misspending of county penny tax funds, and later in a public vote continued to keep the taxpayers in the dark about how they decided to proceed in a matter involving tens of millions of taxpayer dollars.

The five-member Town Council is divided over these financial questions.

Butler, a Sanders supporter, believes Luongo and Simmons are fighting to prove more than mismanaged finances on the mayor’s part.

"I feel like some people, Mr. Luongo and Ms. Simmons, have an issue working under a Black leader,” Butler said. “I really feel that.”

Sanders, Butler and Councilman Woodrow Davis are Black, while Luongo and Simmons are White. The Town Council reflects the makeup of the town's population, about two-thirds of which is Black, according to the U.S. Census Bureau.

Luongo and Simmons both denied that race has anything to do with their concerns and said Swansea’s issues are about right and wrong, not Black or White.

“Right is right; wrong is wrong. Color has nothing to do with this situation," Simmons said.

Regardless of the sources of Swansea's predicament, Luongo, Simmons and Butler all said they want what's best for the town.

"So far, we haven't been able to do anything, because we're always bickering over issues,” Butler said. “If we could all just get together and work together, Swansea would be a better place." 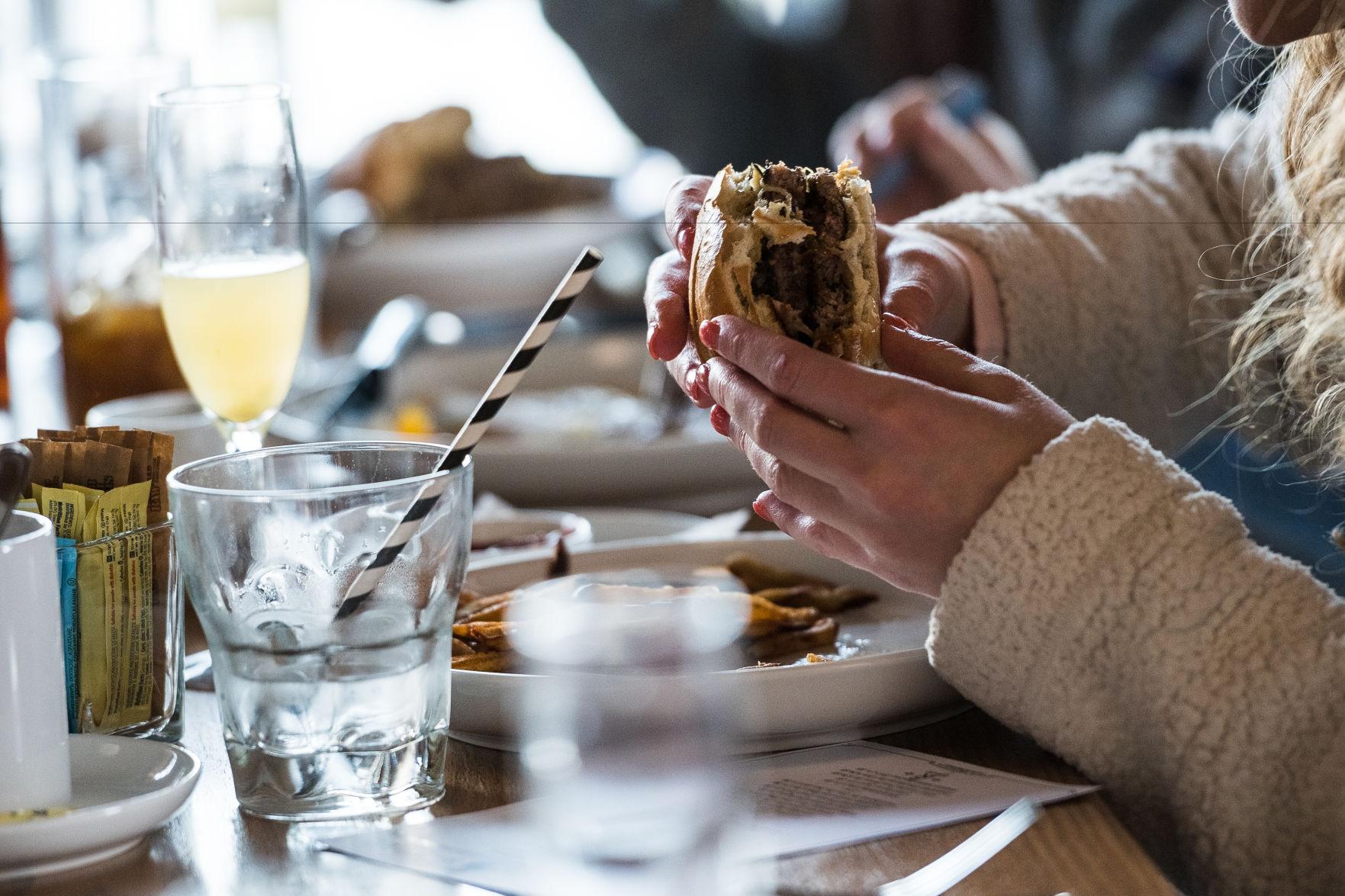