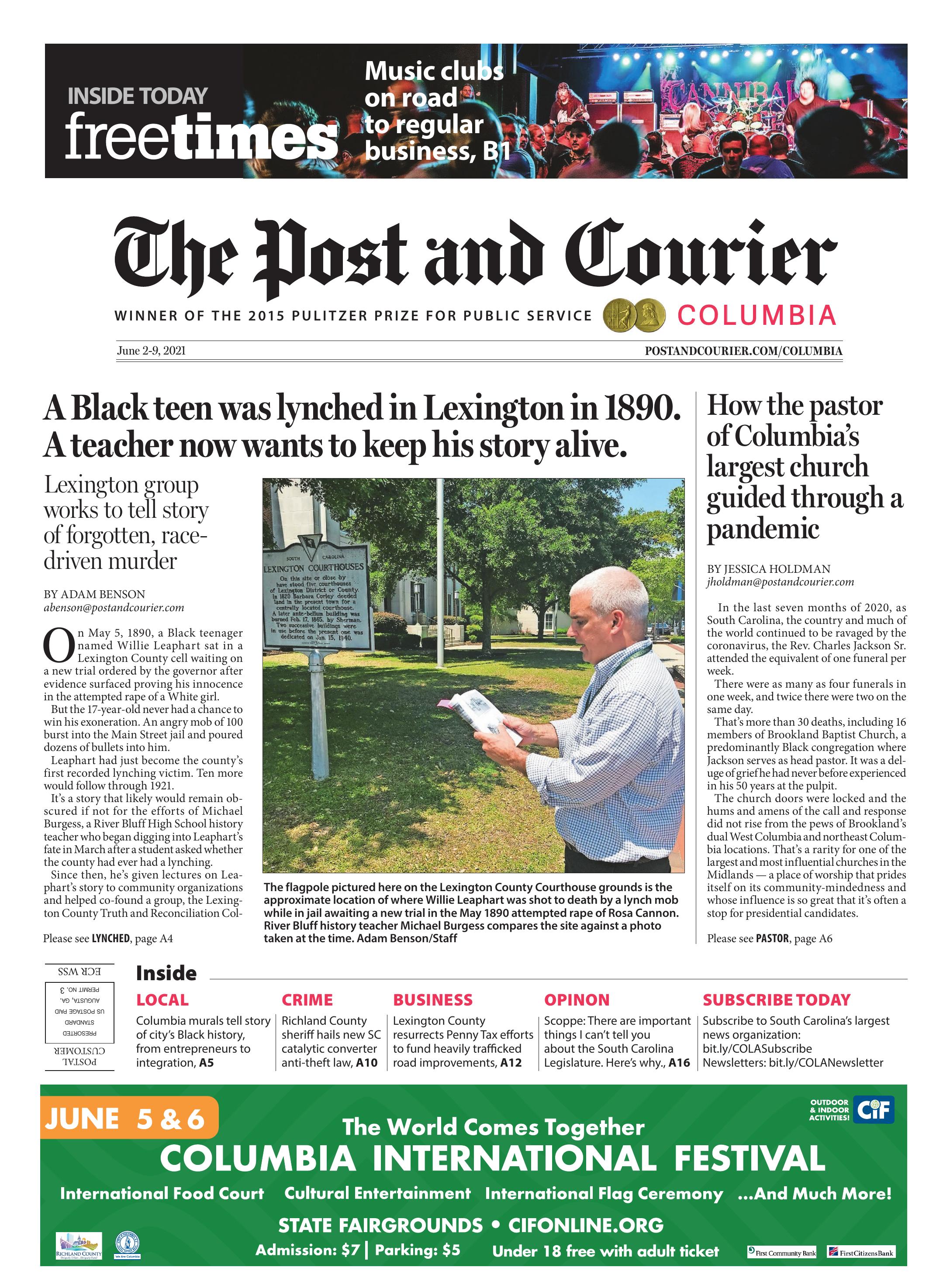 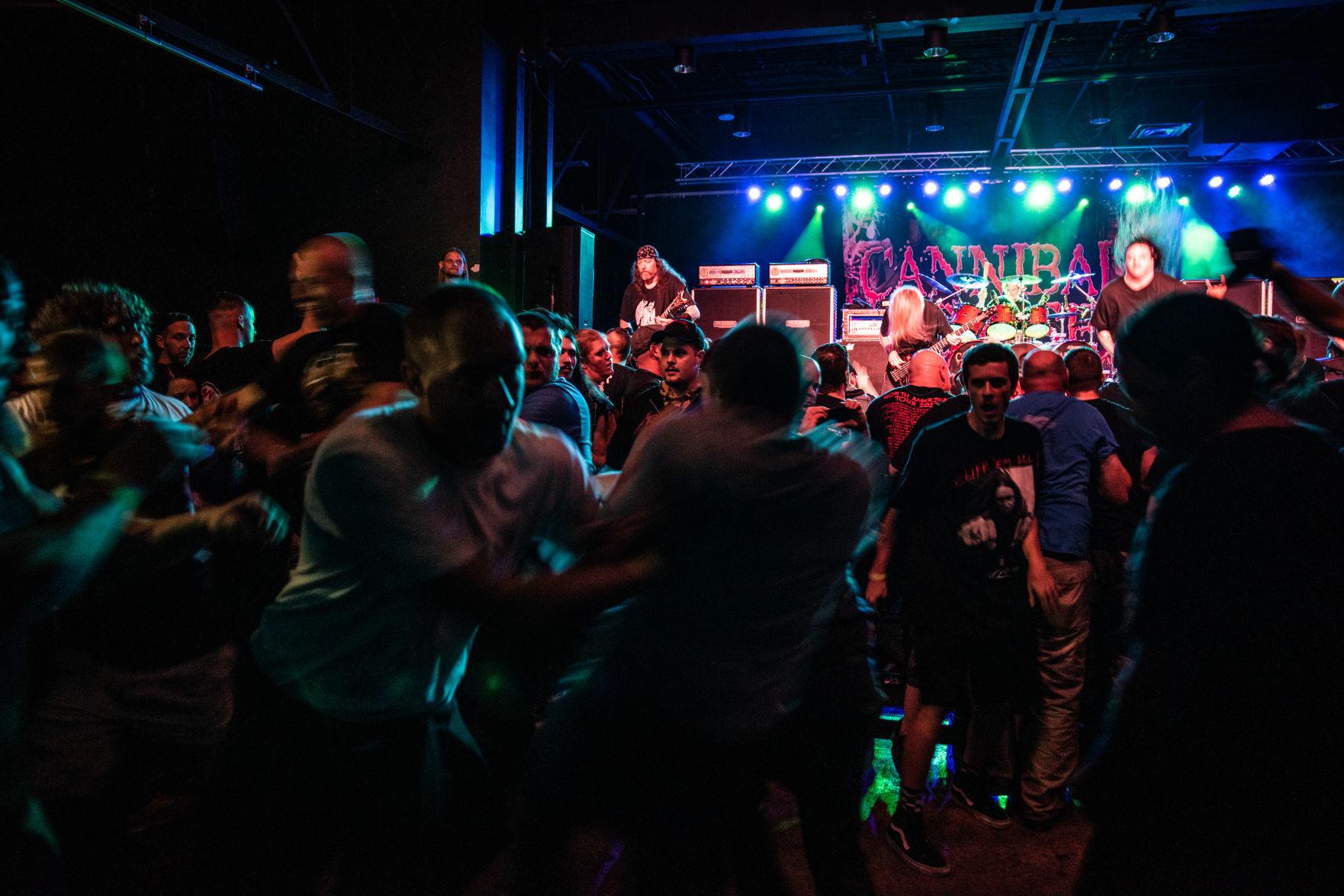 Cannibal Corpse performing at The Senate

Columbia
top story
A Black teen was lynched in Lexington in 1890. A teacher now wants to keep his story alive.

The flagpole pictured here on the Lexington County Courthouse grounds is the approximate location of where Willie Leaphart was shot to death by a lynch mob while in jail awaiting a new trial in the May 1890 attempted rape of Rosa Cannon. River Bluff history teacher Michael Burgess compares the site against a photo taken at the time. Adam Benson/Staff

The gravestone of Lexington native and World War I Purple Heart recipient Davis Gantt is located in a cemetery on the grounds of River Bluff High School. Adam Benson/Staff

Former U.S. Congressman and abolitionist Simeon Corley implicated Willie Leaphart as the culprit of an attempted rape against 16-year-old Rosa Cannon in May 1890. He's laid to rest at the St. Stephen's Lutheran Church cemetery in Lexington. Adam Benson/Staff

The name of Davis Gantt, a World War I Purple Heart recipient who died of complications from pneumonia following a battlefield chest wound in 1918, is etched on a marker at the Lexington Courthouse grounds, which separates names of soldiers by their race. Adam Benson/Staff

LEXINGTON — On May 5, 1890, a Black teenager named Willie Leaphart sat in a Lexington County cell waiting on a new trial ordered by the governor after evidence surfaced proving his innocence in the attempted rape of a White girl.

But the 17-year-old never had a chance to win his exoneration. An angry mob of 100 burst into the Main Street jail and poured dozens of bullets into him.

It’s a story that likely would remain obscured if not for the efforts of Michael Burgess, a River Bluff High School history teacher who began digging into Leaphart’s fate in March after a student asked whether the county had ever had a lynching.

Since then, he’s given lectures on Leaphart's story to community organizations and helped co-found a group, the Lexington County Truth and Reconciliation Collaboration, dedicated to accurately chronicling the area’s racially complex history. 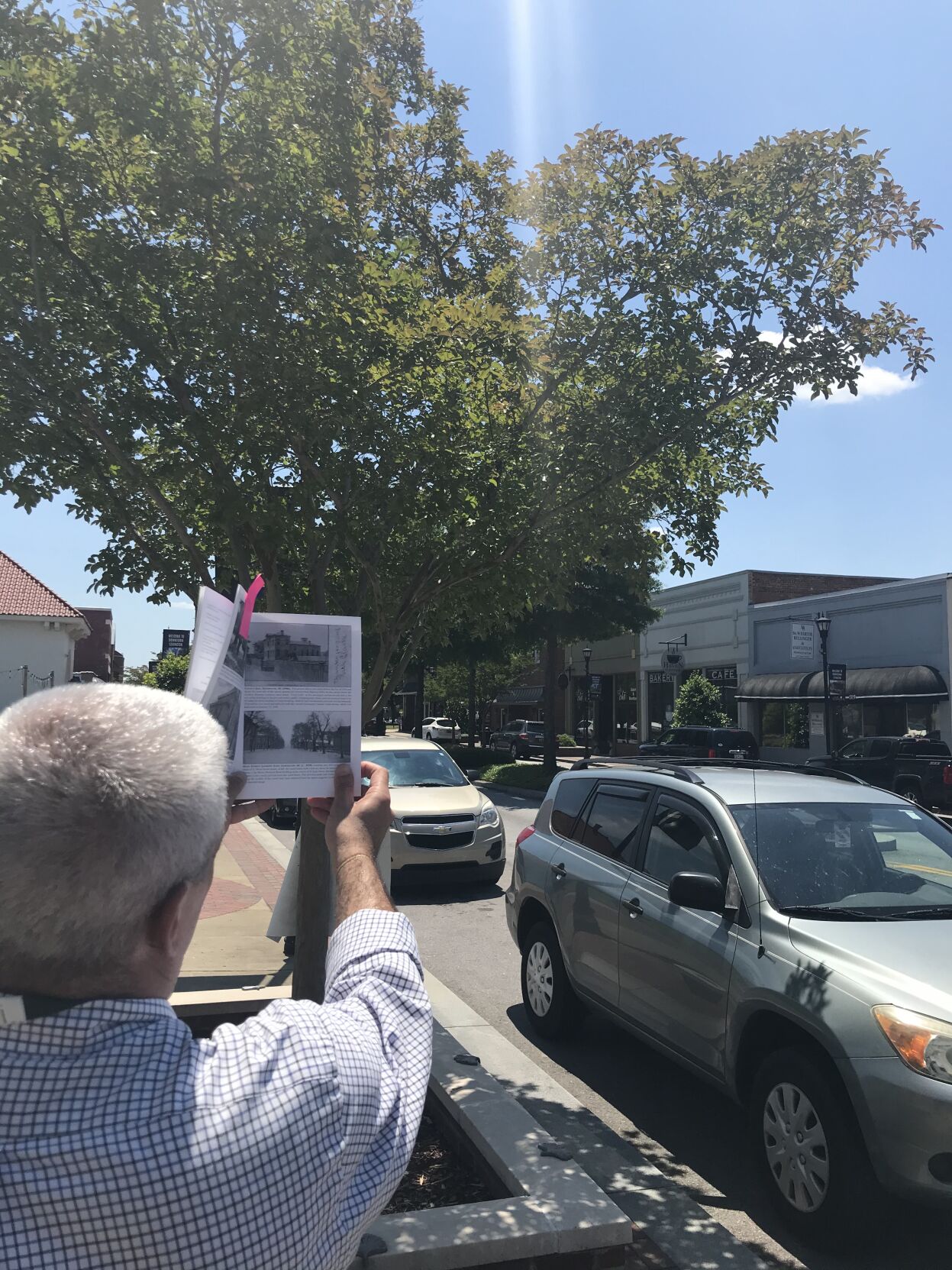 River Bluff High School history teacher Michael Burgess orients himself along Main Street in Lexington as he compares the location of a courthouse in jail from 1890 against modern-day buildings. Adam Benson/Staff

The group wants to see a marker erected at the site of Leaphart's murder, and Burgess hopes to eventually win him a pardon.

The group's first project is engaging the Alabama-based Equal Justice Initiative, the group behind the massive lynching memorial in Montgomery, to help make a Leaphart recognition happen. The initiative helped to get a plaque installed in downtown Abbeville in 2016 to commemorate the 1916 lynching of Anthony Crawford, and is working with a group in Union County cataloguing the lives of 17 lost to vigilante justice there between 1865 and 1930.

“It’s a powerful image to be right there in the town, but Lexington is huge and we certainly don't want to neglect telling those other stories as well,” said Christina Isenhower, a social worker and a co-founder of the Lexington collaboration.

In the tale of Leaphart, Burgess saw a timely symbol of Lexington’s need for reconciliation and honesty in a period of turmoil and upheaval.

"What happened on this site has completely disappeared. It's just not talked about," Burgess said steps from where Leaphart was shot. A historical marker nearby describes the history and construction of the courthouse grounds.

"It's hard to build a diverse, tolerant community when you haven't engaged in the reality of the past. We're losing the roots of our story," Burgess said. "This community has ignored this and other pieces of history and there are still racial issues in Lexington, and the ability to begin to address those begins with accountability of the past."

It is said that those who do not learn from history are doomed to repeat it. But what if the history is overlooked and nearly forgotten?

He began wearing a rubber band on his left wrist after learning of Leaphart's killing. The slight but constant pressure and occasional pinch is an admonition the departed teenager still has things to say.

“I put it on there about a week into this to remind myself to do something every day for Willie Leaphart," the Lexington One educator said. "I don't go waving it around but to me it's a personal reminder that this young man could have been one of my students."

Burgess has been in touch with Town Council member Steve Baker and Terrence Green, the town’s first Black police chief, and James Gates, president of the Lexington County NAACP, to help build connections with other Black leaders.

Bobby Donaldson, director of The Center for Civil Rights History and Research at the University of South Carolina and a scholar with Columbia's civil rights history initiative, connected Burgess with Isenhower.

ABBEVILLE — In this small South Carolina town near the Georgia line, where some say the Confederacy was born and died, descendants of a man lynched 100 years ago are erecting a downtown memorial to him and other black men killed by white mobs after the Civil War.

“People are daring to tell the truth," Donaldson said. "I think if the citizens today weren't doing the work they're doing, this is a story that would be buried and long forgotten.”

‘A most atrocious crime’

Thousands have traveled past the site of Leaphart’s death in the 131 years since, given it occurred on what’s now the county courthouse complex in downtown Lexington. It's across from a mortgage company and blocks away from an Italian restaurant and an ax-throwing venue.

At the time, Leaphart’s case became a media sensation, with dispatches on the jailhouse killing filed to newspapers as far away as Los Angeles and Vancouver, British Columbia.

Part of the interest, said Lexington County Museum head J.R. Fennell, is due to a promise made upon the honor of prominent residents at the time that no harm would come to Leaphart as he waited for court proceedings to start again.

He was granted a new trial by Gov. John Richardson III based on an alibi unearthed by G.M. Graham, Leaphart's attorney, and other evidence proving the teen wasn't near the crime scene.

And then there was the explosive testimony of the victimized girl, Rosa Cannon, who at the time of the attack was staying at the home of former congressman Simeon Corley.

Cannon’s brother told the court Rosa was pressured to name Leaphart by Corley.

On Feb. 13, 1890, Cannon wrote to her mother that she was unsure Leaphart had anything to do with the crime.

In a new PBS 'American Experience,' a blinding of a Black SC sergeant awakens a nation

Judge Richard Gergel's acclaimed book is now the basis of a gripping PBS documentary on how a soldier's savage blinding propelled an awakening in a president and a Charleston judge.

“Mr. Corley wants the boy punished an says it is Willie Leaphart, an mey (sic) have been, I don’t say positive it is,” Cannon wrote.

Her comments were published in several newspapers that dedicated pages to testimony given under oath after Richardson released affidavits related to the case.

Fennell, who has studied the Leaphart case, said no information has been found that would point to why Corley implicated Leaphart, certainly knowing what would come of it.

“In that time period if an African American was accused of something, they were basically assumed to be guilty,” Fennell said.

The posse initially wanted to hang Leaphart from a tree in Graham's front yard, but he fought off the attackers until they turned to guns and carried out a kind of justice swifter than a court could provide, a newspaper account recorded.

"Five men successively attempted to enter the cell and were cracked over their heads. After several hundred shots had been fired a bullet struck Leaphart in the head, hurling him to the floor," a May 14, 1890 Manning Times article stated. "He was then dragged out and sixteen balls from a Winchester were fired into him."

The Topeka State Journal in Kansas ran a story about Leaphart’s murder under the headline: "Shot to Death, Though Innocent," and a May 11, 1890, editorial in The Charleston News and Courier condemned the shooting, calling it a “most atrocious crime.”

“It adds another hideous chapter to the criminal history of the State, and goes far to sustain the adverse criticism of those who charge our people with having but little regard for the sanctity of human life,” the newspaper wrote.

Even Cannon’s father was skeptical of Leaphart’s involvement. An April 1891 Augusta Chronicle article revealed that a deathbed confession from Patrick Cannon’s stenographer “heard of and read her letters declaring the boy’s innocence.”

Leaphart is thought to be the first of 12 lynching victims between 1890 and 1921 in this rapidly growing Midlands county — and among the 189 reported statewide between 1877 and 1950, according to the Equal Justice Initiative. 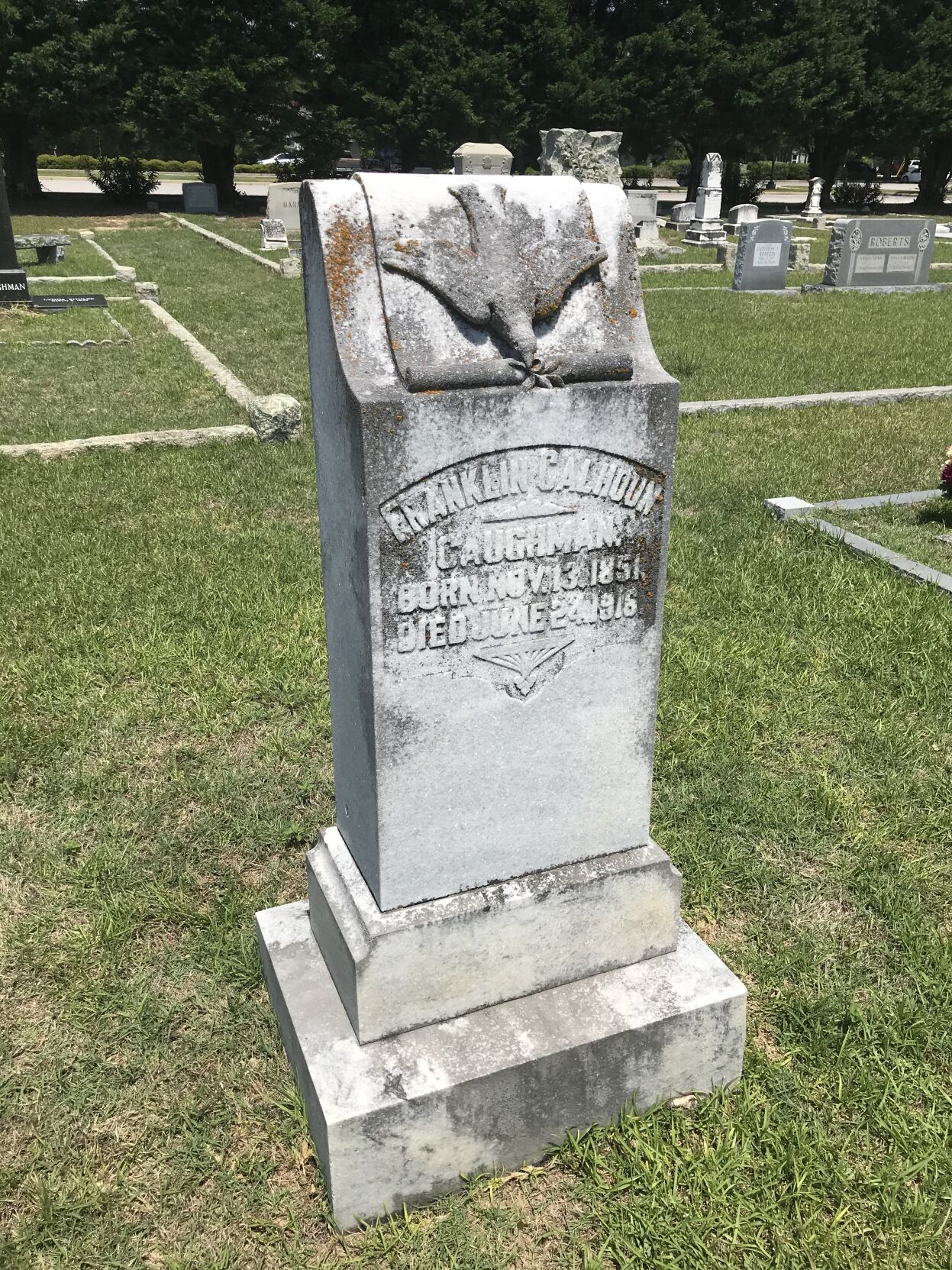 The gravestone of F.C. Caughman, an instigator of the lynch mob that shot Willie Leaphart to death in his jail cell in May 1890, at the St. Stephen's Lutheran Church cemetery in Lexington. Adam Benson/Staff

Newspaper reports of the time suggest Richardson may have lost his party's support due to the decision that Leaphart be given a new trial. In November 1890, post-Civil War white supremacist Ben Tillman sailed past A.C. Haskell in the gubernatorial election, capturing almost 80 percent of the vote. Richardson is best known for having established Clemson College, now Clemson University, during his term.

“Any kind of leniency shown is seen as weakness or bowing to the race question,” Fennell said.

Many of the main players in this act are also buried within feet of each other at the cemetery of St. Stephen’s Lutheran Church in Lexington, where Burgess attends.

There’s the sheriff, George Drafts, who Burgess said threw his keys down to the armed posse. There’s F.C. Caughman, one of the mob’s instigators and another Tillman associate. And there’s the eclectic Corley, who was also a lifelong vegan and went on to be a special agent for the federal Treasury Department, according to his congressional biography.

The tours will guide people through the history of Black- and immigrant-owned businesses on Morris Street, sites important to the city's civil rights history and the restoration of a nearly century-old theater.

Caughman, who was arrested in June 1890 for his role in Leaphart’s death, was acquitted and later won a patronage job as clerk of the S.C. Senate, the Augusta Chronicle reported in August 1891.

‘A ceiling on the future’

For Burgess and others involved in the Leaphart reclamation movement, the hope is to eventually win a pardon. It's an act that may begin the long process of healing and spark frank discussion in a community Burgess says needs it badly. 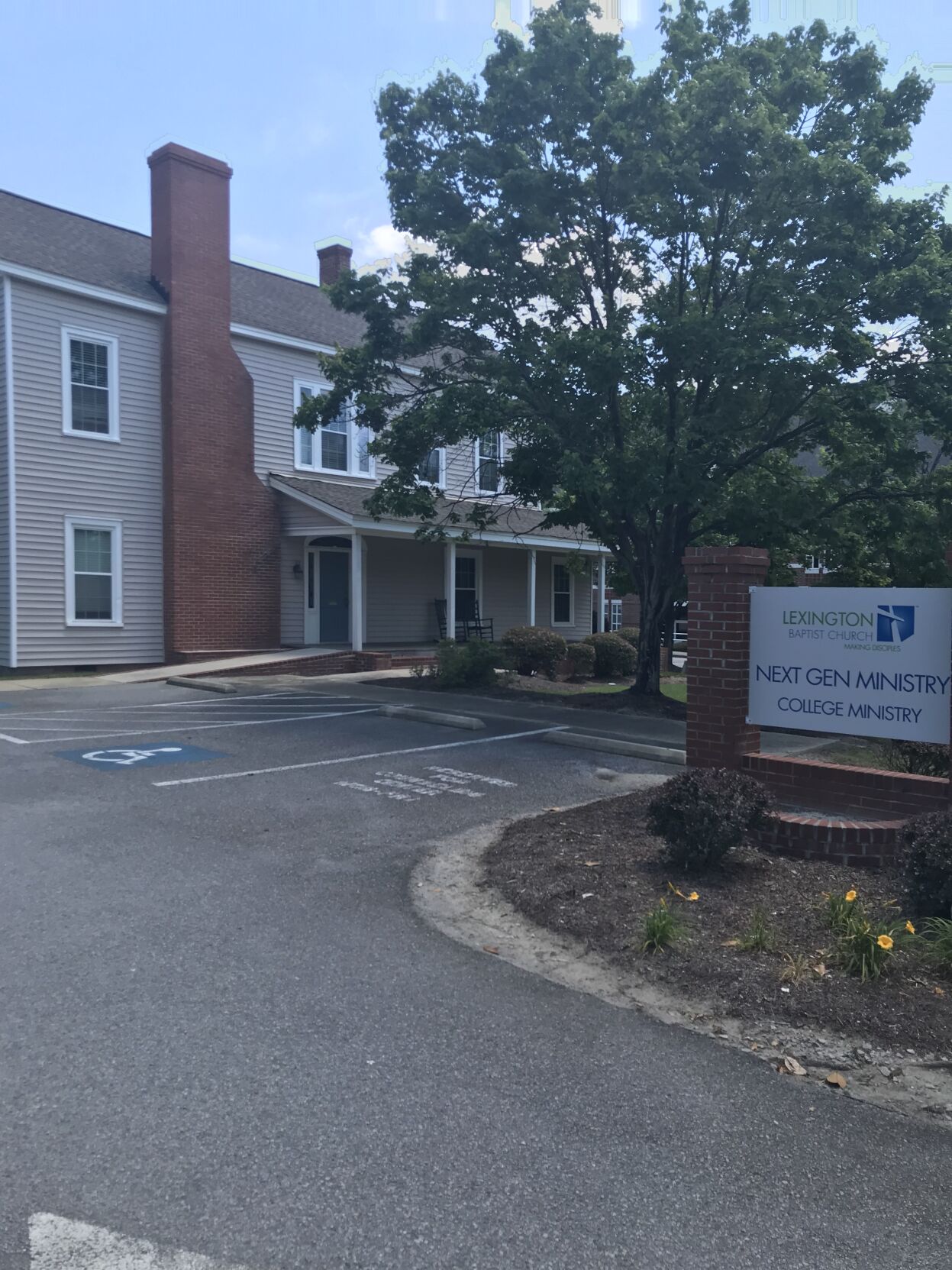 The home of C.M. Efird, who in May 1890 was a top campaigner for Democratic gubernatorial candidate Benjamin Tillman. The property is located just a few hundred feet from the Main Street site where Willie Leaphart was lynched. Adam Benson/Staff

“Lexington is one of the fast-growing communities in the state, and as this community grows and continues to become more diverse, there is a ceiling on our future if we have such a limited, closed misunderstanding of our past,” Burgess said.

Donaldson helped connect Burgess with Isenhower, and is impressed with their commitment to the venture.

“It’s an untold story in that community,” Donaldson said. “I think it reminds people of the trauma and the violence African Americans endured in the 19th and 20th centuries.”

Even if Leaphart had been tried fairly and sentenced to hang, the indignity of his death would remain, Isenhower said.

“The greater picture here about lynchings is that this violence and these White men in most cases did not allow justice to happen as they would have for someone that looked like them. That to me is the story,” she said.

Columbia's history being told anew with eye on humanity for all

Historic Columbia is making an effort to ensure the stories of enslaved people are brought to the forefront of their exhibits and displays.