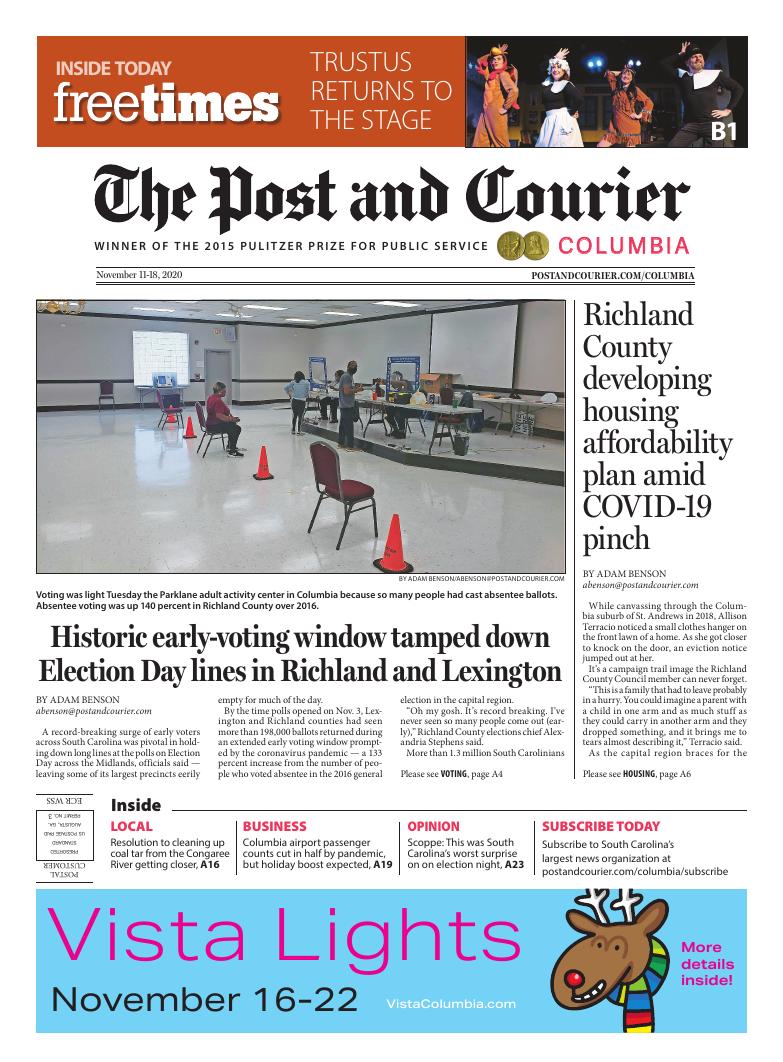 Voting was light Tuesday the Parklane adult activity center in Columbia because so many people had cast absentee ballots. Absentee voting was up 140 percent in Richland County over 2016.

COLUMBIA — A record-breaking surge of early voters across South Carolina was pivotal in holding down long lines at the polls on Election Day across the Midlands, officials said — leaving some of its largest precincts eerily empty for much of the day.

By the time polls opened on Nov. 3, Lexington and Richland counties had seen more than 198,000 ballots returned during an extended early voting window prompted by the coronavirus pandemic — a 133 percent increase from the number of people who voted absentee in the 2016 general election in the capital region.

In the Charleston area, weeks of record-setting early voting were followed by shorter-than-usual lines on Election Day. The nation's worst fears of a disrupted presidential election did not bear out in South Carolina. Voting was mostly smooth around the state.

More than 1.3 million South Carolinians voted absentee ahead of Election Day, with 438,000 of those returned by mail. Four years ago, 503,000 people total voted absentee, either by mail or in-person.

Voters submitted 300,000 more mail-in ballots than in 2016, leaving normally packed church halls, school gymnasiums and other polling sites in solitude for long spells on Election Day this year. Poll workers at the Gadsden Community Center handled lines of up to two hours on Tuesday morning, but the midday bump never came.

Even so, precinct numbers at the community center matched turnout from previous presidential elections. A half hour before polls closed, the site saw nearly 1,100 of its 1,541 registered voters cast ballots. More than 800 were completed prior to Nov. 3.

A Post and Courier analysis of precinct-level results statewide offers some insights about how the senate race played out.

At nearby Horrell Hill Elementary, 1,600 absentee ballots had been filled by 5:40 p.m. — more than three times the number cast in-person, officials said.

Across Richland County at the North Springs Park Community Center ,which drew thousands of voters in June after four precincts were consolidated for the primaries, a desolate parking lot greeted those who turned up in-person on Election Day. Of the precinct’s 1,541 registered voters, about 150 were recorded on Tuesday.

Glitches came early as voting started across the Columbia area from faulty Wi-Fi to problem passwords. Long lines, however, are moving smoothly for the most part.

Chris Whitmire, a spokesman for the S.C. Election Commission, said absentee voting could represent more than half of the state’s turnout, based on unofficial results. The current record is 24 percent, from the 2016 presidential race.

“Removing that number of voters from Election Day takes a lot of stress off of the polling place process,” Whitmire said.

Lawmakers expanded early voting in mid-September with bipartisan support. Typically, South Carolinians are required to cite one of several possible reasons to vote absentee, including being 65 or older, having a physical disability, work requirements or being out of town on Election Day.

But the General Assembly and Gov. Henry McMaster dropped those restrictions, allowing anyone to vote absentee if there is a “state of emergency” in their area, which covers all of South Carolina due to the coronavirus. The extension applied only to the 2020 general election.

It meant Adam Westmoreland had an easy time voting when he arrived at Cayce’s American Legion Memorial Post 130 at 6:30 p.m. on Tuesday.

Unlike the day before, there was no line.

“I should have waited,” a man called out as he walked his dog past the Naples Street legion hall.

SC voters turn out in droves for historic election

Voters turned out in droves across the Palmetto State, joining hordes of Americans determined to cast their ballots amid a deadly pandemic, a listing economy and political divisiveness that has marked one of the most contentious campaign seasons in modern times.

Precinct clerk Pamela Sulton said the early morning line that started forming before polls opened stretched down the length of the block, past the tennis courts, all the way to State Street.

She said, once the doors opened though, voters were able to move through smoothly. A line remained until noon. By 6 p.m., 600 people had cast their ballot in person at the precinct, making up 32 percent of its total registered voters.

The same story held true at several Lexington County precincts in Cayce and West Columbia. Voters turned out early but, come the evening hours, there weren't the usual lines at the polls. Instead, workers stood idly talking to one another and counting down the final minutes.

Haley Parker, a 30-year-old banker who accompanied Westmoreland as he voted, said it took her an hour and a half to vote at Ebenezer Pentecostal Church in the morning. She had shown up before polls opened and stood in line to cast her ballot.

Ernest Monts, the clerk for the Robert G Ward Family Life Center precinct, said the morning line wrapped around the side of the square metal building, a rarity for the West Columbia location. People waited about an hour and a half but there were no other lines or issues the rest of the day.

Monts said 677 voters had cast their ballot in person as of 5:30 p.m., making up 36 percent of the precinct’s registered voters.

But for some, the avalanche of early voting was enough to make them wait until Election Day, such as 71-year-old Sylvia Moore, a retired teacher who cast a ballot curbside at Irmo Elementary School.

“The reason I came out on Election Day is because that’s what I’m accustomed to doing, and I guess I trust this process better,” she said. “I figured my vote would count if I came this day. I feel comfortable.”

Jessica Holdman and Avery Wilks contributed to this story. 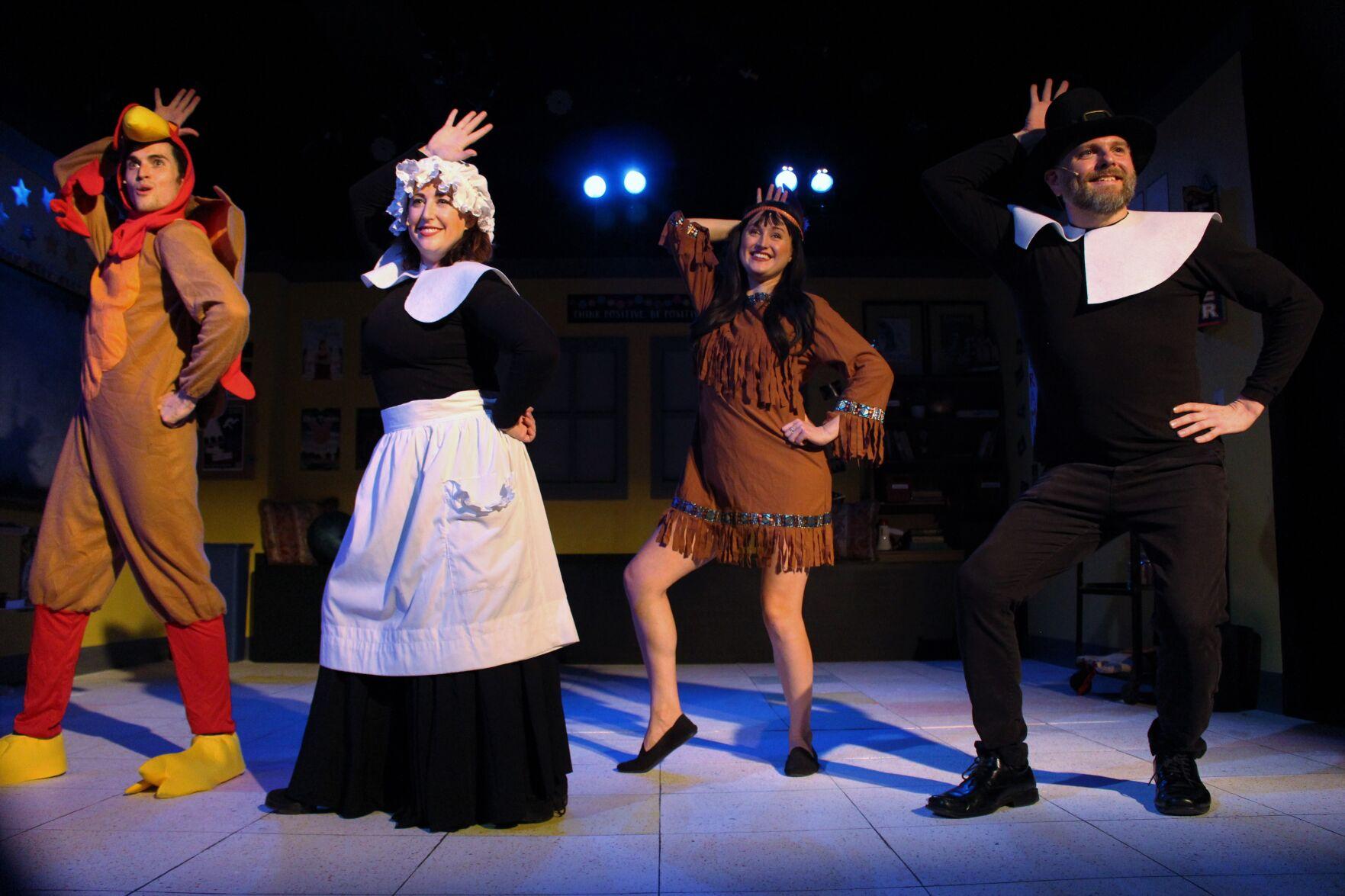 Trustus Theatre's production of "The Thanksgiving Play" can be viewed virtually through Nov. 20. 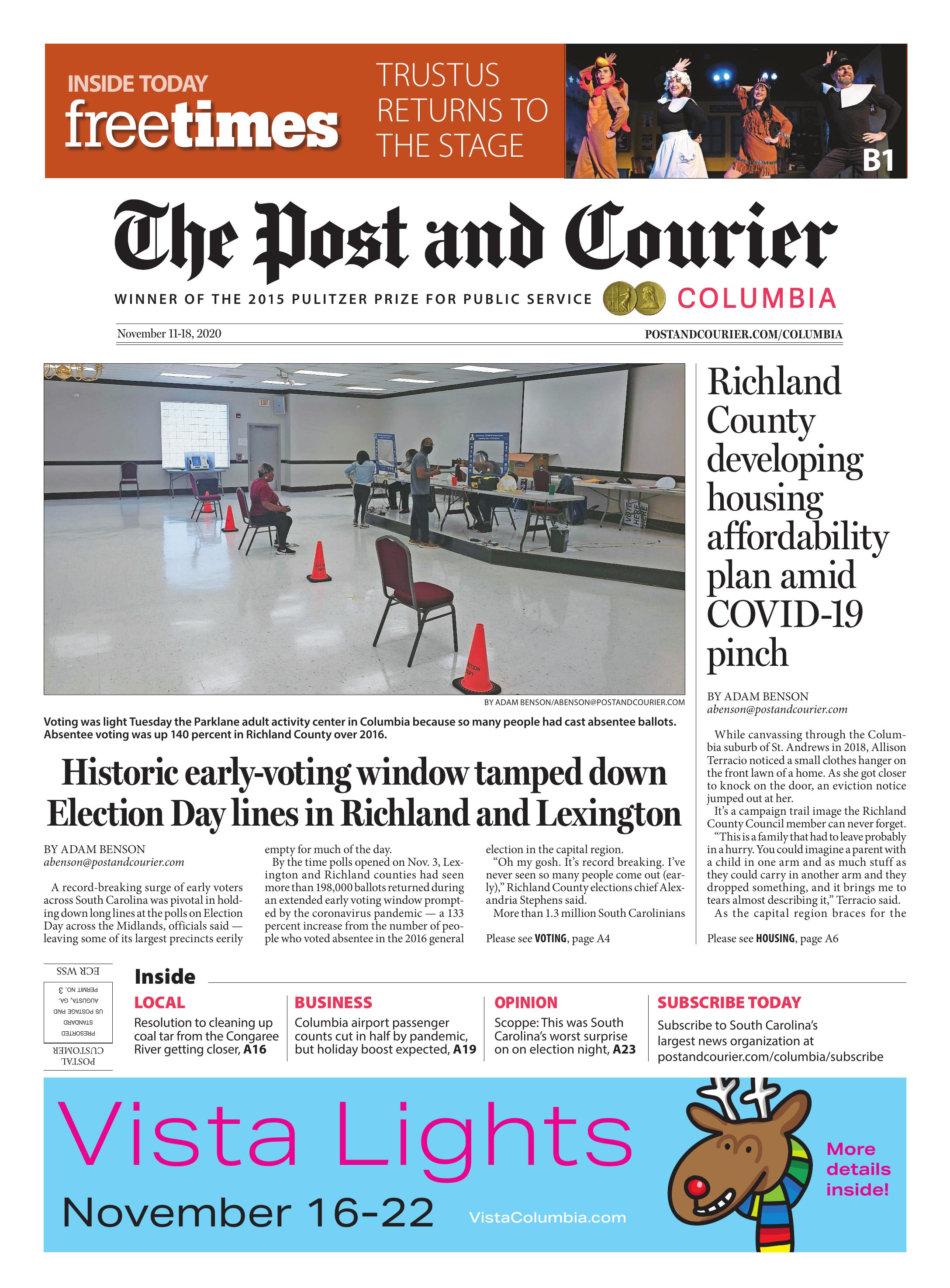