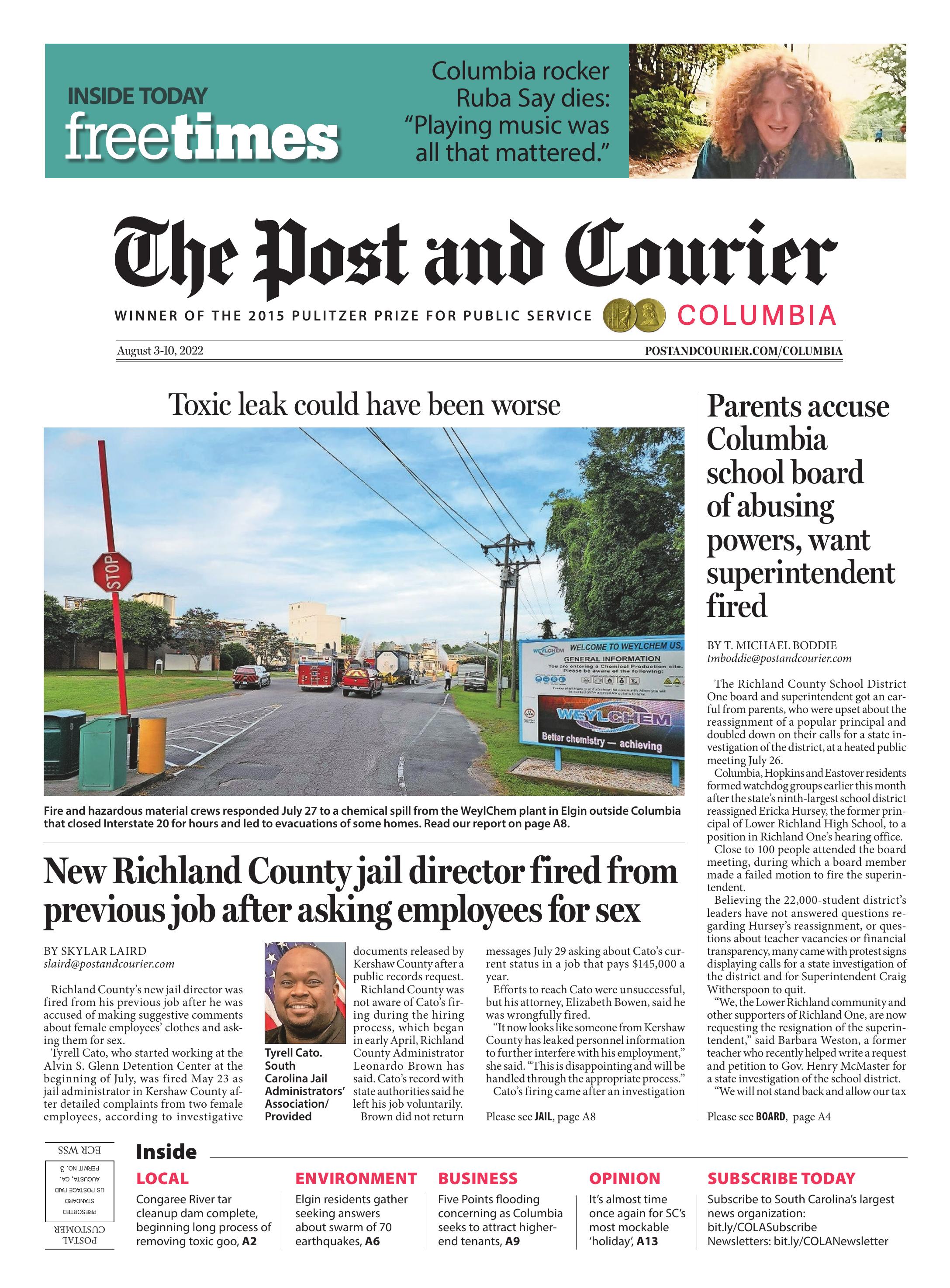 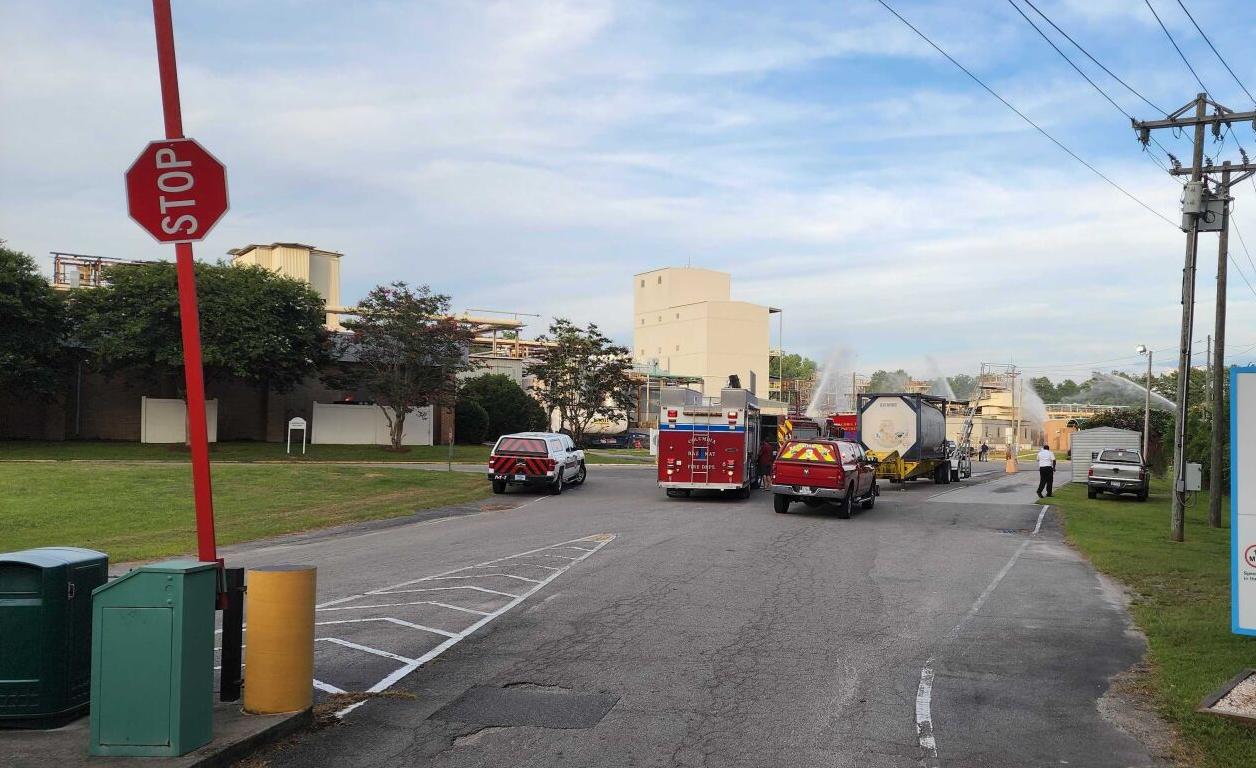 Fire crews respond to a toxic chemical release at the WeylChem plant in Elgin, about 25 miles from downtown Columbia, on July 27. Some residents were evacuated and all lanes of Interstate 20 were closed.

COLUMBIA — Richland County's new jail director was fired from his previous job after he was accused of making suggestive comments about female employees' clothes and asking them for sex.

Tyrell Cato, who started working at the Alvin S. Glenn Detention Center at the beginning of July, was fired May 23 as jail administrator in Kershaw County after detailed complaints from two female employees, according to investigative documents released by Kershaw County after a public records request.

Richland County was not aware of Cato's firing during the hiring process, which began in early April, Richland County Administrator Leonardo Brown has said. Cato's record with state authorities said he left his job voluntarily.

Tyrell Cato was terminated from his last job as Kershaw County jail administrator for an unspecified policy violation before he was hired to run Richland County's jail.

Brown did not return messages July 29 asking about Cato's current status in a job that pays $145,000 a year.

Efforts to reach Cato were unsuccessful, but his attorney, Elizabeth Bowen, said he was wrongfully fired.

"It now looks like someone from Kershaw County has leaked personnel information to further interfere with his employment," she said. "This is disappointing and will be handled through the appropriate process."

Kershaw County jail boss Tyrell Cato will take over operations of Richland County's Alvin S. Glenn Detention Center, which has been understaffed and faced several lawsuits alleging mistreatment in the past year.

One female employee detailed graphic sexual comments Cato allegedly made to her in March and April. For three days, Cato said he wanted to have sex with her despite her telling him this was inappropriate, according to employment records provided by Kershaw County.

The employee said in a statement to county investigators that Cato asked her questions about her sexual preferences, including which sexual positions she prefers. He reportedly referenced the fact that she had previously said she had a "wild side," though she said she had been referring to enjoying daredevil activities like off-roading.

Cato asked what she meant when she said she was submissive in her relationship with her fiancé and "began to tell (her) all of the things that came to mind when (she) used the word submissive," according to the employee's statement to the county.

The employee stated that she repeatedly told Cato she felt this was an inappropriate conversation and reminded him she was in a relationship.

Cato asked if she had ever thought of him outside of work and later "said it may be only once but he will have (her)," according to her statement.

Both women accused Cato of making suggestive comments about their clothing.

People with mental illnesses who are detained at Alvin S. Glenn Detention Center suffer from brutal conditions that are unconstitutional and cruel, a federal lawsuit alleges.

He told one employee that he loved when she wore dresses "so that he could see (her) legs because he knows what those legs lead to," according to county documents. Cato commented on the tightness of another employee's pants in a way that made her uncomfortable, she wrote to investigators.

One of the employees said she later changed jobs to a different county department because she was uncomfortable working with Cato.

Cato denied the women's stories in a response to the county's investigation. He said one of the employees had made sexual comments to him about her relationship, and he had remained professional in their interactions. He hugged her to comfort her and let her know her skirts could be revealing, according to his response.

Three Kershaw County employees submitted statements to investigators saying they had never seen Cato act inappropriately toward anyone in the department.

Cato appealed his firing with Kershaw County's Grievances Committee on June 28. The committee upheld his termination.

The next week, Cato began working for Richland County, which needed stability at its jail after a recent riot, a prisoner's death and complaints about overcrowding and understaffing.

Cato's records from the S.C. Criminal Justice Academy state Cato left his job voluntarily June 24 because he was offered a new position.

The records were submitted by Detention Center Lt. Ervin Whack, who also submitted a statement to Kershaw County defending Cato.

“I have known and worked with Tyrell Cato for ten years and have always found him to be dependable, efficient, and unfailingly punctual,” Whack wrote. “In fact, I have never worked with a person who gives as much attention to detail as he does.”

Kershaw County Administrator Danny Templar said he had submitted a report to the Criminal Justice Academy, which tracks law enforcement officers' employment, saying Cato had been fired. He said he did not know why Cato's record said differently.

Richland County officials did not call Kershaw County for a job reference, Templar said. He wasn't necessarily surprised, because Cato had a strong reputation in the law enforcement community.

Part of the Kershaw County records included an anonymous letter to Richland County Council Chairman Overture Walker dated July 4, two days after Cato started his new job. The letter pointed out that Cato had been fired and asked whether Richland County had appropriately vetted him.

Walker said he received the letter July 26 and gave it to the administration.

Walker said that he could not comment on the issue because it is a personnel matter. 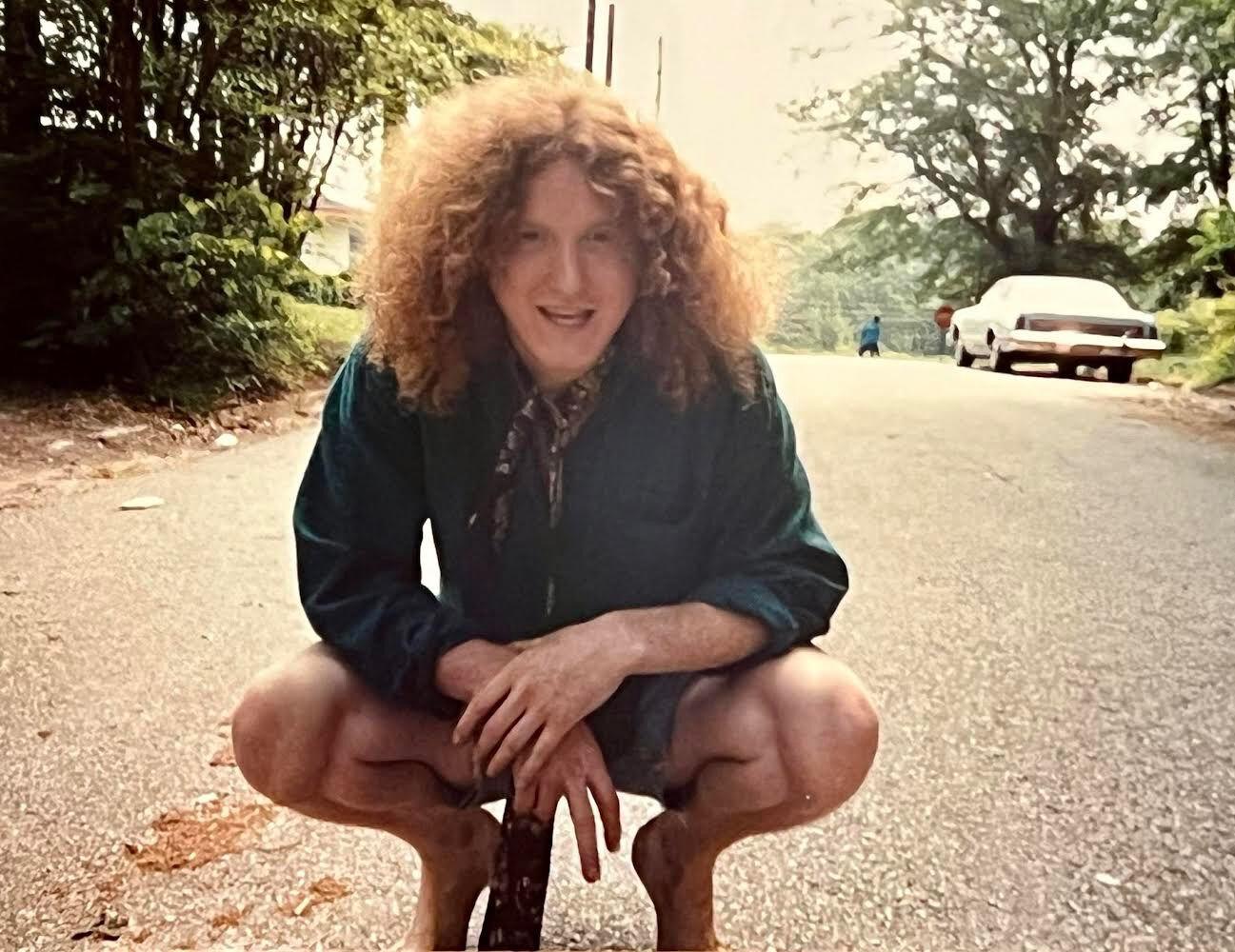