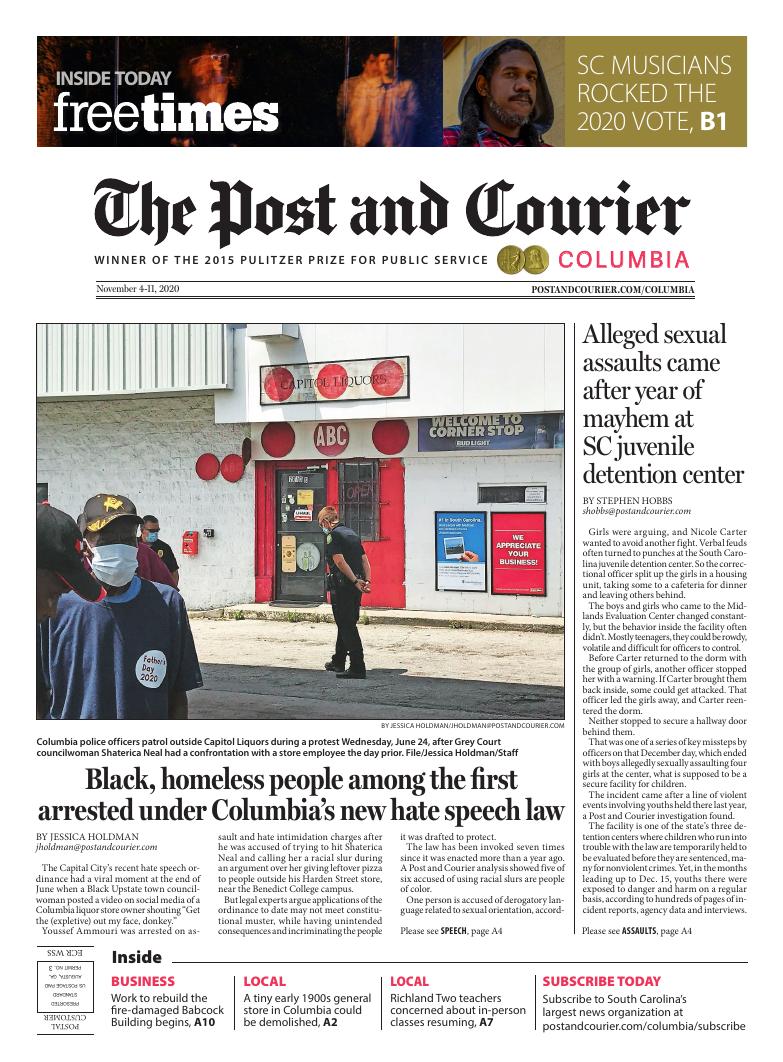 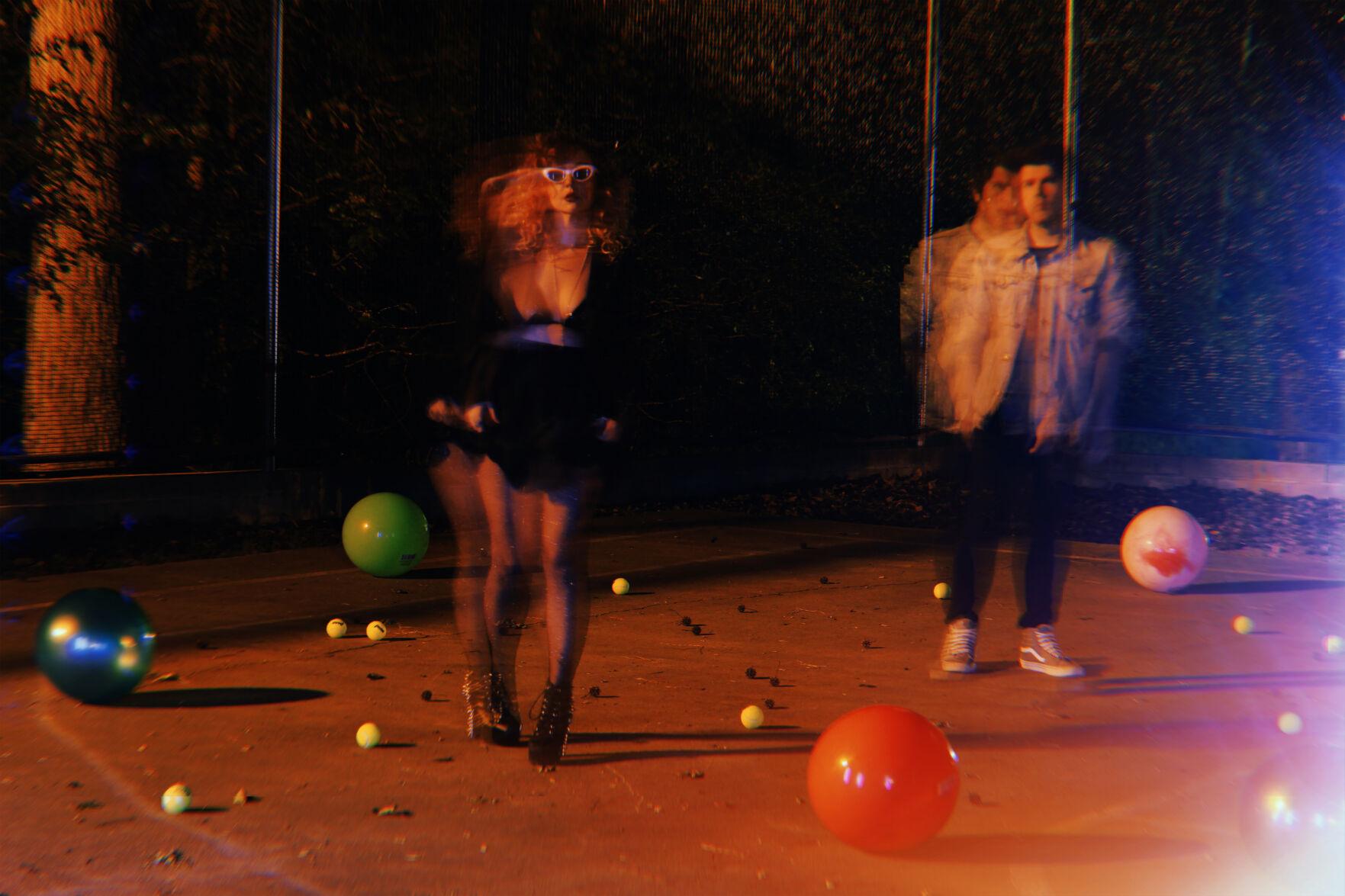 Glass Mansions performed at a virtual concert to try to get people to go vote.

Columbia police officers patrol outside Capitol Liquors during a protest Wednesday, June 24, 2020, after Grey Court councilwoman Shaterica Neal had a confrontation with a store employee the day prior. File/Jessica Holdman/Staff

COLUMBIA — The Capital City's recent hate speech ordinance had a viral moment at the end of June when a Black Upstate town councilwoman posted a video on social media of a Columbia liquor store owner shouting "Get the (expletive) out my face, donkey."

Youssef Ammouri was arrested on assault and hate intimidation charges after he was accused of trying to hit Shaterica Neal and calling her a racial slur during an argument over her giving leftover pizza to people outside his Harden Street store, near the Benedict College campus.

But legal experts argue applications of the ordinance to date may not meet constitutional muster, while having unintended consequences and incriminating the people it was drafted to protect.

The law has been invoked seven times since it was enacted more than a year ago. A Post and Courier analysis showed five of six accused of using racial slurs are people of color.

One person is accused of derogatory language related to sexual orientation, according to court records. None of the records identify the race of the victims or the exact language used to trigger the charge.

One person was recently convicted of the crime. But lawyers for some of those charged question whether policing of the new rule has been overly aggressive or it violates free speech protected under the First Amendment.

Ammouri maintains his innocence and is seeking a jury trial.

″I’d rather entrust six people to pass judgment on it than just go before a judge,” Roberson said.

Columbia's ordinance criminalizes discriminatory speech based on disability, race, religion, gender, nationality and sexual orientation used during commission of another crime that proves the crime was committed out of bias.

When City Council unanimously passed its ordinance in September 2019, Councilman Howard Duvall said it was done to preserve evidence of hate-driven offenses in a state with a Legislature that has not passed a hate crimes law — one of three in the nation without one.

Duvall said that of those facing hate speech charges to date, Ammouri's case appears closest to the use council had in mind when they passed the ordinance.

A Columbia liquor store employee was arrested on assault and hate intimidation charges Wednesday after a Black Upstate town councilwoman complained that he tried to hit her and called her a racial slur during an argument over her giving leftover pizza to people outside the store.

Yet with two of the accused listing homeless shelters as their addresses, its use also appears to be sweeping up at-risk populations.

"If that is happening, it is an unintended consequence," said Duvall, who was not familiar with all of the cases.

Christopher Anderson, a Black man who listed a homeless shelter as his address, was found guilty on Oct. 21 of hate speech and resisting arrest and fined by Columbia Municipal Judge Carlton Bagby.

On April 14, police were called to Prisma Health Richland hospital campus around 3 a.m., where Anderson spat, swore and made racist comments toward Richland County paramedics and Columbia police officers who responded, according to police reports. He clenched his fists and appeared ready to fight, and kicked and pushed a White officer.

The same officer was involved in a second, separate arrest for hate speech. Rickey Smith, another Black man who listed a homeless shelter as his address, was believed to be under the influence of drugs while begging on a street corner along North Main Street on May 12, according to police reports.

While on patrol, the officer saw Smith in the roadway, weaving between cars and slowing evening rush-hour traffic. Smith ran when he saw the officer, according to police reports.

When the officer caught him, the two wrestled to the ground, with Smith accused of balling his hands into fists while atop the officer, police reports say. Reports say he used unidentified racial slurs toward the officer, who is White, and threatened other bystanders. He also allegedly hurled similar slurs and threats at medical staff when taken to the hospital.

The question the judge will have to answer about Smith and others is whether their speech was a "true threat."

Columbia's hate speech ordinance uses the common language “intent to intimidate,” and according to First Amendment scholar David Hudson, is likely modeled after a statute largely upheld by the U.S. Supreme Court.

Hudson, who works at the Newseum Institute at Vanderbilt University in Nashville, Tenn., cited the case of Virginia v. Black, often called the cross-burning case. It involved two cross burnings — one at a Ku Klux Klan rally and the other in front of a Black person's home — where Klan leader Barry Black was challenging Virginia law that banned the burnings. The justices ruled that when cross-burnings were done to be intimidating, it represented a “true threat" and could be outlawed.

Winthrop University followed through with the hiring of a new education professor who faced an internal review last month following a social media post containing threats to out teachers who express anti-Black, pro-police sentiments.

The statute works by tying racist speech into that category, Hudson said, meant to frighten someone to the point they believe they will be seriously harmed.

"This should mean that not all racist language will fall under this provision," he said. "For example, a stray slur may not qualify.”

But because it is a law that criminalizes speech, Hudson said that makes it susceptible to misuse and selective prosecution.

Days after Ammouri was arrested, a White man, Joseph Markowitz was charged with hate intimidation and public disorderly conduct for allegedly shouting racial comments while driving by demonstrations being held outside Ammouri's business by mostly Black protesters.

Police reports do not divulge what was said, but Duvall said tacking a hate speech charge to non-violent crimes where victims might not feel threatened was not what he had in mind when he voted for the law.

By contrast, there are cases where prosecutors may argue victims felt at risk of being hurt.

Police were called on the afternoon of June 25 after workers at Columbia's Assembly Street post office reported a man was causing a disturbance and calling them derogatory, racist names.

Then there was Rebecca Roberts, a Black woman who was charged with assaulting three people by hitting them with a walking stick.

The University of South Carolina, the city of Darlington and Richland County School District One are among organizations statewide firing workers, expelling students and launching investigations after a rash of racist social media responses to the weekend protests over police violence and the death of George Floyd in Minneapolis.

The incident took place the evening of Aug. 2 at Memorial Park, a state-owned park that houses statues in remembrance of South Carolina's Vietnam War veterans and World War II Holocaust survivors. Roberts and another man are accused of approaching a group of people calling out racial slurs before the assault, which required them to receive medical attention.

The first person to be charged under Columbia's hate crime ordinance was Kenya Jenkins.

Jenkins, who is Black, is accused of making derogatory remarks toward a man about his sexual orientation while police spoke with him on the evening of April 6 at the corner of Marion and Calhoun streets.

Jenkins is not facing charges for any other related crimes, meaning the case doesn’t meet the ordinance and could be thrown out.

"I'm going to challenge the constitutionality of the statute in terms of how the city is attempting to use free speech as a mechanism to try to control other activities," he said. 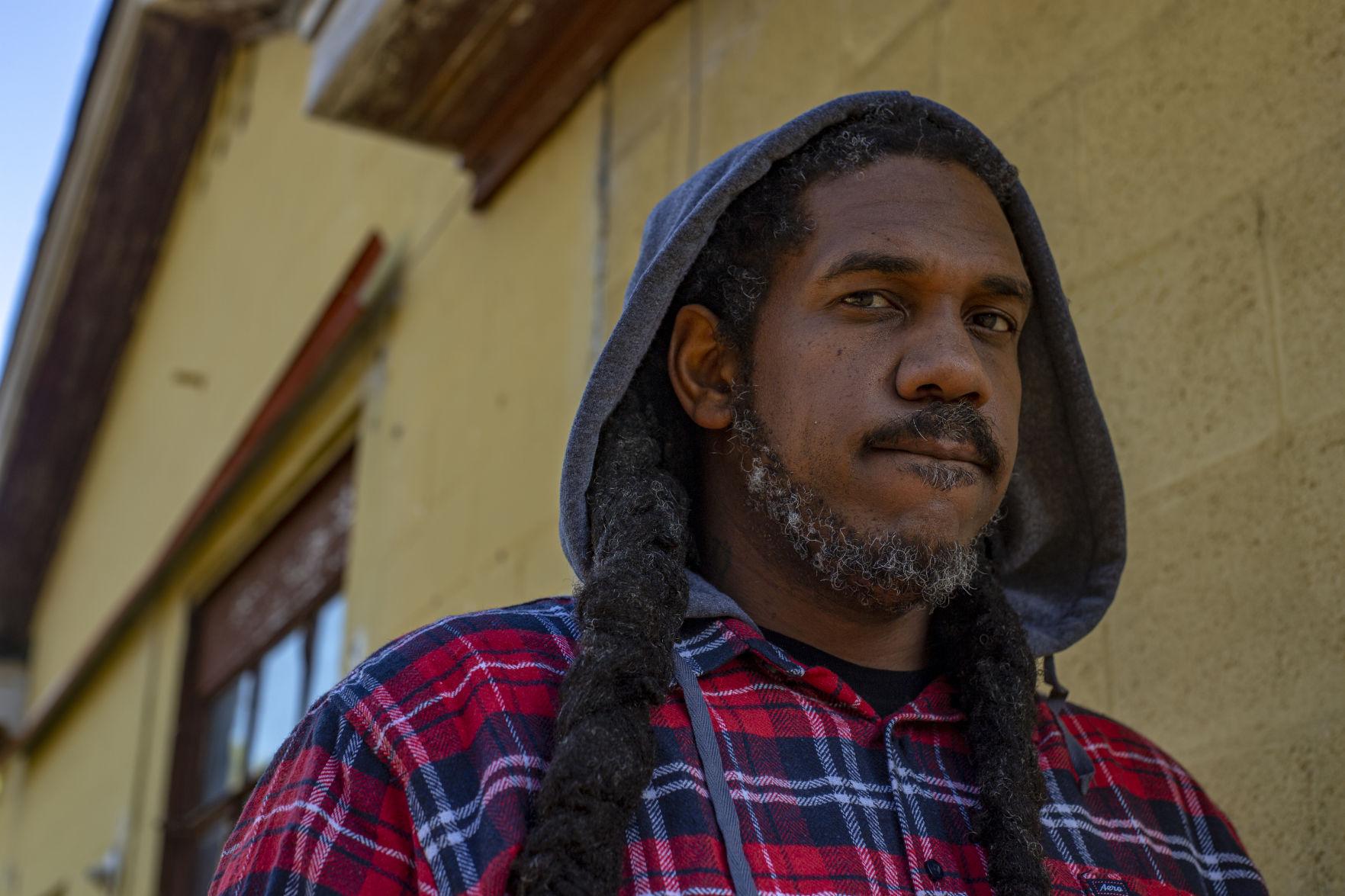 Fat Rat da Czar was one of the South Carolina performers in the iVoted campaign virtual festival. 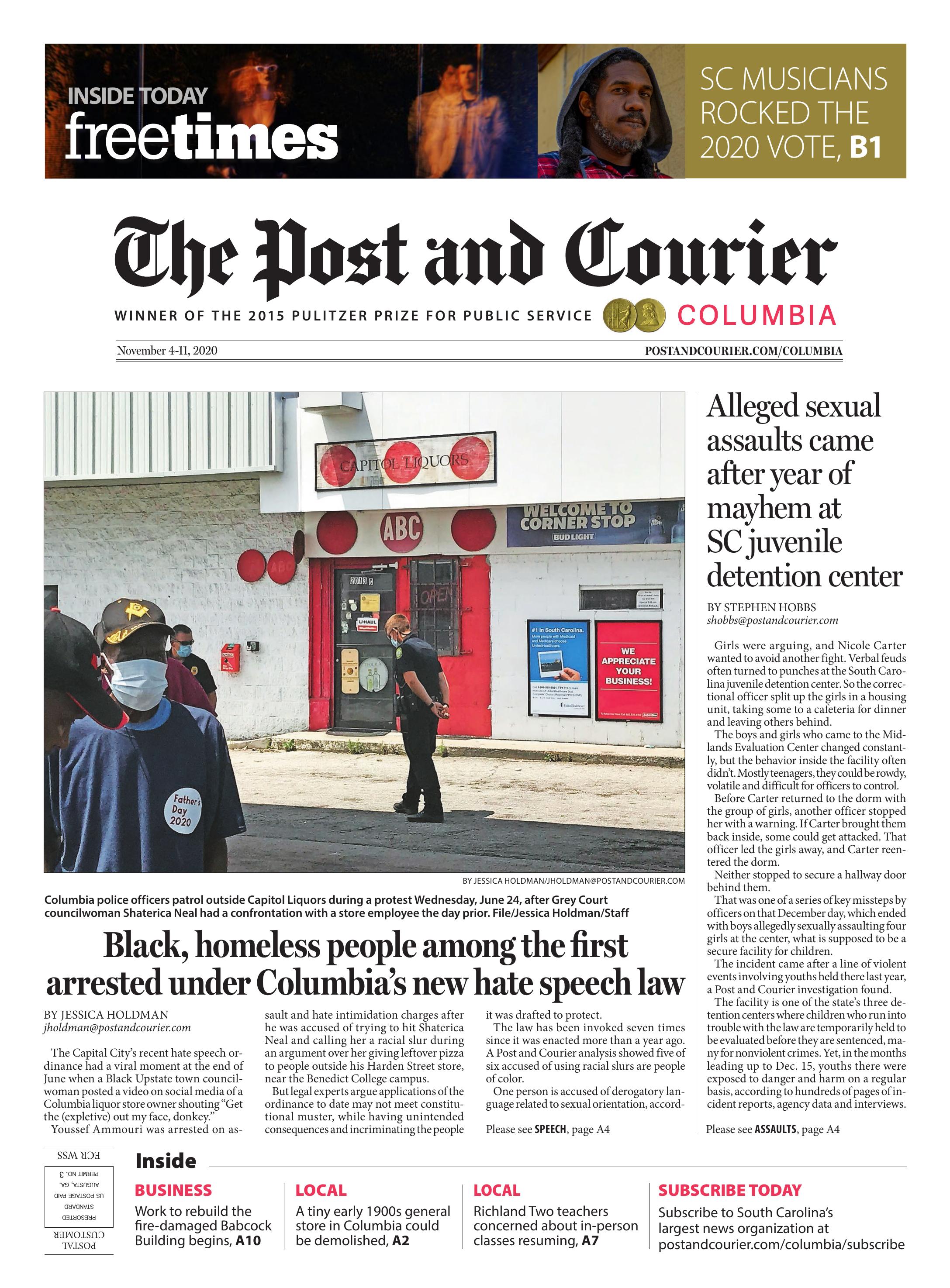