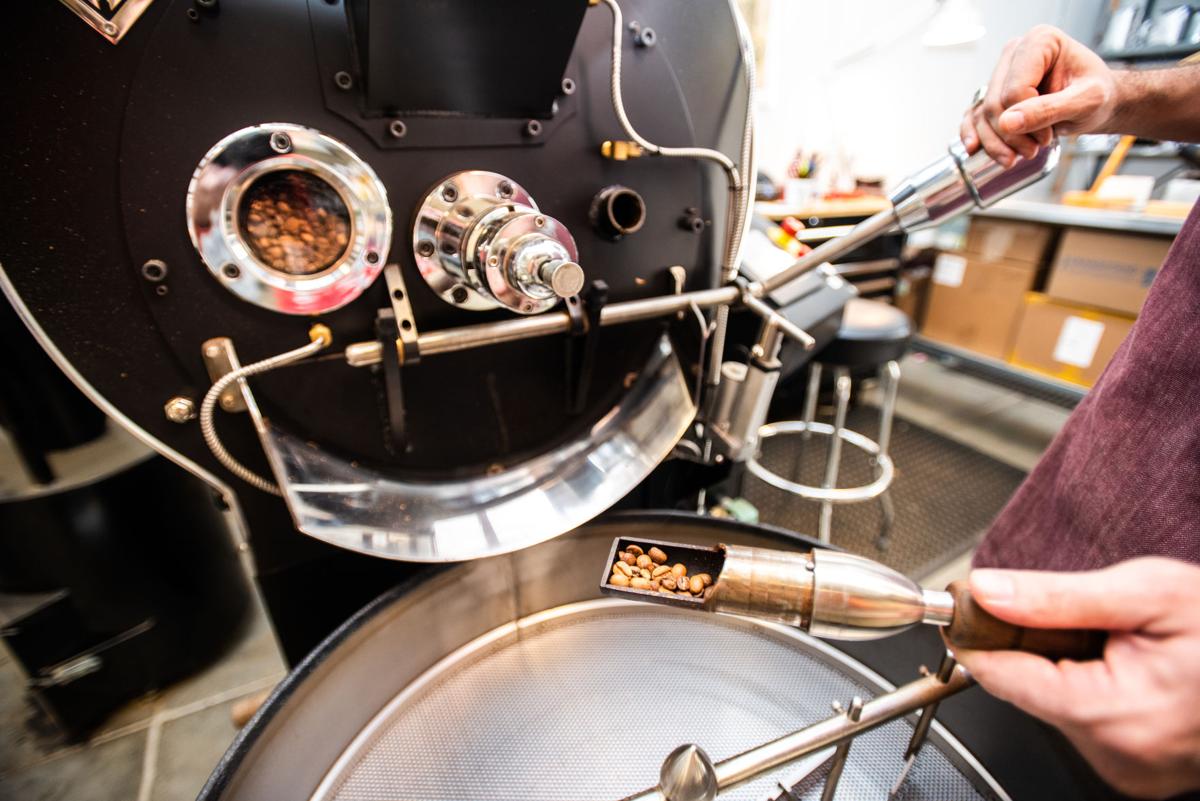 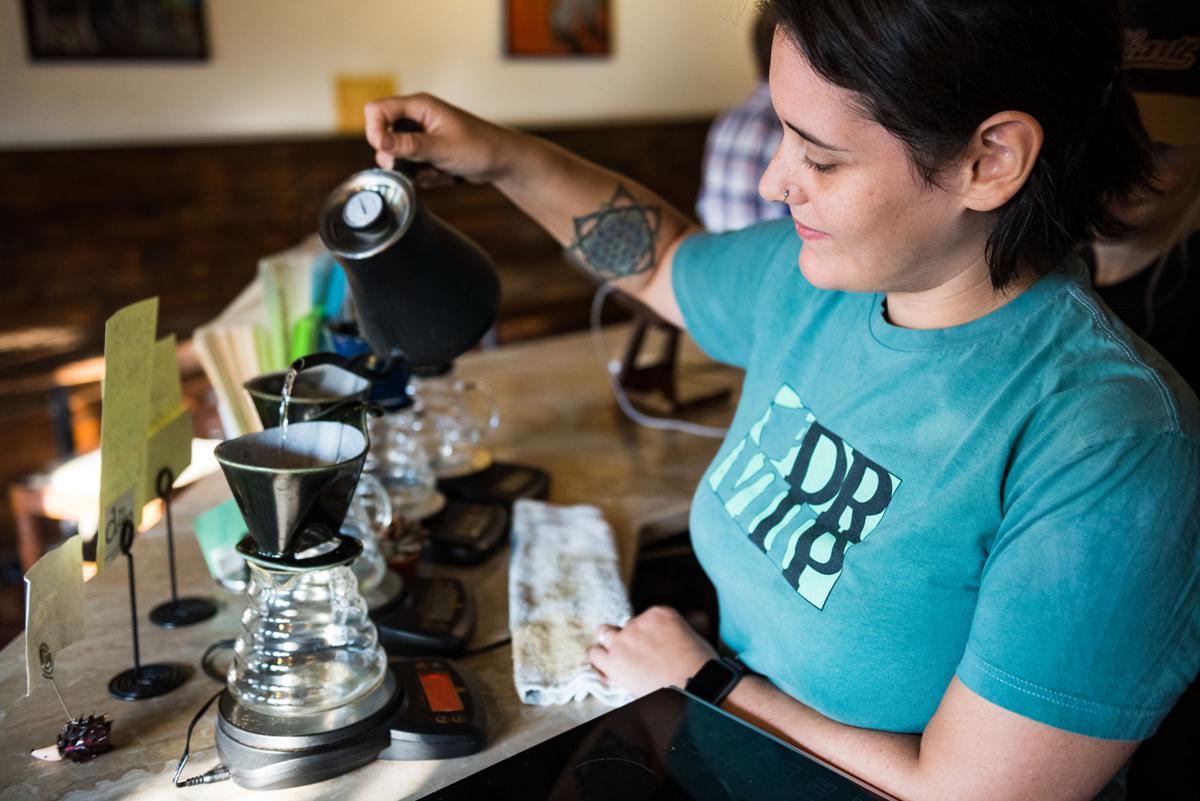 On a December morning, Beach Loveland occupies his typical post — standing over his coffee roaster as it fills an industrial room with a smoky, unmistakably caffeinated aroma.

It’s a surprisingly tranquil scene. The owner and roast master at Loveland Coffee quietly monitors his softly rumbling machine as its heats the beans. He takes time to log numerous measurements in a computer database, monitoring his product’s variables over time, helping maintain consistency.

Based near Irmo, Loveland has grown his company slowly. Starting with a drive-up coffee stand in 2012, and opening his roastery in 2016, he now has plans plans to open his first full-sized shop and a new roasting facility in the same building next year, adding to Columbia’s burgeoning coffee scene.

“The process, the artisanship that goes into making a cup of coffee, it fit into my creative mindset, “the Specialty Coffee Association-certified roaster tells Free Times. “And we saw the need for roasters in Columbia.”

Loveland joins other local businesses like Indah Coffee that pair a coffee shop with in-house roasting. The two reside alongside shops like Drip Coffee and Curiosity Coffee Bar that bring a widely varied lineup of pre-roasted beans from around the world.

The reasons behind local shops decision to roast or not roast vary.

Bringing the process in-house gives local caffeine slingers a level of control that they don’t get when purchasing pre-roasted beans. Loveland explains that when roasting his own beans, he weighs variables like what heat level to use at what point in the process and how much air circulation is needed. It’s essentially thermodynamics.

“We’re trying to build a recipe to bring out the best flavor we can out of the coffee,” Loveland says.

But with that control comes a tradeoff. Loveland manages other factors that a traditional coffee shop might be able to eschew — things like establishing a supply chain with farms and importers and finding storage space for supplies and inventory. There’s also other barriers — such as startup costs of beginning to roast, reaching a volume point where it makes sense to start roasting and developing the skill set to do it.

Sunk costs aside, even the commonly cited benefit that a fully functioning roastery will yield finished beans at a lower price than buying them pre-roasted can also be misleading.

“The temptation is to be, ‘If we could just roast our own coffee we will save 40 percent on our coffee expense,’” Loveland posits. “But at the same time, you’re increasing 80 percent of your effort to do so.”

Finding the beans is another issue, says Sean McCrossin, who opened the first of his two Drip Coffee locations in Columbia in 2011, explaining that sourcing unroasted beans of a reliably high quality can be difficult and cost-prohibitive.

He says there are three major roasters — Counter Culture, used by Drip, along with Intelligentsia Coffee and Stumptown Coffee Roasters — and that they have already established longrunning relationships with farmers. Competing with those relationships can be difficult and leave roasters with good, not great, beans.

“They’re getting the best beans in the world,” McCrossin explains. “It takes years to become a good roaster and even … if you have a lot of money, you’re still buying [beans] from a warehouse.”

He says the decision to roast largely comes down to a tradeoff — control over the roast in return for settling on a lower bean quality.

“I think it’s admirable to roast and I think, certainly, you could still be a roaster roasting your own beans and … still have a delicious cup of coffee,” McCrossin posits.

While established roasters may have easier access to high quality beans, Loveland says his own coffee is “right up there.” The consideration between bean quality levels is more of a market-specific decision than a sourcing issue for him.

Before Columbia’s Curiosity Coffee Bar opened in 2017 at 2327 Main St., co-owners Sandra Moscato and Greg Slattery had plans to roast their own coffee. The duo even roasted beans at home on their grill in two steel colanders and took a roasting course through 1,000 Faces Coffee in Athens, Georgia, now their main supplier of beans.

But the duo unexpectedly were admitted into a business startup accelerator program through the University of South Carolina that required them to interview industry professionals. Through that, the two heard the same refrain — start small with a shop, then grow into being a roaster.

But the duo didn’t go that direction, in part due to the upfront costs and challenges: the price of buying a roaster you won’t outgrow quickly — at least $10,000 — and finding a space to house the beans while also breaking into the crowded small-batch coffee market.

“It doesn’t allow you much money to be diverse in your exploring of different origins,” Moscato says.

The two have collaborated with 1,000 Faces Coffee for a special in-house roast, but they say they’re content with sourcing from a variety of countries and offering differing types of coffee.

Drink of the Week: Hazy IPAs from South Carolina's 13 Stripes and Charlotte's Sycamore

To illustrate their approach, Slattery and Moscato shared three different types of coffees with Free Times: a natural, unwashed Costa Rican (with strong fruity overtones); a Nicaraguan honey-processed coffee (with strong chocolate flavors and some fruit note); and a smooth and balanced cold brew.

Slattery says this variety has been a boon for their business, drawing “people who like to nerd out on coffee” or others who are interested.

“We find that it’s given us an opportunity to offer a lot more variety and a lot more interesting experiences for our customers,” Slattery offers. “We’ve been able to offer Chinese coffee, coffee from Yemen, Tanzania.”

That’s not to say that in-house roasters don’t offer their own variety. Nick Hauser, owner of Indah Coffee and another Specialty Coffee Association-certified roaster, tells Free Times that in addition to the beverages served at the shop’s two Columbia locations, his company currently packages seven different roasts for customers to purchase and brew at home.

However, he acknowledges the difference between roasting and buying pre-roasted.

“We focused on the roasting aspect of it, a certain amount of time and energy we focus on that direction,” he admits. “Maybe if we were sourcing from elsewhere we could spend more time and energy on other areas.”

For Hauser, deciding to roast was about more than controlling the fine details of his product.

Hauser first grew infatuated with the idea of roasting coffee while travelling in Asia and soon began roasting in Columbia, debuting at local markets and opening his first shop in Cottontown in 2017. When travelling, he seeks out local breweries, restaurants and coffee shops and feels he’s created something similar — a product specific to his city.