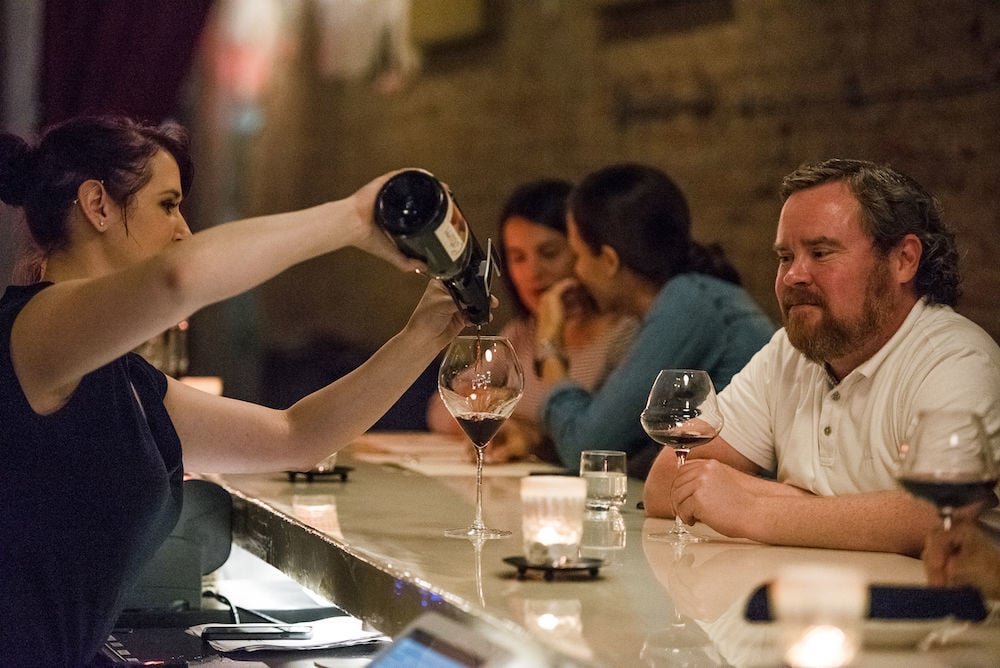 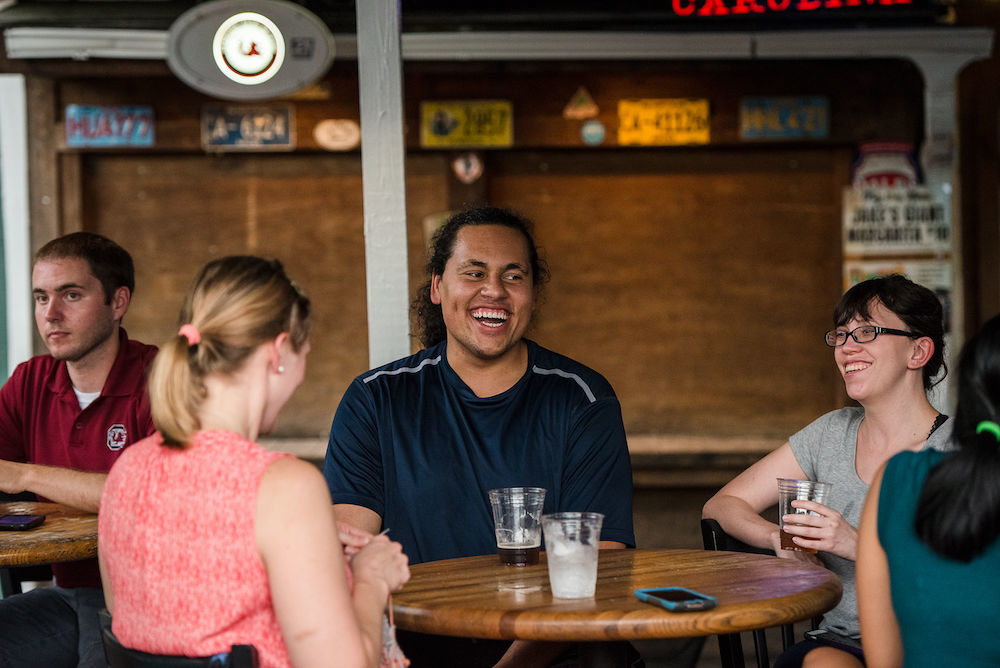 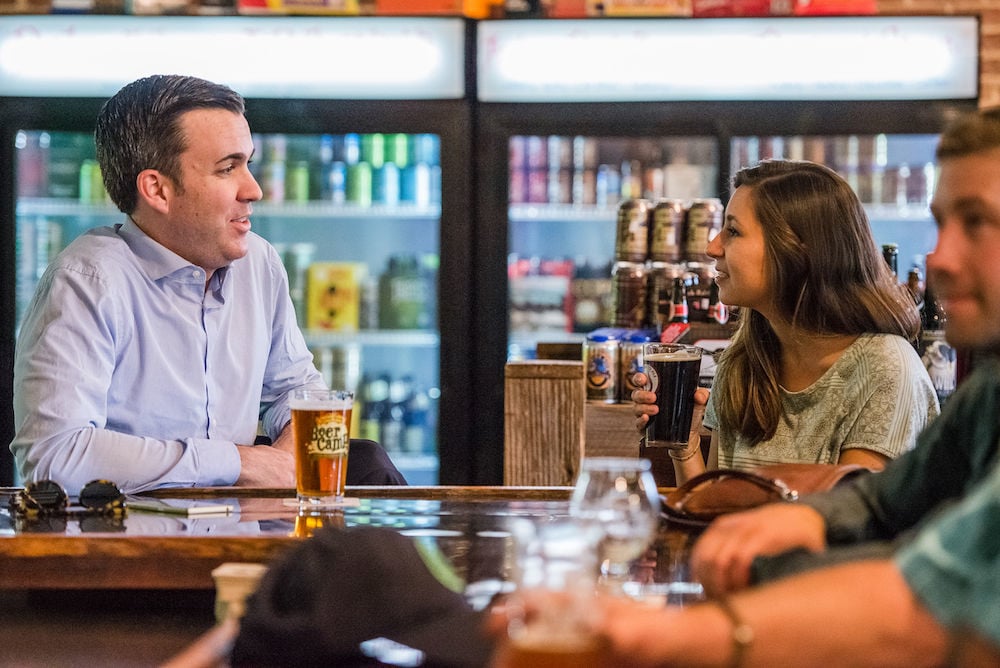 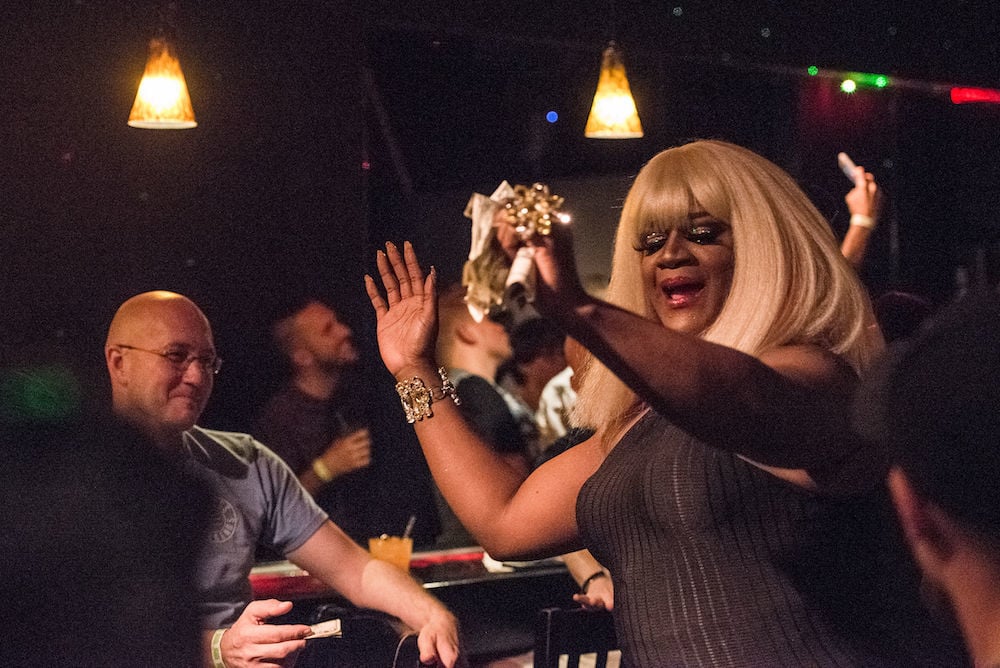 Apparently Columbia was aching for the right kind of cozy, intelligent wine bar: Tim Gardner’s Main Street creation bustles with people from open to close. The modest menu complements the carefully selected wines and beers, and the warm ambience makes you want to settle in for a good long stay.

Yeah, the beer selection — both on the regularly rotating tap wall and in the thoughtfully curated bottle and can selection — is among the best in the Midlands. And yeah, the kitchen menu — including that infamously decadent fried chicken-and-pimento cheese sandwich — features some of the best bar food around. But it’s the welcoming vibe, the sense that you’ve stumbled into a true cross-section of Columbia, that sets this subterranean Main Street bar apart.

The city’s foremost craft bartender is Motor Supply head barman Josh Streetman. Whether he’s experimenting with new trends or concocting a classic, Streetman mans the bar with grace and intelligence.

Best Place to Pick Up Guys

OK, ladies, here’s what you do: Make your way down the stairs and into The Whig. Let your eyes adjust (approx. time: 15-20 minutes). Then find that (likely bearded) guy you just have to have and ask him, “Aren’t you the guy who gets fan mail from Ron Jeremy?” Things will escalate from there. Works every time.

Best Place to Pick Up Girls

We’ve heard that oysters are an aphrodisiac. We’ve seen with our own eyes that Pearlz is a swank hangout, with great jazz multiple nights a week, nice cocktails, and a tasty menu offering more than just oysters. We’re not sure which of these two things makes it a great place to pick up girls, but apparently it is.

Honorable mentions: The Woody, The Whig

Look, just go check it out, OK? You might learn something.

With two big rounds of trivia every Tuesday night, Saucer is your Columbia trivia headquarters. They release the general topics online ahead of time, so you can assemble your ideal team to take on the deadly combo of NHL, Grateful Dead and My Little Pony categories.

Here’s the thing about this popular underground dive bar: It’s a no-frills affair. There aren’t TVs blaring at you from every corner. There aren’t uniformed staffers with “flair” on their suspenders smothering you with put-on niceties. But what it does have is skilled bartenders who expertly and seamlessly work the bar and make sure everyone feels comfortable. It’s what makes The Whig, well, The Whig.

Jake’s is a college bar in that it has a laid-back, student-friendly feel and sits right in the heart of Five Points. It’s more than a college bar in that it boasts a surprisingly creative and tasty food menu, a broad beer selection, and those Yappy Hours that get dog owners and lovers of all stripes and ages into the joint on a regular basis. And then there’s that patio, which is great no matter who you are.

The Woody is an old school dance club. They have shag lessons and themed nights all the time. Recent get-downs have included the Creepy Carnival night, an ’80s shindig and a luau. So here’s the thing. Want to cut a rug? Go to the Woody.

You may have read somewhere recently that The Whig is intimidating and too cool for you. That’s simply untrue. The Whig is a haven for people of all sorts looking to chill out, eat good food and drink good drinks — in other words, a neighborhood bar. If you’re comfortable with yourself, you’ll probably be comfortable here.

Sure, Jake’s has lots of draft beer, and tasty food that somehow appears from the tiniest of kitchens. But what really sets Jake’s apart is its paradise of a back yard and deck. They’ll even let your canine friend romp around there with you.

There are probably some people out there still pining for the old Rockaway’s, before it burned down. But honestly, the new one is pretty great. Put your elbows up on the bar, grab a cold beer, and stare at the sunlight filtering in through the shutters facing Rosewood Drive. Maybe order some pimento cheese fries while you’re at it. Life is good.

An authentic British pub in a strip mall out in Harbison, one that has truly great food and a beer selection that balances traditional favorites with invigorating craft options? Sounds far-fetched, right? Well, what if we told you that bar is also a thriving neighborhood hub, a buzzing, welcoming place whether you’re coming for the soccer on the TVs or just to hang out with friends? Believe it or not, British Bulldog is all of the above.

What makes New Brookland Tavern unique is it feels the same no matter what changes occur. Pretension gets a boot in the chest at the door. Grab a stool, play pool on the most challenging and distinct table in the Columbia area, and always have a drink in your hand. The bartenders are cool folks. The place really is kind of the area’s Paddy Pub with a punk angle.

Old Mill has become an institution in Lexington, with good food, occasional music and an extensive beer and wine list. The Old Mill Brewpub drafts are the main draw, though. Brewmaster Matt Rodgers has conjured a number of favorites, including 12 Mile Oatmeal Porter, Toasty Cocos Brown Ale and the Green Gose. There are good drinks in Lexington.

It’s an unassuming place that’s a reliable watering hole. A place for regulars and those looking for something unique amongst the sprawl. The commute from work deserves a cold one at the end of the line. Henry’s is the place to get it in Northeast Columbia.

Liberty on the Lake

This version of Liberty Tap Room has all the touches you would expect, including a diverse food menu, a deep roster of drinks and regular live music. But one of the key reasons people keep coming back to this location is the stunning “big water” views of Lake Murray from its outdoor deck. The deck at Liberty on the Lake is a great place to let an evening slip away with a cold one.

If robots are people, sure. Maybe this bar draws a bit more of an eccentric crowd, but if you’re an outsider who drops into the Art Bar for a couple drinks, before you know it you’re the one being watched, and you really don’t care. It’s a good place to be people that are watched, whatever that means.

This cool bar strikes a balance between raucous drag venue and chill neighborhood watering hole. It’s right across Assembly Street from the State House, but if you weren’t looking for it, you’d never know it’s there — making it feel like even more of a treasure.

Platinum serves complimentary lunch Monday through Saturday, according to their website. Fascinating.

It’s the town’s best sports bar not because you’re given a sensory overload of televisions, but because they have a tasteful amount of watching spots along with a unique menu of pub food and beer choices. The Harbison-area tavern is one of just a couple bars around town dedicated to international soccer. Most any game you’d like to see you can grab a stool and watch.

You’ve had a long day at work. The boss is breathing down your neck about those reports, the guy in the next cubicle went heavy on the cologne, and someone clogged the toilet in the shared bathroom. When it’s time to knock off, you just want to go somewhere where the tacos are spicy and the beer is more than cold. Cantina 76 is your spot.

They have more than 200 beers. That’s a lot of different flavors of brew. From Abita Root Beer to Young’s Double Chocolate Stout — within that alphabet is the key to the world’s secrets.

The selection at this Devine Street hangout and bottle shop isn’t necessarily the most expansive, but the tightly curated shelves and quickly rotating tap selection put as big a priority on freshness as diversity, ensuring that whatever great beer you find will taste as good as it did when it left the brewery.

When the sun’s beating down Midlands-style, head over to River Rat Brewery for some cold Twisted Lemon Wheat. It’ll fix you right up.

River Rat has rock-solid flagship brews — that refreshing kölsch, that full-bodied hazelnut brown ale — but that doesn’t get in the way of their adventurous spirit: Some enticing inclusions at the brewery taproom as Best of Columbia went to press included a Tabasco Saison and a Sour Cherry Sucker Punch ale. Just like a good local brewery should.

Their rum has a distinct flavor that snaps in a Cuba Libre. A clean flavor with the right amount of florals wafts off the Bulle Rock Gin. They get wild with spirits like their Copper Horse Hot, a vodka infused with The Ghost Pepper and the Carolina Reaper, as well as tastes like their Pecan Praline whiskey sweet cream liqueur. Your favorite watering hole tastes better when supplied with Copper Horse Distilling.

It’s Columbia-hot outside, humidity making the pits of your shirt look like they pissed themselves. A margarita is in line. No place does a simple version of the Tex-Mex drink better than Cantina. Get a pitcher of Strawberry Basil Margs for day drinking, following it up at night with some of their titular fresh lime juice and agave nectar libations.

Cafe Strudel takes Bloody Marys so seriously that they actually infuse vodka with bacon for one of their drinks. Yes, it’s ridiculous. Yes, it kicks ass, a smoky complement to the drink’s spicy kick.

Bourbon bartender extraordinaire Kat Hunter always has some new cocktail recipe churning in her brain. Look toward the bottom of the drinks menu for her seasonal offerings.