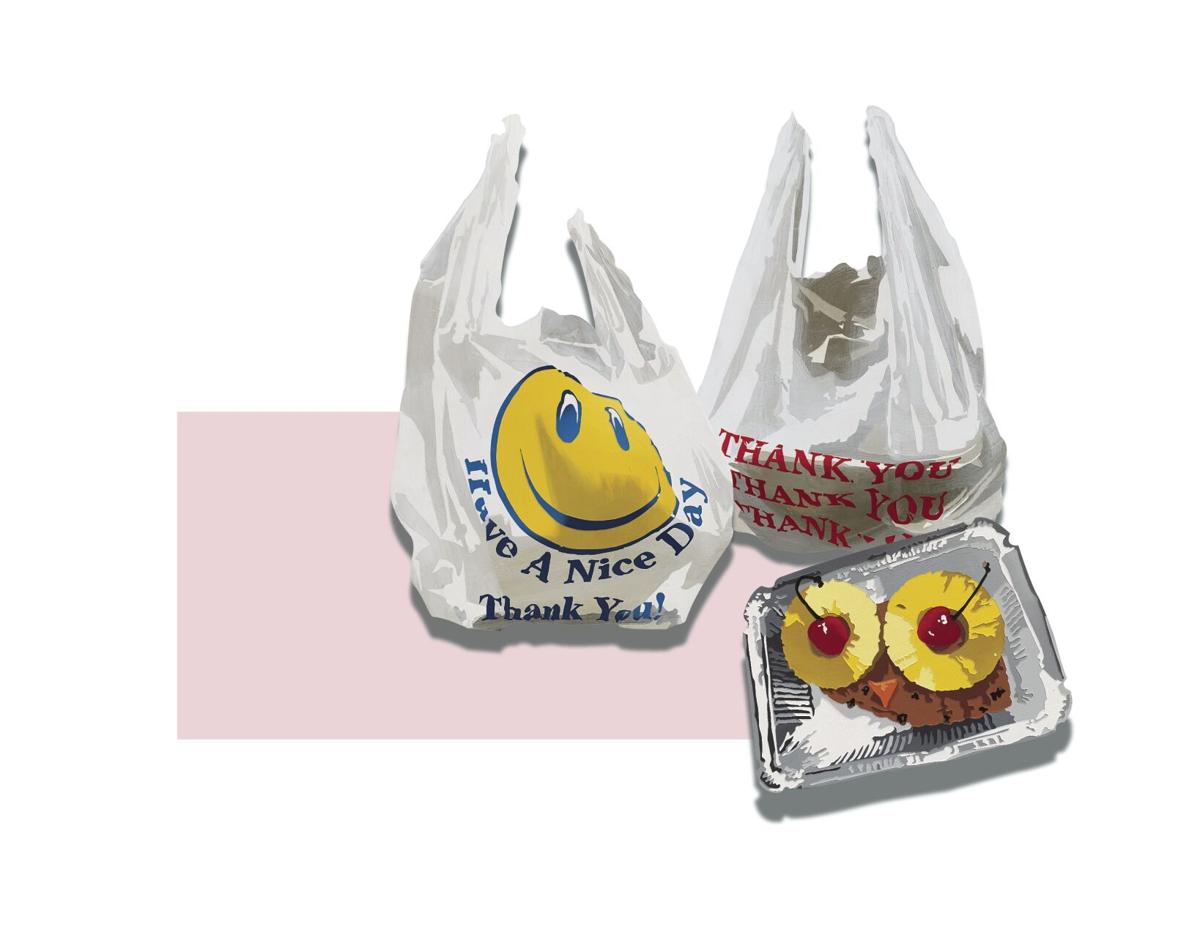 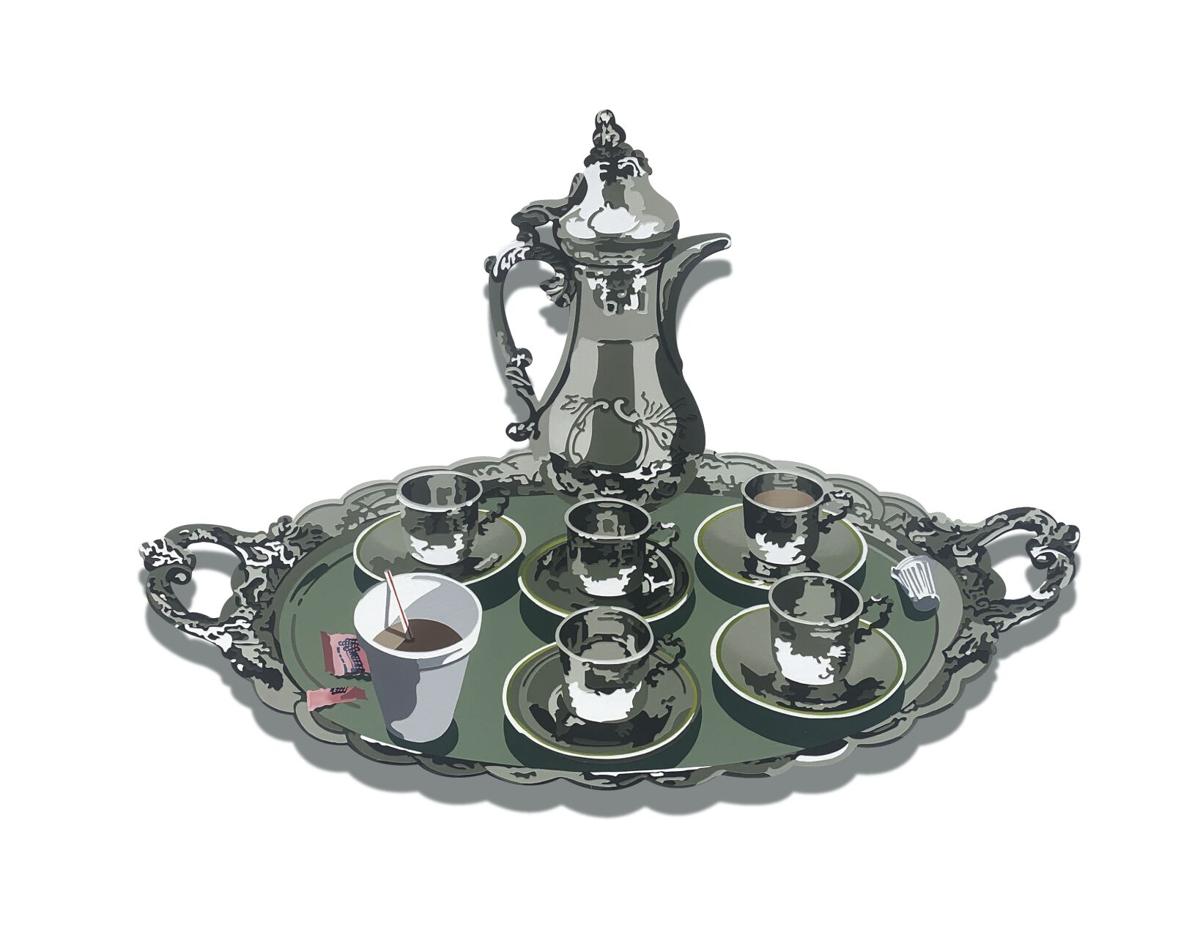 Food has been on Lori Larusso’s mind since she was a child. The award-winning Louisville artist has spent 20 years creating paintings and installations that deal with the role that sustenance plays in society.

Larusso’s new exhibition at Columbia’s 701 Center for Contemporary Art, “Feast & Foe,” continues her exploration of how food, its preparation and presentation differ between socio-economic groups and change over time.

Larusso said that the title refers to contradictions.

“Friend or foe, feast or famine,” she offered. “Both point to contradictory ideas. You have a lot, or you have none. You’re either a friend or an enemy. When I think about the work, a lot of it exists in this place between two extremes, so I thought that was appropriate. Something can be good and bad for you at the same time, it seems like an interesting juxtaposition to include food and something that could be unfriendly in the same space.”

When “Feast & Foe” opened on Jan. 14, Larusso gave a virtual guided tour, showcasing the wide variety contained in her paintings — ranging from surreal (a poodle made of broccoli) to concrete (stacked plates and old-school Tupperware containers).

There are full coffee mugs, partially eaten sandwiches, orange slices and much more that seem to leap off of the walls at 701, where Larusso recently completed a residency.

“As the person who’s making the work, I have to reflect my own upbringing,” said Larusso, who earned her MFA from the Maryland Institute College of Arts. “I grew up in a rural midwestern town, and my parents were both very health conscious and budget conscious. So as any kid would, you start to develop these ideas about what you’re allowed to eat, what you’re not allowed to eat, what’s considered healthy, what’s considered unhealthy, and you form these dichotomies around good or bad, delightful or disgusting, fancy or trashy.”

“What I’m interested in is the context,” she explained. “There’s something that one community might think of as desirable while someone across town would not. It’s that kind of dissonance or contradiction, opposing ideas existing at the same time, that I find interesting.”

One of the most striking sections of the exhibit is a grid of 40 paintings that Larusso pulled from 20 different social media posts from her friends. Paintings of food and drink are mixed with text messages like, “I cleaned house all day, I deserve this ice cold can of champagne at 4:30 in the afternoon.”

“It’s a large piece that speaks to the idea that we put stuff out there, both as individuals and collectively that presents a certain identity,” Lurusso offered. “If you identify as a vegan, you’re going to post stuff that confirms that identity in a public facing capacity. I think that it speaks a lot to how we view each other, how we view ourselves.”

Despite the challenges that the pandemic presented, Larusso said she enjoyed her residency at 701 because she had a lot of room and a lot of time.

“it’s a great space,” she reflected. “I love it. Great light, great big walls. It was nice to have the time and space to focus. It’s hard to say how it might have been different if not for COVID. I haven’t met as many people as I probably would have, but I didn’t expect to have a ton of social interactions while I was here. The isolation and time and space to work is what I came here for. I hope I made the most of it.”

Larusso said that ultimately, she would like people to walk away from “Feast & Foe” with a different perspective on something that’s part of their everyday lives.

“I would like people to examine their relationships with food,” she concluded, “and how they reflect their identities or judge others based on their own systems of beliefs that they’ve built for themselves.”