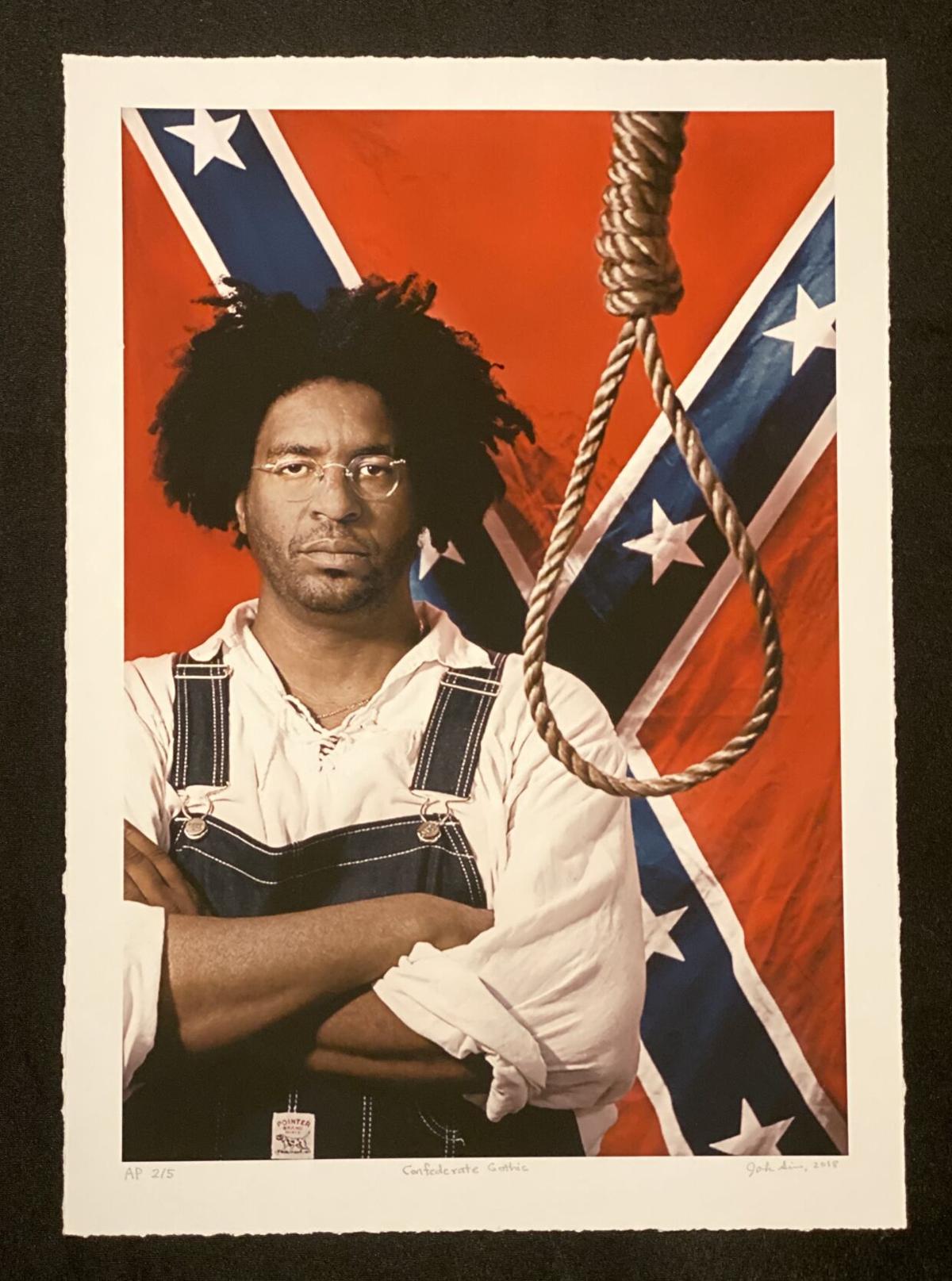 John Sims is pictured in his piece "Confederate Gothic." The artist has spent 20 years fighting the symbolism of Confederate flags by recoloring and recontextualizing them. Provided 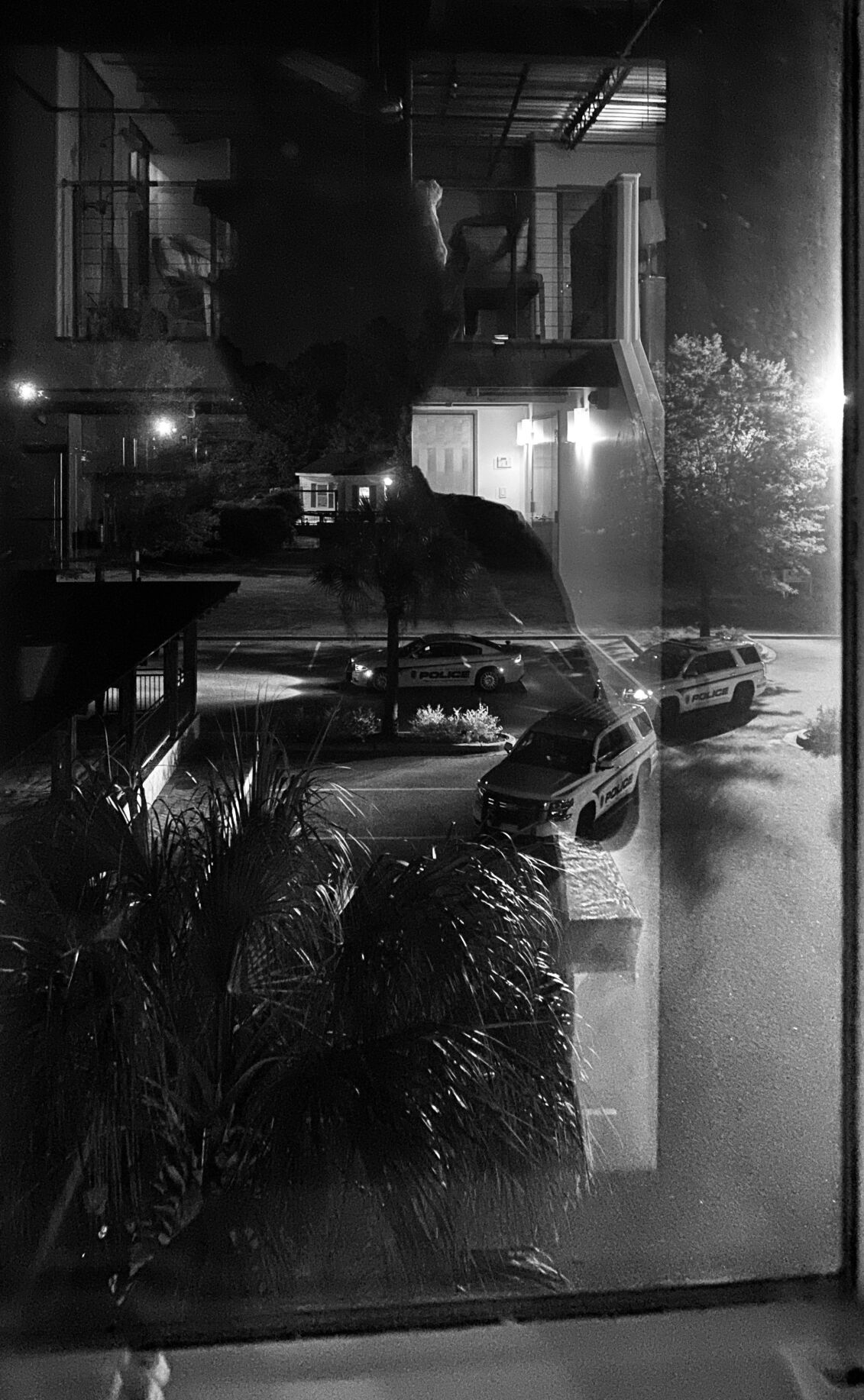 A picture John Sims took of police cars outside his loft at the 701 Center for Contemporary Art on May 18, which he has titled "Near Death Residency: Portrait of an Artist/Space." Provided

A Black artist-in-residence at a Columbia gallery says police officers burst inside his provided apartment with guns drawn while he was in bed and offered no explanation before detaining him in the early morning of May 17.

“Before I can explain anything, they got me in handcuffs,” said the artist, John Sims, whose art attacks the symbolism of the Confederate flag.

“(An) officer noted that the door is usually secured especially after business hours,” Columbia Police spokeswoman Jennifer Timmons said in an email exchange. “Making sure that there was not a crime in progress or anyone in distress, the officer notified central dispatch of his intention to search the building.”

Police entered the center after an officer noticed an open door leading to a side entrance just before 2 a.m. on May 17, Timmons said May 20.

In Columbia, John Sims looks back on 20 years spent transforming the Confederate flag

They yell for anyone inside to come out with their hands up. Sims yells out "What's up?" when they reach the living room below his lofted bedroom. Officers shout out to see his hands.

Sims asks officers for identification, which they ignore. Officers climb the stairs and order Sims to face the wall and tell him to stop resisting as they handcuff him.

Sims tells them he’s an artist in residence, but the officers say they don’t know him, and that the door was open and an alarm went off. He asks, “It is?”

Still in the dark, he asks to have cuffs taken off of him.

When they do, Sims asks to take a picture and an officer in glasses tells him, “Not if you’re going to post it somewhere.”

Sims asks again, and the same officer says, “No because you’ll probably post it somewhere.”

Sims explains to officers that his art is controversial, and that's why he was trepidatious about potential intruders. Officers talk on the way out about how they didn’t know there were residences in the building.

“Officers identified themselves as CPD officers and made other commands for the person to come out. There was no reply,” Timmons said. “Officers found a man on the second floor. For safety reasons and while confirming his reason for being inside the building officers placed the man in investigative detention.”

The officers' guns were drawn following Columbia police protocol and techniques taught at the S.C. Justice Academy, according to department news release sent later May 20.

Sims’ ongoing display at the center caps 20 years spent fighting the symbolism of Confederate flags by recoloring and recontextualizing them. The Florida-based artist has often taken the fight directly to the flag’s supporters, protesting at their events.

He has been in residence since May 4, and will be staying at the 701 center until May 25, returning for a final week in town on June 10.

Sims said he feared Neo-Nazis or the Ku Klux Klan had come to do him and his exhibition harm when he first heard someone coming toward his apartment. He hid and prepared to call 911. Sims takes issue with police detaining him while officers made sure he was supposed to be in the loft.

During a previously planned public talk in the 701 gallery the day after the incident, Sims recounted that he asked the officers for identification.

“They looked at me like I'm stupid,” he said to the crowd.

He said, however, that the on-scene supervisor should have allowed Sims to take pictures of officers. Columbia City Manager Teresa Wilson suggested the city needed to better identify areas with residential vacation rentals, like Airbnb, and share that information with the police and fire departments.

Columbia Mayor Steve Benjamin said he has talked to Holbrook about the incident, and plans to visit with Sims on Tuesday to discuss what transpired.

"Looking forward to learning more, I haven't watched the body cam yet and I haven't had a chance to speak to the artist yet, so we'll spend some time, and after that I'll be happy to share my thoughts with you," he said.

Michaela Pilar Brown, executive director of the 701 Center and an internationally renowned artist in her own right, was alarmed by the incident.

She hopes the incident will lead to productive conversation and artistic response.

“It's a good opportunity to talk about the issues that he's bringing forth,” she said of Sims and his work.

For his part, Sims will look to respond to the experience in a couple ways. He plans to write an open letter to the Columbia Police Department about the incident, and to create his own “artist’s incident report,” putting forth his view of what happened in the style of a police report.

“I think this is a very important, teachable moment,” he said. “For the department to evaluate their policies and procedures about entering spaces, and how to engage folks, issues around assumption of guilt, perpetration from the onset, and how that can create a certain level of anxiety and miscommunication and misrepresentation.”

Andy Shain contributed to this report.