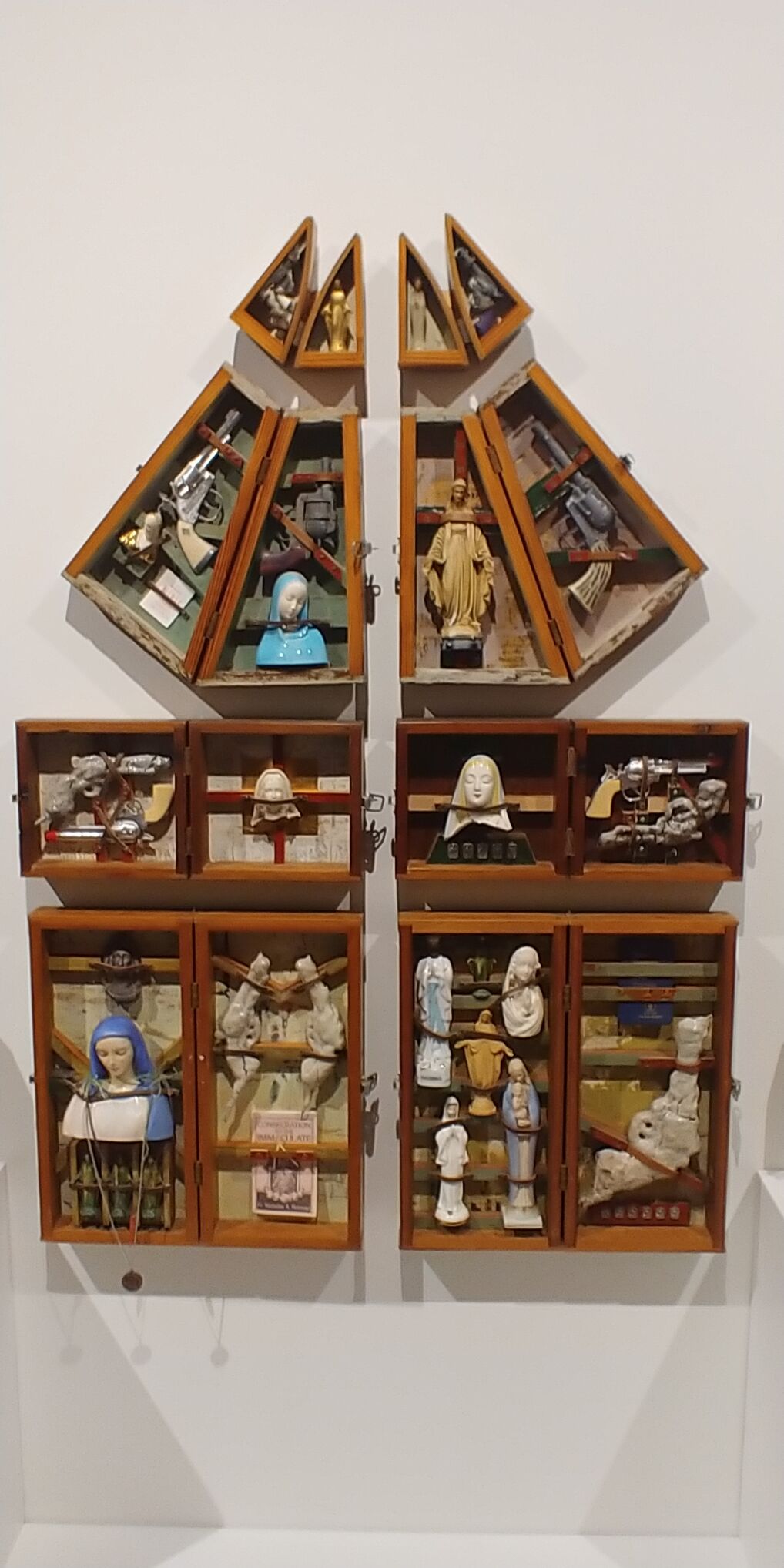 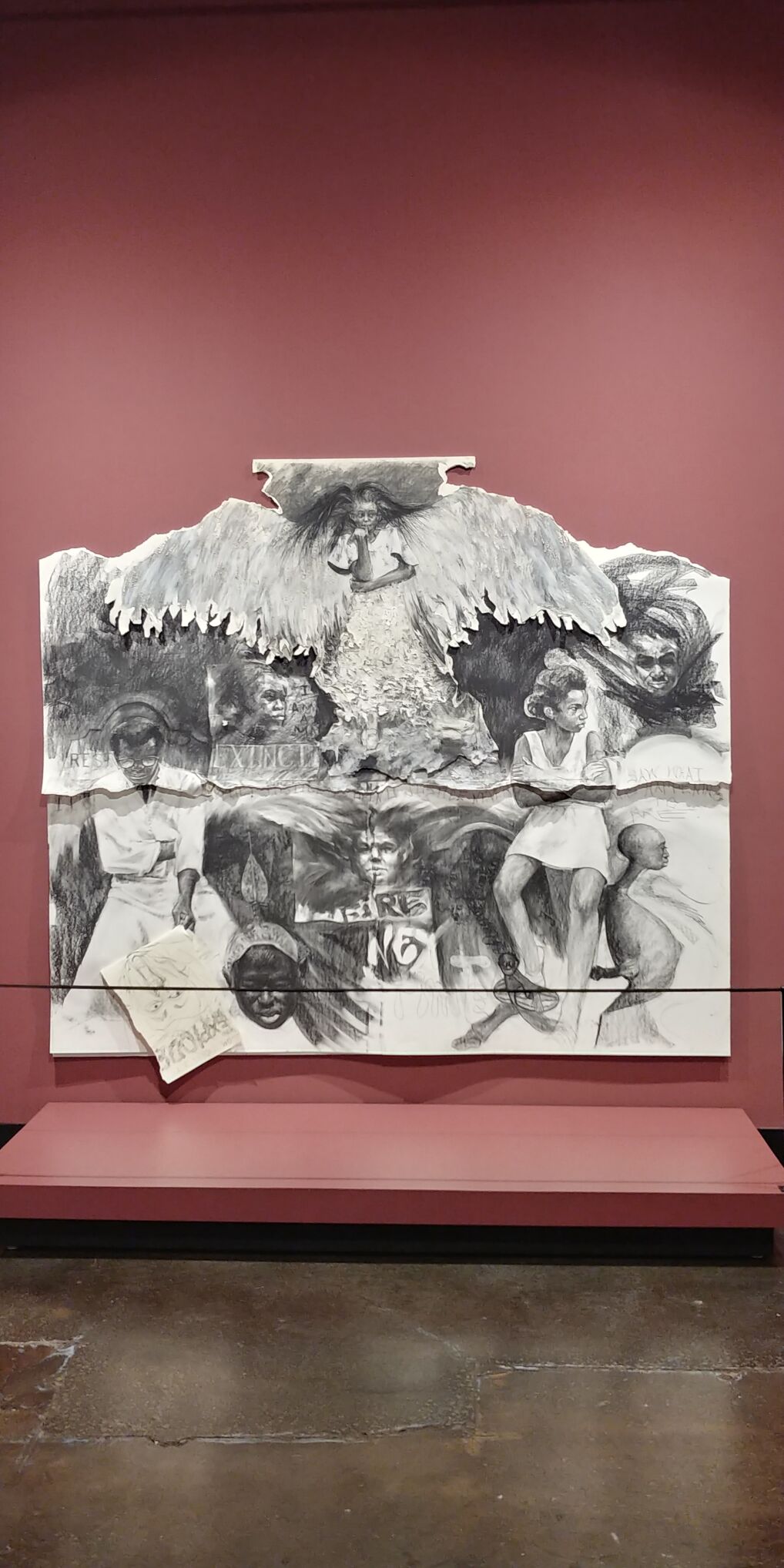 When most of us hear the word “portrait,” we probably envision a painted composition featuring the likeness of a particular individual. The “Face to Face” exhibition in the Lipscomb Gallery at the South Carolina State Museum showcases many such artistic offerings — offerings that not only meet our expectations, but also expand our understanding of the genre.

Consider, for example, an anonymous work entitled “The Daughters of William Gregg” painted in Aiken around 1850. In this double portrait, Rosa supports her sister Mary as the latter reaches for a floral bouquet.

Indeed, both girls, the daughters of the founder of the Graniteville Mill, the first successful textile manufacturing center in our state, would appear to inhabit a land where flowers perpetually bloom as indicated by the garden landscape glimpsed through a column-framed window and the cut posies that surround the two figures.

What adds poignancy to this depiction of familial intimacy is the fact that what appears to be the older sister is actually the younger. Mary died at the age of three, so Rosa is actually communing with her dead sibling, whose missing shoe symbolizes the fact that she has departed this physical plane.

Thus, a work that might appear to be a simple depiction of two young girls actually has a narrative content. Portraits can tell stories, and they can do so much more.

The goal of the exhibit is to expand our definition of portraiture by assembling from the museum’s own collection works that reflect an unexpected range of content and approach.

In the current exhibition are Nigerian-American Adebunmi Gbadebo’s “Blues People,” mixed media “portraits” composed of pulverized human hair, cotton, and rice paper. Lacking any physical likenesses of her enslaved ancestors who toiled on two Lowcountry plantations subsumed under the name “True Blue,” the artist resorts to associative materials, including agricultural products like cotton, rice, and indigo once grown in these ancestral spaces, to create tangible links to heretofore unrecorded lives.

Arranged on the wall in a steeple-capped configuration, Lenzo’s 10 hinged boxes display two objects of devotion — ceramic figurines and painted images of the Virgin Mary paired with toy guns.

Such a coupling makes visual reference to America’s schizophrenic public identity — our collective claim to be the world’s peacemakers while at the same time burdened with an entrenched gun culture.

Another impressive piece that offers a cultural portrait of sorts is the “Catawba Indian Head Jar” by the late Lexington resident Sara Ayers.

Presumably the largest piece of Catawba pottery made in our time, this earthenware vessel features two effigy heads as handles and a host of largely circular surface markings made with a stick before pit firing.

This impressive example of Catawba ceramic artistry, part of perhaps the oldest continuous pottery tradition east of the Mississippi, is both representative of a still vibrant Native American culture and the creativity of one particular individual in a long line of artistic forerunners.

One of the most impressive single works in the current show is just inside the entrance to the Lipscomb Gallery.

Tyrone Geter’s monumental “Justice is Blind” features masterful charcoal renderings on sections of shredded and torn paper. The overall image incorporates an assortment of African American figures over which hovers an angel clearly perplexed by the predicament expressed in the hand-printed text: “justice never saw what was happening to me.”

The various figures are never explicitly identified in this imposing work, but their dilemma is clearly and persuasively communicated by their closed stances and solemn faces. It’s a stunning visual denouncement of persistent inequalities in the American justice system.

Let me add one final example.

Noted watercolorist and guiding force behind the creation of the South Carolina State Museum, Guy Lipscomb is represented in the current exhibition by a whimsical self-portrait from 1990, which makes reference to the peripatetic life he was leading during that period.

Framed by two trousered legs is a valise emblazoned with a Salvador Dalí-like humanoid, a melting configuration of head and arms with no feet and thus no ability to root itself to any particular spot. It’s the embodiment of a life led on the road and out of a suitcase.

In this latest large-scale exhibition at the state museum, visitors thus come “face to face” with a wide range of portraiture, both literal and associative. In these times, when we are challenged by an ongoing health crisis as well as continuing social and political divisions, this exhibition forces us to confront our need for human connections.

We are asked to face the faces of others.