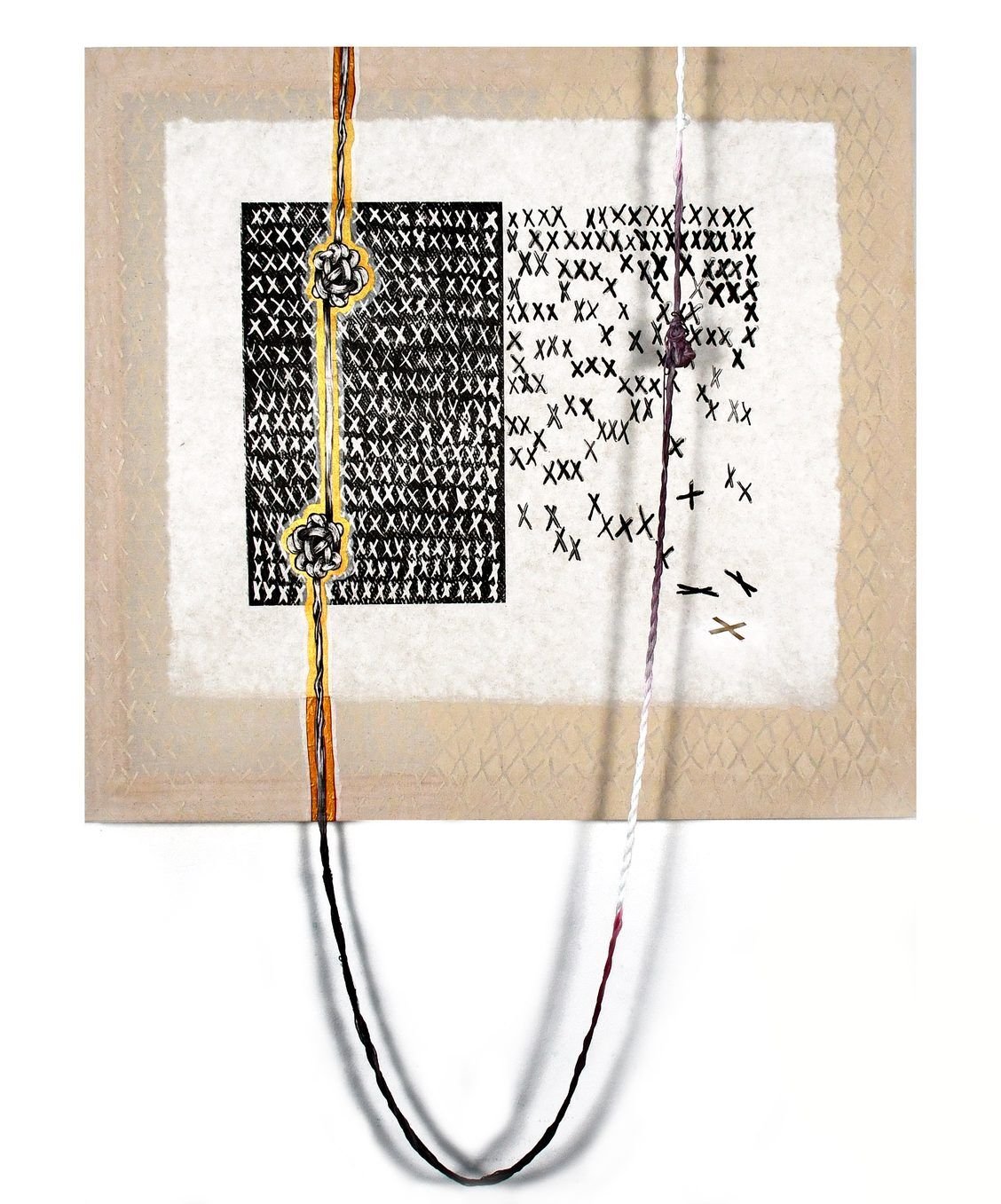 Work from Adrian Rhodes' "How to Untie a Tight Knot" exhibition at the 701 Center for Contemporary Art. Provided/701 CCA 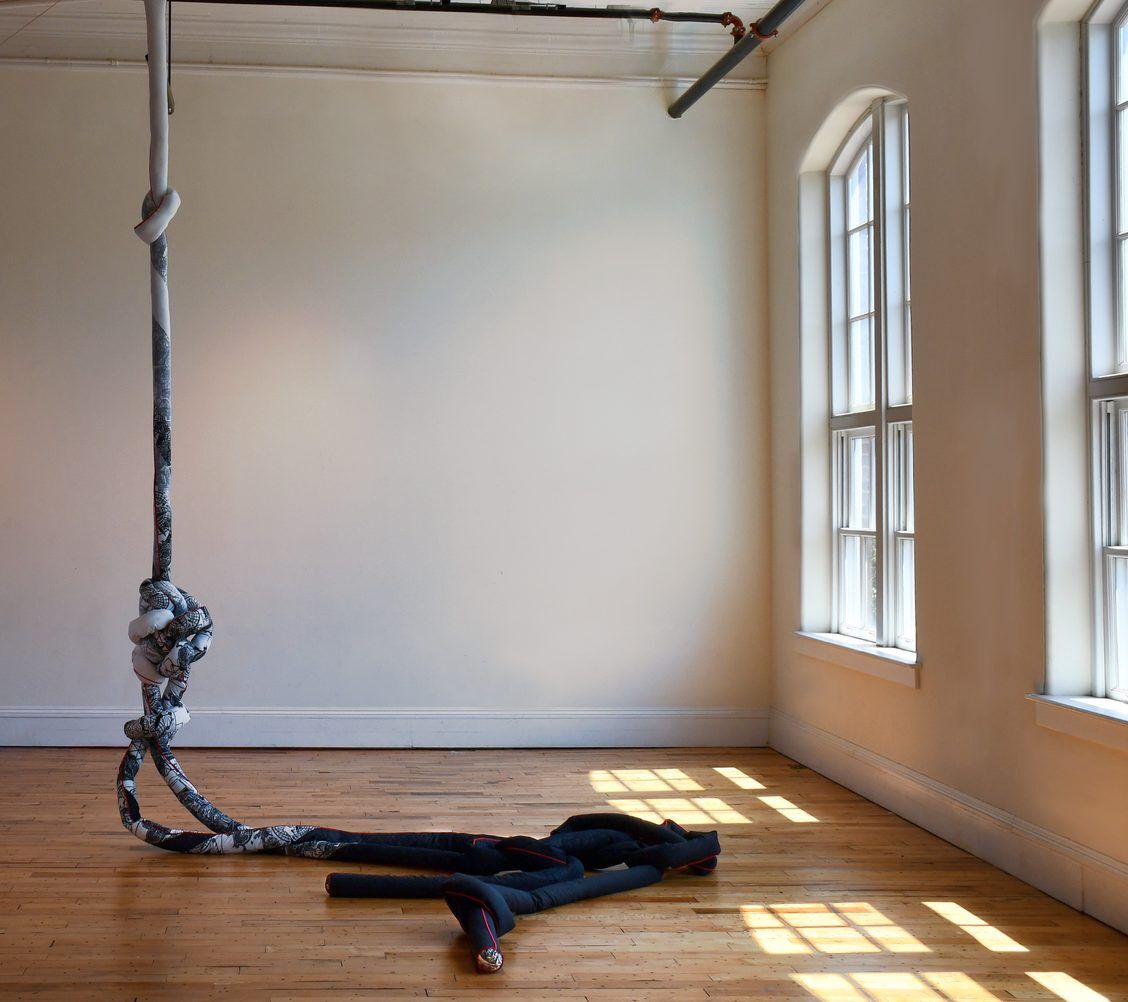 Work from Adrian Rhodes' "How to Untie a Tight Knot" exhibition at the 701 Center for Contemporary Art. As the title suggests, the knot is a recurrent theme in the work. Provided/701 CCA 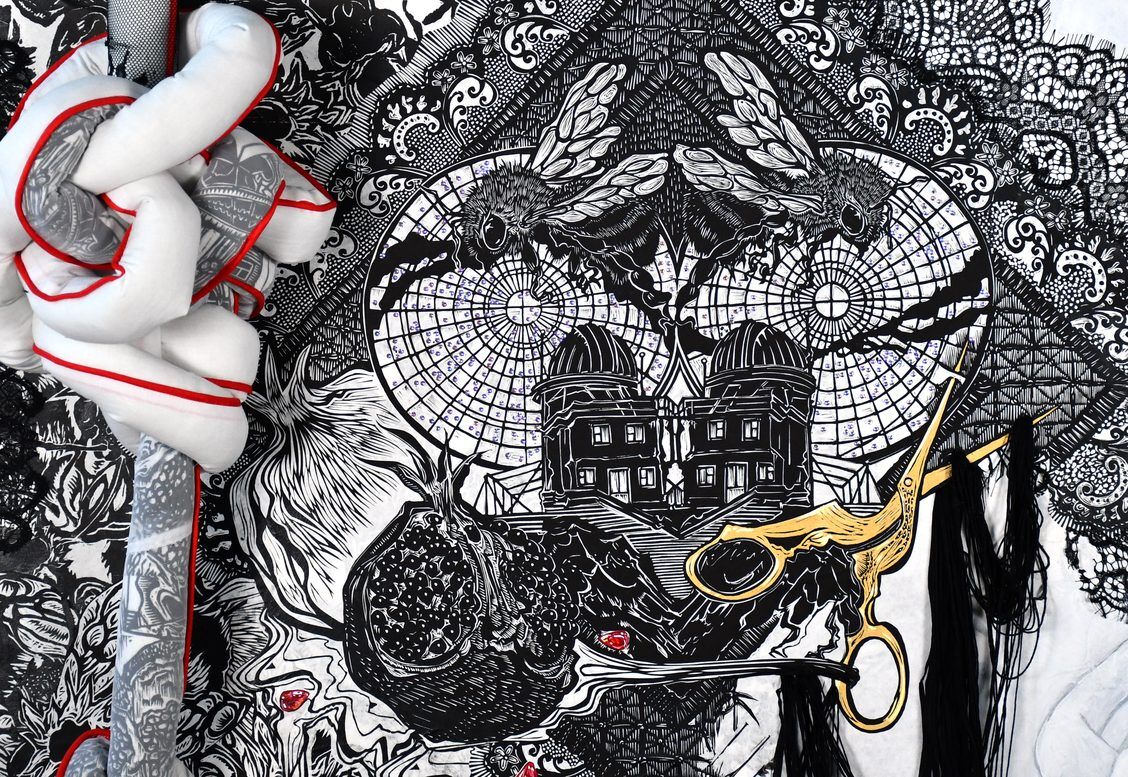 Artist Adrian Rhodes' background is primarily in printmaking, though she now is multidisciplinary. Rhodes' "How to Untie a Tight Knot" exhibition is ongoing at the 701 Center for Contemporary Art. Provided/701 CCA

Work from Adrian Rhodes' "How to Untie a Tight Knot" exhibition at the 701 Center for Contemporary Art. Provided/701 CCA

Work from Adrian Rhodes' "How to Untie a Tight Knot" exhibition at the 701 Center for Contemporary Art. As the title suggests, the knot is a recurrent theme in the work. Provided/701 CCA

Artist Adrian Rhodes' background is primarily in printmaking, though she now is multidisciplinary. Rhodes' "How to Untie a Tight Knot" exhibition is ongoing at the 701 Center for Contemporary Art. Provided/701 CCA

Absence is often thought of as a missing of something. South Carolina artist Adrian Rhodes explores the idea of this being a much more tangible idea than what might be seen inherent in its meaning.

In an interview with Free Times, Rhodes illustrated this concept as such: When she goes with her family to a restaurant, a host seats them and a spot is empty, it is simply empty with not much more thought put towards it. The table has everyone that was meant to be there at that moment.

However, if they're at their holiday meal, say Thanksgiving, and the seats typically filled by her children’s grandparents are now empty, that absence is wrought with a tangibility.

“Absence in itself is only ... an act of happening,” Rhodes said. “There is a palpable absence of the people who should be in the room that aren’t. It’s not a passive thing. Once you have that in your life in some fashion, it becomes very prominent and active.”

That idea and ideas that fit that broader theme of loss are broached in Rhodes’ ongoing exhibition “How to Untie a Tight Knot” at the 701 Center for Contemporary Art. No stranger to the arts organization, Rhodes has also shown works there in the 2019 and 2021 701 CCA South Carolina Biennials.

Her latest exhibition, which is made up of 68 pieces, comes as part of the artist winning the organization’s 701 CCA Prize 2020, a paid residency inside the gallery that culminates in an accompanying exhibition — in this case “How to Untie a Tight Knot.” The exhibit runs until Sept. 1, with a closing reception planned.

The work itself is a collection of printwork pieces that focus on repeating imagery and feature interspersed 2D and 3D elements. For instance, the 38-year-old artist strings a rope from the ceiling and ends it at the print, where it continues on as an illustration on the print, or lays over it, in some cases.

In many cases, recurrent imagery from Rhodes' past work resurfaces, namely in the form of images of bees. The insect repetition is spurred on by an interest in matrilineal societies — in which maternal lines, not paternal, take precedence in ancestry — and the way beehives operate. The queen is the leader, workers are the queen’s daughters and, when a queen dies, a generational replacement takes her place.

The bees go further as well, however, with Rhodes finding interest in the Celtic idea of bees being treated as a member of the family. As such, a family’s bees needed to be informed of major life events like a birth or death. In the latter, families would cover them so they could mourn alongside the family.

“There’s this strong correlation between mortality and grief and the bees," Rhodes explained. "I found that to be really fascinating. A lot of my work deals with loss.”

And so it does, as the artist explained that all of her work is autobiographical.

When she was 24 and had been married for just six months, Rhodes' mother died without ever being able to meet Rhodes' two daughters. She described herself as being “between my fully adult self.” Then, in 2018, Rhodes’ father died as well. Both deaths were unexpected, she said.

Outside of her family, her professional relationships have faced death as well. Her undergraduate college mentor died and she noted the death of Columbia gallerist Wim Roefs in May.

In her works, Rhodes finds the grief manifesting itself in anxious ways. That was only intensified during the COVID-19 pandemic. She was drawn to found poetry (where one blacks out words of a text and leaves others visible for emphasis) and incorporated that into her exhibition.

Perhaps one of the most prominent aspects of the work to be influenced by the pandemic are the knots, which are incorporated in the ropes throughout the exhibition.

“They were directly coming out of anxiety and stress and tensions that we were all feeling,” she said. “I realized that all of those pandemic feelings were adjacent to all of the other losses and traumas and griefs that I had already been processing and dealing with. So that just folded in and kept going and turned into this exhibition.”

Rhodes’ background as a printmaker results in much of the repetition in her work, such as the aforementioned bees, and results in the repeated imagery of stork scissors.

Similar to the bees, she is interested in the history of those scissors, which were used by midwives in labor for cutting, sutures and other tasks during birthing. However, Rhodes noted, while the midwives waited for labor to progress, they worked on embroidery to pass the time.

In this, Rhodes’ works finds a hopeful, forward thread in the themes of her work and in making her art.

“I like the idea of mending, suturing," she said. "Cutting is destructive, but it’s also constructive. If you think about cutting away the unnecessary parts, you only get to the most vital and important.

"There’s also this idea of cutting yourself loose. If you’re tangled up in all of these anxieties and metaphorical thoughts … you cut yourself free.”