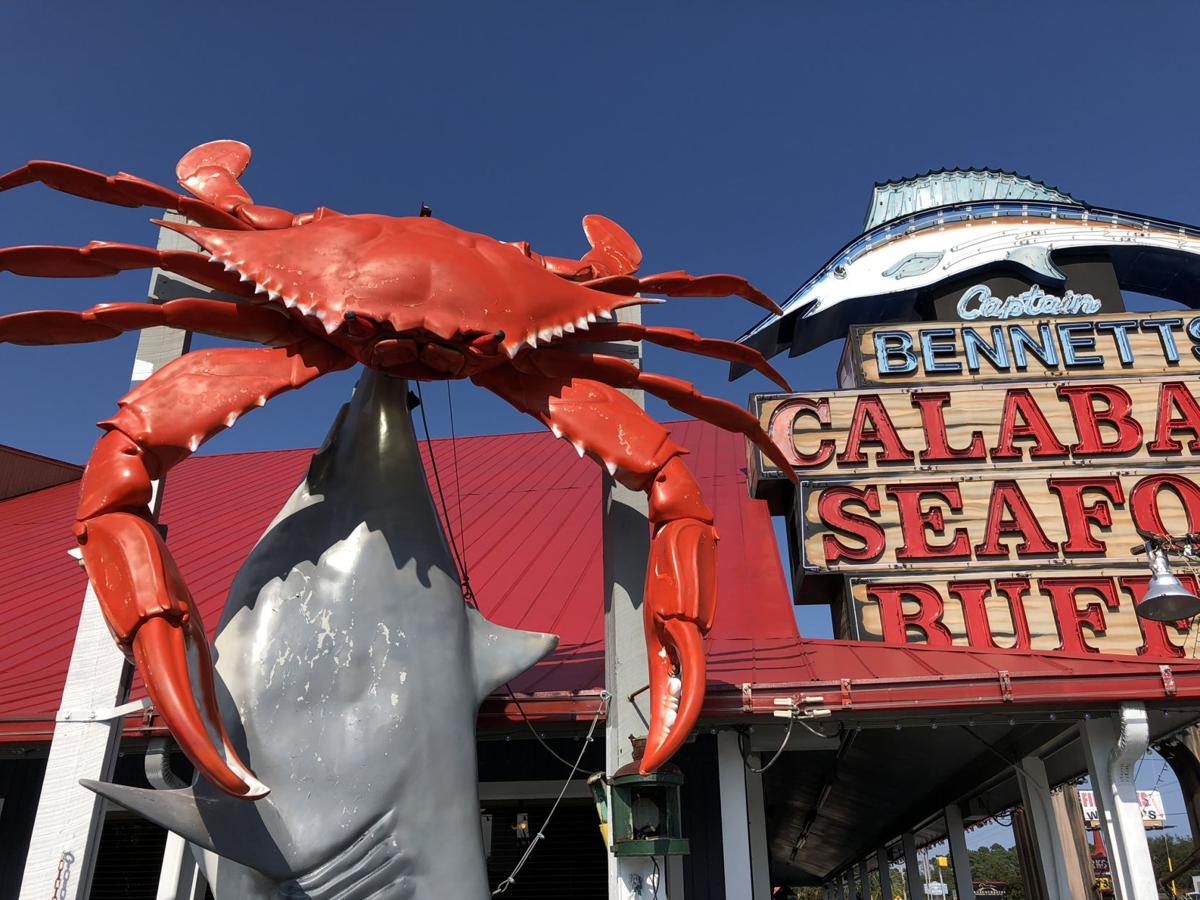 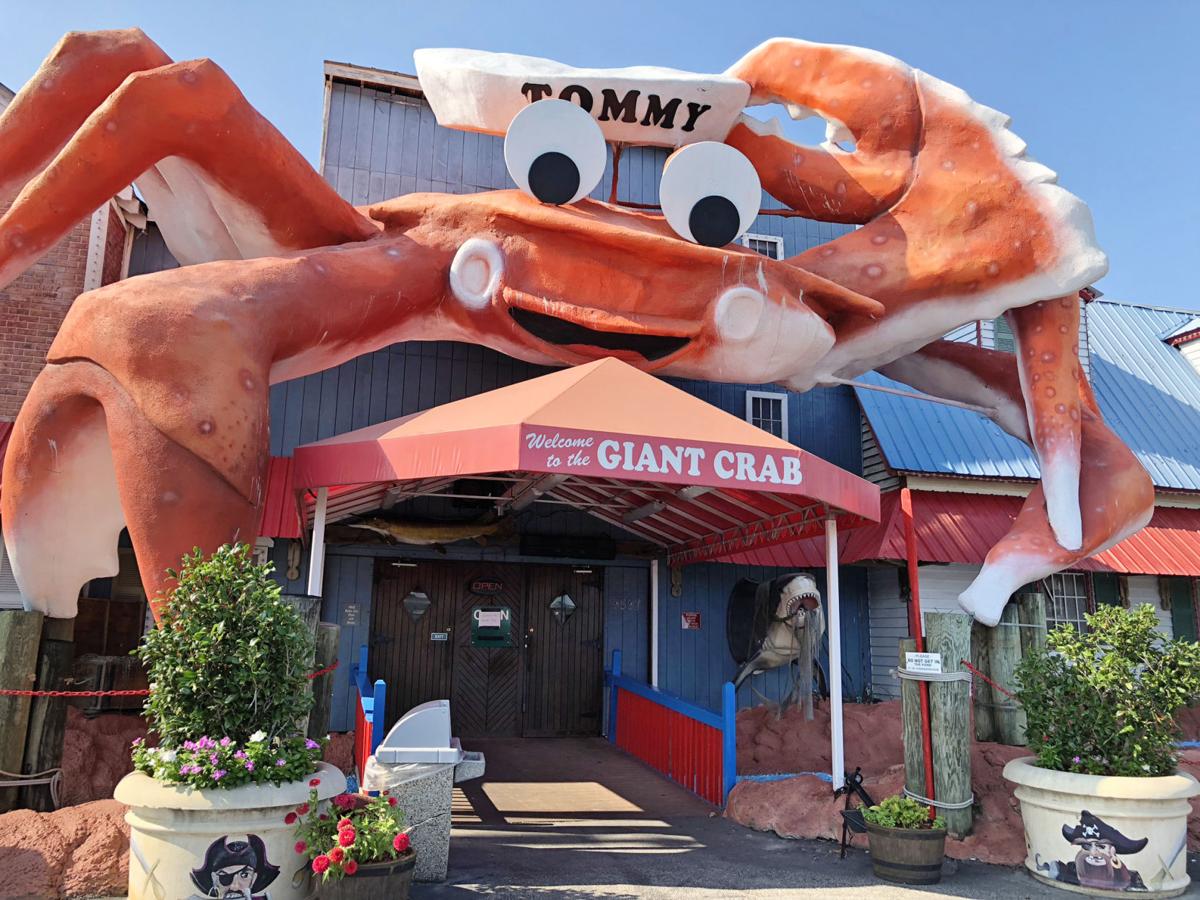 Giant Crab Seafood Restaurant was one of the crab houses that was briefly closed by Hurricane Florence. Hanna Raskin/Staff 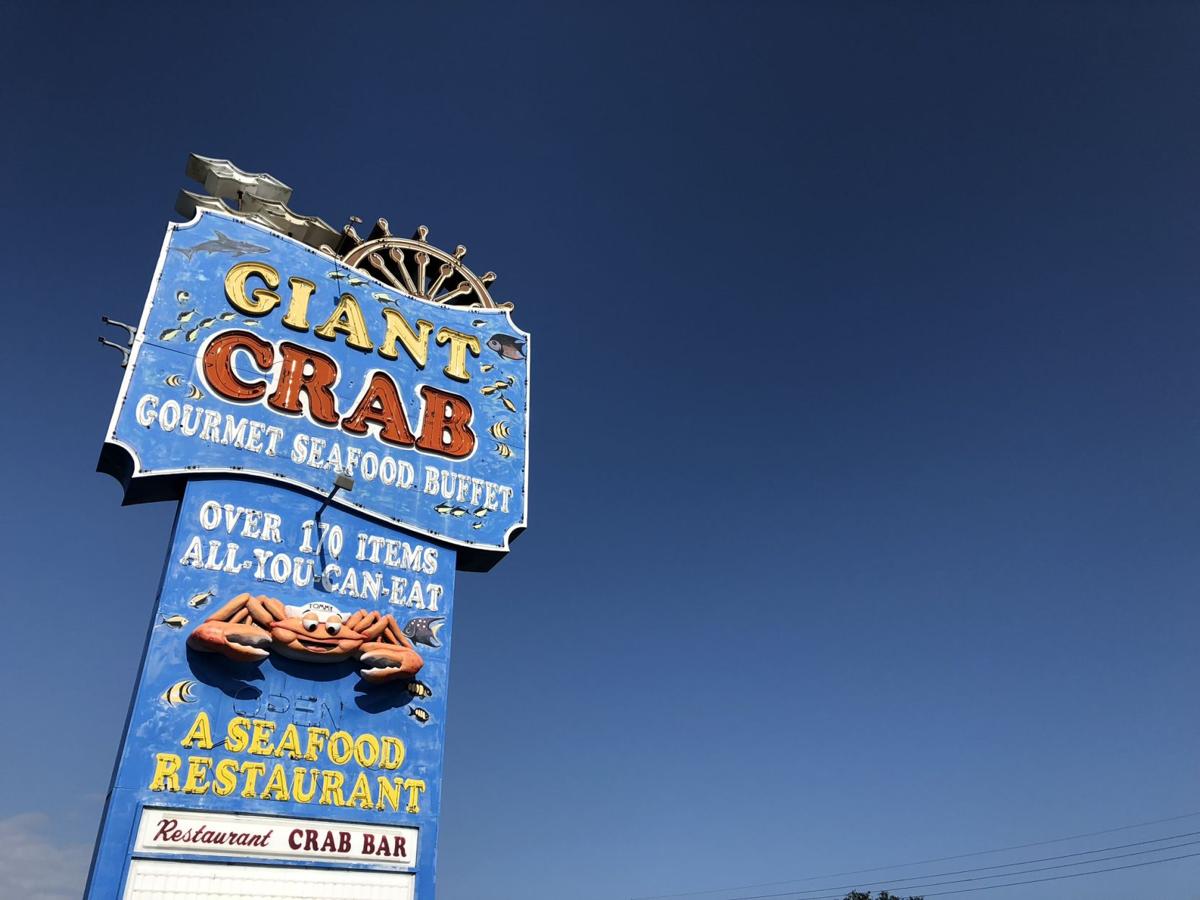 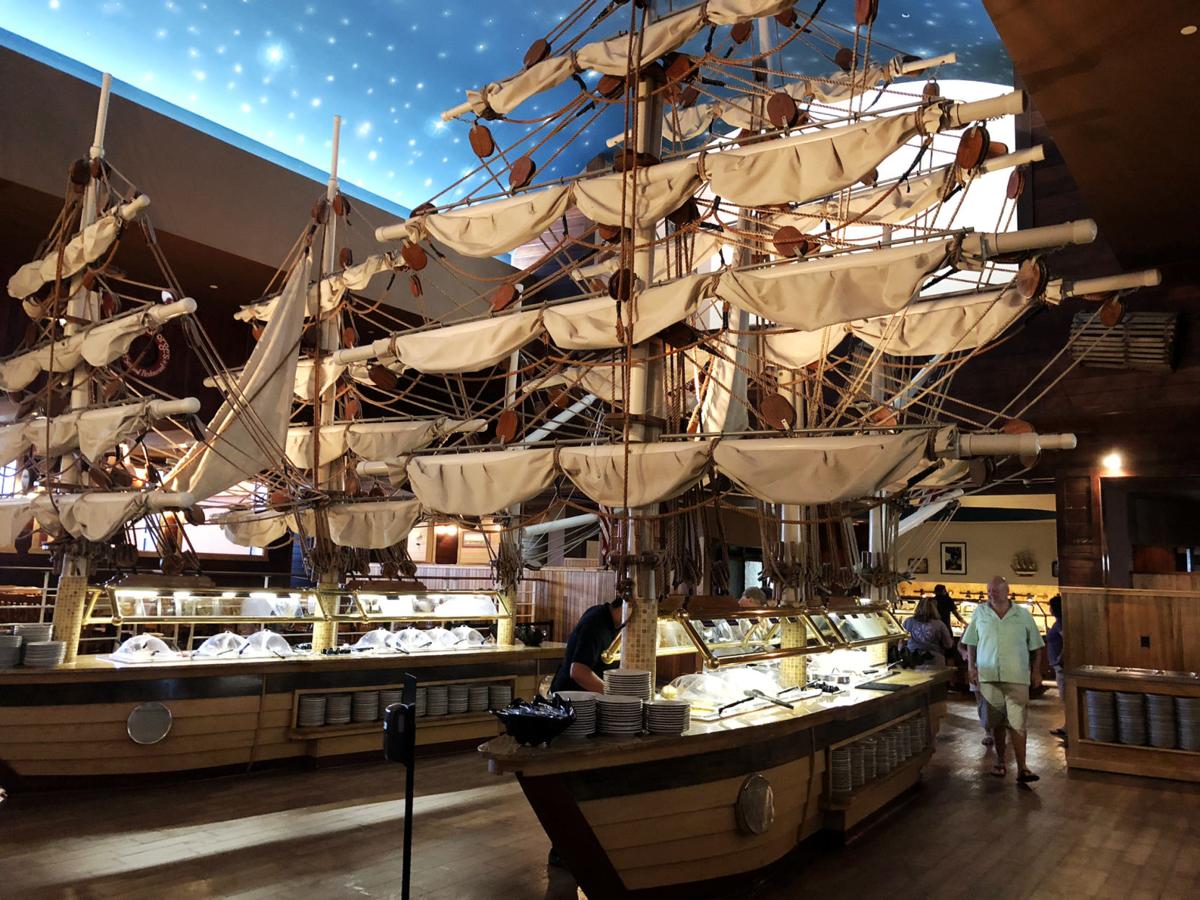 The self-service tables at Captain George's are supposed to look like wooden ships. Hanna Raskin/Staff 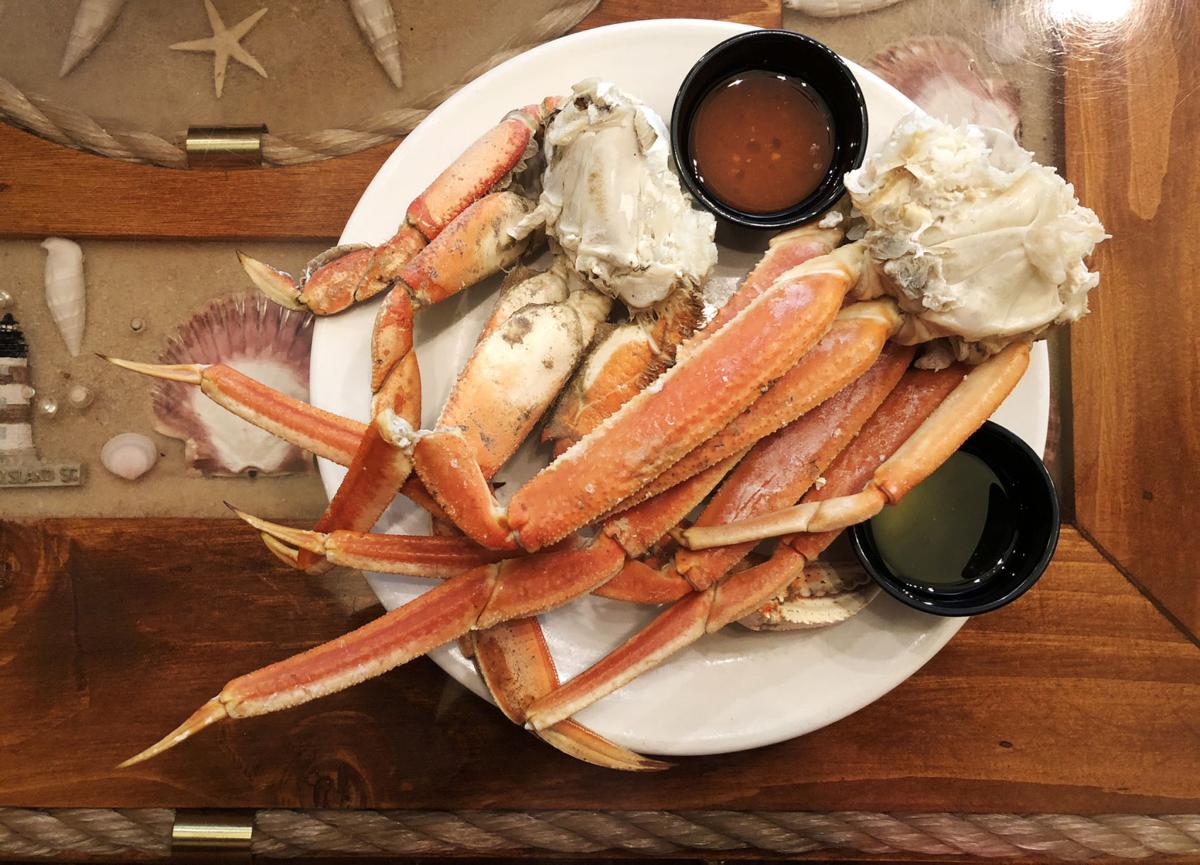 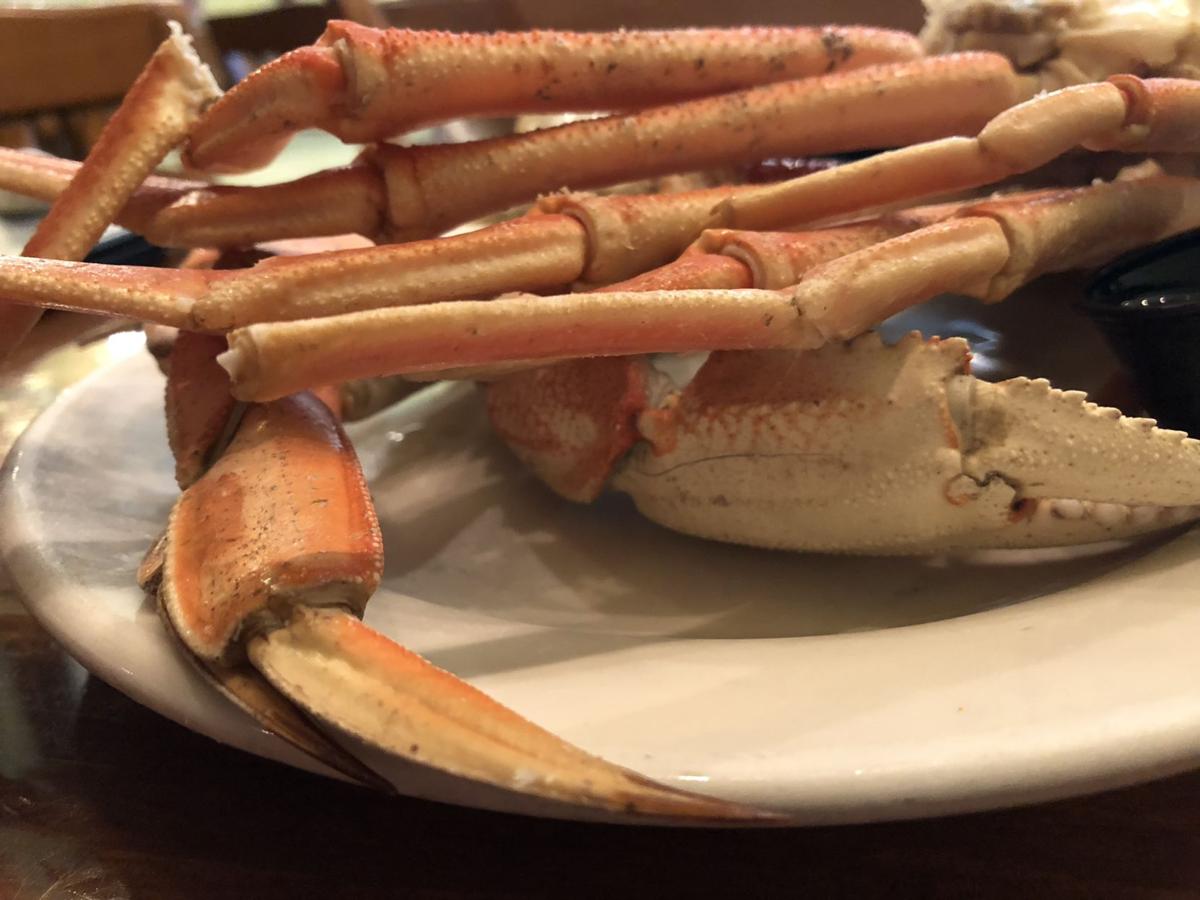 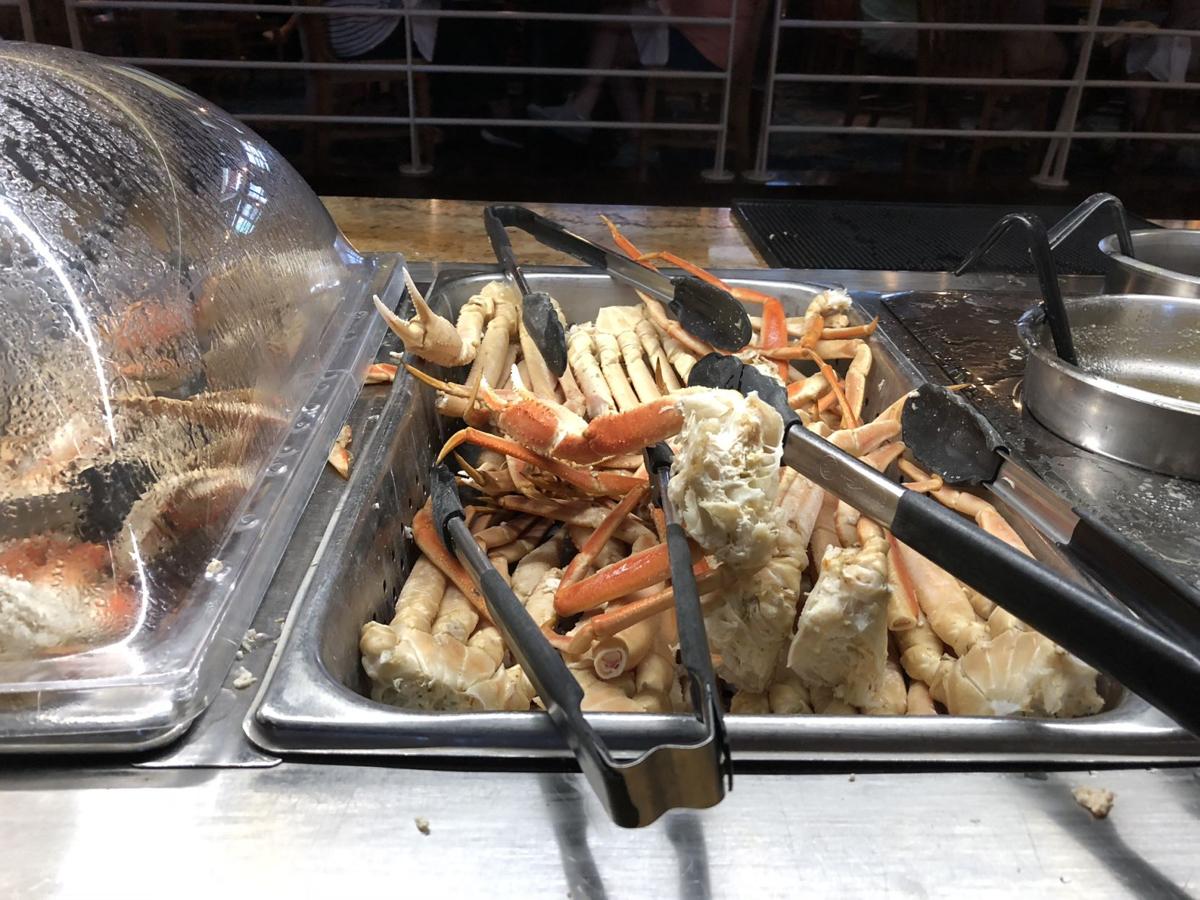 Giant Crab Seafood Restaurant was one of the crab houses that was briefly closed by Hurricane Florence. Hanna Raskin/Staff

The self-service tables at Captain George's are supposed to look like wooden ships. Hanna Raskin/Staff

Asked what Captain George’s serves besides crab legs, manager John Long sighs and reaches for a full-color brochure, its front flap die-cut along the serrations of an Alaskan snow crab claw.

On any given night, the brochure promises, customers at the Myrtle Beach buffet can eat their fill of thickly cut prime rib, she-crab soup, oyster Rockefeller stubbled with bacon, clams mounded with buttery stuffing, free-form deviled crab and a funeral reception’s worth of desserts, including a tray of rich rice pudding with the restaurant’s name stenciled atop it in sifted cinnamon.

Yet every night, hundreds of people patiently wait behind the velvet ropes in Captain George’s chandeliered lobby knowing full well they’ll bypass all of it. They come solely for the crab legs, piled high in a steam pan on a buffet table styled to look like a square-rigged ship. The perpetually-replenished clusters are positioned beneath the sail that mariners would call the main course.

Captain George’s has 1,030 seats, all of which can be sat twice at the height of summer tourist season.

Most patrons don’t count how many legs they eat, tracking their consumption sessions in time instead: A server remembers when a few normal-seeming guys occupied one of her tables for hours, peeling legs so swiftly that she had to empty their shell bucket every five minutes. It all adds up to about 1 ton of crab legs each night, helping to make the four-location Captain George’s chain the largest independent buyer of Alaskan snow crab legs in the world.

Based in Virginia, Captain George’s is widely considered the shiny diamond of the Grand Strand’s crab leg scene. But it’s just one of 12 area seafood buffets which, despite titular nods to calabash, are serving exponentially more steamed Alaskan crab legs than local seafood fried in North Carolina-style batter.

And while crab leg adoration is most visible in Myrtle Beach, the whole of South Carolina has been seized by it. Blue crabs may have tradition and proximity on their side, but Alaskan crab legs are easier to pick and taste just as delicious to their devotees. Much to the consternation of a reporter seeking a money quote, their uncomplicated popularity comes down to some variation of “crab legs are great!”

As Southern eating habits go, though, crab leg indulgence is a relatively new development, with only half a century of history behind it. And like most rituals associated with a food that comes from heart-stoppingly cold waters, climate change means its future is hazy.

Then, during the war, at the same time that troops deployed to the Western Front were discovering pizza, crews sent into the contested northern Pacific encountered king crab on their mess tables. Among them was Seattle’s William Blackford, who commanded one of the Navy’s first integrated ships.

Blackford had the sweet taste of those crabs in mind when he later ran into a fraternity brother backing a new seafood company.

Lowell Wakefield, scion of a family that had made its money on salmon and herring, in 1945 had incorporated Deep Sea Trawlers to bring king crab to the American market. His idea was to build up a boat to catch, butcher, process, cook and freeze the ocean giant, described by contemporary newspapers as having “drumsticks bigger than hams.”

“They were all looking for something to do, and some adventure along the way, and they got it,” Blackford’s son, Mansel Blackford, said.

At first, none of the company’s projections panned out. Their crab catch was smaller and equipment expenses higher than anticipated. Toward the end of 1948, Deep Sea Trawlers had $432,000 in liabilities, which worked out to more than three times the value of its assets in unsold crab meat, and $14 in the bank.

But the company then had a run of good luck. It successfully tweaked its harvesting technique, picked up a well-funded government contract to map Alaskan waters and adopted a radar system for locating crabs. By the early 1950s, the newly renamed Wakefield Seafood was processing more than a million pounds of crab a year.

Having found the crabs, Wakefield now just needed to find people to buy them.

Heating up the market

The Seattleites in charge immediately narrowed their sales focus to the east coast, since they were sure eaters accustomed to Dungeness crabs weren’t inclined to abandon them. And they figured they’d have an easier time with restaurants than individual retailers.

Their first strategy involved suggesting that restaurant owners save money by passing off their product as lobster. The problem was restaurant guests were so taken with the king crab in their Newburgs that they wanted to know where they could get lobster like that. So it fell to Blackford to tell the nation about Wakefield’s catch.

“During the off-season, he fitted out the trunk of the family Mercury with a big freezer compartment,” recalled Mansel Blackford, who by that point was desperate for other families to take an interest in king crab since it was the centerpiece of nearly all of his boyhood suppers. (The other meals featured cuts from a 200-pound halibut that was his father’s take in a fishermen’s trade).

Blackford spent more than three months on the road, staging crab feeds for chefs from New York City to Miami, freshening his dry ice stock and picking up crab legs at the train station every four or five days. Before each event, he’d call the local newspaper, promising a colorful story.

When Blackford walked into each banquet room, he’d loudly demand that his hosts crank up the air conditioning.

“He’d say, ‘I’m a sea captain from the frozen north, and I can’t stand the heat’,” Blackford said. “It was (not true), but it worked. It got them publicity. Then they could start advertising for consumers.”

From 1955 onward, ads extolling Wakefield king crab regularly appeared in Life and Ladies Home Journal. In the Charleston area, the A&P was the first store to offer crab legs, selling them in 1957 for 95 cents a pound, or more than twice the cost of milk-fed veal roast.

Within a few years, the supply of crabs went up and prices came down: King crab was such a competitive market by 1961 that 16 men died trying to catch them in brutal weather.

“Today, you can walk into the neighborhood supermarket and pick up king crab from Alaska,” Charleston Evening Post food editor Charlotte Walker reminded readers in a 1965 column featuring recipes for king crab kedgeree and king crab Lancelot, which is essentially fettucine alfredo with king crab on top. “It’s a royal treat and Queen Guinevere and King Arthur would have swapped a kingdom for it without so much as a hey-nonny-nonny.”

In the early 1970s, around the time that George Pitsilides of Captain George’s was opening his first seafood restaurant, king crab legs started to appear on South Carolina seafood buffets. Except it wasn’t always king crab: Cheaper snow crabs often took the place of their fellow Alaskan crustaceans.

It’s easy to tell the difference, said marine biologist Bradley G. Stevens. Stevens is a professor at the University of Maryland who earned his master’s degree from the College of Charleston.

“A king crab leg is covered with spines,” he said. “If you tried to grip it tightly with your fist, you would puncture yourself and bleed all over the plate.”

Perhaps that’s why many eaters didn’t mind the substitution. Kenyatta McNeil of Nana’s Seafood and Soul said his customers ask specifically for snow crab legs; he clears two cases of legs a week, frying clusters in garlic butter and selling them for $20 apiece.

“People in earlier days stayed away from legs because they’re more expensive,” he said. “Charleston is a blue crab city. But a lot of people don’t like blue crab because of all of the picking. Snow crabs are a two-pick system.”

What king crabs and snow crabs have in common are their lifestyles. Both kinds of crab like to eat worms, sand dollars and their own.

“Both species will eat their young, if given the opportunity,” Stevens said.

If their parents don’t devour them, crab larvae settle on the ocean floor after about two months of swimming around with their 200,000 siblings. It takes them five years to mature; the average leg served at a seafood buffet belonged to an 8-year-old crab.

Both species are also at the mercy of global warming.

“We looked very closely at how these fisheries are managed, and both are managed very well,” Stevens said. “In Alaska, they have some of the most enlightened management in the world. Having said that, however, I’m going to tell you that climate change has a big role in affecting these crab populations. I have some fears for the future.”

King crabs are more susceptible to increasing seawater temperatures, according to Stevens. Still, don’t try telling a snow crab that he has to stay put because his population isn’t at as serious risk for weather-related decline: Snow crabs are now on the move, resettling beyond what Stevens describes as their “optimal habitat,” in search of colder water. King and snow crab alike are headed north, popping up in areas around Russia and Norway that they didn’t previously inhabit.

It’s too early to know whether snow crab will continue to thrive. Nobody can be sure whether the growth of a Russian snow crab fishery will fundamentally change the market.

For now, though, there is no end to the crab legs at the Myrtle Beach buffets. Until their stomachs tell them to stop, for $36.99, patrons at Captain George’s are likely to keep gorging on coral-tinted joints sloshed with melted margarine, thoroughly disinterested in all of the other luxuries surrounding them.