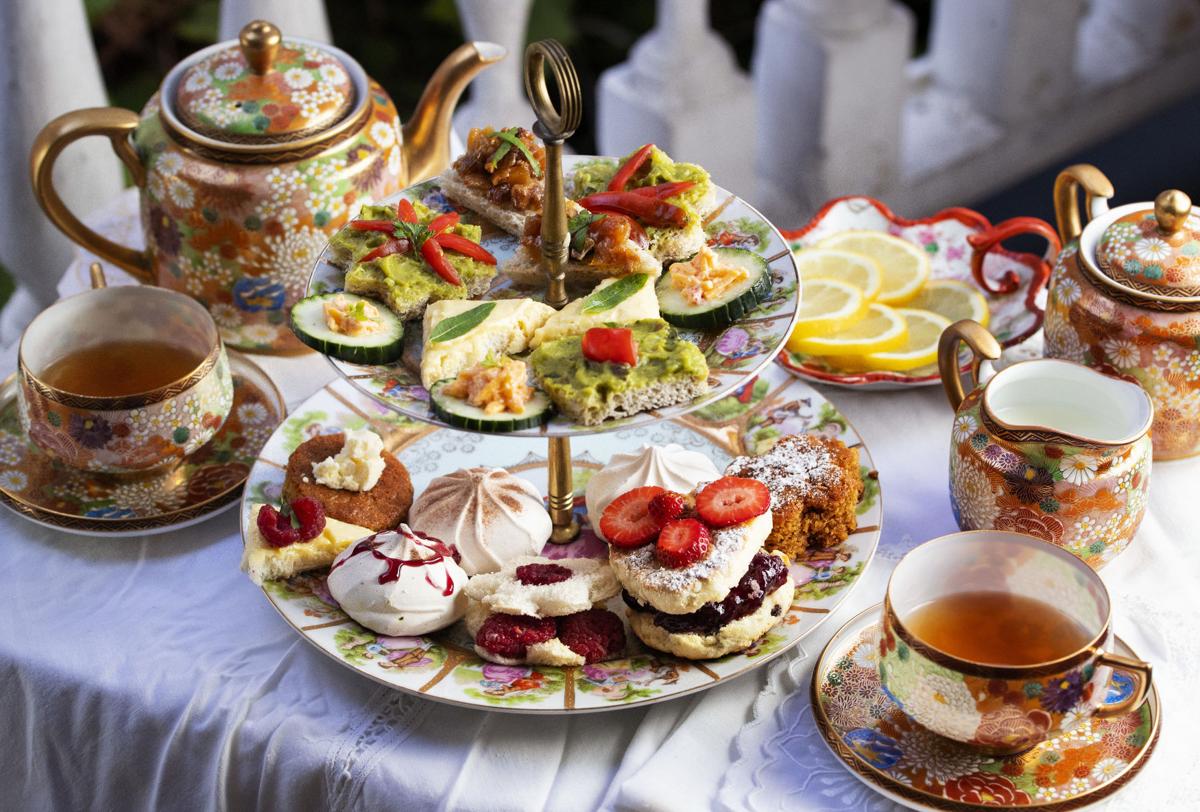 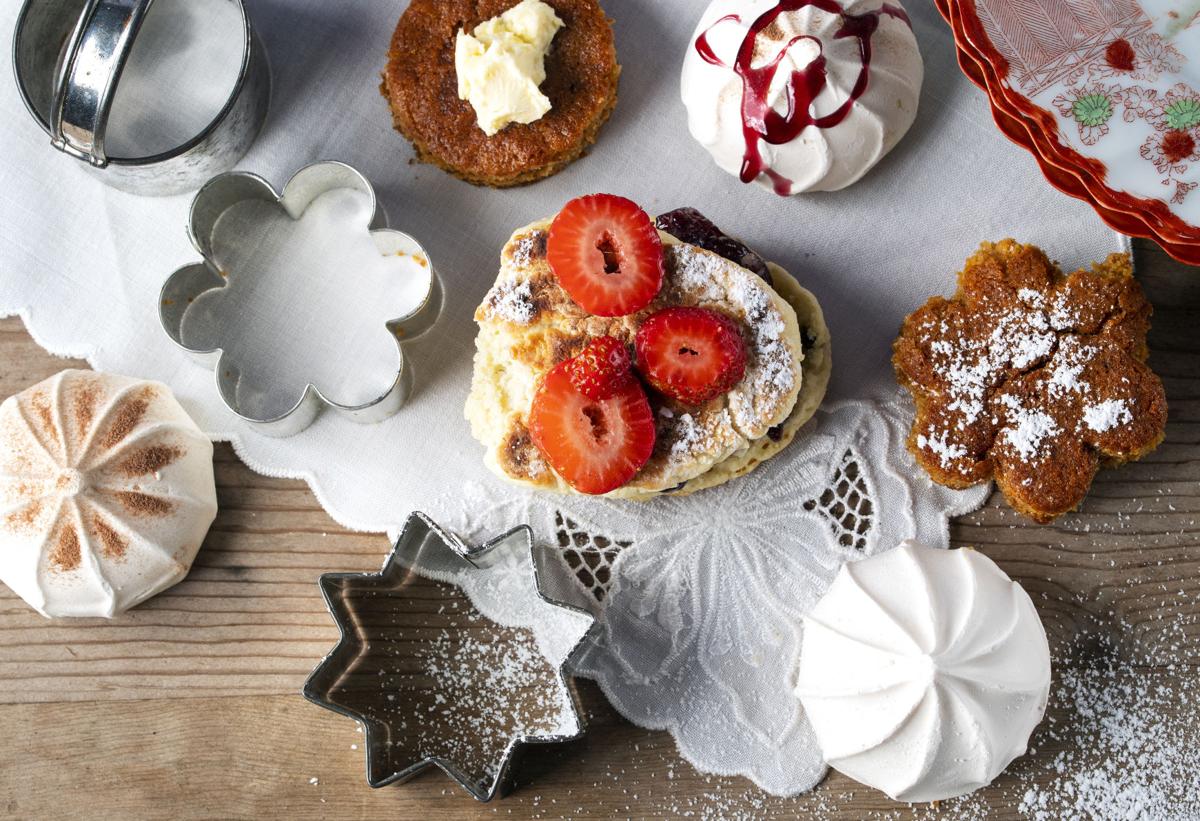 Assorted desserts, including gingerbread and strawberry scones from Millers All Day with clotted cream, and meringues with raspberry purée and grated cocoa, at Nathalie Dupree's on Thursday, October 31, 2019. Food styling by Lauren Furey and Donna Gill. Lauren Petracca/Staff 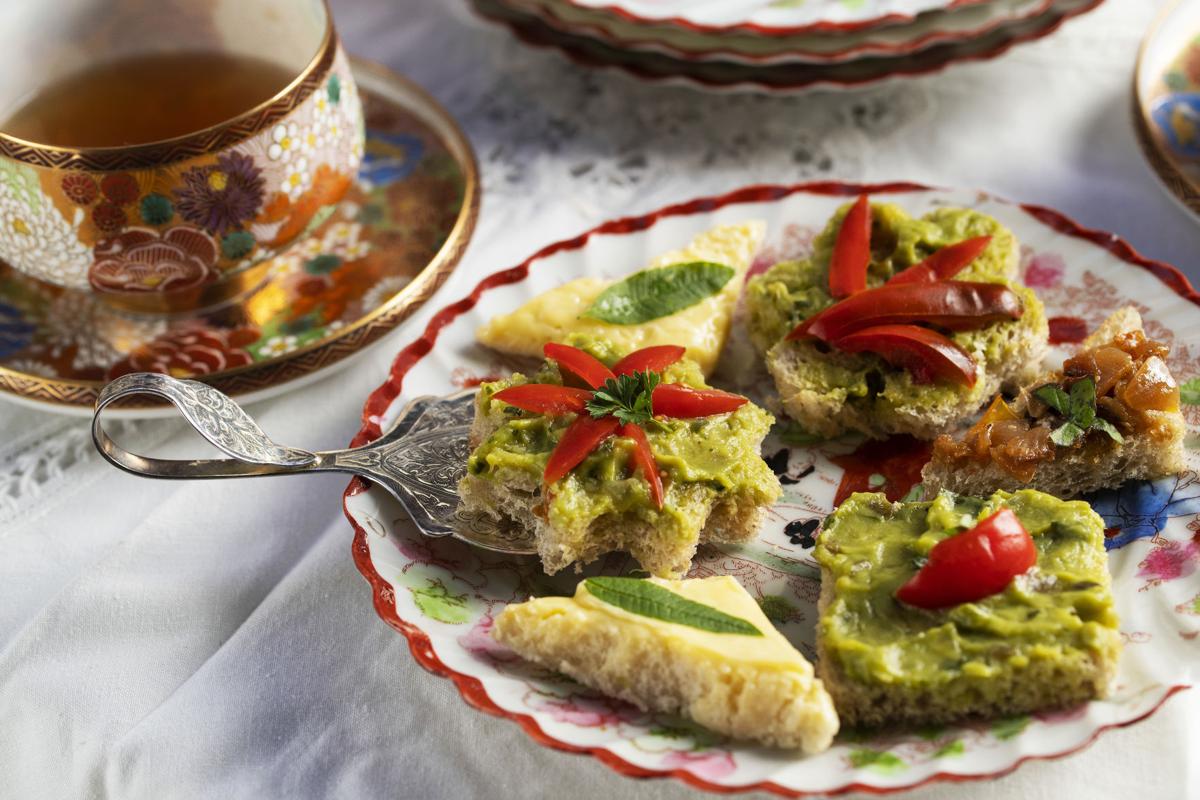 Rye bread with guacamole and tomatoes, white bread with butter and lemon verbena, and rye bread with ratatouille is paired with tea at Nathalie Dupree's on Thursday, October 31, 2019. Food styling by Lauren Furey and Donna Gill. Lauren Petracca/Staff 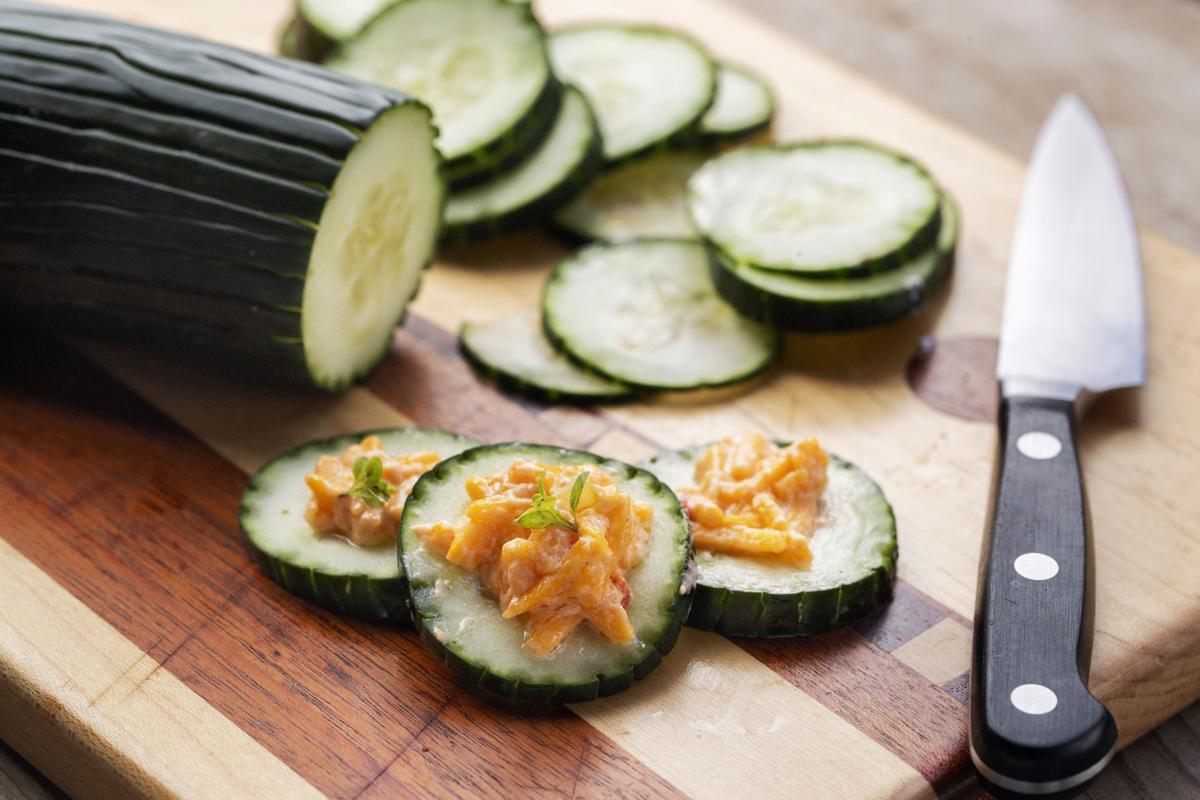 As a child, I had a tea set and regularly served iced tea in tiny cups to my dolls.

Now, as an Anglophile, I’m partial is what is called “Afternoon Tea,” a shorthand reference to an English ritual that includes a pot of tea; a china cup and saucer; lemon or milk to add to the tea, and possibly an etagere. Upon that tiered server, a selection of tiny sandwiches reposes, along with tarts; fruit and plain scones; clotted cream; strawberry jam; meringues and various cakes or confections.

This repast is capable of tiding one over until a late supper, maybe after having gone out for the evening. But it is not supper, as a High Tea would be, which is primarily for the “working class” and perhaps some children and their nannies.

Hosting a joint Les Dames d’Escoffier fundraising tea with Paige Crone in Charleston recently, I realized with a shock I hadn’t made scones in at least 20 years. Over those 20 years, the scones most commonly seen in the South have been griddle scones, which are flatter and more triangular than the traditional scones I longed for.

The proper scone for a tea is more like a biscuit, usually with the addition of an egg. It’s a bit more cakey and not as flaky. We hardly see the traditional clotted cream here, although it is easily available at upscale grocery stores.

While living in London during the early 1970s, and during many trips before and after, my favorite place to meet has been Brown’s Hotel in Mayfair, the oldest hotel in London. It provides a grand introduction to afternoon tea, with cheerfully correct waiters; comfortable, if less gilded, decor than the Ritz, and a lightly tinkling piano.

Although strict dress rules are rarely imposed, those wearing blue jeans with manufacturer-torn knees are tucked away from view, with the properly dressed guests more prominently seated in the more visible entrance area.

A glance at the Brown’s Hotel website revealed an updated afternoon tea menu, including avocado toast, so I realized anything could be served in a Southern Afternoon Tea, including the tea. Brown’s offers 17 or 18 types of tea, whereas ordinary hosts may choose to serve five or six, or only one.

I learned as much preparing for this tea as after it, when more information came pouring in from attendees and aficionados to use for the next one. Clotted cream is correctly put on the scone after it is slathered with jam, according to English Vogue, whereby Devon Cream (which I have not seen in Charleston) is correctly applied before the jam (usually strawberry.)

I also learned finger sandwiches are (logically) eaten with ones fingers. Many pictures show them on the bottom of the etagere while others picture them on the top. Rarely are they seen on the same tier with sweets, but if serving on china plates and delicate platters, they can be scattered willy-nilly.

One article I read said although loose tea should always be used for an afternoon tea. Little silver strainers should not be put over the tea cups, but the story did not explain what to do without the strainers, perhaps resulting in tea leaves between ones teeth, like spinach in nightmares. I ignored that article and used the strainers.

People do not wear white gloves anymore. Lifting one's pinky finger is not considered good form. Do not dunk scones or cakes. Do eat dainty, gooey pastries and cakes with a fork, but scones with a “guiding hand.” (I do not know what a guiding hand is in the case of a scone but suspect it means not to drop it on one’s good clothes or the tablecloth.)

Incredulously, I’ve learned how much debate there is about which comes first, the tea or the milk. Someone sent me an article definitively asserting that since some people (90 percent of English tea drinkers) use a tea bag, it is clear the milk should come last. I mean, think how unsavory it would it be to add milk, then a tea bag.

On this topic, Martin Amis said, “It was a bad thing to be miffy. Being miffy meant that you were the kind of person who, when pouring a cup of tea, habitually put the Milk in First.”

Of course, an extra pot of hot water should be served to dilute any overbrewed tea (a big no-no in itself.) Some insist the milk itself should be hot. Others not.

I’m saving the worst for last. Scone is not pronounced with a long “o” but as “scon,” a totally unnatural pronunciation for me and perhaps for you.

Following are suggestions for an easy tea for family and friends.

How to serve: Crustless, primarily in finger-size rectangles or triangles, but as always, diversity of shapes and colors delight the eye. All the fillings for the sandwiches should be made ahead or purchased, and the sandwiches assembled later. Cover with a lightly damp paper towel, and refrigerate for an hour or two at most.

Nathalie Dupree shows you how to save time, money and plastic with homemade egg breakfasts

Makes one loaf or 20 tiny molds

The aroma of gingerbread spices permeates the room during baking, which makes it a shame to cook ahead of time. But it freezes so well, whether in small molds, muffin tins or a loaf pan, it’s worth sacrificing the aroma on the day of a tea.

Butter a 9-by-13-inch pan and line with parchment or waxed paper. Butter the paper. If using molds, brush with melted butter or oil, cut paper to fit, push in and brush with the fat again.

Beat the sugar and butter together with an electric mixer until light. Add the egg and molasses, and beat well to mix.

Sift the dry ingredients together onto a piece of waxed paper.

In a separate bowl, combine the buttermilk, bourbon or apple juice, and flavoring. Alternate adding the flour mixture and milk to the egg mixture, beginning and ending with the dry ingredients. Beat after each addition. Beat if necessary until smooth.

Pour into the prepared pan or pans and bake on the middle rack for 15 minutes for small molds or 30 minutes for a loaf pan until a fork comes out clean. Remove from oven and let cool on a wire rack 10 minutes. Lift the bread out of the pan, remove the paper, and let cool on a rack. Serve.

Memory-triggering madeleines suddenly having a moment in downtown Charleston restaurants

The "Swiss" method insures nice crisp meringues. Free of cholesterol (unless you choose to add a filling such as whipped cream or ice cream), they really are one of the easiest of all desserts to make.

When cooking meringues, remember you are really "drying,” not baking them. Ideally, they are slightly more ivory than beige. Many people, however, prefer a true beige, when they have a slightly caramel flavor. Knowing your oven is important. Many do not have an easily regulated low temperature. The first time you make them, keep checking and adjust the time according to your oven.

Meringues should not be made the day you want to serve them. They do best made with no pressure of time, as they have their own minds and dry out according to the humidity of the day. They are best avoided in rainy, humid weather, as is most sugar work. If thoroughly dry, meringues will last for a week in a tightly-covered container.

Preheat the oven to 250 degrees.

Place the egg whites in a bowl and whisk with a balloon whisk or electric whisk until they form very soft peaks. Set the bowl over a pan of simmering water and whisk in the sugar. Add the vanilla. Continue whisking until the mixture forms a stiff peak, 5 minutes with an electric mixer, more by hand. They need only be beaten until they form a stiff peak and do not slide in the bowl. If beaten too long, they look rocky and start to separate. Remove from the heat and continue whisking until the meringue is cool.

Using a pastry bag and large star tube, pipe 3-inch rounds of meringue onto parchment paper; a nonstick baking sheet, or a greased-and-floured baking sheet. (You may also shape mounds with 2 tablespoons.)

Bake until firm and ivory colored, 1 to 2 hours. If the meringues are to be filled with whipped cream, ice cream, or a favorite yogurt, turn them over when almost cooked, crack the center of the base to hollow the shell, and continue baking until dry.

Nathalie Dupree is the author of 14 cookbooks, including the James Beard award-winning “Mastering the Art of Southern Cooking.” She lives in Charleston and may be reached through Nathaliedupree.com.