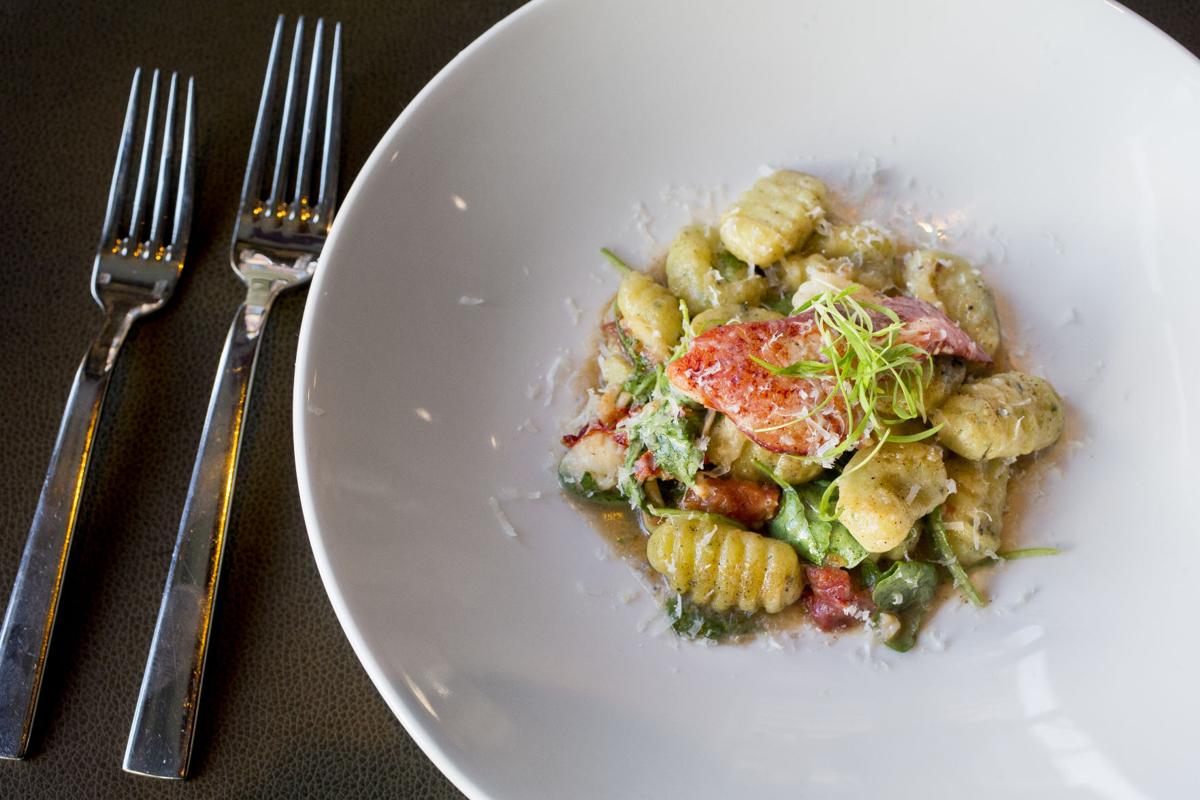 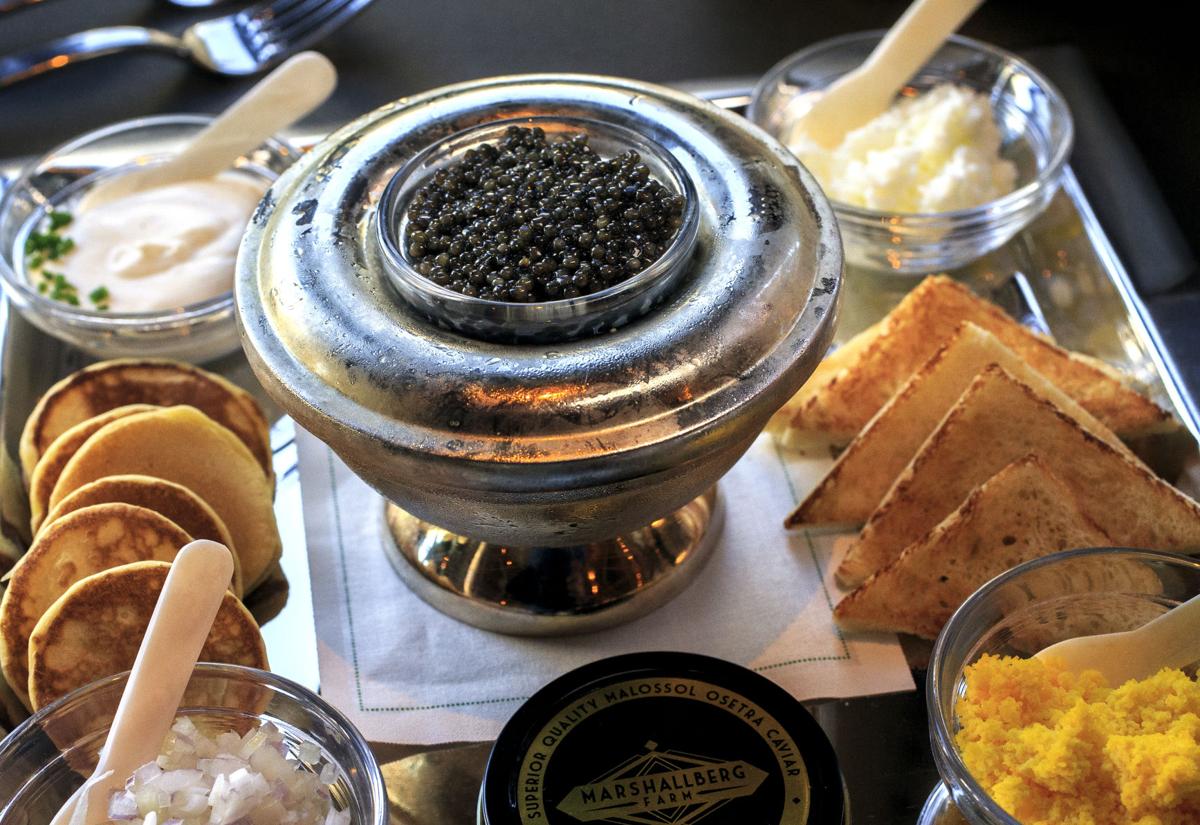 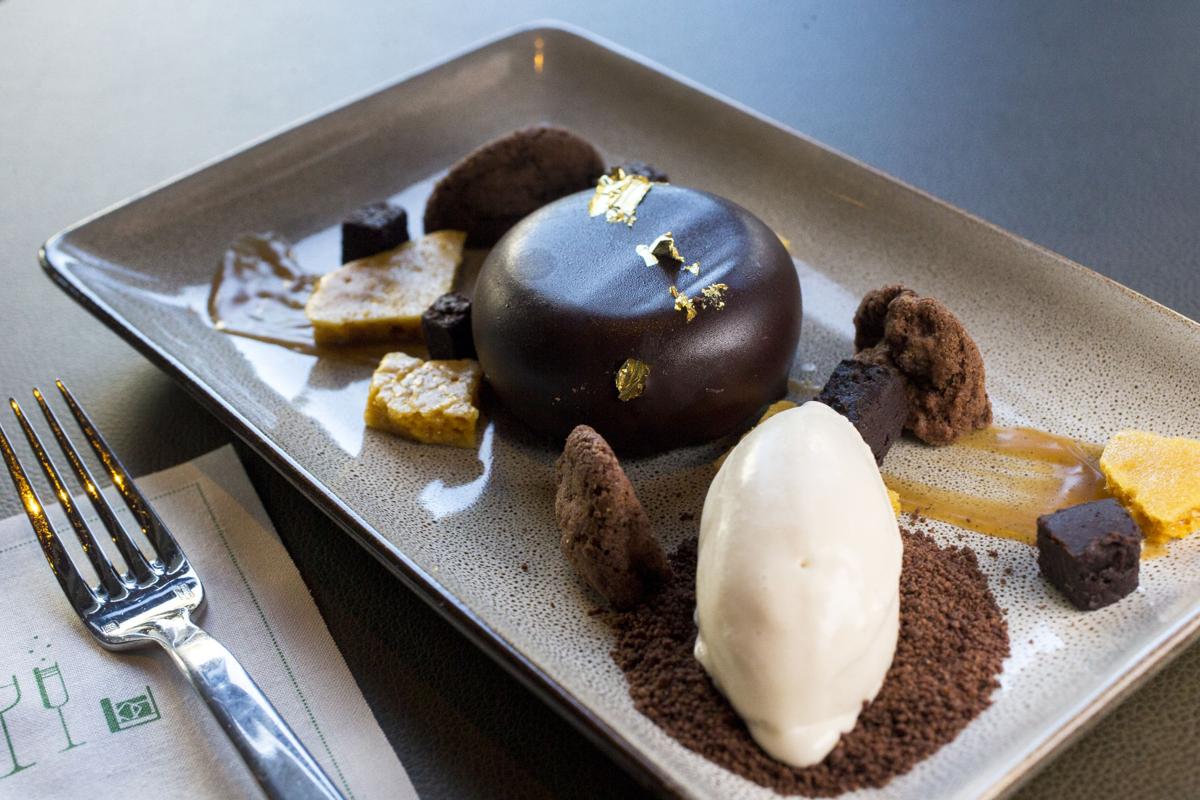 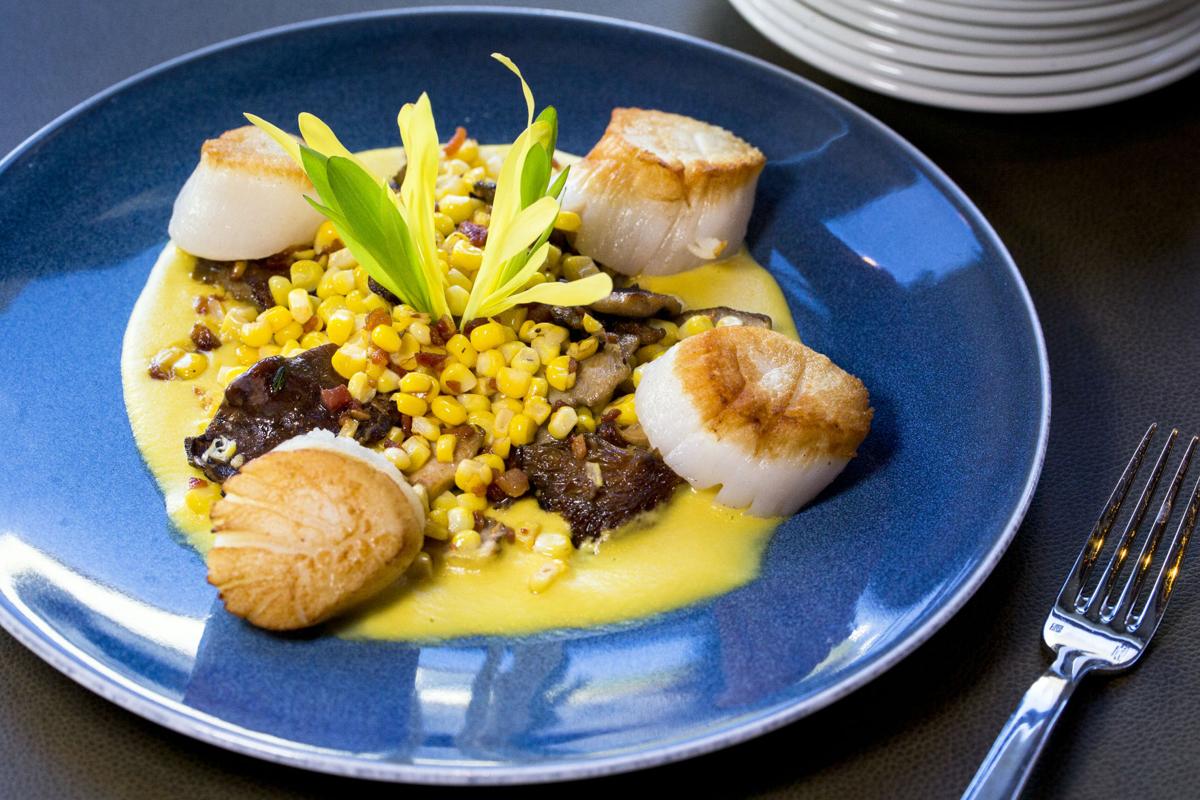 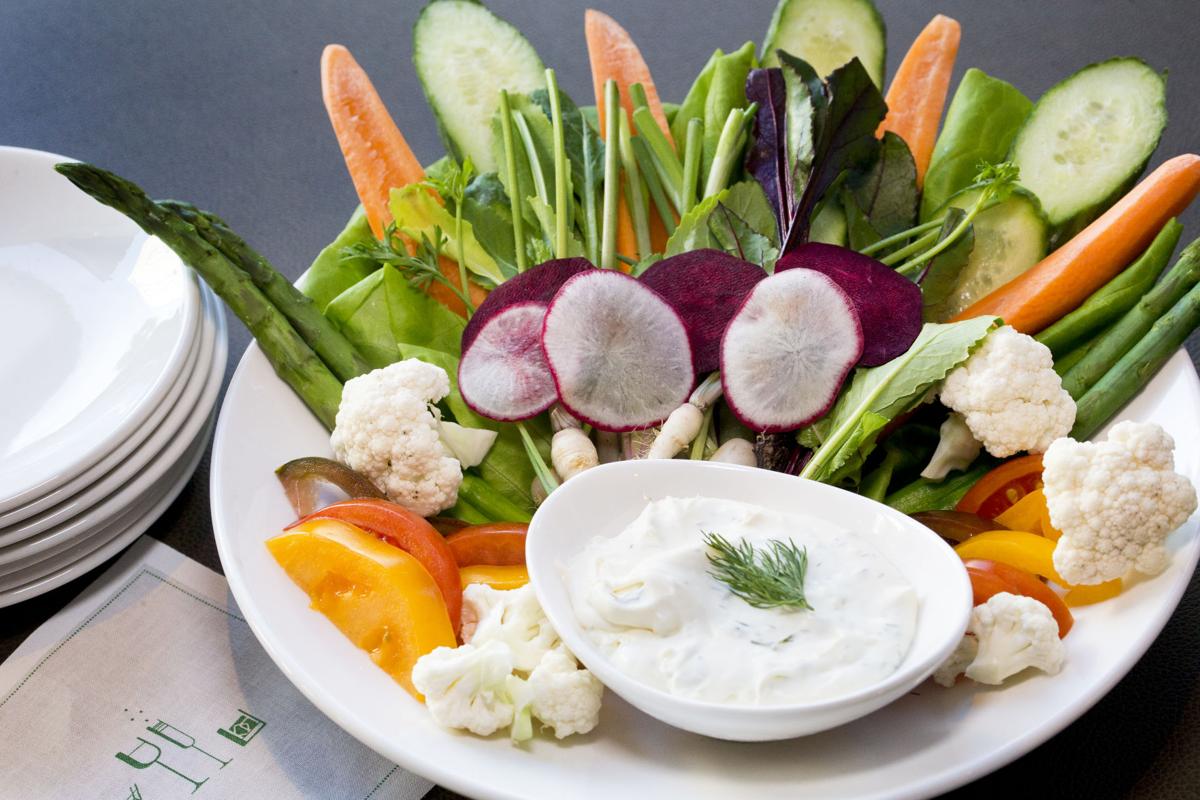 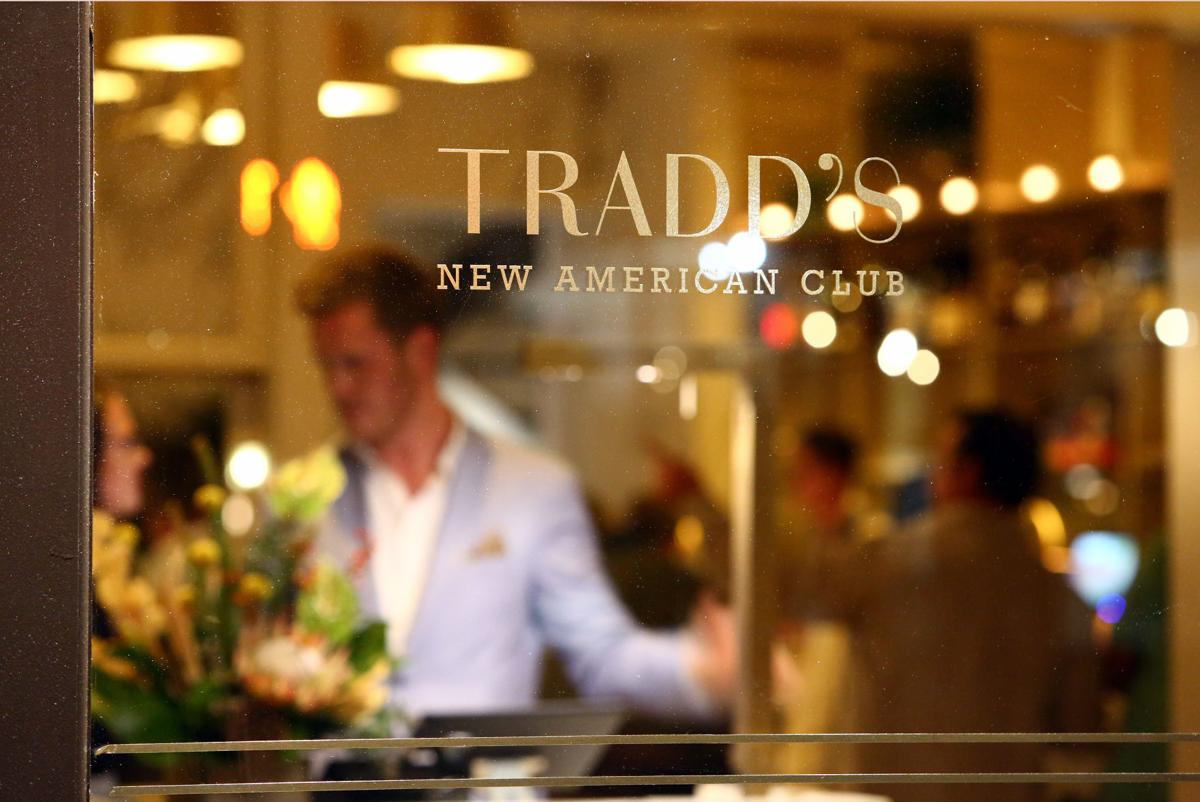 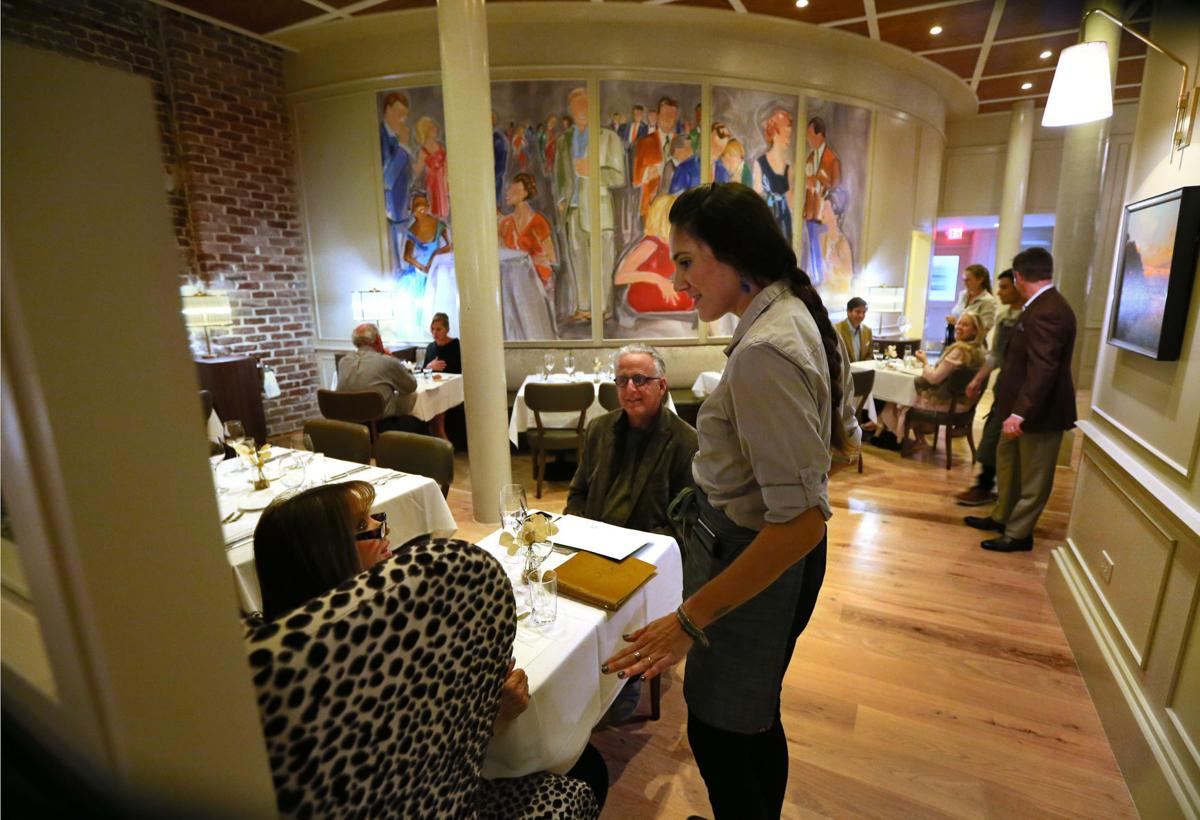 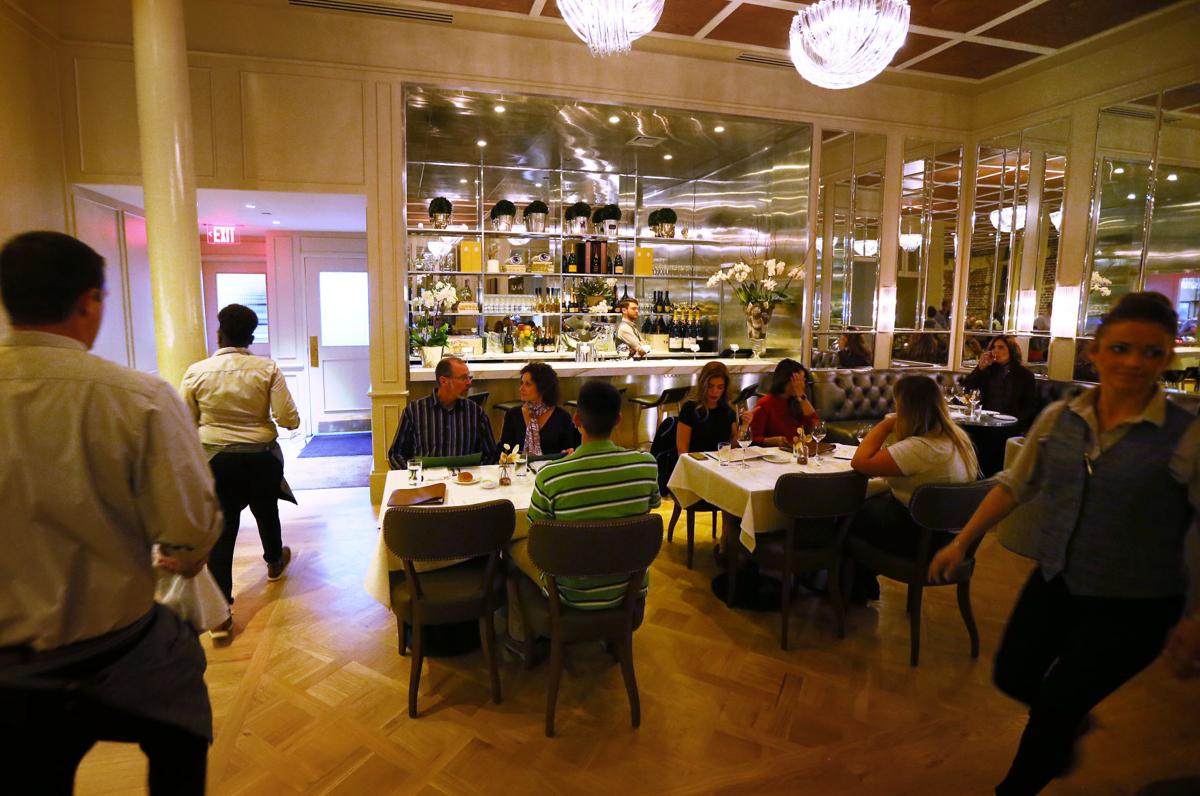 A champagne bar fills the back wall at Tradd's, which is now open on East Bay Street at Queen Street, in the former Cypress location. Wade Spees/Staff Thursday, October 25, 2018

A champagne bar fills the back wall at Tradd's, which is now open on East Bay Street at Queen Street, in the former Cypress location. Wade Spees/Staff Thursday, October 25, 2018

If there was one dish I couldn’t leave Tradd’s without trying, according to a server on my first visit to the luxury lair that’s taken over the space which once belonged to Cypress, it was the sunchokes.

Describing their roasty shells and creamy centers, the server interrupted himself at least once to reassert their splendor. Obviously, I was getting the sunchokes.

The server’s enthusiasm wasn’t misplaced. The resonant sunchokes were probably the best-tasting thing I ate over the course of three visits to Tradd’s. But we have to have a little talk about sunchokes, usually referred to as Jerusalem artichokes by old-timers around the Lowcountry (if you know any, ask for a relish recipe.)

In addition to being delicious, sunchokes are notorious for causing brutal gastric distress. The culprit is a fiber called inulin, which most human digestive systems treat as an invader. Researchers say the extent of ill effects vary by eater and sunchoke, but the phenomenon is so well-documented that Bon Appetit has quoted Danish super-chef Rene Redzepi, who made his name serving green moss and ants, as saying it’s irresponsible for a restaurant to put sunchokes on its menu.

What Redzepi meant, I’d guess, is hospitality isn’t limited to the time a guest spends at table. Just as a restaurant ought to politely field a pre-dinner phone call inquiring about vegetarian options, it shouldn’t condemn its customers to a sick day after they leave. In other words, a chef should consider the consequences.

But Tradd’s isn’t the kind of place to think about consequences. It actively encourages an “isn’t this crazy world grand?” attitude, which may feel more or less forced, depending on your place of privilege within it. For Tradd’s to cope with the comfort toll of sunchokes, it would have to reckon with earthly realities and individual differences, which are so far removed from Tradd’s wheelhouse that they’re not even on the same boat.

Tradd’s in no way tries to conceal this inclination. The evidence is on the walls, which are hung with an oversized pentaptych painting of faceless people in formalwear, and smaller portraits of melancholic Native Americans in full traditional dress. It takes a very blithe spirit to look past what the art might mean.

Of course, it must be liberating not to worry about it, or about much of anything else. “He’s a good guy: I just don’t ever want to play golf with him again!” a man one night announced to appreciative peals of laughter from his dining companions. A woman at another table received a similarly warm response when she looked pityingly at one of the younger members of her group and said, “After your second marriage, you’ll understand!”

They don’t come for the food, presumably. For the most part, the food is just mildly bad: Nobody here is interested in making a stir, least of all the cooks, led by chef Drew Hedlund. (Hedlund previously ran the kitchen at Tradd and Weesie Newton’s other restaurant, Fleet Landing.) But there are a few howlers in the mix, including a disaster of a crudite platter, which was recently struck from the menu. The slimy asparagus and mealy tomatoes won’t be missed, nor will the mound of accompanying sour cream with a frail sprig of dill belly-flopped at its center.

Crudite was something of an outlier at Tradd’s, with only a French name to disguise its simplicity. The vast majority of menu items sound like what you’d eat if Lex Luthor was ordering: The appetizer column alone includes crab cocktail, foie gras, beef tartare, escargot, lobster gnocchi and caviar at five different price points, ranging from $38 for Midwestern shovelnose roe to $125 for golden eggs from Russian sturgeon.

I couldn’t afford to find out how the premium variety is presented, but the mid-range caviar is scooped into a silver seafood server that’s lit peacock-blue from within. It’s surrounded by the traditional fixings in glass ramekins, so eaters can smear creme fraiche on their blinis as they toss back Champagne.

The caviar is fine. The caviar is salty. The same can’t be said of the aforementioned gnocchi or the ivory-hued melange of turnips and spaetzle supporting very rare slabs of duck, both of which were desperately under-salted. Neither flavor nor fragrance registers as a particularly high priority at Tradd’s, where a startling number of dishes have no discernible aroma at all: The expected zing of citrus vinaigrette on an overheated crab cocktail and licorice-like warmth of tarragon butter on a sloppily assembled set of escargot never materialized.

It’s not all bleak. Scallops burrowed in sweet corn puree are properly seared, and there’s a satisfying whip of peas sharing the halibut plate with what amounts to carrot custard. If you’re not bothered by slightly burnt potato chips, the lavishly oiled beef tartare applied to them is likely to win over fans, as is the rich orb of chocolate cream that here gets the coveted “chocolate decadence” title. A server told me the most popular entree is veal scaloppini, a statistic that seemed less surprising after seeing how thinly the beef is pounded. I can’t be sure how many people actually finish the noodles, swimming in veal reduction.

Front-of-house employees at Tradd’s must be among the hardest-working folks in the business, since I lost count of how many of them said they’d waited on me at one place or another. It felt at times like an episode of “This Is Your Dining Life,” except that not all of their reminiscences were precisely accurate. In any case, the staff didn’t pretend to treat me like a regular customer, which is the more typical drill: Just about everyone I encountered called me by name.

Also in the spirit of full disclosure: I was always seated on the edge of the dining room, which meant I had to peer around columns and through a statuesque interior room divider to decipher the fun that the patrons tucked into banquettes were having. At least from the periphery, it appears that Tradd’s is a blast for insiders.

Photos: A look at Tradd's in downtown Charleston