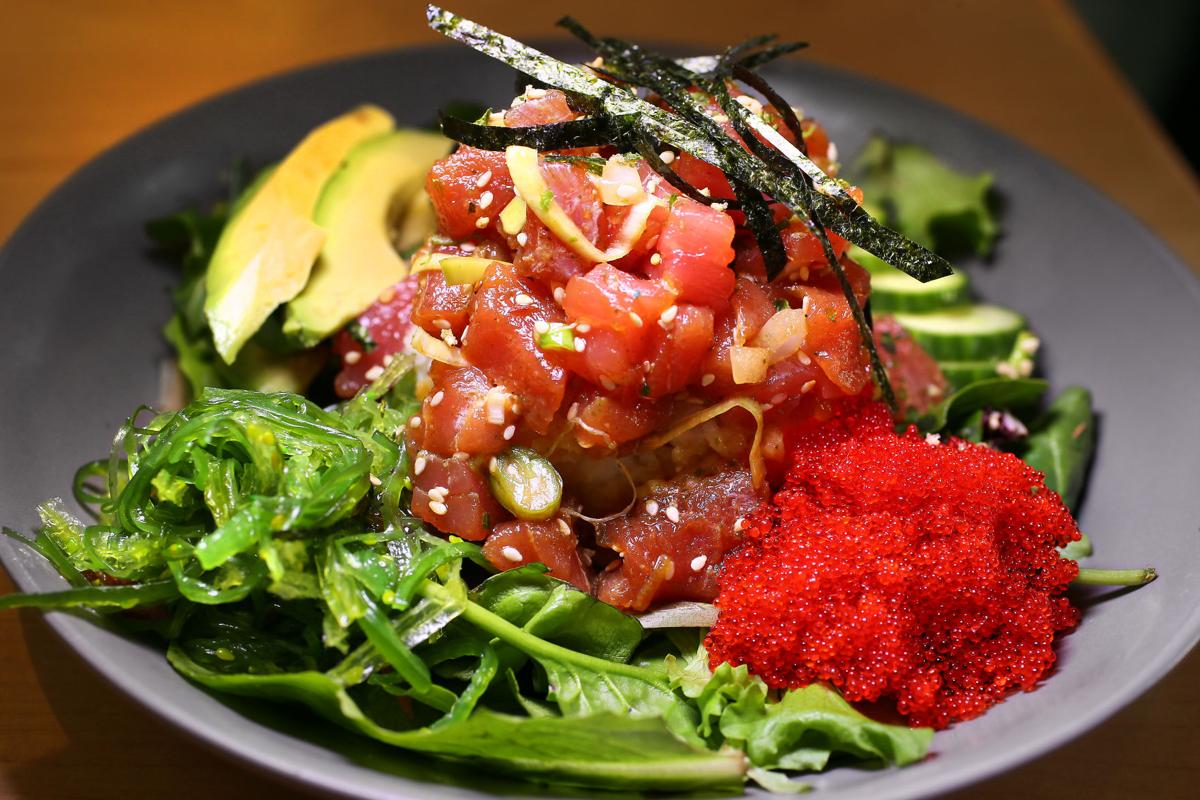 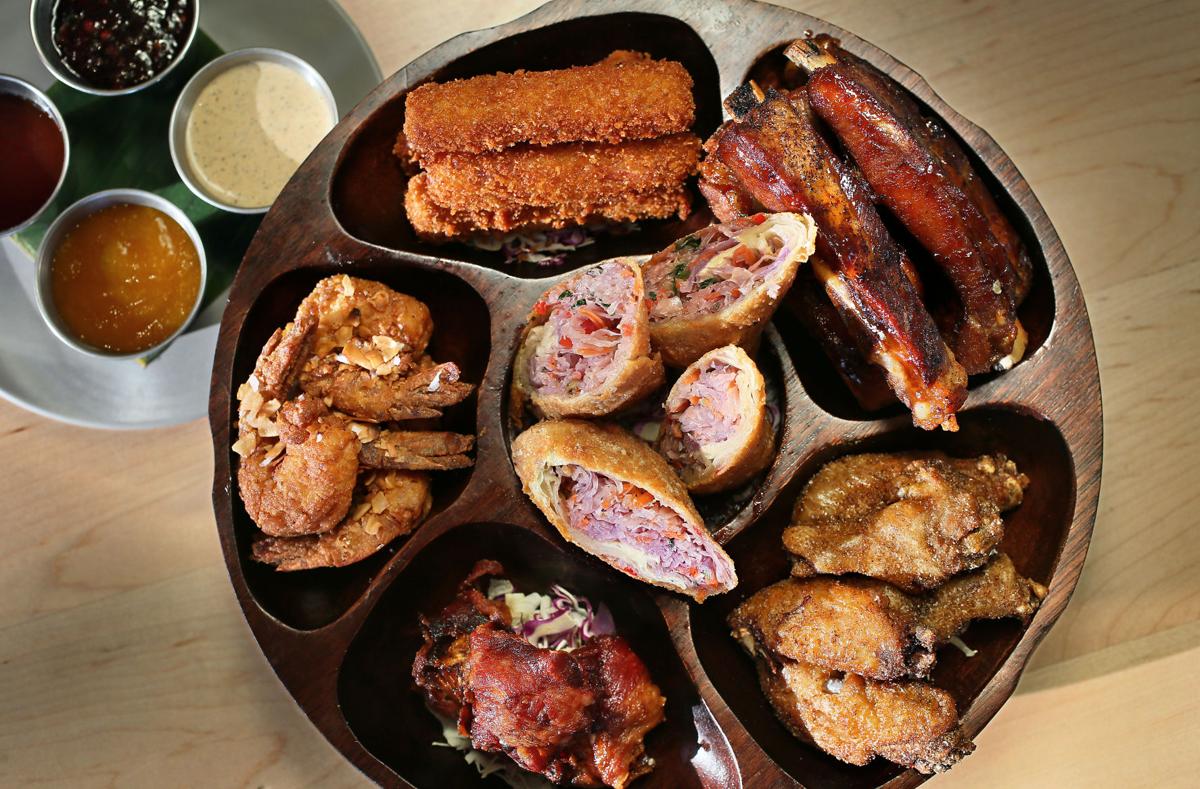 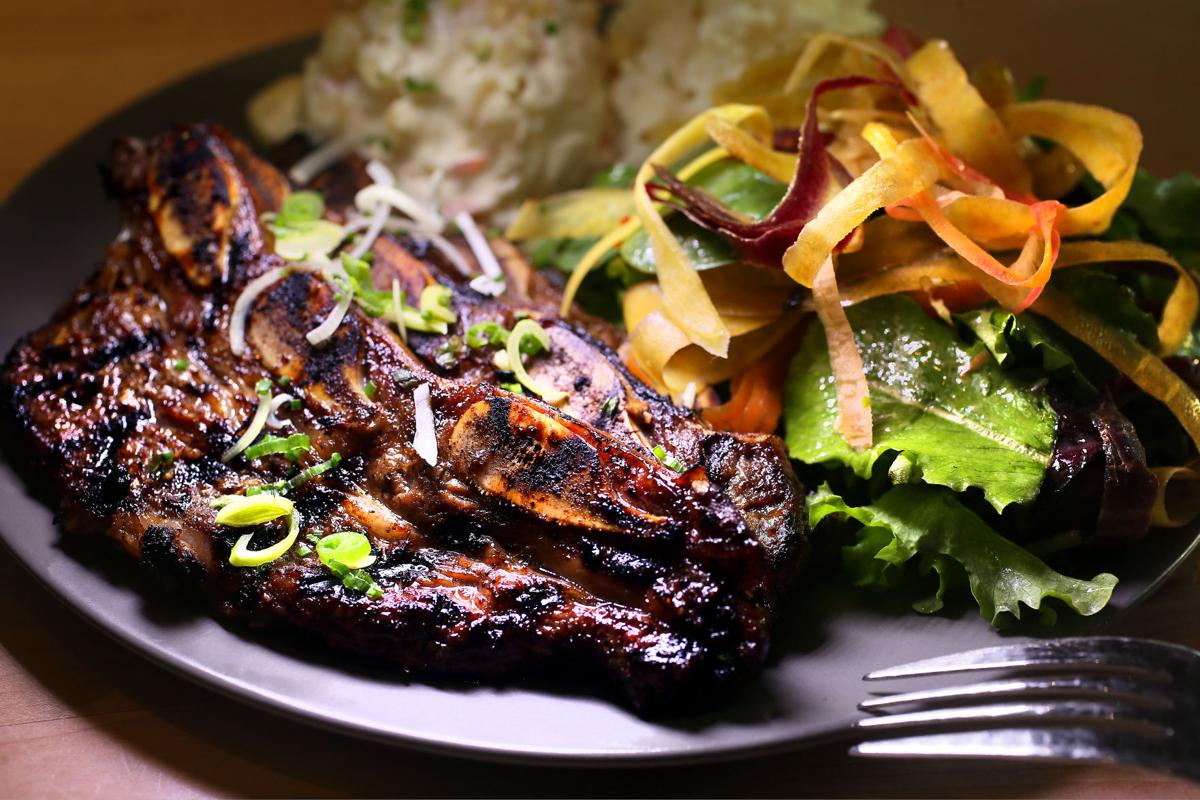 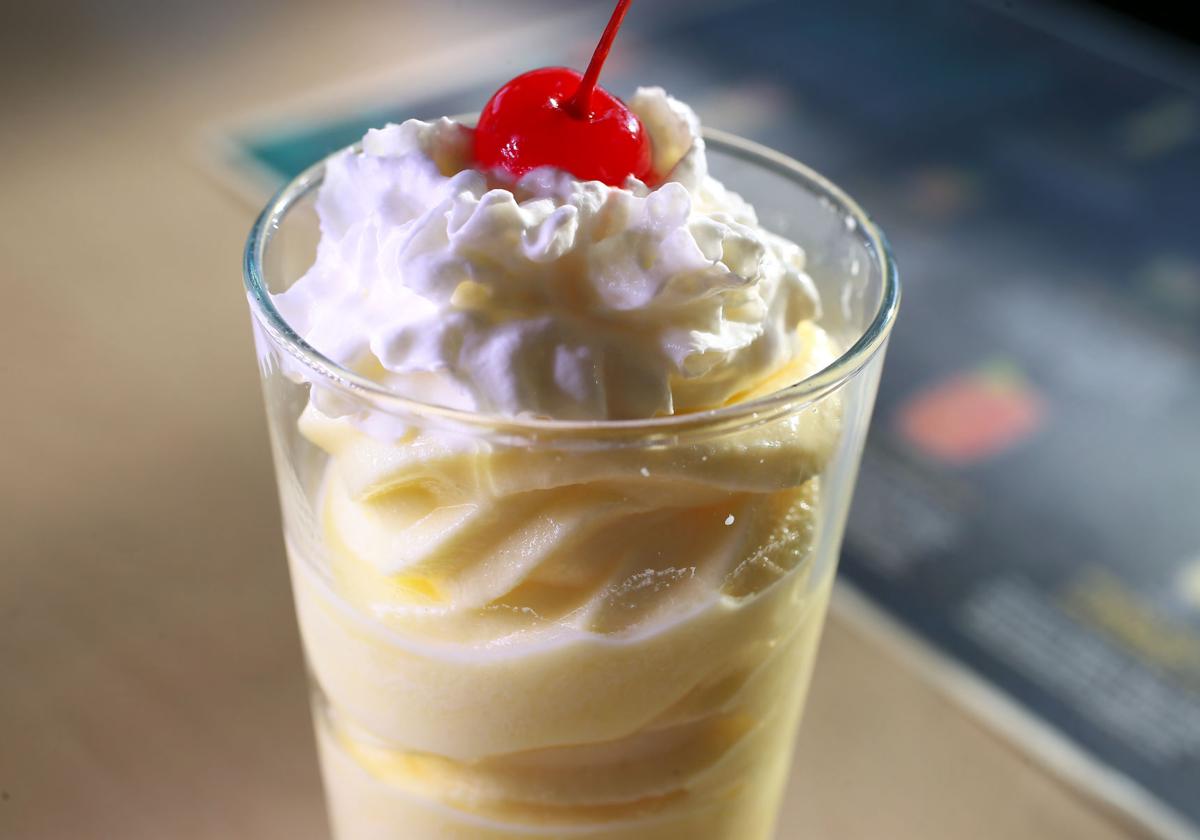 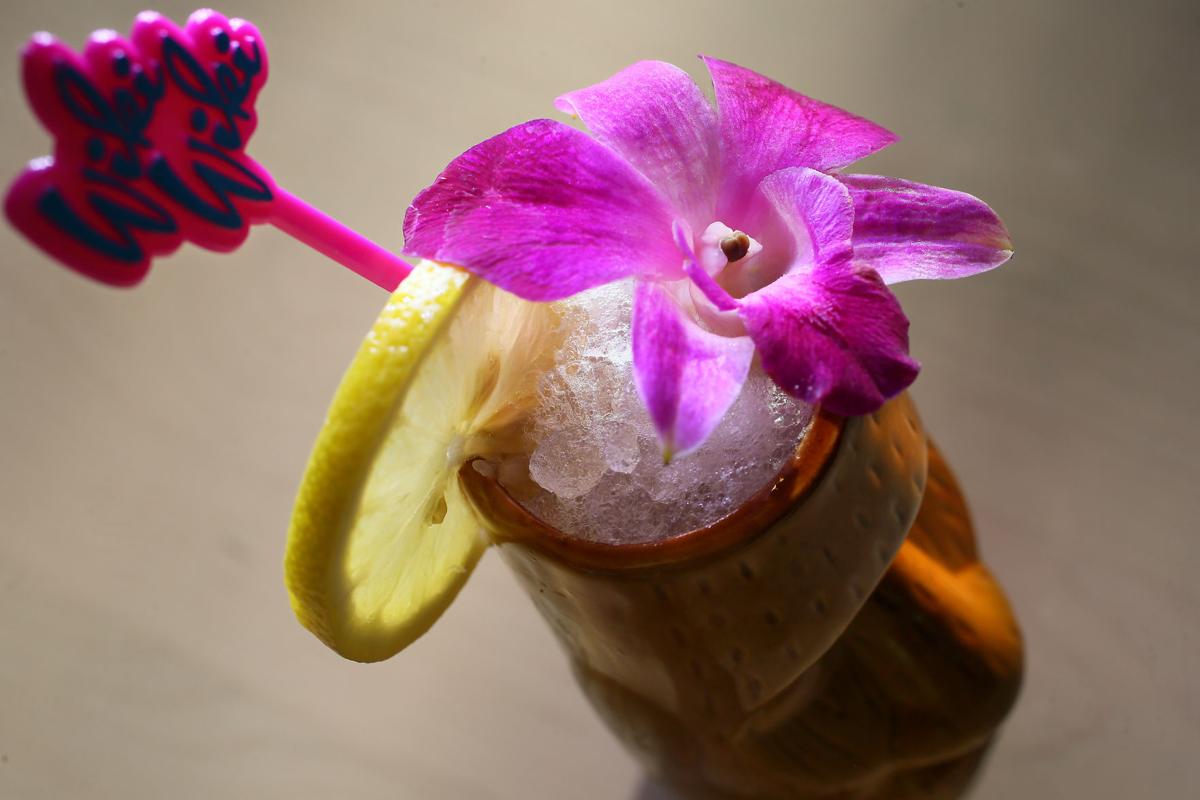 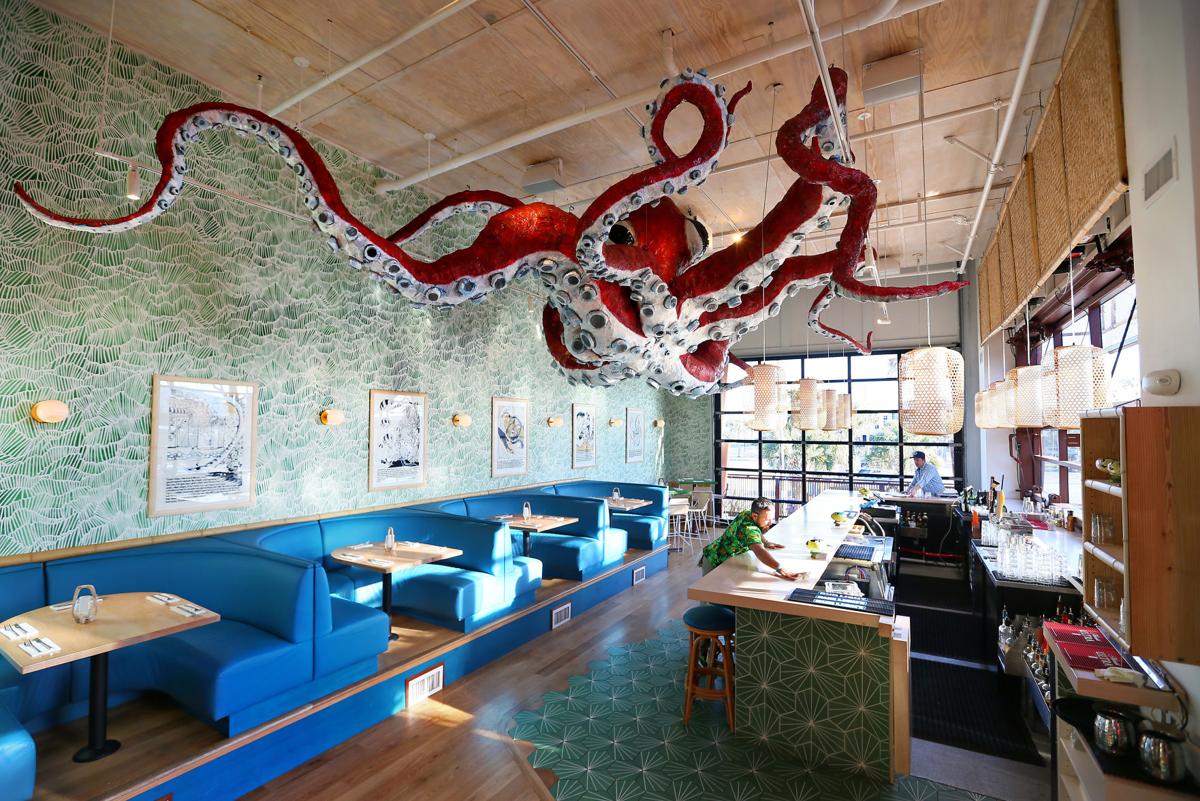 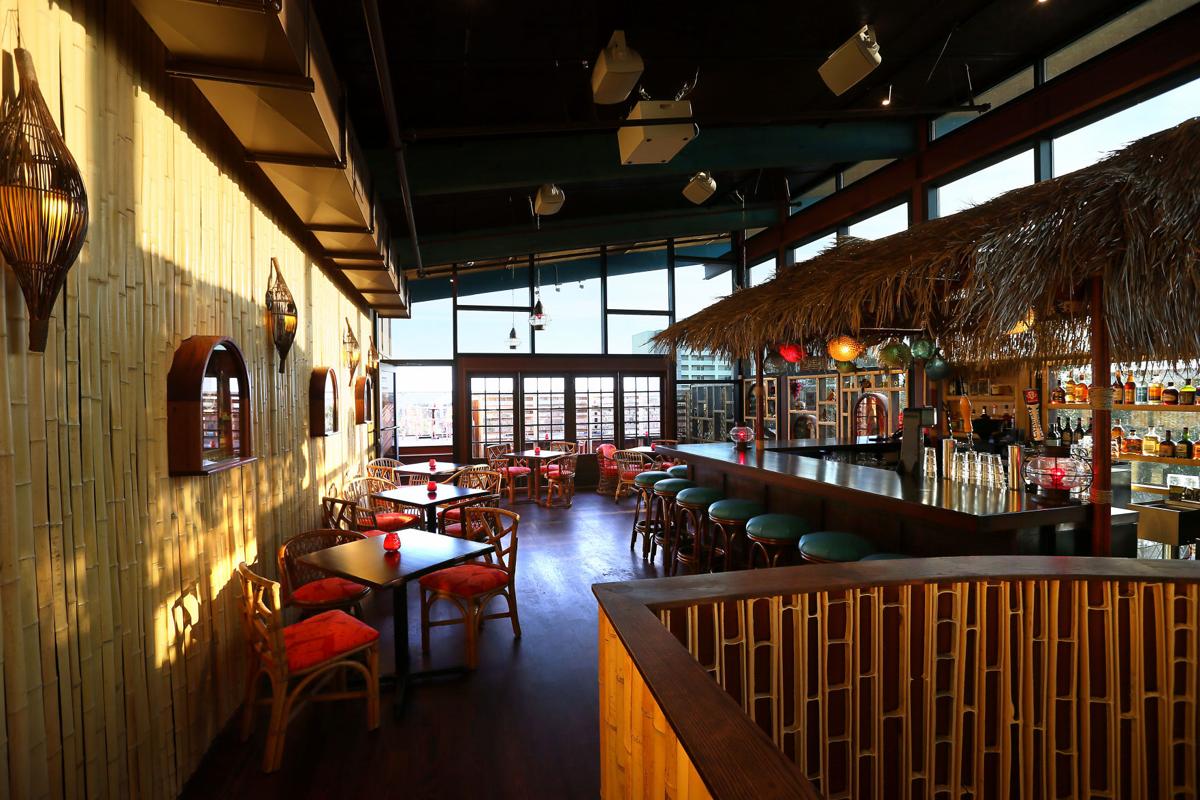 Even if you tried, you couldn’t take home most of the decorative elements at the exhaustively designed Wiki Wiki Sandbar.

There’s no smuggling out, for instance, the jumbo octopus suspended over the barroom, its beach dross-enhanced legs beckoning toward customers seated in blue vinyl booths below. Nobody’s going anywhere with the ornately carved front door, which looks like a portal to the final stage of a volcano-themed video game.

But the massive Folly Beach restaurant, which measures three dining rooms and 6,500 square feet in all, gets that guests might want to claim a sliver of the Polynesian daydream devised by architect Kevan Hoertdoerfer and graphic designer Gil Shuler, with valuable assists from a number of local artists. So every dropped check is accompanied by a branded postcard for a diner to either pocket or, in full-on vacation fashion, fill out with details about his or her easy-breezy Wiki Wiki stay.

Once completed, the card can be returned to the bar for stamping and sending, explained a server who thoughtfully provided one card apiece for my guest and me.

What a fun idea! Sure, every customer who participates is a pawn in Wiki Wiki’s publicity game, but who cares? In a dining room that wouldn’t have existed before Instagram forced restaurateurs to reconsider every blank wall and lighting fixture, it’s awfully nice to be reminded of the romance of the U.S. Postal Service. Everyone loves getting mail.

Unfortunately, that’s where this bright scheme goes sideways. As of this writing, it’s been three weeks since I scrawled out a card for my guest and he addressed some version of “Wish you were here” to me. We’ve been faithfully checking our mailboxes, and the postcards are yet to appear.

It’s too cynical to think that Wiki Wiki trashes customers’ cards, and too unpatriotic to suggest that the post office screwed up. My guess is the truth lies somewhere in between: Perhaps the cards are still sitting in an actual outbox.

In any case, the restaurant’s good intentions spawned nothing but disappointment, which is an all too accurate summation of owner Karalee Fallert’s latest venture. Beachgoers who jam the indoor-outdoor complex this summer will likely be too besotted by rum and portholes framing internally lit pufferfish to notice, but Wiki Wiki’s dishes and drinks are a bit of a mess.

The conceit of Wiki Wiki, at least from a culinary standpoint, is that the Hawaiian Islands and the Lowcountry have more in common than residents of either place might have realized. Hawaiians call it plate lunch, and Southerners call it meat-and-three, but both cotton to seasoned pork with sides of white rice, greens and macaroni. They’re equally inclined to enjoy fresh seafood and canned goods (Spam there; boiled peanuts here). And the whole lot is generally pro-mayonnaise.

This congruence comes out in Wiki Wiki’s favor in the rice department. The restaurant uses Charleston Gold and prepares it with care, so the flavorful grains tucked beneath slices of marinated short rib and a chopped steak patty have just a scintilla of stick.

Otherwise, though, there’s scant menu acknowledgment of where Wiki Wiki is situated. Save for a dry crab cake sandwich, chef Jason Dupree's lineup is canonically Hawaiian, minus the saimin, poi and laulau that fiftieth staters might expect, plus a few standard tiki snacks to complement the sugary drinks sold in souvenir mugs (for an additional fee: Cocktailians who don’t pay the keep-it price are only entrusted with glasses.). Entrees include kalua pork, katsu and poke, fried fish and Spam are among the sandwich choices.

Wiki Wiki claims to make its own Spam, which doesn’t mean that it’s installed a ham-spicing factory (although Lord knows there’s room for it), but that it marinates Spam in brown sugar, cinnamon and thyme for 24 hours. Whatever nuance that process adds to the canned meat is obliterated by the breading and frying required to produce katsu: The crusty oblongs are indistinguishable in form and flavor from McDonald’s hash browns.

If you can stand the salt, that’s perhaps not a bad thing. But the shadow of industrial cooking darkens so many items that are presumably intended to conjure the sun-drenched tropics. Mac salad, a Hawaiian icon, at Wiki Wiki has a lifeless texture and bland character that usually requires mass production to pull off. Salad greens were wilted on one visit, and skinny fries were lukewarm on two different occasions.

Taking cues from chains isn’t a deal breaker in the Hawaiian context, as anyone who’s patronized a Zippy’s can attest. But it’s hard to imagine a line cook at any one of Zippy’s 24 stores signing off on Wiki Wiki’s interpretation of loco moco, which features an overcooked burger and shyly sheer gravy.

Other problems at Wiki Wiki range from the predictable — crab Rangoons and coconut shrimp pulled out of the fryer too soon, murky sauces, greasy egg rolls — to the puzzling. For example, a tuna tempura sandwich shouldn’t be confused with dessert, but the sweet garlic sauce that Wiki Wiki applies to its fish blurs categorical lines in an uncomfortable way. (The true dessert of soft-serve pineapple ice cream isn't half bad when dressed up as a sundae with coconut and caramel corn.)

Sometimes you get the sense that the Wiki Wiki crew just isn’t paying attention, whether to a glass that needs refilling or the amount of dressing poured over otherwise decent poke. Employees’ eyes are apparently trained on the coming busy season, for which the restaurant is so obviously designed that bartenders have a ready joke about it:

“How crazy is this place going to be in the summer?” a patron asked recently. With practiced timing, the woman fixing his drink responded, “Oh, we’re closing for the summer.” F&B comedy gold, right there.

Inattentiveness also infected Wiki Wiki’s original playlist, which was as all over the place as its pupu platter. Because I was accompanied on one visit by an ethnomusicologist with sharper ears than mine, I know it included a mambo arrangement of "La Bamba"; a samba drum sample and a few well-known salsa tracks, including a song that instructs listeners that they stand to die in this neighborhood if they’re not armed with a knife.

On my last visit, though, the barrio tributes had been replaced by the soft steel guitar strumming of Duke Kamoku and his Islanders. Suddenly, Wiki Wiki felt like it had moved closer to its inspiration. Even the mussels, seated in a buttery ginger broth, seemed plumper with the restaurant drifting back on course.

Maybe the restaurant will soon give diners more to remember it by than a forgotten postcard.

A look at Wiki Wiki Sandbar restaurant on Folly Beach