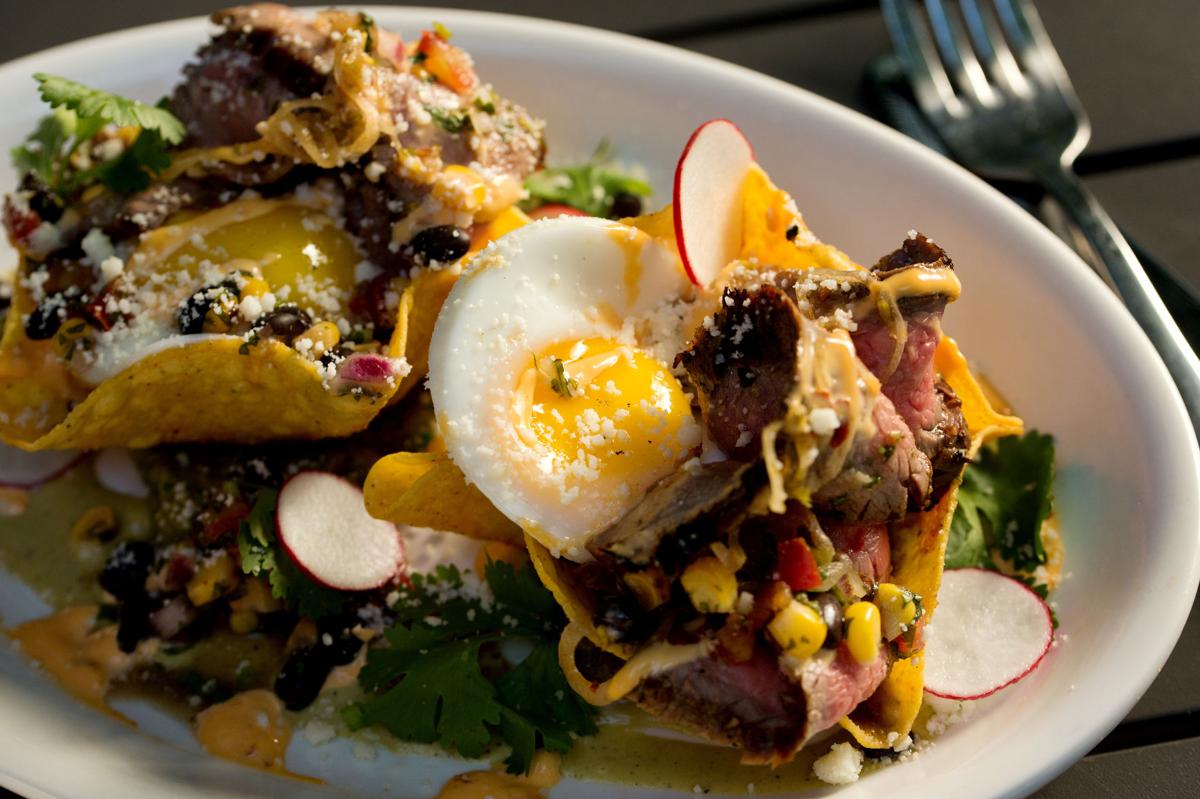 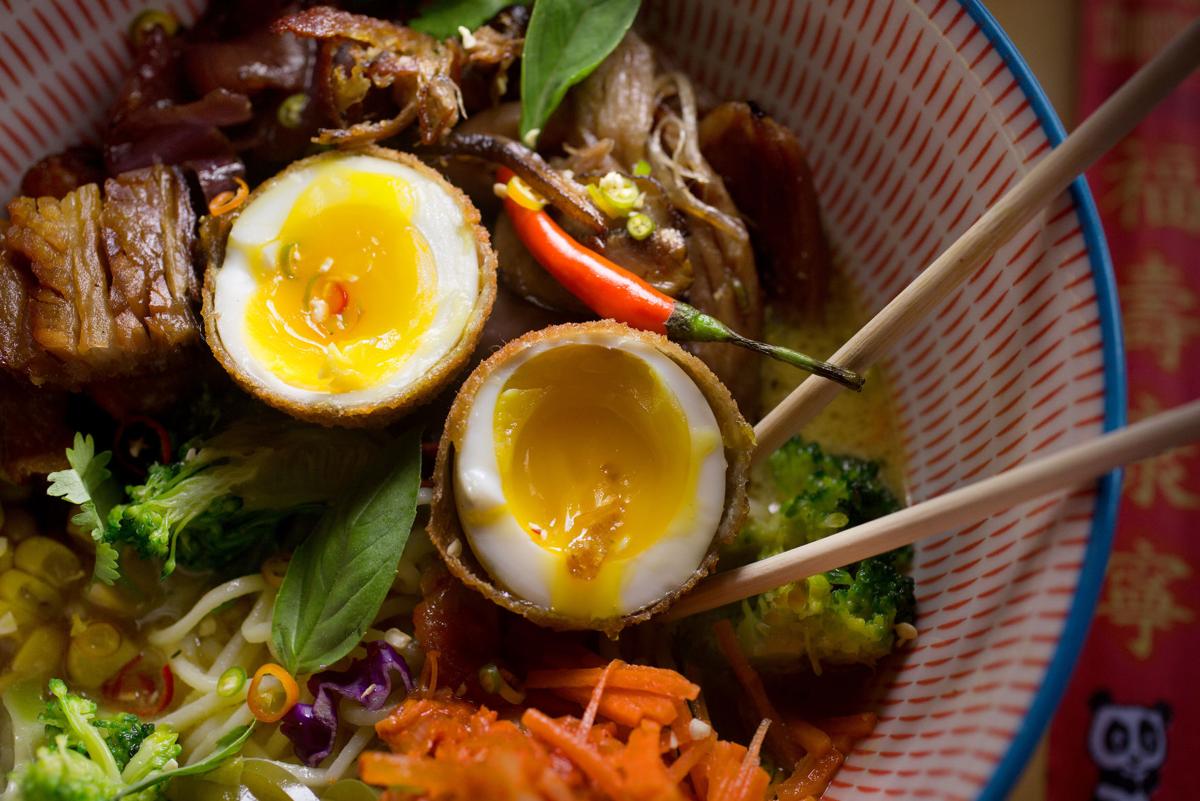 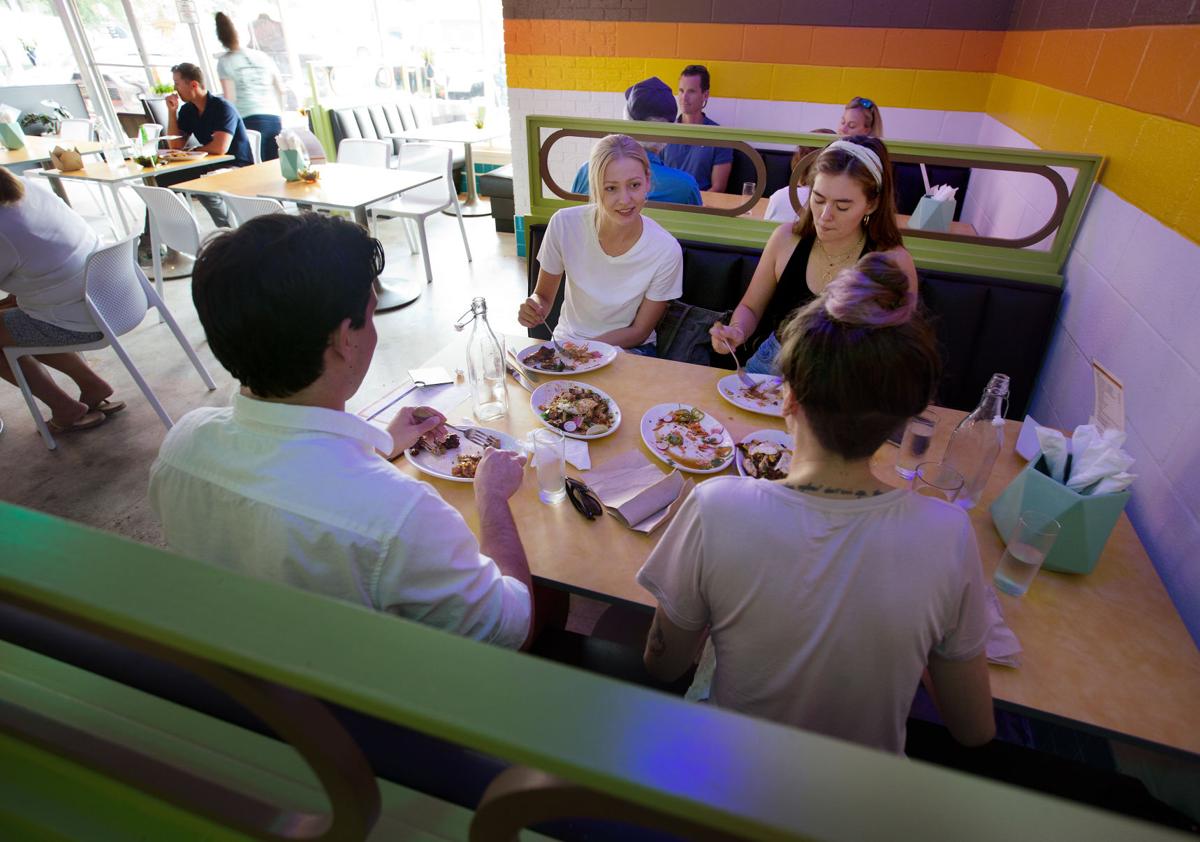 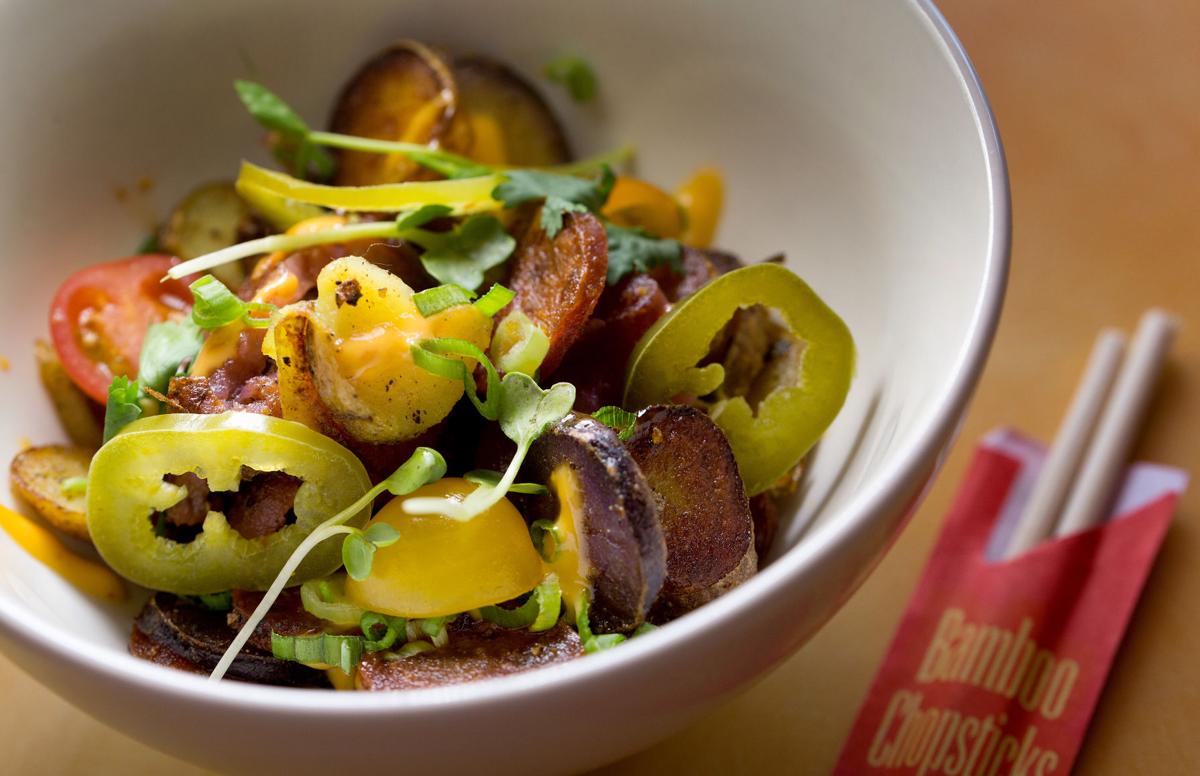 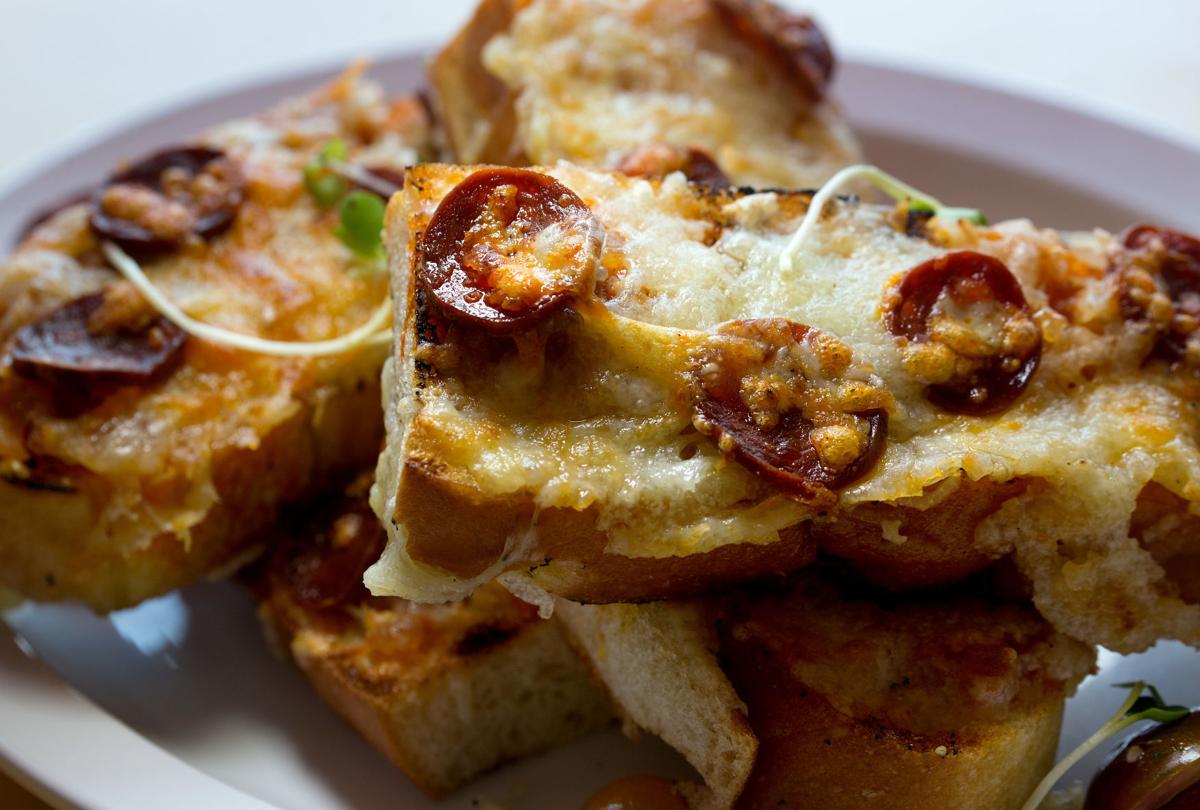 I’m telling you this because I suspect owners Stephen Thompson and Oscar Hines won’t. Potato salad isn’t the cool-sounding dish on their swaggering menu of snacks, sandwiches and noodle bowls. They’d probably rather bend your ear about the stand-alone soccarat, which is something like the Spanish version of a muffin top, except that the paella peel salute is flamboyantly unwholesome.

Or in the same menu category, they might talk up the fried rice and beans, one of the many dishes that hearkens back to the food truck which bore the Dashi name before Thompson and Hines found a permanent home on Remount Road.

So like a proud grandparent who spoils a grandkid’s street cred by revealing her aptitude for napkin folding, I’m here to kvell over the potato salad. It’s lightly dressed and served warm, which is part of its appeal. Far too frequently, the earthy flavor of potatoes doesn’t survive a frigid stay in a cooler. These tender potatoes, many of which wear different-colored jackets, are evenly diced and correctly salted. This is the side dish you want, regardless of whether the rest of your plate is occupied by a banh mi or a burrito.

What makes the potato salad an outlier, in addition to its simplicity, is its German heritage. Almost everything on Dashi’s menu is supposed to reference Asia, Latin America or, sometimes, Spain. Dashi makes its gimmick clear with its dessert lineup, which features soft serve sundaes done four ways: Thai, with peanuts and chili powder; Mexican, with cayenne and lime; Chinese, with black sesame and five spice or Spanish, with crumbled Maria cookies and cinnamon.

How’s that for a collection of culinary stereotypes?

And once you start reducing cuisines to a few distinctive ingredients, it’s not too much of a stretch to draw equally pat conclusions about the people responsible for them. When Dashi in 2015 debuted its truck, it was emblazoned with a rough sketch of a hatted man with slants for eyes and a fat moustache.

The Post and Courier at the time asked San Diego State University professor William Nerriccio, author of "Tex[t]-Mex: Seductive Hallucinations of 'Mexicans' in America," for his professional opinion of the logo. He charitably described it as a “mashup of the classic face of the sombrero-wearing ‘Mexican’ with what looks like a cross between WWII-era comic Asians and Mickey Rooney from Breakfast at Tiffany’s.”

Since then, Thompson and Hines have adjusted the face of their company. The hat has slid down over the man’s eyes, and a pair of chopsticks are now crossed beneath a spot approximately where his chin would go, implying a bowtie. Still, “less racist” is a pretty low bar to clear.

Thompson, who’s also the chef, has taken a similarly cavalier attitude toward the dishes he’s put together for the counter-service restaurant. Sriracha and sambal are applied willy-nilly, while pickled jalapenos and Thai chiles are shoehorned into every available cranny.

Consider what Thompson calls “duck ramen,” which is closer in spirit and taste to duck chowder with spaghetti. If you poke your spoon around the Scotch egg, kimchi and bean sprouts (logo aside, Dashi doesn’t provide chopsticks), you might find pickled jalapenos and corn bobbing amid the shredded pork belly. Can a dish be too clever by two-thirds?

One of the problems with smashing together diverse ingredients like trucks in a demolition derby is it arrogantly assumes that cultures didn’t cross-pollinate before white chefs came around to fuse them. If aioli doesn’t figure into cooking traditions in Thailand, or gouda hasn’t emerged as a kitchen staple in Mexico, it doesn’t mean those places were isolated from the rest of the world. It more likely means that those country’s home cooks over the years collectively said something along the lines of, “Nah, we’re good.”

In other words, there’s a logic behind how cuisines develop. And defying it is not in and of itself a way to make food interesting. At least at Dashi, it just makes everything salty. I lost count of how many times I refilled my water glass the night I tackled a cheesy fried rice burrito which eats like a Taco Bell Crunchwrap.

Monday's a tough night for dining in downtown Charleston, but here are 7 excellent options

It’s probably clear by now that this is stoner food. For diners who don’t want to think too hard about representation and appropriation (aka diners who skipped the last six paragraphs in hopes of finding out whether they should get tofu or shrimp in their pad Thai), Dashi offers a so-called tomato bread with manchego that’s a dead ringer for every French bread pizza you’ve microwaved at 2 a.m. It’s delicious.

Also: Get the tofu. It’s a clear violation of the stoner food code to pay much attention to ingredient quality, but outside of an after-party scene, it’s impossible to ignore that the shrimp in a grits bowl swamped with mild red curry sauce are scrawny and bland in comparison to the Charleston-area standard. The accompanying little bits of broccoli and bell pepper slivers are rather lackluster too.

Ultimately, most of Dashi’s dishes taste pretty much the same, thanks to the abundance of soy glazes, chili peppers and mayonnaise. The standouts are those dishes which are spared some or all of the above. In addition to the aforementioned potato salad and tomato bread, the brunch menu includes an outstanding steak-and-egg tostada that’s an intentional mess of shredded beef, fried eggs, cilantro-rich guacamole and sturdy tortilla chips loosely held together by a green chile cream sauce and dusted with cotija crumbles.

Flank occasionally also serves as the star of a steak plate burnished with a refreshingly pert chimichurri and vinegary red onions, grilled until soft. It’s sold in two sizes: 12 ounces costs $27; 6 ounces is priced at $14.

Fourteen bucks for a satisfying steak is a terrific deal, and made more so by Dashi being a really fun place to eat and drink. On the latter front, choices are especially impressive. The taps are devoted to local beers, and there’s a smart selection of sakes to round out the Spanish-leaning wine list. An accomplished whiskey sour sporting a Malbec float is representative of Dashi’s relatively elegant cocktails.

As for the dining area, it’s airy and bright, with windows lining two sides of the concrete-floored room. Splashes of vibrant color keep the casual space upbeat, along with the crowds: People are obviously grateful for a new restaurant option in the neighborhood. Affordable food in a comfortable setting might be all the gimmick that Dashi needs.

Charleston area Thai restaurants use star system for heat, but what do those numbers mean?