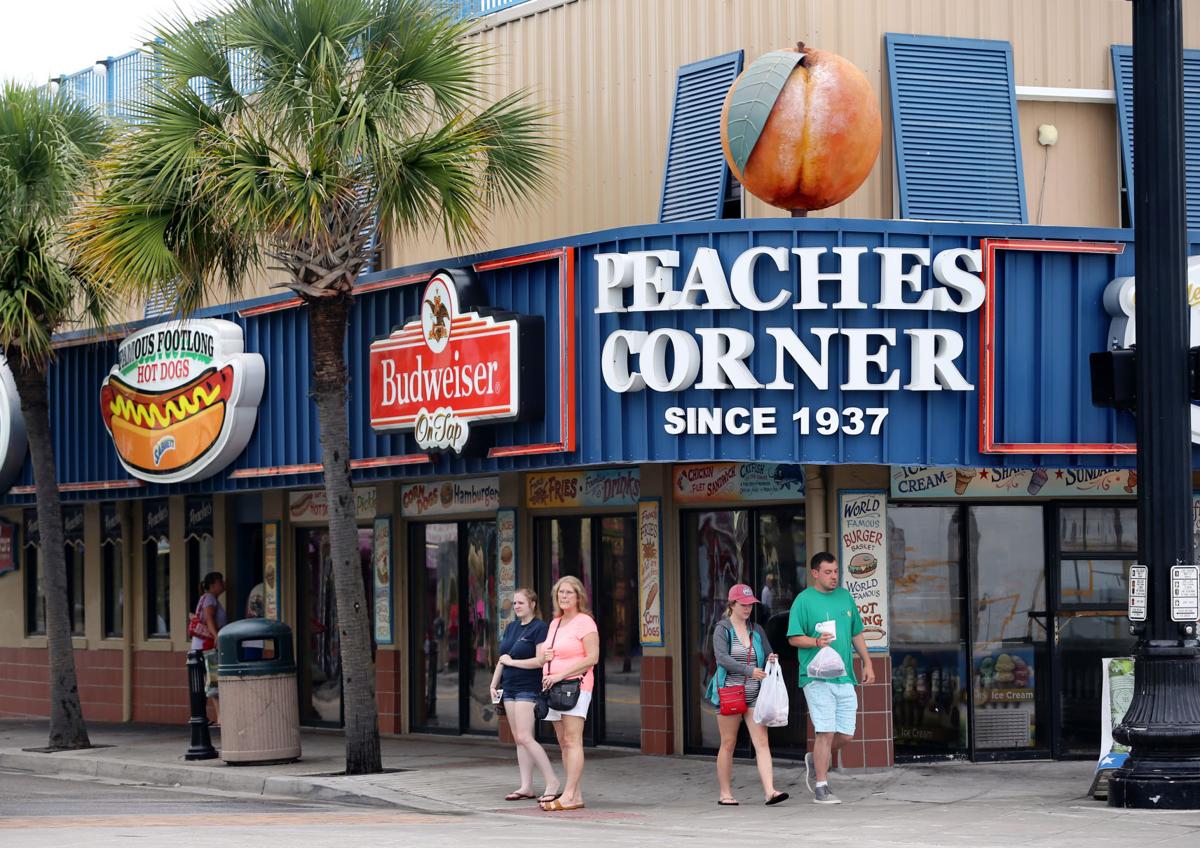 Peaches Corner is a Myrtle Beach landmark older than the city itself. File/Grace Beahm Alford/Staff 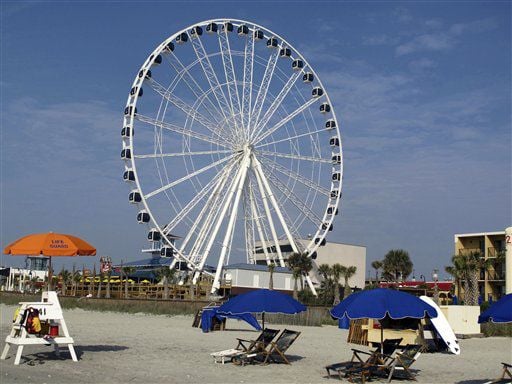 The 200-foot-tall SkyWheel is seen from the shore in Myrtle Beach. The Ferris wheel started spinning Friday, May 20, 2011. AP/Bruce Smith

Peaches Corner is a Myrtle Beach landmark older than the city itself. File/Grace Beahm Alford/Staff

The 200-foot-tall SkyWheel is seen from the shore in Myrtle Beach. The Ferris wheel started spinning Friday, May 20, 2011. AP/Bruce Smith

Forever is a mighty long time.

If you ask anybody from Myrtle Beach how long Peaches Corner has been shushing the growling stomachs of beach-goers from its spot at Ninth Avenue and Ocean Boulevard, they’re ever-so quick with a response: "Forever.”

To be more specific, Peaches Corner is one year older than city of Myrtle Beach, which makes it 81 years old. Not much is known about the Peach family, but its members showed brilliance in realizing that their slowpoke beach town in summertime lazily squirms out from under a damp piece of driftwood like a glow worm, pulsating neon.

They also realized that foot-long hot dogs make people happy and it’s impossible to devour a double patty cheeseburger with a frown on your face.

Johnny and Eunice Burroughs purchased the place from the Peaches around the time Marines had Japanese troops retreating from Guadalcanal in World War II, and ownership has trickled down the family tree since. In the day of behemoth restaurant groups, coming across this type of operation is like finding a Buffalo nickel in the cushion. It's a mom-and-pop, aunt-and-uncle, cousin-and-cousin, sister-and-brother-in-law type of spot.

Even with all those Burroughses involved, the place is still called Peaches simply because Johnnie and Eunice both thought it sounded a lot more appealing. Nothing much else has changed about the place.

There have been a few minor facelifts and a small wooden patio has been added to catch the overflow, since the main room is as snug as the quarters of submarine. As it gets packed and the mood gets boisterous, a row of ceiling fans circulates the aroma of saltwater, chlorine and bubbling grease.

In the olden days, the garage doors stayed rolled up all day to allow the bells, whistles, dings and doinks and zany characters from the boardwalk to spill in. Those garage doors have since been replaced by sliding glass ones that mostly stay shut to keep diners cool, but the modification doesn’t obstruct the view of the SkyWheel sharing the horizon with pelicans and a couple of construction cranes finishing up more penthouses.

What makes these hot dogs and hamburgers "famous" enough to bring families back summer after summer? First off, the hot dogs aren’t those one-part pork, one-part poultry, one-part unknown origin. Their pedigree is kosher and all-beef: Sabrett brand hot dogs to be exact. So even if they’re sentenced to float in spent water before being chomped down, they still have a snap and burst of flavor to them. Standard dress code is mustard, chili and onions.

No, the roughly diced onions aren’t of the heirloom variety. No, the mustard isn’t a small-batch Dijon. Yes, the chili’s recipe is coveted and older than anybody you're likely to have in your call log. Yes, you’re likely to come off as a pretentious buffoon if you ask for a fork and knife.

The ground beef burger never sees the inside of a freezer, just the sizzling hot surface of a griddle before each patty is blanketed with two slices of standard-issue processed American cheese, shredded lettuce and a couple of tomato slices, then tucked into a squishy sesame-seed bun.

The back half of the menu epitomizes boardwalk grub. It’s deep-fried stuff: pickles, Oreos and catfish. Southern nachos festooned with pulled pork, sour cream, cheese and jalapenos are sloppy, as they should be, and the milkshakes have the viscosity of cold molasses. Can it get any better, breezier, messier, hotter or stickier?

This is what fed the gleeful ethos that's indelibly airbrushed in hot pink and royal blue bubble font in my mind, along with the rickety Mad Mouse roller coaster, the Kremlin-themed Siberian Sleigh Ride, the twirling teacups and whimsical carousels.

It seems like every member of the family has had a chance to saddle up, twist the reins around their fists and lead Peaches Corner into another summer. All of them understand shameless kitsch is Myrtle Beach’s modus operandi.

And all of them know these things to be true: Cranky toddlers love chocolate chip pancakes. Moose Lodge members are happiest at epic Calabash buffets where anything with a shell or scales is deep-fried and smothered in tartar sauce. Couples celebrating their eighth wedding anniversary love to be dazzled by onion volcanoes and hibachi shrimp, the same way 14-year-old boys marvel at the swashbuckling shenanigans of Pirate's Voyage while ripping apart a Half-O-Cackler with their bare hands.

This time though, it’s Clay’s turn to jockey, riding Peaches Corner down the final furlong of tourism supremacy. Clay’s path back to the boardwalk has been international, bi-coastal leap-frogging.

After leaving the College of Charleston in 2010, he took the Spanish he'd studied and headed to Nicaragua, working as a camp guide helping surfers seek out the best point breaks. From there, he ended up on the left coast in Santa Cruz, Calif., surfing and working at East Cliff Brewery, before loyalty brought him back to Ocean Boulevard.

The very first time we spoke, in a thick Carolina drawl, he brashly made sure I knew the significance of Peaches Corner: “If we leave, the heart and soul is gone.” His goal is to nudge Peaches Corner forward without losing its vintage quirks and food that made it “world famous.” The rotating peach isn’t going anywhere. Neither is the barracuda that still hangs above the cash register, caught by his grandmother, Eunice.

The beer snob in him is pushing for a refreshingly tart shandy from the local microbrewery to accompany the familiar Budweiser that flows from a tap into clunky frosted goblets. The old-timers may feel a bit apprehensive about the fancy-pants craft brews, but they’ll have to realize that beers aren’t 10 cents a mug anymore. Blue-plate specials for fresh flounder may find their way onto the menu.

A glance at Clay’s passport may lead many to think his latest stop is just another short-term gig; maybe he’s likely to soon jump ship and end up back in Central America. But when we talked, he said the word “family” too many times for me to believe he’s about to go searching for the next perfect wave in Costa Rica. By birthright, and with unbridled dedication, he’s wiggling his feet into those stirrups and setting the pace not just for Peaches Corner, but an entire city.

James is food journalist in Charleston. Reach him at drejameslxxxvii@gmail.com, or follow him on the streets of Charleston or whatever city he’s in.