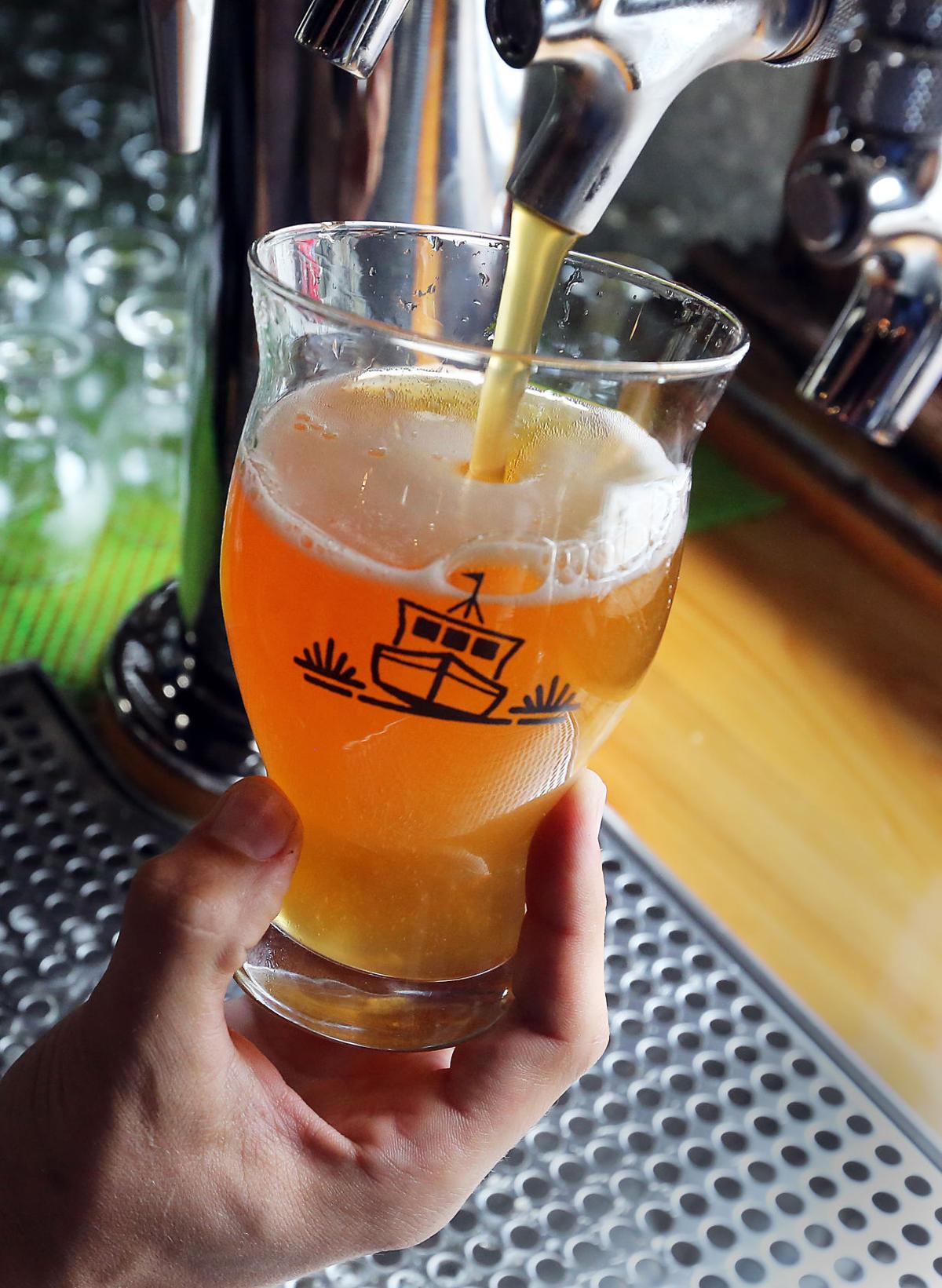 Low Tide Brewery on Johns Island was the site of a dog bite in late October 2019. File/Brad Nettles/Staff 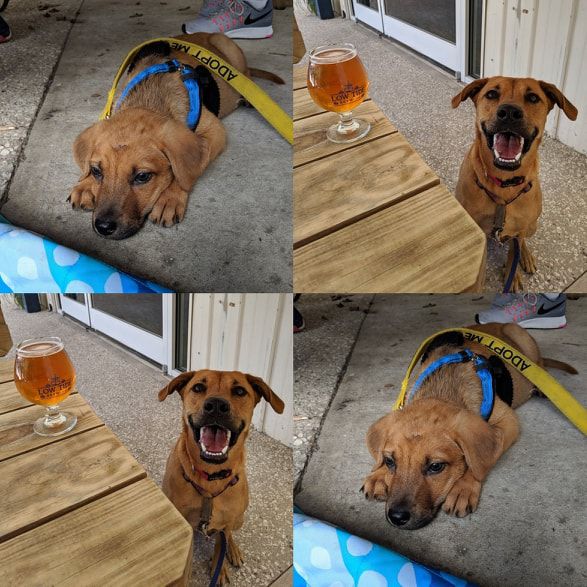 The photos, posted to Low Tide Brewing’s Instagram account on back-to-back days in the run-up to Halloween, could have almost passed for satire.

First: An adorable pug in a unicorn get-up, accompanied by an announcement of a dog costume contests.

Then: A flier with a cartoon dog paw behind one of those red “no smoking” symbols. “PETS ARE NO LONGER ALLOWED IN THE TAPROOM,” it blares in block caps.

Joke, punchline. Shot, chaser. But the event that precipitated the about-face was no laughing matter.

Briefly: On the night of Oct. 26, with the popular Johns Island taproom comfortably filled with patrons and their four-pawed charges, a woman leaned down to pet a dog. From behind her, another dog leaped up and sunk its teeth into her arm. The resulting wound, a brutally deep gash in the neighborhood of her elbow, would require 50 stitches, according to a GoFundMe page the brewery created to help with her medical bills.

I wasn’t at Low Tide on the night of the incident, but it got me thinking. Craft breweries have been de facto community hubs in the Lowcountry ever since halfway through this decade when a series of reforms loosened the restrictions on what, how and how much they were legally permitted to serve.

Charlestonians (me included!) love beer and dogs. So it’s only natural that a community hub that makes and serves beer would become a premier destination for Lowcountry dog owners.

“We have such great outdoor venues where people can just hang out and have a drink and have their dog," said Brian Foster, publisher of Lowcountry Dog, a digital magazine covering … well, you know. Indoor venues, too: breweries without Department of Health and Environmental Control-approved kitchens can allow pets inside. (Low Tide, until recently, was known and loved for this.)

“People love to take their dogs out,” he said.

That poses a toothsome predicament for breweries that sometimes turns gruesomely literal. The Lowcountry’s beermakers have embraced (and economically benefited from) their central role in community life. At the same time, as businesses, breweries have to provide a safe environment for customers.

In the middle, there are dogs: Mostly safe and wonderful creatures that can, nevertheless, cause harm. South Carolina ranked 19th in the nation for dog-bite insurance claims in 2018, according to State Farm. That's close to middle of the pack. But Lowcountry breweries have often found themselves in the jaws of canine complication even so.

A leashed Rottweiler bit a 75-year-old man on the upper thigh as he walked into Fatty's Beer Works, a 2017 police report shows. The owner reportedly left the scene without assisting the victim, who sought hospital treatment for a puncture wound and rabies. The brewery, which reportedly assisted the victim on-site, didn't respond to a request for comment.

Holy City Brewing Company banned dogs from its Dorchester Road premises in 2018 after a series of dog-bite incidents spanning several years. They confirmed the incidents and the policy, but declined to discuss the issue further.

After what COAST Brewing's co-owner Jaime Tenny described as “a small bite (that) made us very nervous," that North Charleston brewery prohibited pups, as well.

"It was a very tough decision as we always loved having dogs visit, including our own, but safety comes first," she told me via email.

Even before the Halloween fright at Low Tide, Fielding had been reconsidering the brewery’s famously dog-friendly policy.

“It's tough because we're trying to strike a balance. When we first started, there wasn’t even a leash rule,” he told me. “It was always something on my mind.”

It's a vexing challenge, especially since for some Charleston dog-owners, a blanket ban on Canis familiaris could be the difference between patronizing a taproom or passing on it.

“We had such a huge following with people who enjoyed bringing their dogs that we knew business would take a hit if we stopped allowing them. … To a degree, we felt like our hands were tied,” said Karen Biggs Easterby, the former co-owner of West Ashley’s dog-friendly, now-shuttered Craft Conundrum beer bar. (It wasn’t technically a brewery taproom, but because it had no kitchen sort of operated like one.)

Pouring beer made by Lowcountry women? That's the BREWSTER way.

“During the warmer months, people liked having somewhere to go that allowed pets inside,” she said.

One of those people was Kelly Conrad, a Mount Pleasant resident.

“Craft Conundrum, rest in peace,” she said with a sigh.

Access to a dog-friendly indoor space is “at the top, absolutely” of her priority list when choosing where to drink, Conrad told me. She actually adopted her shepherd mix, Steven, inside Low Tide’s taproom last summer. Now Steven would be pup-sona non grata there.

“Having a place when the weather gets to the extremes here, you don't want to go sit outside, it's really important for me,” Conrad said.

When she leaves Mount Pleasant on social outings, she’s usually got Steven in tow, so dog-friendliness is a crucial amenity. If Low Tide’s policy stands and dogs aren’t ever permitted back inside the taproom, Conrad said her visits would be infrequent (out of convenience, not spite.)

Other owners see no merit in going to a brewery at all if they can’t bring their furry friend.

“For me, there's no reason to go to a brewery just by myself,” said Hal Clay, a Low Tide patron who estimates his Bernese mountain dog, Guinness, has posed for at least 100 pictures at the taproom.

“The dog experience is the ambiance,” he said.

Because Low Tide has no outdoor bar, and he is single, he’d have to leave Guinness outside unattended to get himself a beer, a concerning prospect.

“Dogs do get stolen, especially if you have a dog that's unique,” he said.

Fielding was mostly sympathetic to the indoor/outdoor problem, and told me he's working on it. Still, Clay's complaint seemed to frustrate him.

“I started this business to make really great craft beer, not to give single dog owners a spot to drink where they can do whatever they want,” he said with a note of exasperation. “With the goal of making everyone happy, you're gonna piss some people off.”

It's a dilemma that dogs (!) the area's brewers, even those that haven't faced an incident on their own premises.

“In the last few years, a lot of breweries in town have had to change their policies and prohibit dogs because of incidents like (the one that happened at) Low Tide,” said Brook Bristow, the executive director of the South Carolina Brewers Guild and an attorney at Bristow Beverage Law.

South Carolina has a “strict liability law for dog bites” that places virtually all legal responsibility for a dog’s actions on its owner, he told me, but he expects that more breweries will follow Low Tide’s lead.

"If folks cannot be responsible by leaving aggressive, unsocialized and untrained pets at home ... we would most definitely need to rethink our policy," said Hank Hanna, proprietor of North Charleston's Commonhouse Aleworks. The Park Circle brewery permits leashed dogs in its popular outdoor lot. "We truly hope that does not become the case," he said.

Just down the road at COAST, Tenny echoed the emphasis on owner negligence.

“I think there's so many bad owners that want to bring their dogs out, but don't take the responsibility of drinking alcohol or knowing their dogs,” said the Johns Island resident and self-identified “dog advocate.” His five dogs have grown up at Low Tide “since puppies,” he told me, and he was disappointed that they’d no longer be welcome indoors.

What if breweries banned certain breeds that are considered by some to be more aggressive, like Rottweilers, pit bull terriers and the like? I asked Peppers, having been just pitched the idea by Hal Clay.

“I’m not a fan" of that idea, said Peppers, noting that one of his dogs was an American bully pit bull. "This is not the dogs. It's definitely the owners.”

In Low Tide’s case, a ban on specific breeds might not have been effective anyway. The Charleston County Sheriff’s incident report listed the offending dog’s breed as yellow Labrador. According to a 2018 DogBites.org study, Labrador retrievers were responsible for 2.1 percent of dog-attack fatalities from 2005-2017; pit bull terriers, 65.6 percent.

There's a lot more to this debate (which, as I understand it, is a fairly heated one in dog-ownership circles), but this column is not about the civic science of pet policy. It's about drinking in Charleston. And therein lies the problem. Some owners are irresponsible, statistics don't tell the whole story and the stakes are high. How can a Charleston beermaker, on top of all the work required to make and sell beer in this competitive market, ever hope to find a happy medium on hosting hounds?

Downtown Charleston’s Tradesman Brewing Company might have an answer. In 2018, as the brewery was getting ready to open, vice president of operations and co-founder Sara Gayle asked Brook Bristow to draft them a waiver for what would become the brewery’s “Growler Club.”

The club is essentially a dog registration system: Owners pay a $10 annual fee and provide medical documentation on their dogs to Tradesman in exchange for a collar tag that indicates they’ve been properly ... wait for it … vetted. (Sorry.)

To date, there are around 180 members, and Gayle told me there’s been nary an incident.

“We might have to do away with it because one day it might not be enough, but fingers crossed it doesn't come to that,” said Gayle.

Conrad, Peppers and Clay all expressed hope that Low Tide and other breweries implement a policy like this in the future. Bristow, who does not represent the Johns Island brewery, said that several of his existing clients had already approached him about potentially replicating Tradesman’s Growler Club.

“Hopefully, something good comes out of this,” he said.

On Maybank Highway, Fielding and the Low Tide crew are hoping so, too. They're brainstorming ways to solve the whole "getting beer outside" problem. The leading idea, he told me, is an " '80s-style McDonald's drive-thru" window from which dog owners can order beers with Fido in tow.

Plus, they're raising funds to help cover the victim's costs. Responding to some critical speculation on social media, Fielding assured me that all the money raised through the page will go straight to the victim (not to any of the brewery's own legal or insurance costs, should those arise.)

“It’s just a tough situation," he said. “We’re just trying our best to do the right thing.”

A $221 million deal with Anheuser-Busch InBev includes this brewer from Boone, NC.