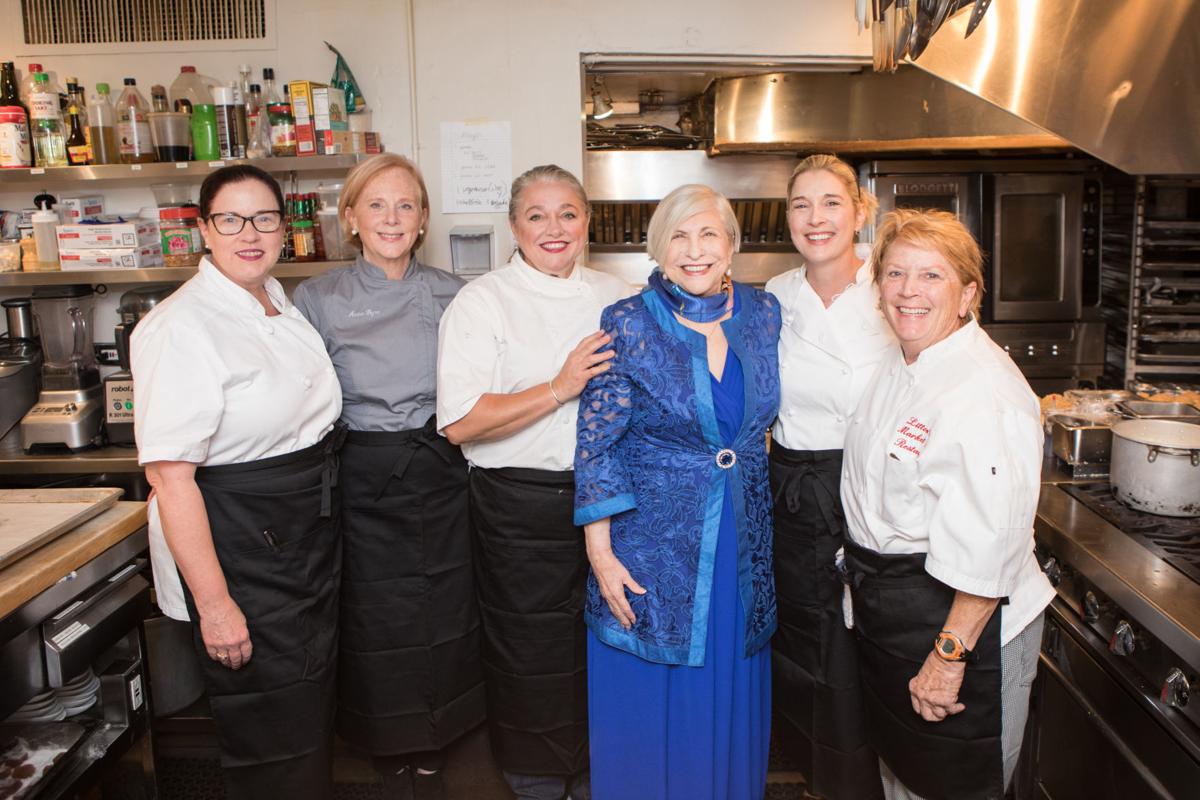 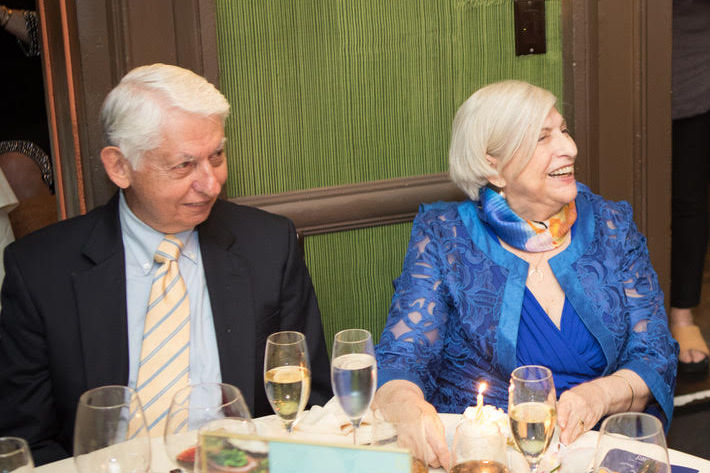 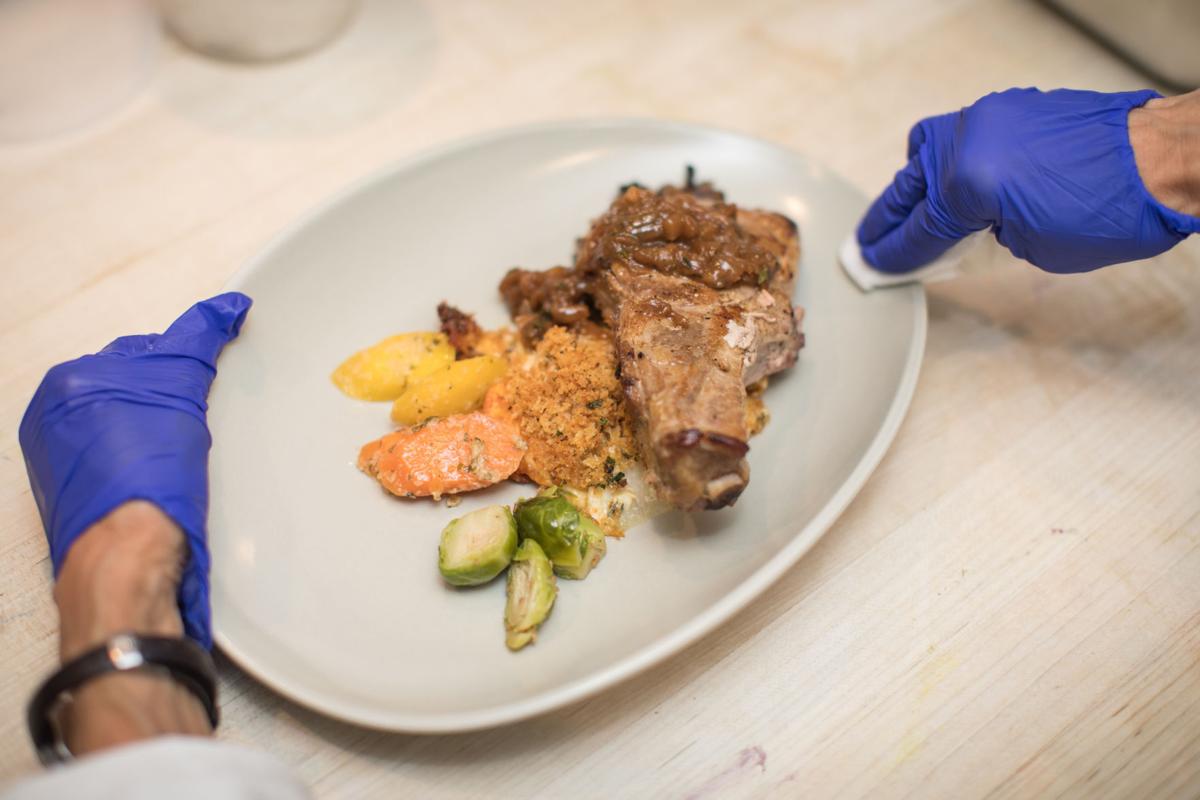 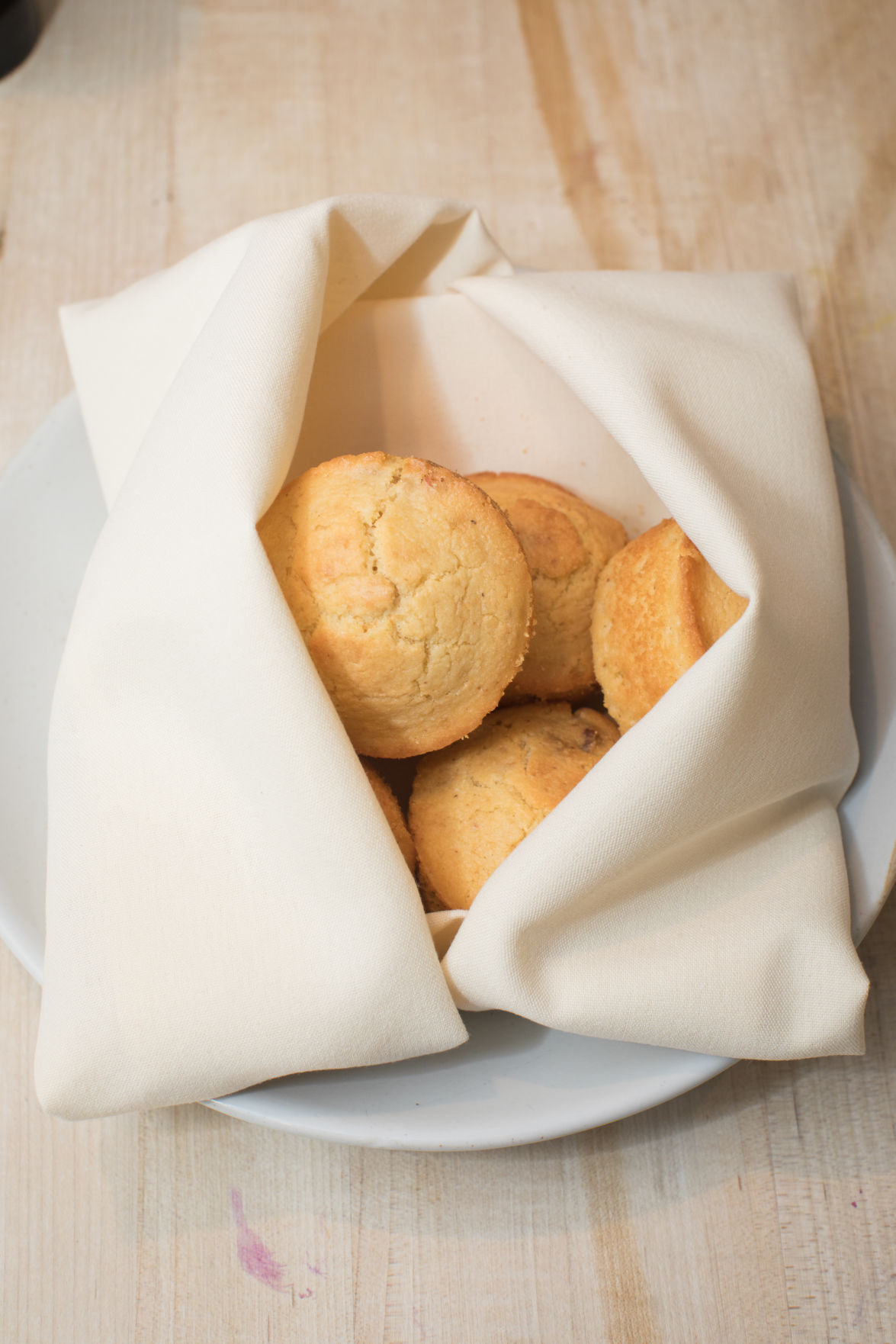 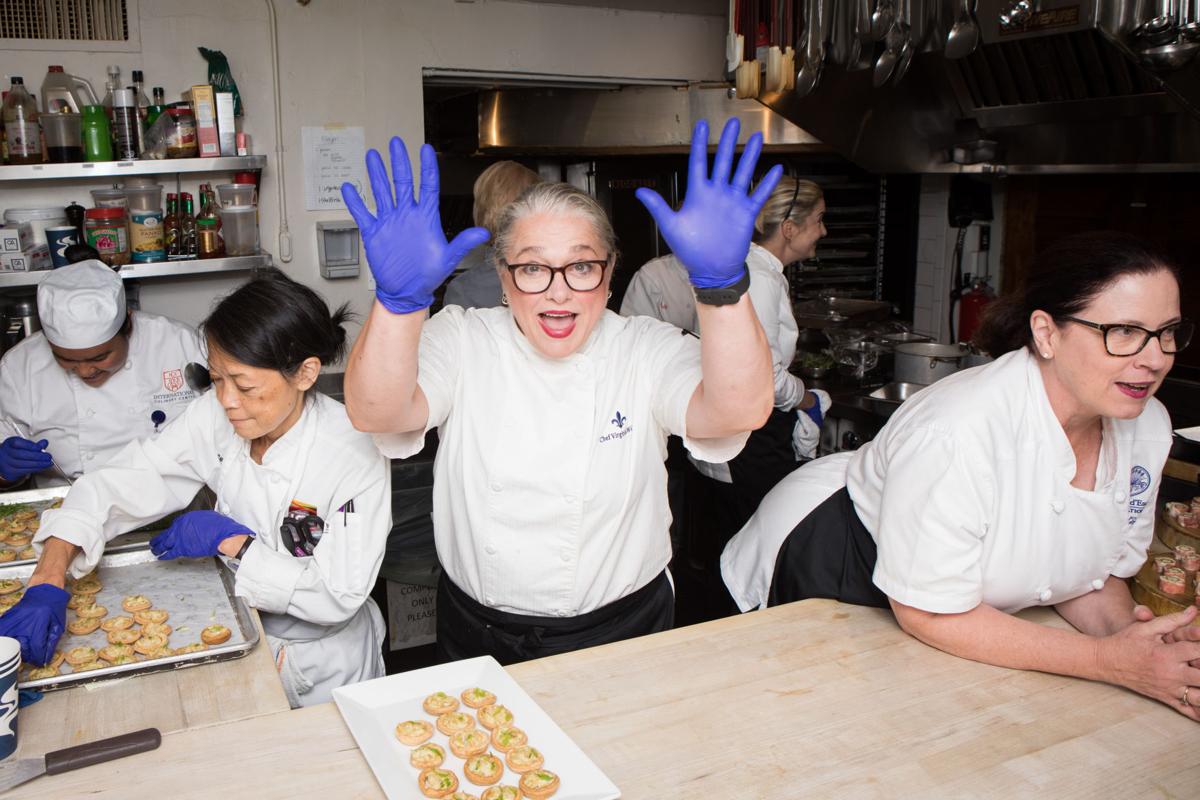 Chef Virginia Willis (center) was part of the team that presented a birthday dinner for Nathalie Dupree at the James Beard House. Clay Williams/James Beard Foundation/provided 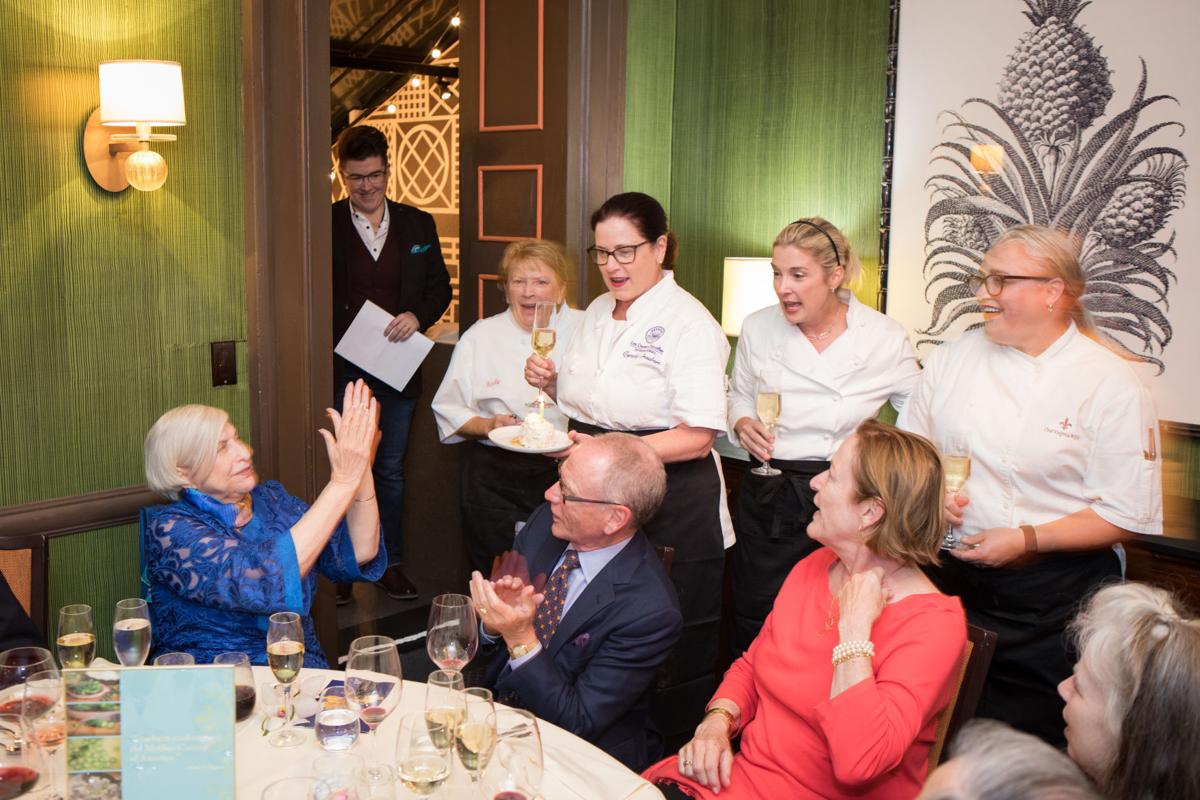 NEW YORK —There was no doubt that the pork chop theory was going to be quoted at a Saturday night tribute dinner for Nathalie Dupree, the Southern cooking legend and Charleston resident who will turn 80 two days before Christmas. (“Nobody ever wants to come to a birthday party then, and the girls knew this,” Dupree said of her mentees’ decision to throw her “birthday celebration” at the James Beard House in October.)

The pork chop theory is so central to Dupree’s philosophy that the meal’s main course was a bone-in chop, embellished with apples, onions and mushrooms cooked in a cast-iron pan. The meat was a reminder that at a time when women’s fight for professional opportunities had neither the law nor public opinion on its side, Dupree came out forcefully against the inclination of some to jealously guard the knowledge and connections that had contributed to their success.

A lone pork chop dries out in the pan, she pointed out, but two chops will feed each other fat and emerge the better for it. It’s a bit like the kitchen equivalent of a rising tide lifting all boats, if the boats were responsible for tide height.

Dupree told diners at her sold-out party that the theory dates back to when she and Shirley Corriher were both in the running for the presidency of the International Association of Culinary Professionals, an organization that Dupree helped create. “She came up with the theory,” Dupree said. “She says I did.”

It was fitting that Dupree didn’t claim outright credit. Dinner organizers and attendees alike cited her unstinting support of other women in the field as inspiring.

Nathalie Dupree shows you how to save time, money and plastic with homemade egg breakfasts

“She wants people to know what I do, and she encourages that work," Tipton-Martin said. "She gave me the confidence I could make a contribution to Southern food even though I was not Southern.”

Dupree was born in New Jersey, but lived in various places around the South while growing up, including Virginia and Texas. She discovered her passion for food while in college, when she was assigned to take over a dorm cook’s job.

Her debut dish was tuna noodle casserole. She obediently tripled all of the ingredients in the recipe in order to yield enough for everyone expecting supper, but didn’t then realize that the cooking time had to be adjusted, too.

Since most of the dinner guests at Dupree’s party were either experienced cooks or grateful partners of the same, the crowd saw where this story was going. “I had a layer of fat and layer of globby white sauce,” said Dupree, looking properly resplendent in a peacock blue dress and Parisian scarf. “So I put toast in the oven and opened a can of La Soeur peas and called it tuna a la king.”

When Dupree later started teaching cooking classes out of her restaurant in Social Circle, Ga., following coursework at the Cordon Bleu in London and a stint as restaurateur in Spain, she prided herself on students making mistakes. “It’s one of the things I’ve always loved,” she said, noting that getting everything right isn’t as instructive.

Susan Rice was one of Dupree’s first students. She came to Dupree as a self-taught cook, a role foisted upon her by her mother, a devoted crossword puzzler. “She would say, ‘I don’t know when this puzzle will be done, so if you want dinner, go ahead and fix it’,” Rice recalled.

But it hadn’t occurred to Rice prior to studying with Dupree that there was a creative aspect to cooking.

“I never knew anyone who was really artsy,” she said, adding lovingly, “She’s a real slob in the kitchen.” (Dupree has bestowed the title of "best dishwasher" on Rice, much to the good-humored consternation of Dupree’s husband, Jack Bass.)

From Dupree, Rice says she learned how to gently help other cooks along without shaming them. Many times since that class, she’s gone to a friend’s house for dinner and said, “That’s an interesting way to prepare that. When you serve it, you might want to do it this way. And don’t panic.”

Nobody here but us chickens

Award-winning cookbook authors Cynthia Graubart and Virginia Willis led the group of chefs preparing Dupree’s dinner at the James Beard House, which served as Beard’s private home before it became the backdrop for culinary extravaganzas on a nearly nightly basis.

Graubart and Willis were joined by Anne Byrn, Rebecca Lang and Kelly Litton in putting together a menu that featured riffs on some of Dupree’s best-known dishes, including a bi-colored beet soup, chicken salad studded with pickled grapes, bacon-flecked cornbread and Crosby’s shrimp over a bed of Geechie Boy grits.

“This is the best party we’ve had here, and this is not a joke,” the James Beard Foundation Director of Women's Programs Stacy Carroll said in her remarks. “The kitchen was run like I’ve never seen it run before, and that’s because it was run by women.”

In the printed menu booklet laid at each place setting along with a sextet of glasses, each of the chefs had a passage outlining her gratitude to Dupree.

Byrn described her as a “funny, sympathetic and encouraging” mentor who introduced her to Julia Child, Marcella Hazan and Paula Wolfert. Lang hailed her as a therapist and cheerleader. Litton chose the term “culinary mother.”

“She took me under her wing ... pointed me in the direction that would best suit me (and) kicked me out of the nest,” Willis wrote, alluding to the affectionate term that Dupree uses for her proteges: Chicken.

According to Dupree, her former student Marilee Johnson came up with the phrase. Johnson denies it.

“I just had a friend make her a stained-glass piece with chickens representing me and my two fellow classmates,” says Johnson, who signed up for Dupree’s cooking class at Rich’s department store in 1984 and remembers being called a chicken from the start.

“It was just wonderful,” Johnson says. “We made peasant bread and French onion soup on the first day, and I cried because of the onions. And we only had a tiny little workspace because Nathalie taught us that the more space you have, the more space you’re going to use.”

The kitchen at the James Beard House is notoriously minuscule, but “The Chickens” still managed to produce individual portions of coconut cake; caramel cake and chocolate cake drenched with Coca-Cola. Each guest was arbitrarily served just one of the three, so if people around the table wanted to experience the entire dessert spectrum, they had to share the fat.